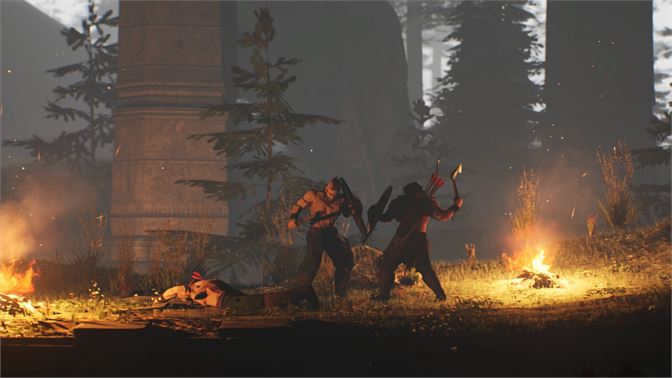 If you look up the word Saga on Google you will no doubt be looking at an over 50’s travel company and insurance firm. If you scroll down a bit though you’ll discover an entry for the now infamous excellent sci-fi graphic novel series. We know the word, we kind of know what it means. But where did it come from? Well, it’s an old Norse word that commonly means ‘story’, ‘tale, or ‘history’ from Iceland. There are often tales of heroes or legends or kings. With Song Of Iron, I think it’s safe to say that the journey that the developer takes you on is a modern-day saga; one that will excite and delight in equal measures.

Song of Iron falls into that amazing genre of games that have been created by a single developer. And it’s a game which has managed to create a bit of buzz and for that reason I was excited to see what the fuss was about. I haven’t been disappointed at all.

It places you into the world of the Vikings, as you play a Viking hero whose whole family and village have perished. It’s up to you to go on a journey to find the Great Temple of the Gods and save your people. But there is a long road ahead…

The story and atmosphere of the world are superb throughout. Song of Iron is told without many words and the narrative is completely visual, but that doesn’t lessen the experience and understanding of what you encounter in the world. Through this sense of narrative and wonder, I had the same kind of feeling as I had when I played Inside for the first time. I felt I was part of a huge fast flowing adventure, one that is framed by beautiful landscapes and dark scary underworlds. What could be better?

The gameplay takes you through a side-scrolling adventure, much like the recent Unto The End. Your warrior moves to the right, heading forth on their adventure ass you jump, roll and run, picking up weapons and a shield as you go. The first thing to get used to though are the controls, mostly as the buttons being utilised are completely different from what you would usually be used to. It takes a bit of getting used to before it becomes natural.

Soon into Song of Iron you’ll find yourself on the end of an attack, and this is when combat kicks in. You can pick up any weapon off the floor and collect more from your fallen enemies. Huge axes and swords are just some of the tools for your entertainment. The combat works as you would expect though, involving attacking, defending, rolling, and a massive spartan-type kick to knock your enemies over. Yet there will be times when you are overwhelmed with foes and there is most certainly a need to learn when to attack and when to run. You get access to a bow and arrow as you progress too, and this helps take out foes from distance. I have loved the battle system of Song of Iron; it feels natural, fluid, and easy to master and has been able to provide a system that is hard to get bored of.

Song of Iron isn’t all about fighting though – it’s also about exploring and puzzle-solving. The puzzles come in the form of moving blocks so you can reach additional places, or lighting up a selection of runes that are hidden to unlock a doorway. There are special abilities that you can find in treasure rooms too, and these add extra power to your warrior. Further is access to a dash ability, lightning, and fire buffs for your weapons and extra amour. There are also traps to avoid like swinging giant axes in certain sections.

Visually the game is played out as a side scroller in a 2.5D world, with stunning environments throughout; from the background vistas to the way the trees move in the wind, all is great here. Lighting and textures are extremely good too and Song of Iron has been able to provide a world that is a joy to spend time with – even if much of that time is spent running at high speed to escape a horde of enemies. It’s a feast on the eyes from start to finish. Yes, it’s not perfect and there has been the odd glitch here and there, but honestly, these have been nothing to write home about. The audio is great too – full of grunts and swords clashing, whilst powered by a powerful soundtrack underneath.

Song of Iron will get its hooks into you, refusing to let go until you reach the end. Yes, there are some weird control configurations to get used to and at times you may find yourself lost and confused, unsure what to do next. But there is an overwhelming feeling of being involved in a huge epic saga throughout; one that is grand, sweeping, and brilliantly executed.

Song of Iron is a game that demands your time so grab your axe and come out swinging.