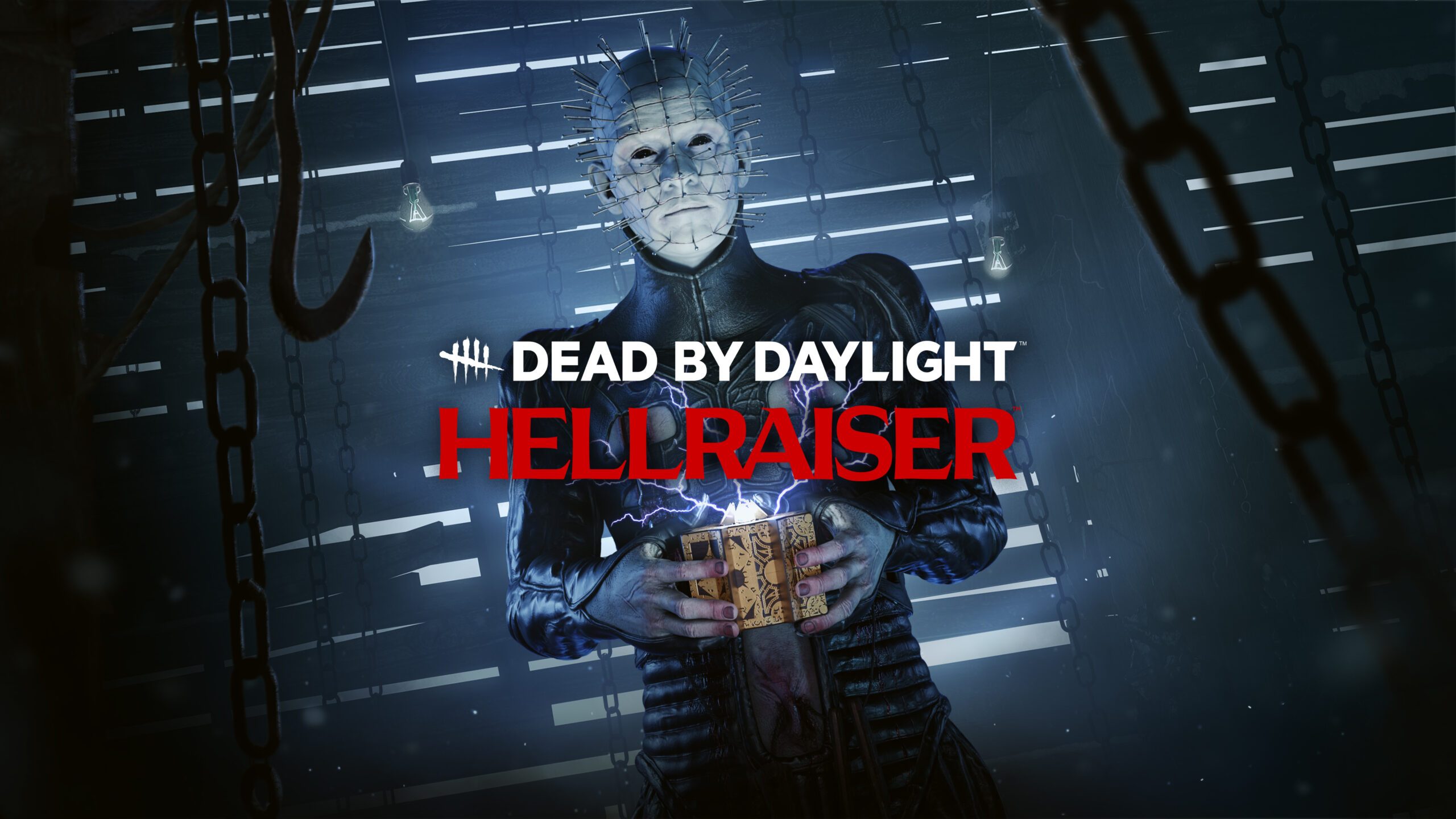 Hello, People of the Fog!

If one were to create a Mount Rushmore of 80s horror icons, you’d be hard-pressed not to include Hellraiser’s Pinhead on the side of that cliff. Even though, let’s face it, he’d be an absolute nightmare to sculpt.

Few villains can claim to be as memorable, prolific, and downright original as this staple of horror cinema. All the more reason it was so important to do Pinhead justice as we welcomed him into Dead by Daylight.

We tapped our creative team to shed some light on the process, the pleasure, and the pain of taking everything that makes Pinhead unique… and translating it into a video game.

The Hellraiser Chapter is available now in Dead by Daylight! 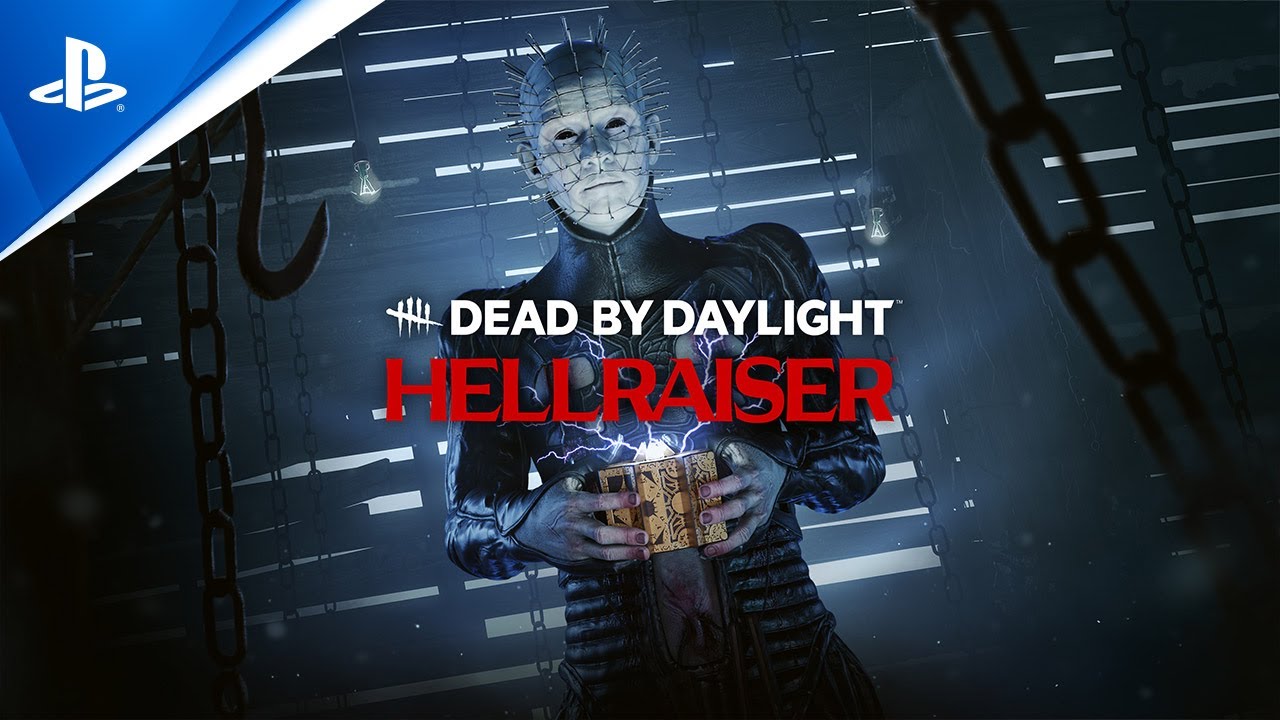 Calling Pinhead “recognizable” is an understatement, and no matter how fun the apex Cenobite might be to play, if the look and feel isn’t right, the fans’ connection to the character is lost. Getting it right starts with the source material.

“We watched and rewatched that original movie again and again to try and make sure our movements and behaviors in-game rang true with Pinhead,” shared Animation Director, David Prenoveau. “After discussion with the design and art teams, we tested these movements on an existing Killer – The Trapper – to make sure we could actually feel that very specific Cenobite vibe coming through even on another character model.”

It’s said that during production of the original Hellraiser, explicit direction was given to Pinhead to subdue his movements and gestures. The goal was for the character to maintain an aura of complete control at all times. The challenge then fell to David and his team to translate that same essence into Dead by Daylight, where Killers need to be very mobile.

“Pinhead is very stoic in the first two movies. His movements are restrained and effortless,” explained David. “We just couldn’t imagine him doing things like kneeling down to pick up Survivors and tossing them over his shoulder. Afterall, he’s the high priest of Hell, he shouldn’t bend a knee for any reason!”

“In DbD we have a basic set mechanics that are common to all Killers like picking victims up and tossing them onto hooks. For every single one of these we asked ourselves ‘how can we make sure this really feels like Pinhead?’ Our answer ended up being to use his chains and hooks as an interaction tool. As the player you control Pinhead’s chains and use them to manipulate Survivors in ways other Killers need to do by hand. We’re hoping this touch makes the player feel even more powerful when they’re playing as Pinhead!” 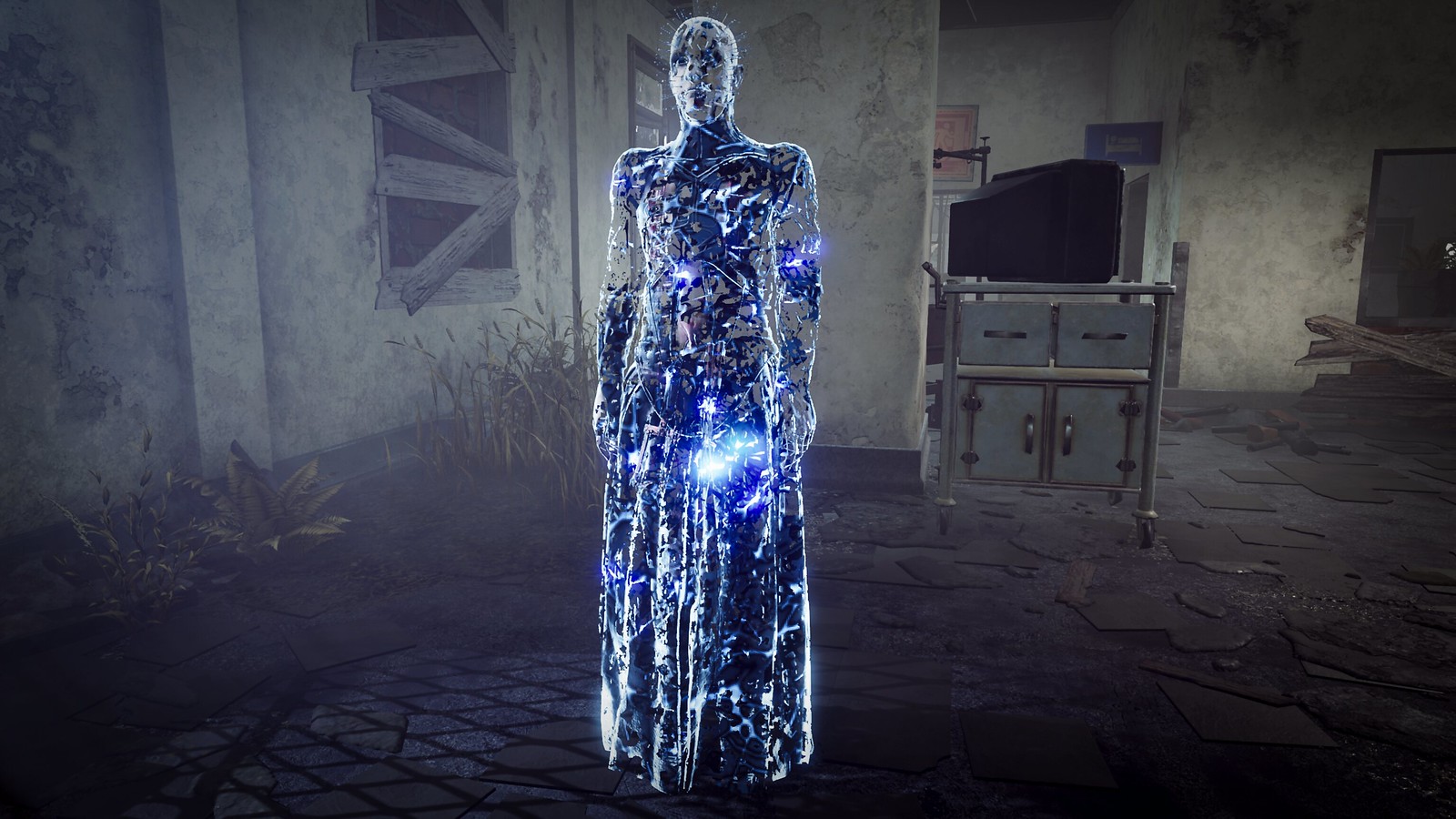 When it comes to animating a Killer in Dead by Daylight, every character poses their own unique set of challenges. According to David, challenges for Pinhead started with his most basic of movements and went all the way to his most brutal animation.

“Just having him walk around was a challenge at first because in the movies he’s not a very fast character but in the game, he needs to move with speed,” pointed out David. “In the end we came up with a compromise that both worked visually, and served the gameplay.”

“Our final challenge was the Memento Mori: Pinhead’s unique killing animation. Using Frank Cotton’s demise in the original movie as inspiration, we incorporated that same body horror into our Mori as chains pierce and stretch the skin of the Survivor’s body and face as they’re dragged away into the Cenobite dimension.”

With the looks, movements, and key animations locked in, the task then fell on the game design team to weave that same authenticity throughout Pinhead’s gameplay. Game Design Director, Matt Spriggens broke down the approach to creating the Hell Priest’s powers and perks in Dead by Daylight and what players can expect when playing as Pinhead.

“The main themes touched on in the original Hellraiser movie were bondage, torture, pleasure, and pain, so it was up to our amazing design team to figure out how to incorporate these into Dead by Daylight mechanics,” explained Matt. “Pinhead’s chains were really the key for us in creating that authentic experience. We incorporated them into almost every aspect of the character from his power to his main weapon to his Mori. It helped bring a sense of thematic harmony to both gameplay and aesthetics.” 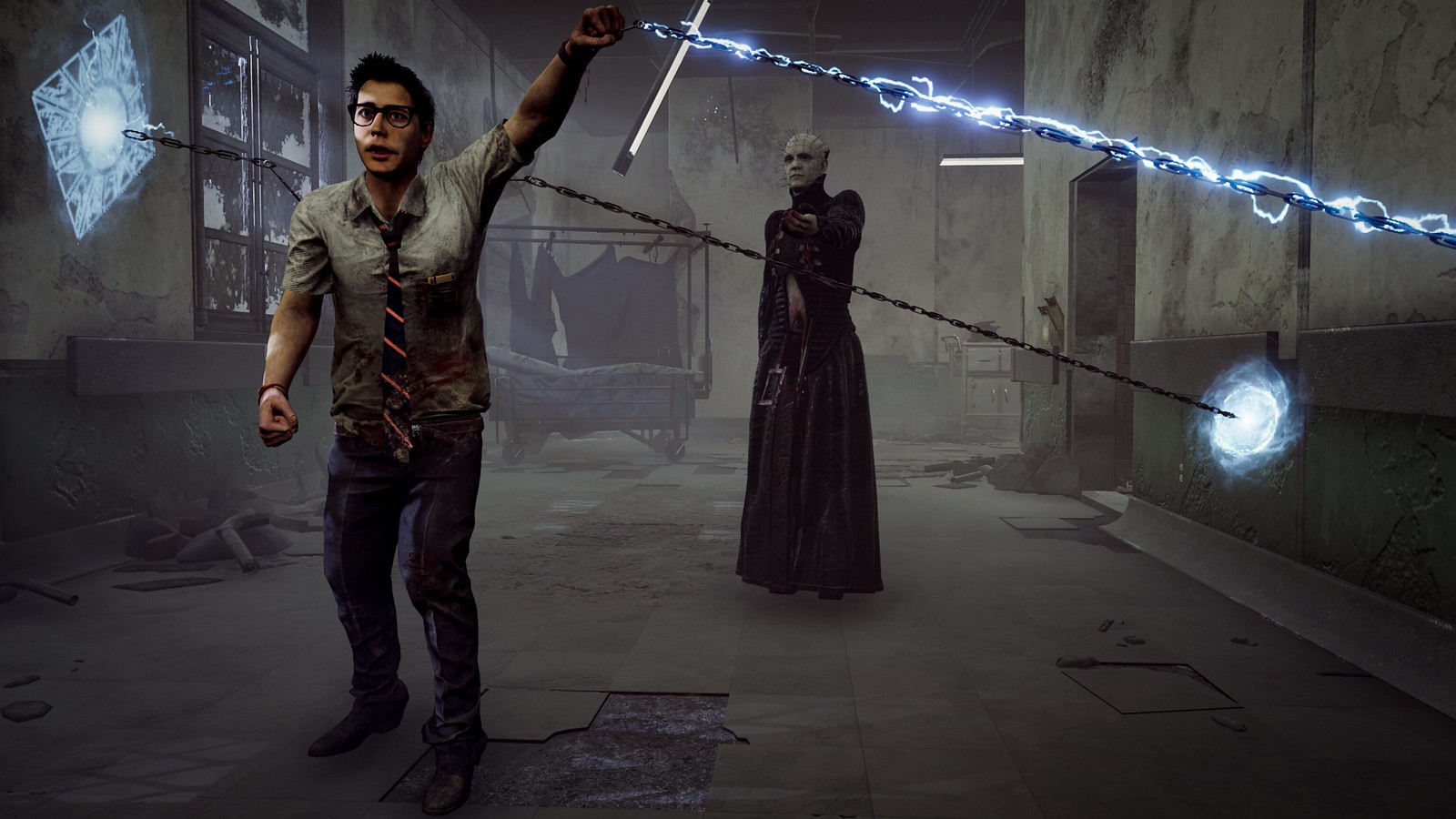 In Dead by Daylight, Pinhead’s main power is called Summons of Pain. Players can open a gateway, summoning a chain from the depths of Hell which they control and guide towards a Survivor, latching onto them and slowing them down.

“This unique power lets players bring an aspect of control to a ranged attack since they get to guide their own projectiles. The biggest challenge for players then becomes mastering the strategies and mind games of where and when to place the gateway to launch the chain,” continued Matt. “One great aspect of this power players might not think of immediately is that you can open a gateway without actually summoning a chain allowing you to scout info without committing to a physical presence in certain areas of the map.”

The game design team then turned their attention to making sure that those same classic Hellraiser themes of pain and torture were well represented in each of Pinhead’s perks for players looking to torment Survivors to the fullest.

Deadlock crushes the Survivor’s hopes by blocking the generator with the most repair progress any time another generator is completely repaired.

Hex: Plaything ratchets up a victim’s suffering by cursing a Survivor when they’re first hooked. The curse applies the Oblivious status effect, meaning that they don’t hear a heartbeat when Pinhead approaches, creating extra tension.

Scourge: Gift of Pain creates several Scourge Hooks around the map that apply negative status effects, Mangled and Hemorrhage, to any Survivor who is removed from one of these hooks. After being healed, their repair and healing speeds are reduced until they’re injured again. 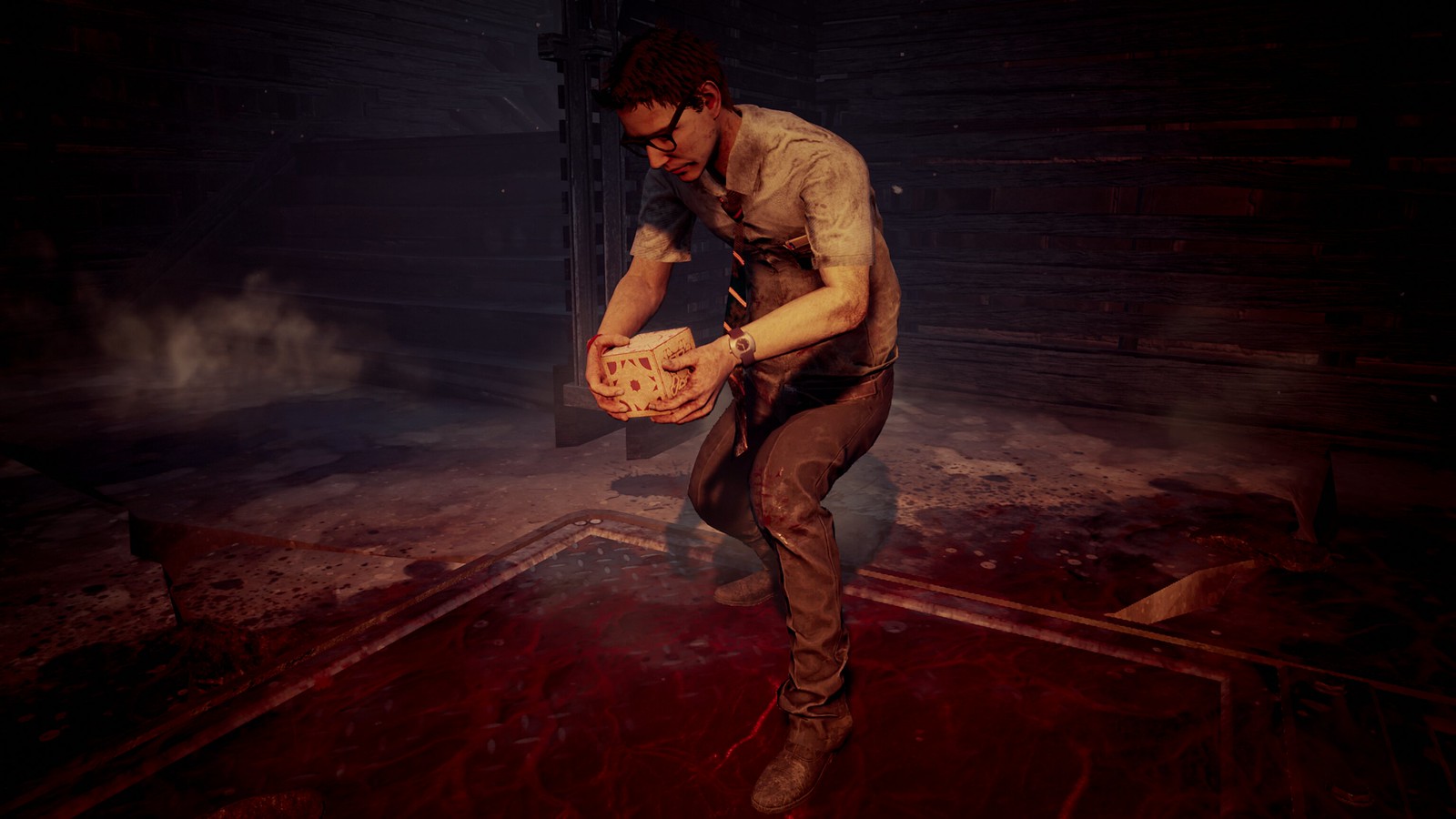 One of the most unique elements of Hellraiser lore has always been the infamous, enigmatic Cenobite puzzle box, also known as the Lament Configuration. The Pinhead experience in Dead by Daylight just wouldn’t be complete without it playing a major role in gameplay.

“We always wanted the puzzle box to be a big part of the Chapter,” shared Matt. “It’s the whole catalyst for the Cenobites coming to Earth after all! Finding a fun, organic way to integrate it into our gameplay while respecting the mythology was the challenging part.”

Whenever Pinhead is part of a trial, the Lament Configuration puzzle box will spawn somewhere on the map waiting to be found by either a Survivor… or The Cenobite.

“As the trial progresses, Survivors come closer and closer to triggering a Chain Hunt. The only way to postpone that threat is if a Survivor picks up the puzzle box. This results in them being threatened by chains until they decide to solve it. If The Cenobite reacts quickly enough, they can teleport directly to the Survivor who has it,” added Matt.

“If Pinhead finds it first, he can trigger a Chain Hunt for all remaining Survivors in a trial. It should be an interesting element of gameplay for both Killers and Survivors to engage with, and it came from exploring a bunch of different motivations for why players would not just want to interact with the puzzle box, but also solve it. We’re really happy with where things ended up as we feel it ticks all those boxes. Pun intended.”

The Hellraiser Chapter will be available in Dead by Daylight today for PS4 and PS5.

See you in the Fog!