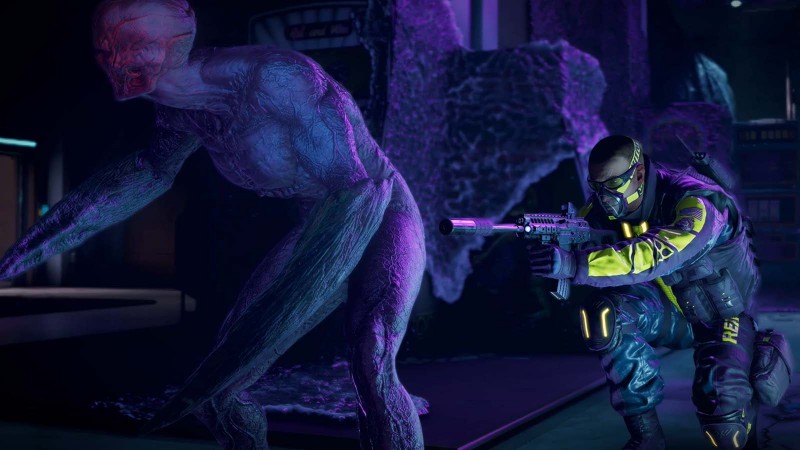 Packed in between huge reveals in today’s Sony Showcase was a reminder that Rainbow Six Extraction is lurking around the corner. After a recent delay into next year, the operators of Team Rainbow are gearing up to defend the world from a threat outside of the typical terrorist organization.

Rainbow Six Extraction builds on what makes Siege great. The player will team up as a chosen operator with a group of other operators, but instead of facing off against another team of humans, Extraction’s enemies are alien in origin. We see shots of the different extra-terrestrial entities skulking around the environments looking to take players down throughout the trailer. Bipedal masses with spikes for limbs and ground crawling beast-like creatures are just the tip of what the Rainbow has to deal with. A creeping black substance spreads around the environment, corrupting everything it touches and claiming it for these alien monstrosities.

Team Rainbow’s operators are far from helpless against the hordes from outer space. Like in the competitive-focused Siege, players have tools of destruction and suppression on hand. Walls are still destructible by taking hammers or ballistic weaponry to them to tear them down. Those same walls are also reinforceable with defensive shielding that can be placed in vulnerable spots.

Rounding out the footage, Ubisoft runs down an impressive list of what players can expect in Rainbow Six Extraction. 18 operators to choose from, 12 maps that change over time, 13 missions to embark on, crossplay, progression, co-op, and the list goes on. The package looks enticing. Rainbow Six Extraction is now releasing in January 2022 for PlayStation 5, Xbox Series X/S, PlayStation 4, Xbox One, and PC.

Extraction is going to be my first foray into modern Rainbow Six, and its ties to Seige are intriguing as an entry point to the more competitive game. Are you a Seige fan and are looking to dive into this new adventure? Or are you new to this version of Rainbow Six like I am? Let me know what you think about this cooperative shooter in the comments.