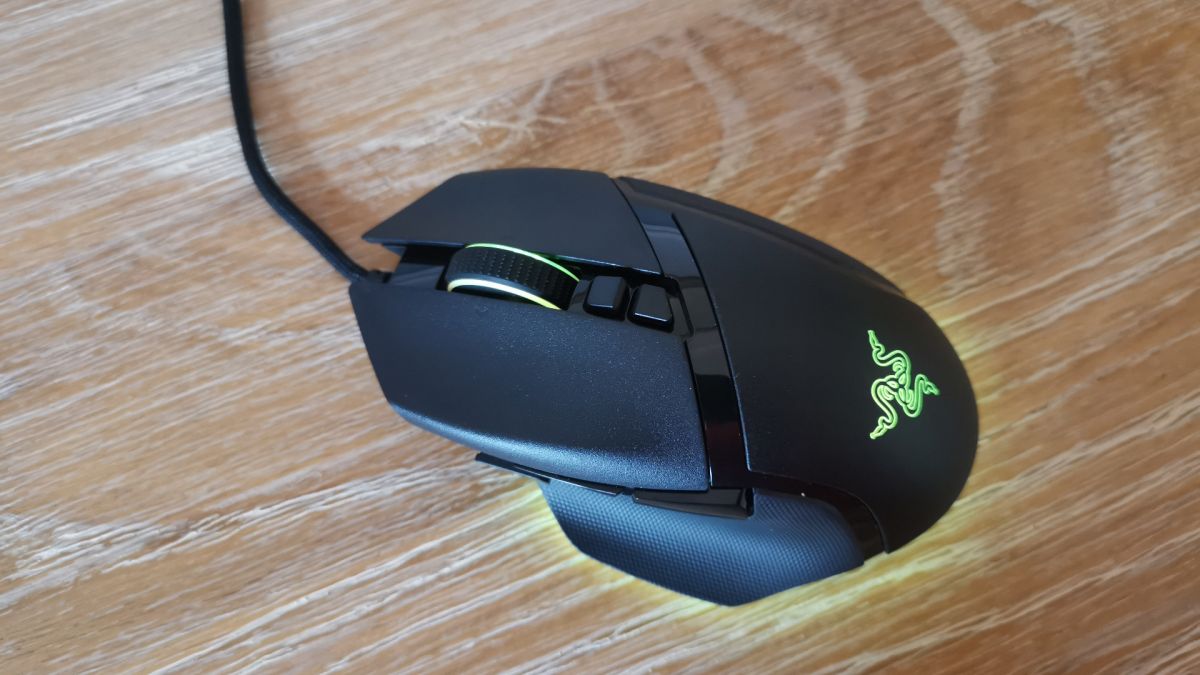 The Razer Basilisk V3 is a gaming mouse designed to give its users a wide range of customization options, taking some inspiration from one of the best gaming mice currently on the market, the Logitech G502 Hero. This isn’t any shade as both mice are easily distinguishable, but Razer has made some huge improvements on both the previous Basilisk V2 and Logitech’s offering.

The first difference you’ll notice between the second and third generations of this mouse is that even more Razer Chroma RGB has been included, adding a strip of underlighting that illuminates your mouse pad and syncs with your other Razer RGB peripherals via Synapse. You can even set this lighting to sync with audio thanks to the Chroma Visualizer, or react with Chroma-integrated games like Apex Legends or Fortnite.

Pretty lighting doesn’t enhance performance, but it’s better looking and more polished, and if you’re not a fan then you can simply switch it off.

In fact, switching off those flashy lights makes this a slightly more appropriate mouse to bring into the office if You don’t work from home, and there are great productivity benefits to doing so. A major feature of the Razer Basilisk V3 is its tilting HyperSpeed scroll wheel, allowing you to switch between the standard ‘tactile’ scrolling motion, and a free-spinning mode for rapidly scrolling down webpages or spreadsheets.

You also have the option to manually switch between the two, or enable ‘Smart-Reel’ mode via Razer Synapse that will detect when you scroll excessively and automatically move between tactile and free-spin mode depending on your activity.

We were skeptical, but it works better than expected, allowing you to have normal scrolling functions for most tasks and then rapidly scrolling up or down when viewing a website like Twitter. It can be a little sensitive, so it’s worth playing around in the settings, but we soon got the hang of using the Smart-Reel function without whizzing through webpages at great speed accidentally.

You can let the wheel spin itself down, or if you need to stop it, just spin in the opposite direction and you’ll hear a click that indicates it’s reverted back to a manual scroll, almost akin to an automatic car.

The scroll wheel can also tilt from left to right, giving you two additional ‘buttons’ that you can use to move across a page. This was a real asset when dealing with large spreadsheets, and you can assign them to any keys you fancy during games which can help with titles that have scrolling menu selections for things like weapons or consumables.

There are 11 buttons in total, one being located on the underside of the mouse itself to switch between different profiles that can be saved onto the mouse. There are five slots for profiles available, so you can save an array of different keybinds for various games or genres.

You’re also getting two buttons below the scroll wheel (one is set to switch between scrolling modes by default, but can be reassigned), the standard left and right mouse button and three buttons located on the left-hand side of the mouse, including a multi-functional trigger.

This trigger is very satisfying to click, and serves as either a standard macro button, or can be used to trigger Razer Hypershift, allowing you to swap between two different sets of controls, effectively doubling the number of actions at your disposal.

The ergonomic design of the Razer Basilisk V3 is comfortable to use, with a molded thumb rest located on the left-hand side to support you during gameplay. There are a few small complaints about this, the most obvious being that there is no left-hand or ambidextrous orientation for this mouse, so lefties will need to look at Razer’s other products. The button locations under the thumb rest are also a bit of a stretch for small hands, but not enough to be unusable, or even uncomfortable.

The Logitech G502 Hero has a set of customizable weights, which the Razer Basilisk V3 lacks, but we didn’t find the default weight to be an issue. In fact, the shoelace-style corded USB cable and PTFE feet helped the mouse glide with ease over just about every surface we tried, so fans of competitive shooters likely won’t find any issues regarding the size or weight.

You’re also getting 26,000 DPI vs the 25,600 DPI in the Logitech G502 Hero, and an AI smart tracking sensor that automatically calibrates itself when you move the mouse to a new surface. Some really serious gamers will manually recalibrate their mouse every time it switches to a new location for optimal performance, something that most consumers are unlikely to do, but Smart Tracking removing the responsibility could result in a slight improvement to gameplay with zero effort.

The optical sensors promise 99.6% resolution accuracy, and you’re getting Razer’s 2nd generation of optical mouse switch too which not only feels satisfying to click, but also results in a 0.2ms response time.

Overall, this is a mouse that sets out to be a Jack-Of-All-Trades and succeeds in doing so with a flourish. It’s incredibly versatile and can be used across just about every genre of games thanks to Razer HyperShift and is comfortable enough to use for a full work day without any cramping. If you’re looking for something that’s guaranteed to be an upgrade from your current mouse of choice, we’re willing to bet the Basilisk V3 will fit the bill.

You love RGB
If you like pretty lighting, the Basilisk V3 has plenty of it, and with Razer Chroma you can enjoy a host of fun reactive effects that sync to any other Razer peripherals you might have.

You take your mouse on the go
If you travel often, the Smart Tracking functionality will help automatically optimize your mouse to every surface you use it on, so you can game remotely knowing you’re not at any disadvantage.

You need one mouse for work and play
It’s hard to overestimate how useful the scroll functionality in the Razer Basilisk V3 is for admin tasks like spreadsheets, so if if you use your PC work both work and gaming, this mouse will serve you well.

You have small hands
You can use different grip styles and the size isn’t too large, but button placement on the left can make speedy reactions a stretch for small hands.

You hate wired mice
If you found that cables and wires bother you then you’ll have to look elsewhere as the Razer Basilisk V3 has a fixed corded USB.

You want customizable weight options
Razer specifically elected to not include a set of weights as most users don’t find they need to make adjustments, but if you like having that customization available then check out the Logitech G502 Hero.