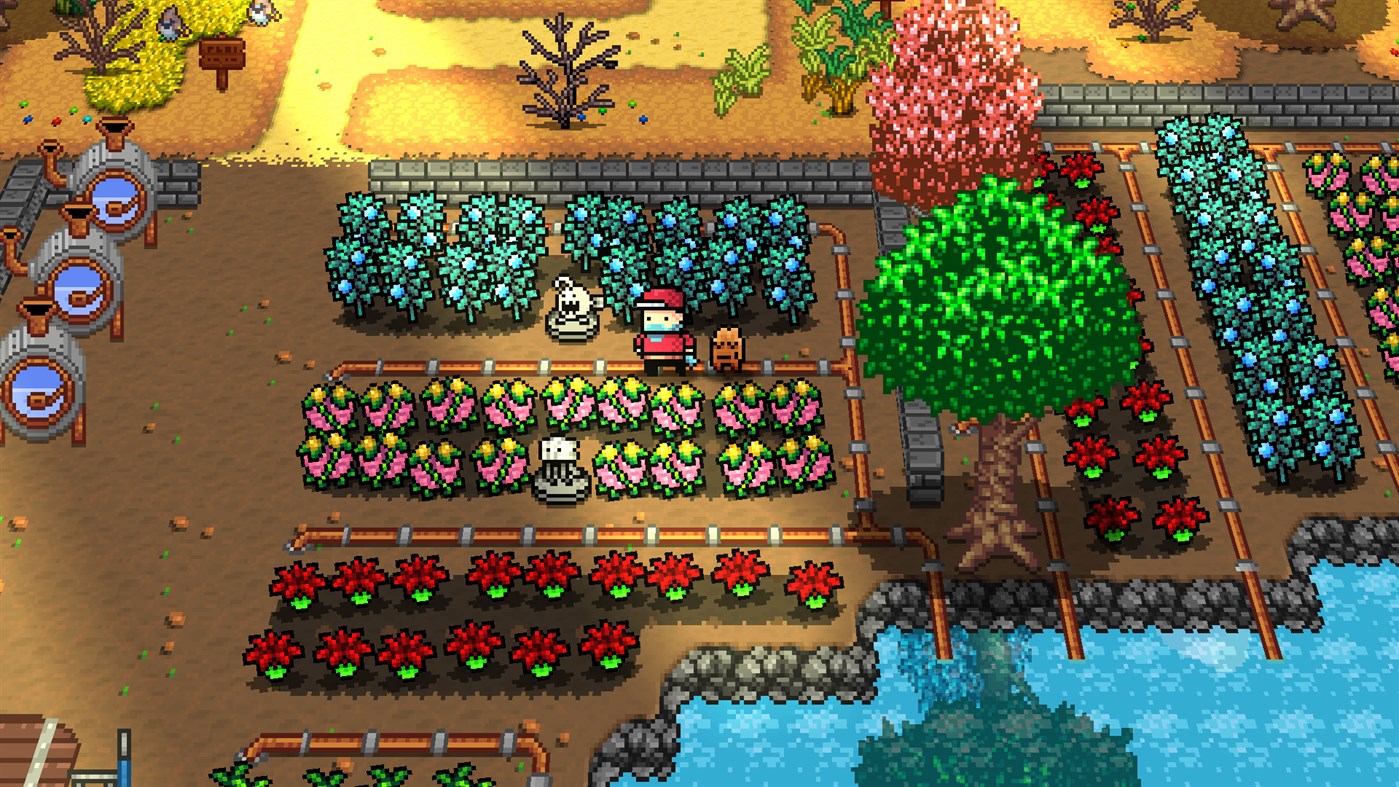 Coming from developers Maple Powered Games comes a weird little hybrid game. If you imagine Stardew Valley or Harvest Moon crossed with Pokemon, you’ll be about there, I think. That game is Monster Harvest and what this translates into is a game where you can grow crops, harvest things like wood and stone, and then have battles with your Planimals, which are in no way a direct rip off of Pokemon. With my appetite suitably whetted, I pulled on my gardening gloves and sallied forth.

The story of Monster Harvest is suitably bonkers. You are, for reasons, taking over a farm in Planimal Point, and as a coincidence, your uncle, who also lives in the newly named Planimal Point, is the inventor of the Planimals. Planimals, so we are clear, are this game’s Pokemon: mutated plants that have become ambulatory and will follow you around, even engaging in battles on your behalf. What this translates into is a game of two halves, split over the day/night cycle.

During the day, you can perform work on your farm. Planting and watering crops, clearing trees and rocks from the fields, crafting furniture, renovating buildings; all this and more covers the day-to-day grind of a farmer. You have only a finite amount of stamina to perform these actions though, which is designated by a green bar in the top left of the screen. When your stamina is depleted, which doesn’t seem to take very long at all, you are advised to go to bed. Crawling between the sheets, the choice has to be made as to whether to sleep till morning (refilling all the stamina) or whether to sleep till evening and only notching up a portion of your stamina, but then also being able to go on an adventure with your chosen Planimal.

Yes, come evening, the dungeons are open for business, and this means you can go and explore. As you wander around the ruins, which seem to come in a different layout every night, you will happen across new things to mine or harvest, new types of slime to kill (more on the slimes later) and even monsters to fight.

It’s this fighting which is key as if you encounter a monster roaming the dungeon, you can either run away, or launch into a Pokemon inspired battle to the death with said beastie. As you fight and level up the Planimals you have, they get stronger, but be warned: if your Planimal is defeated, you are found outside the dungeon, unconscious, and your Planimal, once dead, is dead for keeps!  There is no fainting here – they are straight up gone, and in return you get some Heart Slime, which can be used to grow stronger Planimals next time around. The circle of life and all that.

Now, the aforementioned slime. As you wander about, you’ll find slimes bimbling about, and a swift smack with a sword will get you some slime to keep. You can also buy it from the shop in the nearby town should you prefer your slime to be violence free. Slime comes in three colours or flavours, and can also be crafted from jewels, letting you put the slime of your choice on your crops. With a bit of luck and a following wind, the crops you anoint with slime will then mutate into Planimals. Obviously, different types of slime provide different results, as do the variety of crops you put it on and the season you apply it. There is lots to consider. Hell, some slime will produce little Planimals to follow you around, some will ensure bigger ones drop out requiring a stable to keep them in, and some even are big enough to ride. With a little light experimentation – there are apparently 72 different varieties of Planimal to find – there’s absolutely nothing to wait for.

The last thing to discuss is the look of Monster Harvest, mostly as the farming side of things is suitably retro and pleasant to look at. Wandering about, tending the fields and clearing obstacles is all very lovely indeed, and soon you’ll be putting up scarecrows and selling everything you can get your hands on, all in hope of being able to afford nicer things. The dungeon screen is equally functional, but it’s a different story when it comes to Planimal battles.

You see, even my son commented as to “why does it look so bad?” when he looked up from playing Terraria. Yes, if the farming graphics are retro, the battle graphics make original Gameboy Pokemon visuals seem cutting edge – and that is massively disappointing. It’s pretty similar in terms of the audio too; it is all much as you would expect, with chopping wood and smashing stone sound effects all present and correct. Other than that though, there’s not much else if I’m honest.

What this means is that whilst the farming part of Monster Harvest, the interacting with townsfolk and so on, is perfectly nice, relaxing to play almost, the whole Planimal thing is a bit of a faff; trying to get one to stay alive long enough to level up is a real challenge. The grind is real as well – believe me, you’ll need to chop a lot of wood and grow a lot of crops to make progress here.

All in all, there is fun to be had with Monster Harvest, and setting your farm up just right is a fun diversion, as is experimenting with Planimals. Battling them is another kettle of fish, mind.