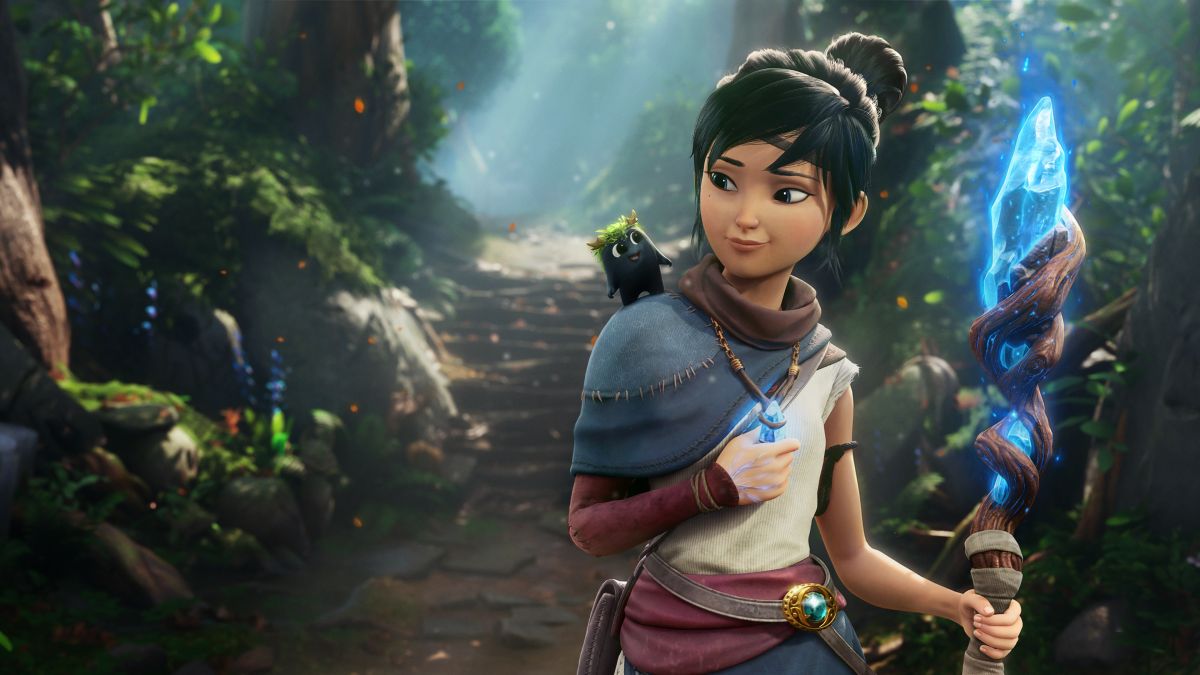 I wasn’t sure what to expect from Kena: Bridge of Spirits. Developer Ember Lab’s adorable adventure caused quite a stir when it was revealed at the PlayStation Future of Gaming showcase in 2020 Following a delay, it felt like Kena retreated into the shadows a bit – leaving some anxiety about whether it would still meet its new release date of September 21, and whether it would fall at the final hurdle many highly-anticipated releases have in the last couple of years.

Developing a game in the current climate is a heavy cross to bear, particularly for a smaller studio like Ember. My heart hoped I would be pleasantly surprised while my head said to temper expectations.

This cautious approach was probably for the best. Kena’s charming world and art style is its real hook, offering a family-friendly action-adventure that wouldn’t look out of place as Pixar’s next film. However, it’s, unfortunately, let down by its lack of originality and poor technical performance, with the latter often being too glaring an issue to ignore based on my experience with PS5 code.

Kena: Bridge of Spirits follows young spirit guide Kena who, while on a quest to reach a sacred place of power, comes across an abandoned village that is afflicted with corruption as a result of lost souls who haven’t quite moved on to the other side. Accompanied by companions known as Rot, who take the form of adorable little blob-like creatures, Kena sets out to uncover the secrets of the village and to clear the corruption by helping the spirits move on – an act that helps her untangle her own past.

The first thing that’s striking about Kena: Bridge of Spirits is its aesthetic. Its world is a vivid and lush one, packed full of ruins, shrines and flowing rivers, beckoning you to explore but also offering a serenity that’s only bolstered by its unforgettable Balinese score. Fortunately, exploration is absolutely encouraged and rewarded – and proves a necessity as you progress.

While Kena is set specific objectives to complete, there is plenty to collect and unlock on your journey, from Spirit Mail that needs to be delivered to the village, to Rots that, when found, join your posse and follow you like children on a school trip. Unfortunately, it’s hard to track which of these collectibles you’ve picked up as they don’t actually appear on the map, it just tells you how many you have out of the total for an area.

While Rots are cute, the game leans on this perhaps too heavily, letting you collect Gems (loads of Gems) to buy hats to pop on your spirit companions. While hats are an adorable feature, and will likely delight children, it feels like there’s perhaps more emphasis on collecting Gems for those than on the “Karma” needed to unlock new abilities. And you will, at times, find yourself clamoring for that Karma – and for new Rots. Both play a key part in the game’s combat, with Rots assisting in battles with special attacks (when they’ve gained enough courage in brawls to draw them out) and Karma allowing you to unlock new abilities via the game’s somewhat limited skill tree.

While the combat and its various elements take a bit of getting used to, it does feel pretty good. On PS5, the DualSense controller’s haptic feedback helps to immerse you in the action while its adaptive triggers let you feel the tension in your bow as you line up your shot. It’s a nice touch, but I have seen it implemented better elsewhere.

But don’t let the family-friendly nature of Kena trick you into thinking this is an easy game. I was taken slightly aback, playing on Spirit Guide mode (the equivalent of medium), that I struggled with some of Kena’s boss battles and puzzles. This level of challenge is a pleasant surprise to a degree, as it does provide a bit of bite, but I found myself questioning how a child playing on the same difficulty setting was meant to grapple with the elements I found tricky.

Often, boss battles rely on correctly timed dodges, using the right strategy and knowing when to use resources such as health – which is often limited and can only be unlocked by using a Rot ability. If this was a game primarily aimed at adults, this wouldn’t be as much of an issue as it is, but even the easiest mode can see boss fights being fairly relentless.

What makes Kena’s combat that much more frustrating is its technical performance issues. The game has two modes, Performance Mode, which sees it running at upscaled 4K at 60fps, and Fidelity Mode, which sees it running at native 4K at 30fps. To be honest, I can’t see a massive difference visually in the two modes but I have found Fidelity Mode almost unplayable due to how sluggish it is – so I’ve stuck with Performance Mode.

Even still in Performance Mode, Kena suffers from frame rate drops quite often – along with a multitude of other bugs such as cutscenes not triggering, getting stuck in the environments and textures sometimes not looking quite right. While the general bugs are annoying, the frame rate issues are detrimental to the game experience itself. Not only do they throw off dodges that need to be timed correctly, but it means that cinematic cutscenes – which are actually incredibly stunning and beautifully done – stammer like a knockoff PS1 game.

The cinematics have such potential, it’s frustrating to see it wasted. This is especially true as they’re the pillar stones of the story and often I found their stammering issues an obstacle to emotionally connecting with the game and its characters – I feel that, without these issues, maybe I could have made that connection. According to Ember Lab, these cinematics are pre-rendered videos running at 24fps – so we would expect them to run better. It’s a shame as they do look good enough to go toe-to-toe with Hollywood animated films but I found them almost unwatchable as they were so janky. What’s more, there’s no seamless transition back into gameplay, with a very clear difference from when you’re watching the cinematic to when you’re back in the less-visually-impressive gameplay world.

A launch day patch was set to fix issues, but I still find the cutscenes difficult to watch since it was implemented. It’s an issue that currently robs Kena: Bridge of Spirits of its best moments, and an element that could have garnered it the redemption it needed.

Kena: Bridge of Spirits is almost reminiscent of an Xbox 360-era adventure: it’s fun, colorful and charming. But it also risks becoming forgettable. Sure, Kena’s art style and world are its hooks, but it doesn’t feel like the game does much that’s unique – that pushes the genre forward and cements its place as a must-play action-adventure among a plethora of others.

However, I understand that Kena isn’t solely built for adults and, for younger players – and those not particularly bothered by technicalities – Kena is likely to delight. It’s a game of heart and empathy, but isn’t afraid to shy away from its dark moments – after all, it is a game that’s ultimately about death.

I loved playing Kena in the moment, once I looked past its jarring technical issues, and played for hours on end. But if you ask me in a year to recall the best bits, it’s likely I will have forgotten a lot about it. I enjoyed it as it fits a formula I’m already pretty familiar with, which many games have tapped into before. But I couldn’t help waiting for a “wow” moment that never came.