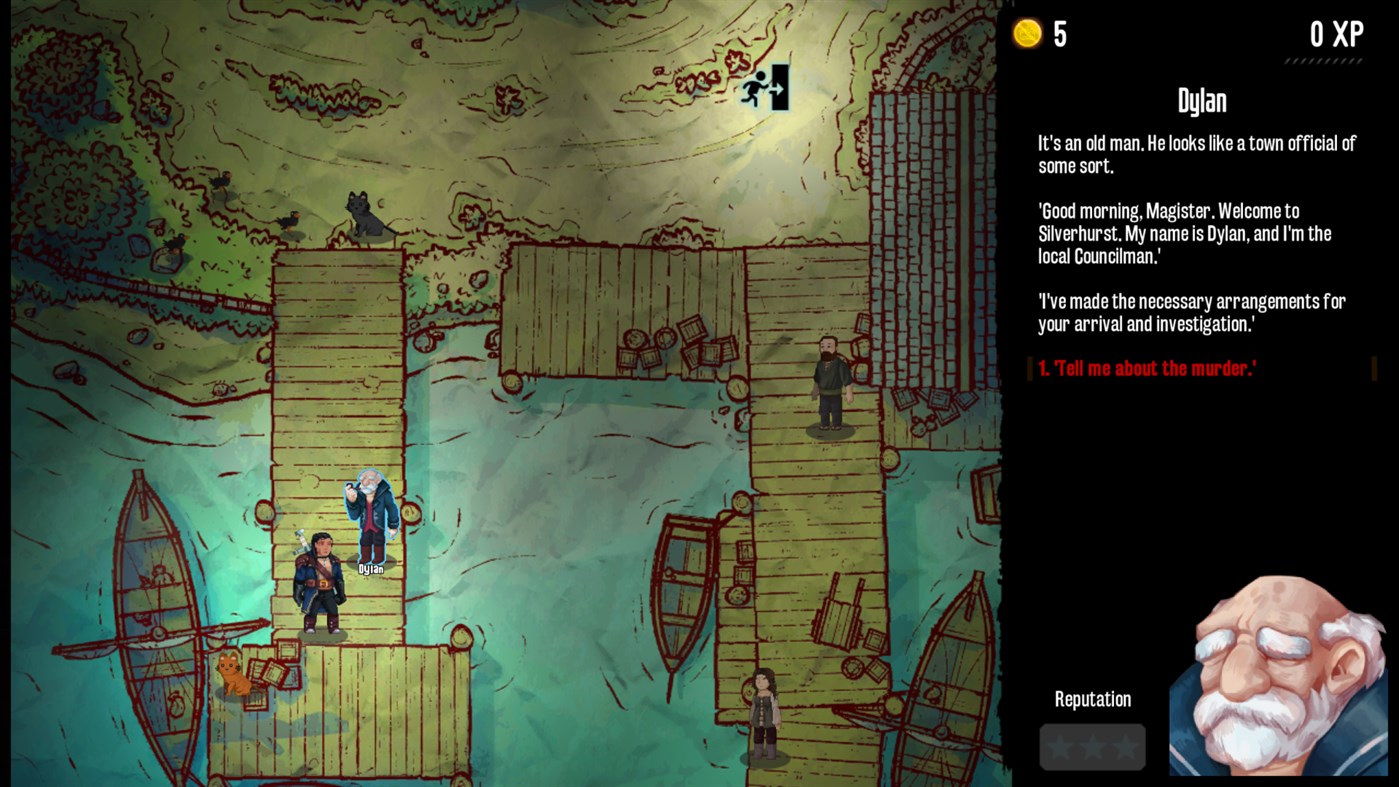 The Magister is probably the most ambitious game of Cluedo that you’ll ever play.

Like Cluedo, a murderer is secretly drawn from a deck of Miss Plums and Colonel Mustards, but in The Magister’s case it’s Hunters, Doctors and Blacksmiths. The location is the same every time, as a Magister is murdered in the room of an inn, but the murder weapon, the motive, and various steps along the way are chosen randomly, as if from a deck of cards. With the setup done, you are eliminating suspects by finding clues, cross-referencing them with alibis, until you have one nervous suspect left.

What makes The Magister so much more ambitious than Cluedo is the journey. It’s not the case of rolling some dice, drawing cards and asking questions of your opponents. That’s way too prosaic. Instead, The Magister folds in at least three different genres of game to form the investigation stages. There’s a turn-based strategy game here, a deckbuilder and a kind of resource-management sim, where you’re choosing how best to spend your limited number of actions per day, before the Head Magister throws you off the case for being an imbecile.

It’s initially mind-boggling, and stays that way for a few games afterwards. The Magister is not an immediate game, and you’ll understand the many levers you can pull, and the many ways you can improve your chances, after you have accused (or wrongly accused) a few people. But it’s reasonable to expect that a few players won’t get that far. While The Magister does have tutorials, they are better at explaining how things work than they are at explaining how to do things well.

Working through a case step-by-step should give you an idea of whether The Magister is for you. You are the titular Magister, and you arrive in the town of Silverhurst to investigate the murder of a fellow Magister. You grab a key from the innkeeper and investigate a few randomly chosen clues in the crime scene: perhaps the Magister was stabbed, shot, or there is poison in the room. Some mud or leaves might have been left in the room too, giving you some handholds in the case. These all then get represented as ‘cards’ in your Clues deck, which you can refer to throughout.

What tends to happen next is the chatty bit. It’s time to introduce yourself to the locals, uncovering their alibis. Some will give it up willingly, while others will hold out for you to gain their respect. This is gamified as three stars on the character, and you can gain more stars by employing their services (a courtesan can upgrade or remove cards from your deck for five gold, for example, which will also net you a star), or by completing a side-quest for them. Once you have three stars, the sky’s your oyster, and you can ask the suspect about their whereabouts, where they got the cuts on their arm (everyone seems to have scars) and gossip about other villagers.

Like a pocket Phoenix Wright, you can interject and call ‘bull’ on some of their alibis. When this works, it’s great. You might have a clue card that says a location was closed on the night of the murder, while a suspect will have used it for their alibi. We audibly shouted “aha!” and “oh no you didn’t!” in these sequences, jamming the A button to object. We say ‘when it works’ because these moments are a little rare, and when they do happen, they feel similar across cases. You start to spot the common lies.

Once you’ve done the rounds with the various suspects, you will want to complete the side-quests you’ve accumulated. This puts you in touch with the resource-management side of the game. You can’t just do everything – each location eats up a portion of the day, and there are unplanned events that will do the same. So, you’re building an itinerary of things to do from your side-quests.

These side-quests are pretty dang varied actually, so credit to Nerdook and Digerati for keeping things fresh and surprising. The most common outcome from a side-quest is combat. Some bandits will block your path, or shadow beasts will emerge from the night. Combat could have been a game on its own, as it attempts to fudge together an X-Com-style turn-based strategy with a deckbuilder.

The crux is that you have a turn sequence, shown in the top-right of the screen, which determines who’s turn is next. But doing any action, from moving on the grid to using one of your cards, moves you further back on that turn sequence. So, you can do a quick action with the reassurance that your next turn will crop up soon, or you can unload with all barrels and pretty much never have a turn again.

On the whole, combat’s great. The turn sequencing works a treat, and the deck of combat cards changes per playthrough, meaning you’ve got different attacks and defences that you’re leaning into with each case. Creatures are varied, even though the arena layouts aren’t, and you have a rotating cast of AI-controlled allies who will often do more damage than you. The blend of turn-based strategy and deckbuilding is a winner.

But combat falls down where a lot of the rest of The Magister falls down. In porting to console, the controls are a tug-of-war. You’re trying to pull focus to the right enemy or the right card, but getting there’s a trial. It’s befuddling why the D-pad is not used, as it would have handed more control to the player in these situations. Being able to press a single button to move from the combat arena back to the hand would have helped, too. Playing with a controller is a bag of eels and it could have been so much better.

The other common outcome from a side-quest is something called Tactical Diplomacy. Similar to Griftlands, launched earlier in 2021, this is a non-combat deckbuilder that has completely different rules to its own mirroring combat deckbuilder. Your aim is to reduce an opponent’s Rage total. That can only be done with very specific cards, and you only start with one of the Rage-reducing cards in your hand. So, you’re buying cards from a constantly replenishing shop at the top of the screen. These cards cost Empathy, so you’re stacking up as much of this currency to buy the big guns.

It’s unusual. Most deckbuilders play out over multiple games, but Tactical Diplomacy grows mid-battle. These were the norm before Slay the Spire, with card games like Dominion requiring you to build decks on the fly. And, in all honesty, we found it worked well. It’s more open to randomness and not getting the right cards when you need them, and the lack of persistence across matches can make the matches repetitive, but they are – on the whole – swift and entertaining. It feels good when the engine turns, and you’re drawing dozens of cards or taking multiple turns. At the end, you will have got the Rage to zero and you’ll convince your enemy not to fight you, or hand over a reward – perhaps even a clue for your investigations.

Clues are also common from puzzles that pop up at locations. These are mostly logic problems that require you to solve a pint-sized murder, or to deduce where a missing person has gone, based on the mutterings of ghosts. Once again, these work well, acting as cleansing moments from the bigger and longer deckbuilding sections. It’s nice to shut off the rest of the game and enjoy them. We rarely found them challenging, but they always worked.

Once you have enough clues, and you’re confident in your accusation, you can travel to the Signal Tower and call the Head Magister. Then it’s that tense moment that any Cluedo player will know full well: the cards are pulled from the black envelope, and your judgement is, itself, judged.

It’s a fascinating game to play, is The Magister. Its constituent parts are all pretty great, give or take some control issues, but I feel less and less compelled to play with each case. With so many interesting ways to play and tweak, it should have grabbed me by the collar and kept me playing.

The problem is that The Magister is not, unfortunately, the sum of its parts. Each sub-game is fantastic independently, but there are just too many of them: the interrogations, the non-combat card game, the combat card game, the puzzles. We haven’t even mentioned the levelling system (fantastic, transformative) and some raid-like areas.

Deckbuilders thrive on growing and building a deck, with the player fine-tuning it to perfection. But your decks in The Magister rarely change mid-case, and they never become over-powered. That’s because The Magister doesn’t hand you card rewards anywhere near enough. And that’s because there are too many games. The Magister spreads its rewards too thin, and the end result is that playing each sub-game becomes too repetitive, with a hole in the middle where strategy should be.

With more of a focus on one or two of The Magister’s minigames, it could have been a delight. A deduction game with a partnering deckbuilder sounds fantastic, but there’s too much bloat, too much ambition. As The Magister keeps offering more and more ways to play, it takes away the chance to master one of them. Rewards get spread out, the cases become more repetitive, and multiple playthroughs feel the same. It’s such a shame that the house of cards topples, as each of its rooms is impressive.

The Magister may not be as simple and focused as a game of Cluedo, but it still shares a lot of its joys. If you love the feeling of narrowing in on a suspect, or pulling back a mask in a Scooby Doo fashion, then The Magister might work for you. Just be prepared for a long, sometimes repetitive and always clumsy journey to get there.

You can buy The Magister for £12.49 from the Xbox Store for Xbox One and Xbox Series X|S