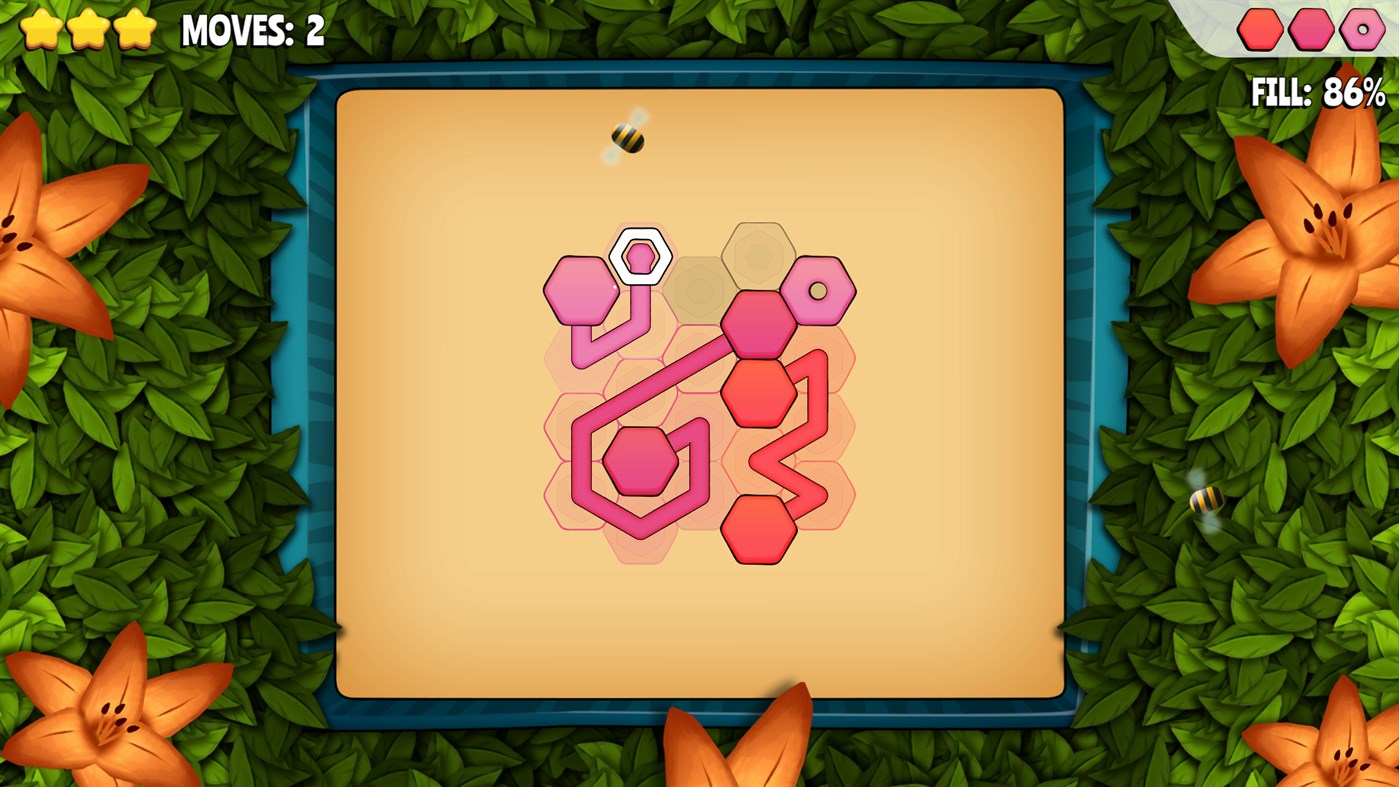 What is a Flowline, you might ask? If you’ve played a LEGO game (the hacking bits, mostly) or a hidden object game, you have probably come across one. You’re given a grid – sometimes squares, other times hexes – and that grid contains pairs of coloured nodes. Two red, two blue, two yellow: that sort of thing. You’ve got to create a path from the red node to the other red node, the blue node to the other blue, and so on, but paths may NEVER cross. If you manage to fill the entire grid while doing it, then Bob’s Your Puzzling Uncle – the level is done.

Flowlines VS. is a game entirely based on this kind of puzzle. It’s absolutely rammed with them – 486 individual puzzles in solo mode, all told – and all for the peanuts price of £4.19. We can’t imagine there’s anybody in the world who wants 486 of these kinds of puzzle, but – credit to Baltoro Games – they’ve served them up anyway. This is the definitive flowline puzzle release. We will probably never need another one.

We wouldn’t exactly say that a flowline is our favourite kind of puzzle, but there’s a relaxed, zen-like feel to them that whiles away the hours. There’s some low-level detective work as you figure out which nodes are going to be the problem nodes. Maybe they’re separated by the entire arena, or connecting them would cross multiple paths. So, you work backwards from there, creating convoluted paths that dodge the problem, and leave room for the other, simpler nodes to connect.

But there’s a double-edge to the zen sword. There’s only a few different ways that a flowline puzzle can trip you up, and once you know about them, you will largely be immune. Bigger grids and more nodes make it slightly more difficult, but they’re ultimately the same thing, writ large. It means that Flowlines VS. lacks variation. When there are 486 puzzles on offer, the fatigue is absolutely real.

This is made many, many times worse by Flowlines VS. being linear. If you’re finding the early puzzles numbingly easy, you can’t skip straight to puzzle 300, say, and kick off from there. It means you are wading through similar, benignly easy puzzles in the desperate hope that the difficulty picks up a little bit. Take it from us that they don’t get difficult until the midway mark, which is absolutely flipping hours into Flowlines VS. This has been solved in countless other puzzle games, like the POWGI releases, for example, so it’s frustrating to see it here.

Still, there’s a positive to the long, easy difficulty curve, and that’s the family-friendly nature of Flowlines VS. There’s a reason why they feature in LEGO games, and that’s because they’re relatively intuitive and small enough in length that failure doesn’t matter much. If you want a puzzle game that the whole family can work through (and putting your kids through the opening 200 levels might even get you over the hump), then Flowlines VS. is surprisingly accessible.

It does have a mean streak, though, so keep that in mind. If you are chasing a full three stars for a level (heaven help you if you return to play one of the 486 levels), Flowlines VS. is often unfair. You get stars for getting the puzzle right on the first go. But Flowlines Vs.’s controls are not precise. The game will assume you meant to move up and right, when you actually meant down and right. Flowlines VS. also doesn’t throw you many bones. It punishes you by removing a star if you accidentally plough into a wall, or a wrong-coloured node. There’s no reason why it should punish you, though: no human being would willingly walk into a wall, so why would the game assume you wanted to? It could easily have just disallowed the move and continued your path.

Some things do sprinkle onto Flowlines VS. to make it a bit more interesting, in the form of new mechanics. Crossroad hexes allow you to cross a hex multiple times. Rainbow hexes act as whatever colour node you want. Walls hem you in. Sometimes you’re even given a move limit. But in reality, they don’t change much. Rainbow hexes may act like your choice of node, but most of the time they are the only possible destination for an otherwise orphaned node. If you’re chasing three stars, the move limit has zero impact, since you will have to complete the puzzle perfectly regardless. Walls just make levels simpler. The ideas act more like garnish than anything with substance.

A little more fulfilling is the multiplayer mode. It is called Flowlines ‘VS’ after all. You can choose to play up to four players locally, with matches won by whoever completes a requisite number of puzzles first. These are effectively head-to-heads with you all racing through the same puzzle.

This mode is welcome, and adds a bit of va-va-voom to a stale puzzle game. But it still feels like something of a missed opportunity. There’s only a single multiplayer mode, and the lone option is to set the number of matches. Perhaps most damningly, at high speeds, the control issues become more stark. When you’re beaten because you accidentally overrode your longest path, it can leave with you a boiling primal rage.

What you’re left with – and this is rare for gaming – is too much of a good thing. The puzzles in Flowlines VS. are simple and relaxing enough, if not taxing. But, by offering 486 of them and then forcing the player to plod through every… last… one on the hunt for something resembling a challenge, Flowlines VS. loses a large chunk of its audience. It livens up a little in local multiplayer, but this is otherwise an overstuffed puzzler that would have benefitted from a tad more variation.

You can buy Flowlines VS for £4.19 from the Xbox Store for Xbox One and Xbox Series X|S

Doom can now run on a jailbroken tractor
Owlboy devs unveil Vikings on Trampolines
New Tales from the Borderlands coming in October, according to Amazon
How To Fix PS Remote Play ‘Something Went Wrong’ Error
Activision teases Modern Warfare 2’s latest map in an unusual place