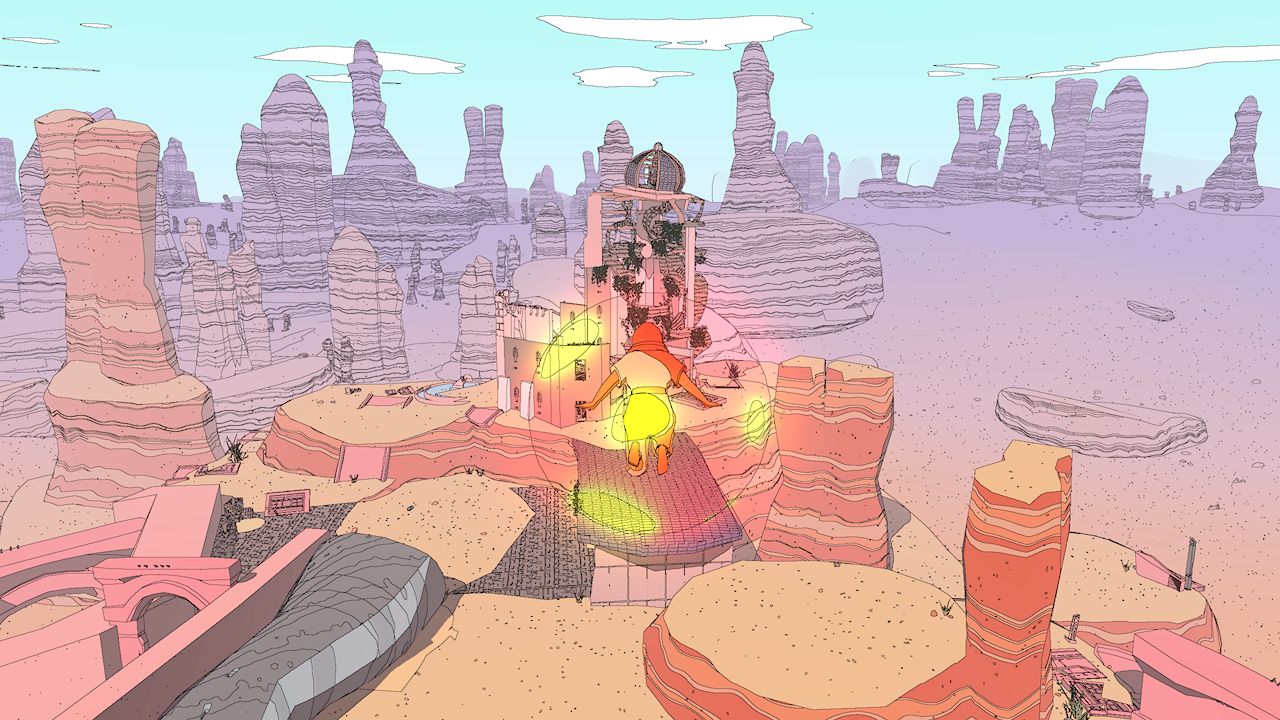 Sable stands in stark contrast to many conventions of open worlds. Devoid of conflict and combat, this is a world leaning entirely on the strength of its visuals, worldbuilding and exploration. However, developers Shedworks pull this feat off with impressive style, delivering an enriching experience that succeeds in spite of some technical issues.

You explore an almost entirely freeform open-world as the titular Sable, a young girl embarking on her Gliding. This pilgrimage sees her exploring the wastelands of Midden on a quest for a mask. More than just a headpiece, these embody a character’s role in Midden’s society: the Mechanists who assemble and maintain hoverbikes favour austere metal masks, for example, while Climbers are signified by cartoonish lizard helmets.

The game reassures you from the very beginning that there are no wrong paths to take, and Sable remains dedicated to this ethos for its twenty-odd hour runtime. Collecting three badges for any type of mask, earned by completing quests, grants it to you via a wonderfully unusual ritual. Once you’ve assembled your mask of choice, you’re free to finish the game whenever you please. However, this would be doing a grave disservice to an oft-magical experience.

Without any specific goals, Sable instead lets your curiosity act as the throughline, with quests merely acting as gentle nudges towards your next discovery. And what a world this is. This sparse landscape, inspired by the Jakku sequence in The Force Awakens, has a remarkably effective comic-book aesthetic, a Frank Miller vision brought to life. Sable isn’t a dense open world experience, but rather focuses on bespoke, hand-crafted structures placed throughout Midden. Journeys through the negative space echo the meditative qualities of Shadow of the Colossus as your hoverbike whips up clouds of dust, backed by a calming soundtrack from Japanese Breakfast that gives affairs a hypnotic quality.

Locations are as varied as they are beautiful: a cathedral-sized spherical astrolabe, the desiccated corpse of a gigantic sand wyrm, shipwrecked spacecrafts. I could go on, but the pleasure of Sable is standing on a hilltop, picking a new direction to travel in – presented diegetically by physically casting your waypoint into the distance – and having your breath taken away when you finally get there.

Climbing, your primary method of interaction, is a simplified take on Breath of the Wild, with Sable latching onto any grippable surface and continuing upwards until running out of stamina. Helping you out is the Gliding Stone, granted to Sable at the start of her journey, which allows you to slowly glide through the air in an energy orb. Without any fail states, Sable’s challenge mostly comes in the form of mild logistical puzzles, as you work out how exactly to scale these massive structures, alongside some single-room physics puzzles. These ascents are generally well-paced, forcing you to stop and observe your surroundings without breaking the meditative flow of proceedings, and typically pay off with spectacular vistas. All gear acquired is purely cosmetic, although your hoverbike can be upgraded using money, found in crates or acquired by selling scrap metal to a particularly grumpy vendor.

Shedworks consistently sprinkles unique elements into these puzzles to keep things fresh. The influence of The Outer Wilds shines through in the game’s few time-sensitive puzzles, as well as in the mysterious breadcrumb trail linking each wrecked spacecraft together into one grand narrative. Additionally, writer Meg Jayanth brings the game’s cast to life via vivid thumbnail descriptions, reminiscent of her work on titles like 80 Days and Sunless Sea. This is most notable with Sable herself, a likeable character who wears a witty mask of self-confidence to hide her inner anxieties when dealing with the adult world. Jaynath also elegantly tackles the prejudices that can come into play when dealing with science-fiction worlds: as Sable reminds herself when meeting a community of giant lightning-crystal miners, “these farmers are in no way beholden to my interpretation.”

This encapsulates Sable’s mission statement: providing the player with a fascinating and otherworldly place to explore without barriers, restrictions or judgement. For the most part, it works beautifully. However, stuttering is common in many areas on Xbox Series S, giving exploration a mild yet persistently choppy feel. Small technical errors are also fairly common, like camera clipping, music playing out of sync and texture pop-in, but are generally fixed with a quick reload. While the developers have committed to patching various performance issues in the coming weeks, they inarguably impact the sense of flow and immersion Shedworks is striving towards.

Other issues are minor for the most part. NPCs can have a certain stiffness thanks to their limited animations, making the few dialogue and cutscene-heavy quests feel underwhelming. It can also be confusing to tell what surfaces are climbable, leading to some frustrating moments of trial and error. Separately, acquiring certain masks can feel laughably trivial when compared to others. However, these nit-picks quickly become forgotten as you set out again, angling yourself towards a plume of smoke dispersing upwards into the hazy sky.

There’s a melancholia to Sable, wrapped up in the ruined cities and gigantic skeletons dotting its landscapes, but this is balanced with an infectious core of positivity running through the game. What it lacks in drama, it more than makes up for with sheer creativity and grandeur, leaving you with a sense of serenity much-needed and appreciated in these bizarre times. However, it all circles back to the joy of discovery: you might not know exactly what you’ll find as you peel back the layers of Midden, but it’s bound to be interesting.

Disclaimer: Tested on Xbox Series S, with a copy of the game provided by the publisher.