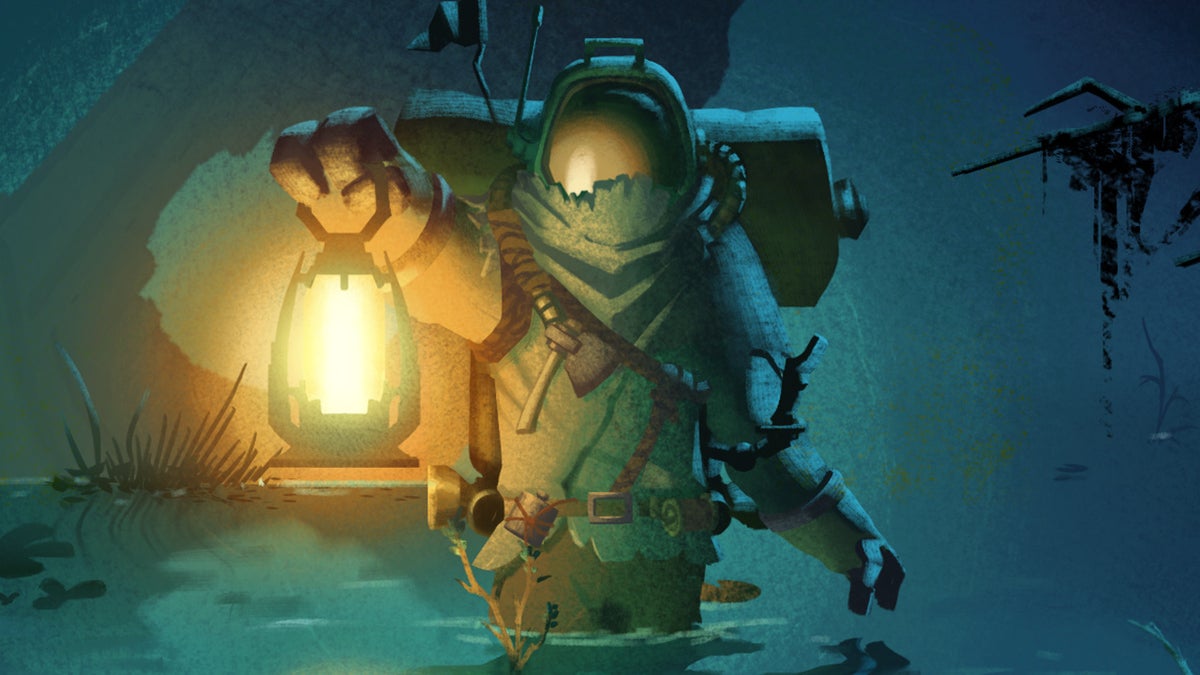 Exploring Outer Wilds’ stunning clockwork solar system in 2019 was truly something special, so getting the chance to return in a DLC expansion feels like Christmas came early – or, in this case, more like Halloween. Echoes of the Eye weaves one more thread worth pulling into the already complex tapestry of Outer Wilds, handily recapturing its charming, woodsy-sci-fi aesthetic and intricate time-loop puzzle solving, but this time with a creepier tone and a few sections that fully shift genres from adventure to horror game. That’s not exactly what I ended up wanting from more Outer Wilds, and its siloed nature does make it a little more linear to explore, but Echoes of the Eye is still a great reason to revisit this ever-exploding star.

Before I dive in, a quick word about spoilers: I’m not going to get into specific plot points or puzzles solutions here, but I will discuss some of the new areas and mechanics. Anyone who has played the base game knows that much of the magic of Outer Wilds can come from the surprise of stumbling upon a thrilling discovery or witnessing one of its timed events from just the right spot. Echoes of the Eye is no exception, and I am going to preserve that surprise as much as possible, but those looking to go in entirely fresh should be warned that some of it will be mentioned by necessity.

What We Said About Outer Wilds

“Outer Wilds’ tricky exploration and puzzle solving is definitely an acquired taste. Its very specific brand of active storytelling differs wildly from highly guided open-worlds that many of us think of when we talk about non-linear gameplay. Though it can be confounding at times when events don’t unfold in precisely the right way, the feeling of discovering something new about the story, or following a couple of facts to something totally unexpected on a faraway planet far outweighs those hiccups.” – Mike Epstein, May 30, 2019

Echoes of the Eye cleverly integrates its new mysteries by pretending they’ve been there all along, hiding in the shadows. A new exhibit in the museum on Timber Hearth will point you toward a nearby research station monitoring a photo-taking satellite, and following that simple but exciting lead will eventually land you in a brand-new area with just as much to do as any of the base game’s planets. This setup does mean that Echoes of the Eye won’t have you bouncing around the solar system trying to piece together distant clues, which does make its discoveries a little more straightforward to unravel, but there are still plenty of intertwining secrets to find in this area alone.

The bulk of this side adventure is basically a haunted river-rafting trip (which absolutely rules), with many of its puzzles and new mechanics built around using light. That includes the rafts you’ll be riding between locations, which have orbs you can shine your flashlight on to float in a specific direction, as well as locked doors that open when illuminated. It’s a neat little twist that sets how you navigate this area apart from the others, but it also maintains that same sense of wonder as things change in surprising ways at set times during each loop.

The focus on light ties perfectly into this DLC’s spookier vibe.

The focus on light is also a clever choice because it ties perfectly into Echoes of the Eye’s spookier vibe, often forcing you to wander through the dark and occasionally making light a luxury you desperately wish you could afford. Avoiding spoilers as much as possible, this new area is essentially split in two: one half is much closer to the physics-bending, awe-inspiring planet exploration of the original game, while the other occasionally warps Outer Wilds into a proper horror game. I’m talking a “stumbling around in the dark trying to figure out how to progress while monsters hunt you” kind of horror game – and it sure does play that metaphorical screeching violin well.

Outer Wilds has always had some creepier sections and the looming threat of death, but this tangible mechanical shift (while well implemented) isn’t one I was expecting, and ultimately wasn’t something I was too interested in compared to my previous planet hopping. I will freely admit that I am not generally into horror games overall, and those who are will almost certainly enjoy these sections more than I did, but that’s sort of the problem; these bits are so unlike the rest of Outer Wilds that they almost feel like an entirely different game – one that’s fun but far less unique, and pretty much just had me wishing I was playing more of its usual style instead.

The horror sections are unavoidable, but thankfully not a huge part of the roughly seven hours Echoes of the Eye’s surprisingly hefty expansion took me to complete. (There is also a “Reduced Frights” menu option that makes these sequences a little less intense, which is a small but appreciated inclusion for those who actively dislike horror but love Outer Wilds, although not one that changes enough to truly solve that particular problem.) And genre be damned, the story told throughout this DLC is still an enthralling one. The self-contained structure and more linear layout of its locations does mean the pieces of that story are easier to assemble than the history of the base game’s Nomai, but that doesn’t mean they’re not fun to uncover all the same.