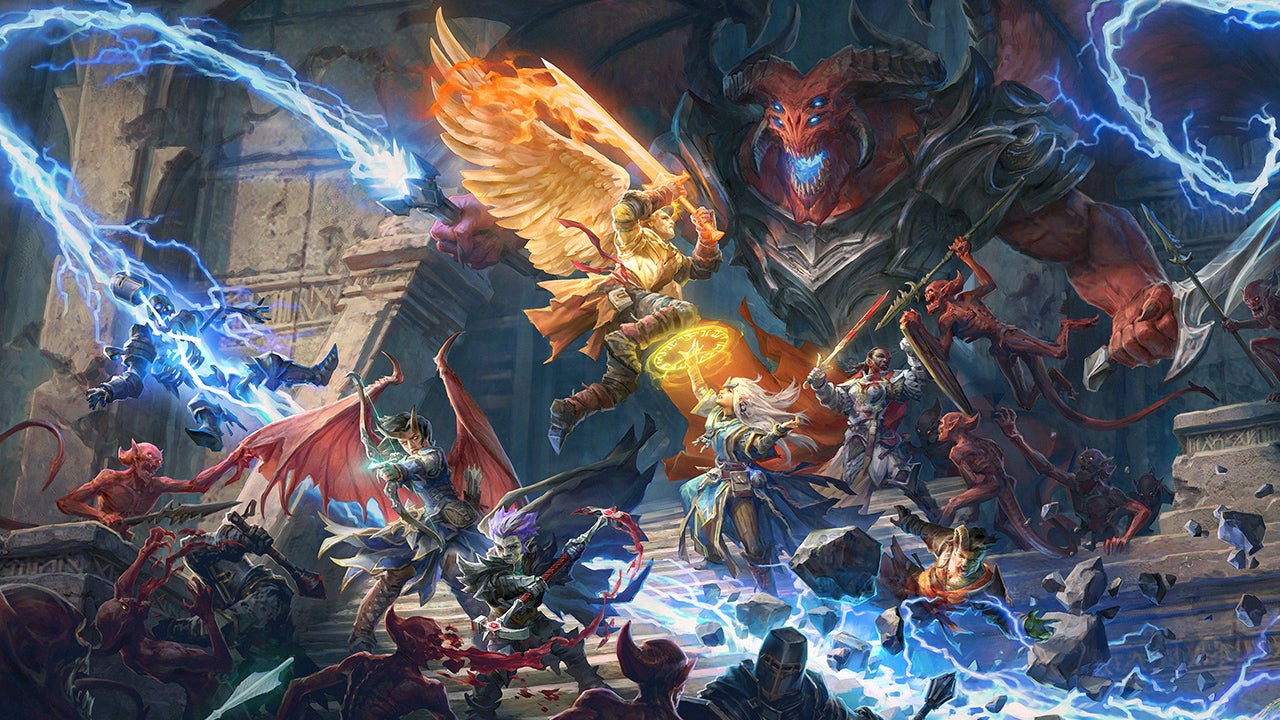 Pathfinder: Wrath of the Righteous is big. It is a massive, life-dominating endeavor likely to take weeks of playing before completion, dominating your thoughts and plans during that time. Sometimes that size means spending hours on frustrating time as an army manager, but the role-playing, exploring, and especially combat make it very much worth it. Wrath of the Righteous leaves a memorable mark on the throwback-style RPG genre, with strong companion personality and turn-based combat.

The pedigree of Wrath of the Righteous is big as well, adapting another of the Pathfinder tabletop game’s epic “Adventure Paths” and honing the concepts of 2018’s similarly large Pathfinder: Kingmaker. Kingmaker’s generic fantasy kingdom is replaced here by the specific story of a crusade against a demon army on the border of the world and the Abyss. Sometimes this is a little off-putting, in that it’s easy to miss fighting ogres and goblins in a fantasy game when you’re neck-deep in nabasu and dretch (whatever those are). But the decision to give Wrath of the Righteous a specific focus like this mostly pays off, especially when it allows for the party’s companions to have stronger personalities. I even found myself having strong enough feelings about my party members’ behaviors that I ended up killing or removing some of them from the group at multiple different points, which I’ve never done in an RPG before the endgame.

In the history of story-focused RPGs, sequels are almost always more complicated and usually more interesting than the original games they follow. The key distinction tends to be that the original games are generalized, proof-of-concept, and the sequels are more specific and specialized, leaning into particular elements of the systems or settings to more fully examine them. (Not to mention general improvements in graphics, balance, and interface.)

Knights of the Old Republic was a pure Star Wars heroic adventure, where KOTOR 2 was a darker, more complex deconstruction of what Star Wars mythology means. The first Pillars of Eternity felt like a setting and system in search of a story, while Pillars 2 focusing on the metaphysics of godhood combined with the complications of colonialism made it shine. Mass Effect 2‘s companions were infinitely more memorable than the first game (except Wrex, of course) and Fallout New Vegas has a cult following well beyond either the third or fourth installments of that series. Wrath of the Righteous fits firmly and mostly happily in this tradition.

Wrath of the Righteous also improves on Kingmaker and other RPGs from the Baldur’s Gate family in a few important technical ways. For instance, it’s the first isometric game like this I’ve seen to allow the camera to be spun around the game world, while still looking great from any angle. Even better, the finicky rules-lawyering that made Kingmaker such a pain when it first came out is long-gone, making Wrath welcoming to new players. I’ve noticed almost no arbitrary punishments for not knowing all of Pathfinder’s rules, which was my main problem by far with Kingmaker. It also adds dozens of new character classes and variants, with Cavaliers and Shamans joining the typical Fighters and Clerics.

The biggest and best change for the Pathfinder series and for the genre as a whole, however, is that Wrath of the Righteous has a turn-based mode available from the start. The Baldur’s Gate or Infinity Engine-style of isometric D&D-based RPG has always been built on a foundation of “real-time combat with pause,” where either all your little dudes run at the monsters at once before a few corpses explode and you hope none of them are yours, or you spend half an hour pressing pause on and off trying to manipulate a system into a messy facsimile of turn-based combat in order to have some feeling of control over it. That manner of combat is one of my least favorite in gaming, and it’s stood in the way of my enjoyment of a genre that’s otherwise made for me. Kingmaker and Pillars of Eternity 2 both experimented with turn-based modes, but these were patched in well after release. Wrath of the Righteous is the first major Infinity Engine-stlye game to have a full turn-based mode from the start (and also, because of that, the first of these turn-based modes that I’ve personally played).

And it’s amazing. The interface switches seamlessly between the two game modes at the press of the T-key, which you can do at any time. Even better, having a legitimately fun turn-based mode makes me care about the occasionally complex systems of the Pathfinder ruleset. Because of this mode, I can focus on actually learning how to break down enemies that have great saving throws or armor classes, for example, or care about the difference between the Searing Ray and Burning Arc spells. The only real downside is that combat encounters which might only take 10 to 30 seconds in real-time mode may take much longer in the slower-paced turn-based mode, which can make an already massive campaign feel even more drawn out – but that was a small price to pay for me to actually care about combat.

Having a legitimately fun turn-based mode makes me care about the occasionally complex systems of the Pathfinder ruleset.

The specificity of Wrath of the Righteous’ setting also helps in that systemic development. As you play the Commander of a grand crusade to defeat the demonic invasion forever, your character isn’t just a hero, but a Mythic Hero, who gets granted special powers over the course of the campaign. These can work to accent and dramatically improve existing skills; my barbarian Bloodrager, for example, gained the ability to use her Bloodrage skill as much as she wanted instead of having a cap on it. Meanwhile, I could give my Wizard extra first-level spells and a bonus to ice magic so she could throw dozens of high-damage snowballs at foes.

What We Said About Pathfinder: Kingmaker

Pathfinder: Kingmaker delivers a fantastic story and a deep character system to dive into. Without a Dungeon Master on the player’s side to smooth out the rough edges however, its balance is wildly inconsistent and its event design, flawed. So many promising ideas fall well short in execution. – D.M. Schmeyer, October 17, 2018

The major plot differences between Wrath and other fantasy RPGs also show up in the story side of the Mythic Paths. Based on your ethical choices as the quest starts and your alignment overall, you’ll have the option to pick one of several paths, from the somewhat generic good and evil of the Angel and Demon paths, to the freedom-loving Azata that my Chaotic Good character took, to darker paths like becoming a Lich and even resurrecting otherwise dead enemies as new party members. There’s a lot of promise in this system and when it works it’s great for keeping the plot flexible, but actually understanding how, why, and where you’ll have access to those various Mythic Paths can be difficult to parse. As a Chaotic character it feels like I should have had access to the Trickster path, but apparently I’d missed a single dialogue option 10 hours before setting that decision in stone, and so was locked out.

There’s a lot to recommend about the plot and writing.

Even with that, there’s still a lot to recommend about the plot and writing. The overall plot can be fairly conventional with the mostly-good mortals finding off the demonic hordes, but it’s given some extra spice when the legendary demonic witch, Areelu Vorlesh, shows up and starts raising complicated questions about free will and morality.

I was also particularly impressed with how, when you’re given notable choices while adventuring, your party members won’t merely chime in but will actually argue with one another in some detail. In one choice I happened to have the naively optimistic Ember and the polite-but-selfish prissy noble Camellia in my party; Ember responded to some clearly over-the-top nastiness by believing that the crusaders in question were just good people trying to do the right thing but making mistakes, and Camellia just tore into Ember’s childlike ignorance. More could be done, of course (more could always theoretically be done to have writing for everything in an RPG) but Wrath follows games like Pillars 2 in pushing boundaries.

Unfortunately, that attention to storytelling and systemic detail is lacking from a major part of Wrath of the Righteous: its crusade management. This is divided into a strategic component of building up the crusade infrastructure and making choices in events, and a wargame of moving armies of crusaders around to reclaim territory from the demon hordes. Both are underwhelming.

The strategic layer is very similar to that of Kingmaker, where advisors present you with choices and you also have to develop your capital and forts with buildings. It feels like busywork and also unbalanced – you rarely have to make an actual difficult decision beyond just waiting for more money or more time. The risk/reward element of Kingmaker having you send different advisors to handle situations in their own unique and possibly wrong way is entirely gone as well, with all of the potential failures channeled over into the army side of things. It’s also annoying that going to and from the strategic layer requires going through load screens, a minor problem with the game overall generally but an eye-rollingly annoying one in this mode.

Armies move and fight in a very simple turn-based facsimile of a King’s Bounty-style tactics game. You recruit units to give your armies different capabilities, such as sorcerors to cast some extra spells, but for the most part combat is a matter of having your generals use the same abilities over and over while your troops just conk enemies on the head for 10 minutes until the battle is won – then rinse and repeat. It’s not terrible, but it’s not especially good, either, and I would genuinely recommend that most people set it to automatic from the options menu. The sheer length of battles and amount of attention it takes can wreak havoc on the campaign pacing.

And yeah, that pacing simply has to be mentioned. Wrath of the Righteous is a long, involved game even by the standards of being in the long, involved genre of role-playing games and the specific extra-long, involved type of the retro isometric RPG. I have played probably over 100 hours – multiple hours every day since release – and am 3/4s of the way to the level cap but the campaign just keeps going. However, there is depth here to earn that time investment; even beyond playing through the campaign to win, there are different mythic paths to try out, the ability to roll your own parties, and just raising the difficulty for greater challenge. It would be easy to fall into Wrath of the Righteous for months on end, and I say that intending it to be both a recommendation and a warning.