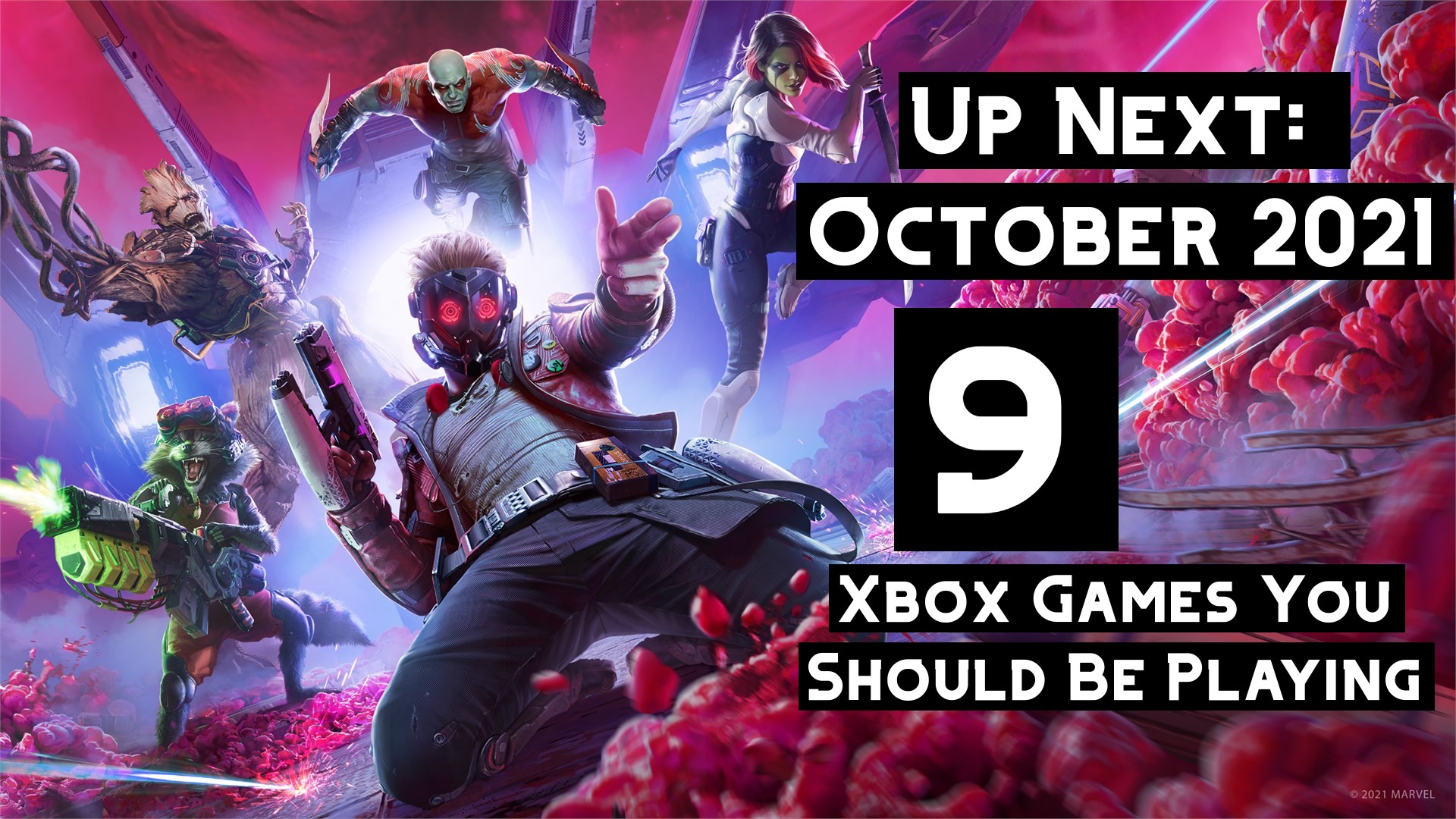 We’re hopping in the sleigh and heading for the ‘Holiday Period’ which means big games are coming for our wallets in October 2021. There’s the nailed on Christmas Number One in the form of FIFA 22, of course, but there’s more blockbusters here than on a 1990’s high street. Tell us when to stop: Far Cry 6, Back 4 Blood, Alan Wake Remastered, Marvel’s Guardians of the Galaxy, Riders Republic…

We’re hopeful that some of them will actually be good, too, as a few delayed games are finally landing. All that extra time should make them nigh-on perfect. Right? Eyes on you, Far Cry 6 and Riders Republic. Needless to say, we’ve got queues to play them back here at TheXboxHub regardless.

Oh, FIFA, never change. In that, FIFA, you never actually change. You might up Declan Rice’s Pace stat to 73 in FIFA 22, or dink Sadio Mane down a point or two, but we know the truth. Prove us wrong: we’re expecting as slight a makeover as Phil Foden’s blonde hair in the Euros.

Let’s catalogue the changes, which might be a brand of folly on a level with Norwich staying in the Prem for more than one season. Thanks to patented HyperMotion Technology™, we have 4000 new animations, all motion-tracked from real footballers. We have AI improvements meaning that players react as a team, rather than individuals. Alex Scott provides commentary, and Career Mode allows you to now Create Your Club (their capitals, not ours).

Drop-in co-op is possible in Pro Clubs, and there are plenty of additions to the street football spin-off, ‘VOLTA Football’, including signature abilities and new celebrations. But let’s be honest, EA Sports’ greatest focus was always going to be moneyspinner Ultimate Team, and that’s where the most significant changes come. The new FUT Icons are Wayne Rooney, Robin van Persie, Iker Cassilas, and Cafu, and there are new Legendary Cards that guarantee green chemistry with players from the same league. So go empty your bank account and get them.

My name is Alan Wake, and I’m a writer.

With those words, we were introduced to one of 2010’s finest, if whiniest, in Alan Wake. It’s amazing to think that it’s been eleven years since we got our torch and flare gun on and wandered into a pile of Taken. But if there’s a time to return to it, it’s now: the Remediverse (do we have a name for this thing yet?) has all but been confirmed with the ending of Control, and we can expect Alan Wake to reappear in future games. We’re hoping to see our man Barry Wheeler in them too.

All the modern remaster boxes are ticked with this one. It’s in full 4K and has all the DLC packaged with it, including The Signal and The Writer. The entire audio track has had a spruce, as have the cutscenes and voice acting. There’s no announcement that Alan Wake: American Nightmare is packaged with it, nor the short films that released to expand the universe, but we can hope that Remedy will surprise us with them when we get our hands on Alan Wake’s remaster package.

As Limp Bizkit would recommend, keep rolling rolling rolling, as there are absolutely hundreds of levels here. There’s solace in the fact that some have had their difficulty reduced, so you won’t necessarily have a face like a smacked baboon’s arse after every level.

In Far Cry terms, it’s been a while. Far Cry New Dawn, itself only a spin-off, launched in 2019, which means we’ve had a gap year, which is very un-Ubisoft.

But here we are with Far Cry 6, and it might mean that we have an open world itch to scratch. You play Dani Rojas, unisexually chosen so that you can play as a female or male resistance fighter. The wartorn dystopia this time round is Yara, and your authoritarian of choice is Gus Fring – sorry – Moff Gideon – sorry again – Anton, otherwise known as the brilliant and always terrifying Giancarlo Esposito.

Speculation is rife that this is a prequel to the best Far Cry, Far Cry 3, and we’ll see if that plays out. What you can be sure of is the fantastic Far Cry formula with a few worthwhile additions: full co-op for the entirety of the game (fantastico!), ‘amigos’ or allies that follow you around including an alligator in a basketball vest, and supremo backpacks, which seem to turn you into a one-man-band of death-dealing.

Talking of itches that need to be scratched, we have a giant Left 4 Dead-sized one. Games like World War Z have acted as a temporary backscratcher, but Valve and Turtle Rock’s seminal series is a hard thing to replace.

Back 4 Blood has no shame in its aims. It wants to be your new Left 4 Dead partner. It’s got the same naming convention, and it’s from the same studio in Turtle Rock Games. We can be safe in the knowledge that this would have been called Left 4 Dead 3 if there wasn’t such a thing as IP ownership and trademark infringement.

What’s new? Not a whole lot, actually, which is kind of the point. This is 4-player cooperative mayhem against a zombie horde, with a PvP mode that enables another four people to take on the Corrupted. What is new is a jump on the card/deckbuilder bandwagon, as you construct decks before each match, making sure you have a combined load-out to save the day. But watch out: the AI is doing the same.

The Dark Pictures Anthology reaches trilogy status with House of Ashes. But never fear, there are eight planned instalments. You have to admire Supermassive and Bandai Games’ ambition there. It’s making us realise that we should get started with the series before it becomes Sopranos-long.

The premise of House of Ashes feels a lot more pulpy and genre-driven than usual, even going so far to remind us of the terrible horror movie The Pyramid. Five US soldiers find themselves trapped in a Mesopotamian temple during the 2003 Iraq War. The dead take this infraction poorly and begin to rise, picking them off one-by-one.

As with all the Dark Pictures games, this is interactive fiction with an emphasis on making the right choices or the characters get it. Multiple endings are available, dependent largely on your survival rate, so there are plenty of reasons to give this multiple playthroughs.

Marvel’s Guardians of the Galaxy

A lot of eyes are on Marvel’s Guardians of the Galaxy. Following the reasonably public failings of Marvel’s Avengers, there are plenty of people keenly holding onto their moneybags, wondering what is going to happen. Is Marvel a valuable property in video games? Can you translate the MCU’s bombast and scope to console? Do Eidos-Montreal and Square Enix have the chutzpah to make a solid Marvel game?

First previews and reports have been mixed, focusing on the game’s complexity, more than anything else. It seems that there is an abundance of things to do.

You play Peter Quill, aka Star Lord, which already means that you have command of both a blaster and a jetpack. Then you have the Guardians themselves, all controlled by AI, but you have to issue commands to rally them to certain objectives. A Team Huddle can be called on, which is less of a timeout and more of a massive combo that wipes mobs off the screen, and you’ll have to manage moments of dialogue, as you can fall in and out of friendship with your compatriots.

We’re fascinated to see if this merry band of a-holes leap off the screen, or if they get mired in the many game systems.

Wait, didn’t Riders Republic come out yonks ago? You’d be forgiven for thinking so, as we’ve had a delay or two on this one. But it’s here, and all the players who have been moaning about the lack of a new Steep, SSX Tricky or 1080 Snowboarding will finally have something to sate the beast.

This is an open world sports game, meshing together some of the largest and iconic national parks via GPS data. You have Bryce Canyon, Yosemite Valley and more, all sprinkled with powder and primed for skis, snowboards, wingsuits and mountain bikes. It’s a veritable gymkhana of extreme sporting.

Complete events in the career mode, like the UCI Mountain Bike World Cup and the Redbull Rampage, both real-world events, and you’ll be able to outfit your character and eventually unlock the Riders Ridge Invitational. This one looks like it might suck up your free time when it launches in October.

We can’t let the AAA cash cows hog all the limelight, so our indie of the month comes in the form of Moonglow Bay. It’s got a simple premise: in RPGs there tends to be ‘the fishing minigame’, a little offshoot that you can play as little or as much as you want to. But what if you flipped that on its head? What if fishing was the RPG, and everything else was frillery?

Through the power of angling, you are bringing wealth back to the community, creating relationships and bringing your family back together. Who knew that a fishing rod, a tin of maggots and a crabbing bucket would have so much power.

As with so many indie games, it’s the style of Moonglow Bay that has us on the end of its hook. It’s a lavish voxel game that recalls the best moments of The Touryst, and we are incredibly happy about the prospect of holidaying in Moonglow Bay.

There’s not enough time in the month to play all of the games that October is throwing at us, so take solace in the fact that October is 31 days long. If that’s not a reason to play more Xbox and buy more of these games, nothing is.

Return for next month when it gets ridiculous. There’s Call of Duty: Vanguard, Battlefield 2042, Forza Horizon 5 and – most importantly – Farming Simulator 22, all releasing in November, so clear out your combine harvester, as the big games are going to fill your hopper.

Let us know what you are picking up. The comments are below.