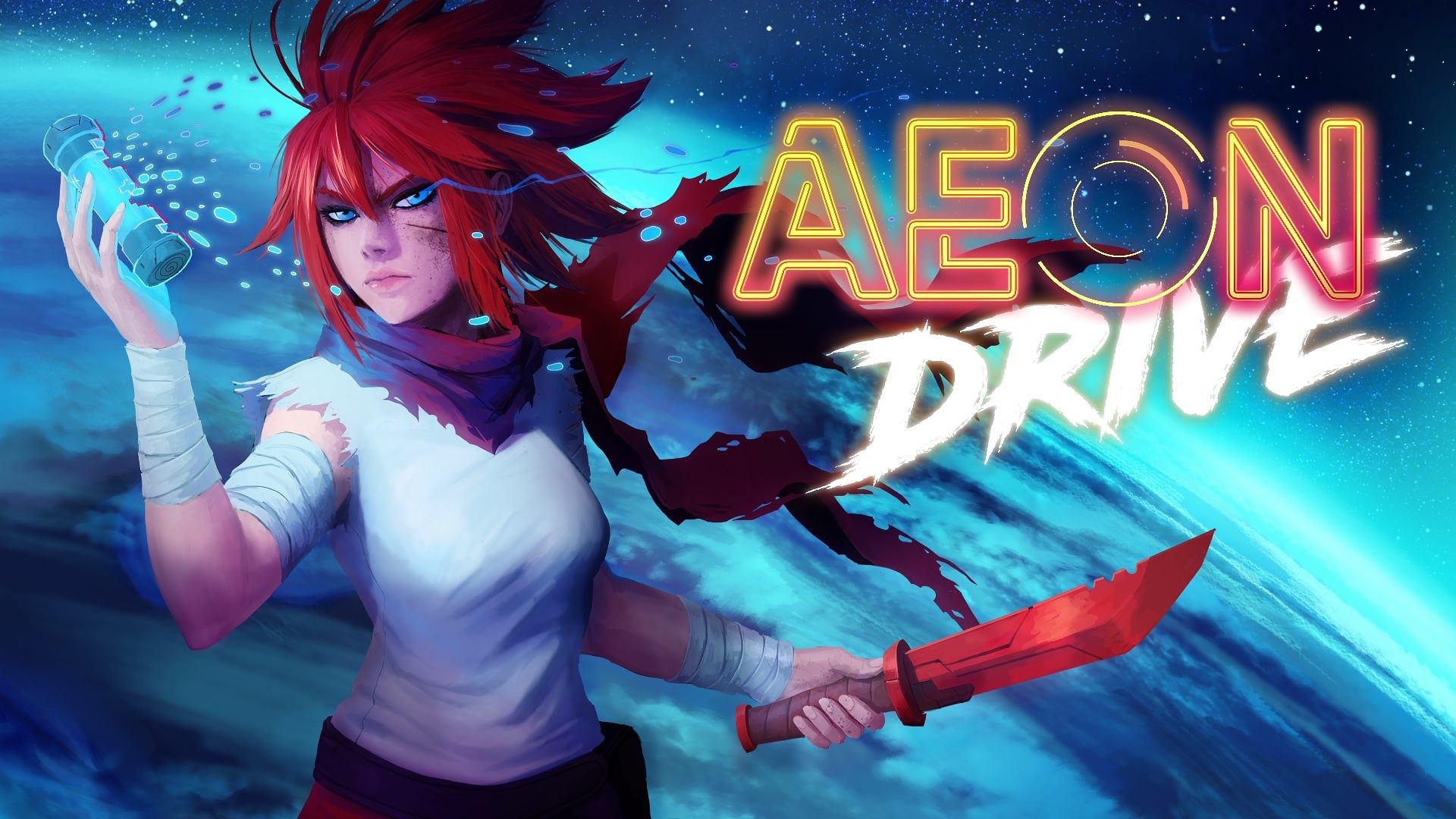 You only have 30 seconds to save the world. Sounds complicated? You’re absolutely right! But aside from that, it’s a lot of fun!

We at Critical Reflex are happy to introduce you to Aeon Drive, a platformer in which you have to complete each level in just half a minute, coming to you on PS4 and PS5. If our protagonist, space ranger Jackelyne, can’t manage to reach her destination on time, then the picturesque city of New Barcelona will be doomed. 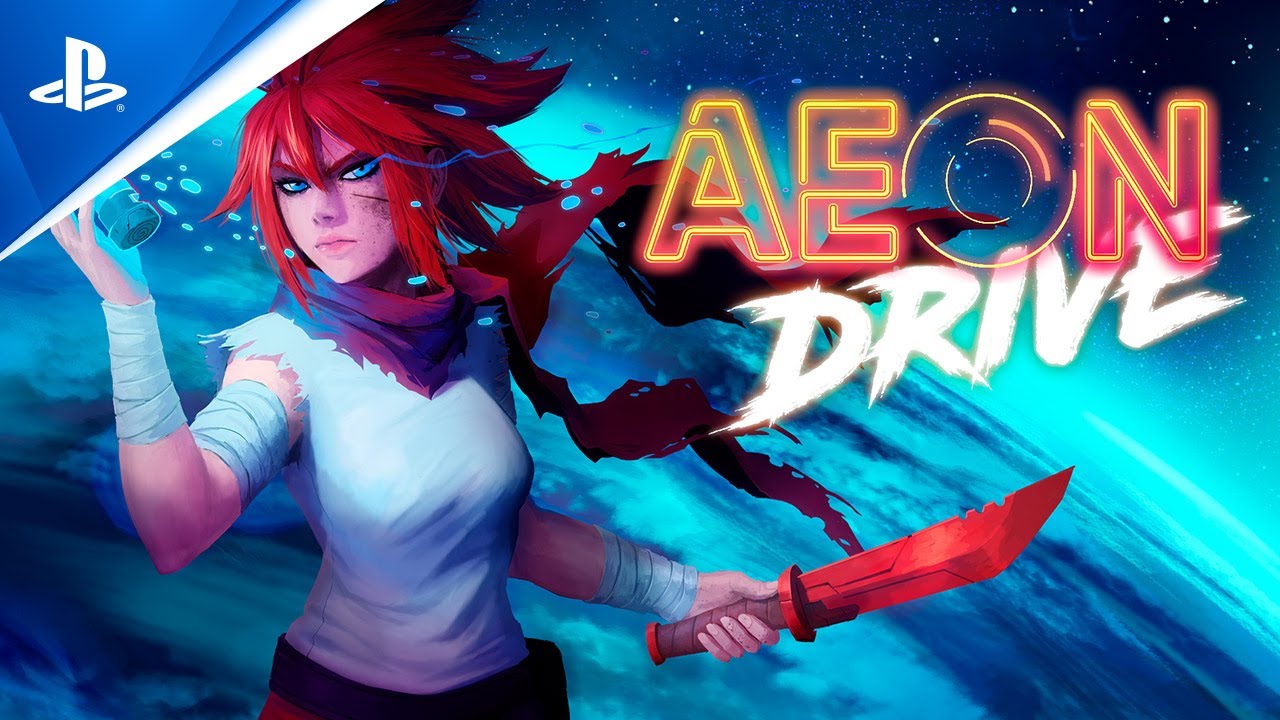 The task is quite feasible — but only if you know what you are doing. So we’ve put together these few tips — so that when the game launches, you have a better chance of saving the world on your first try. Or on the second one. Or the third… 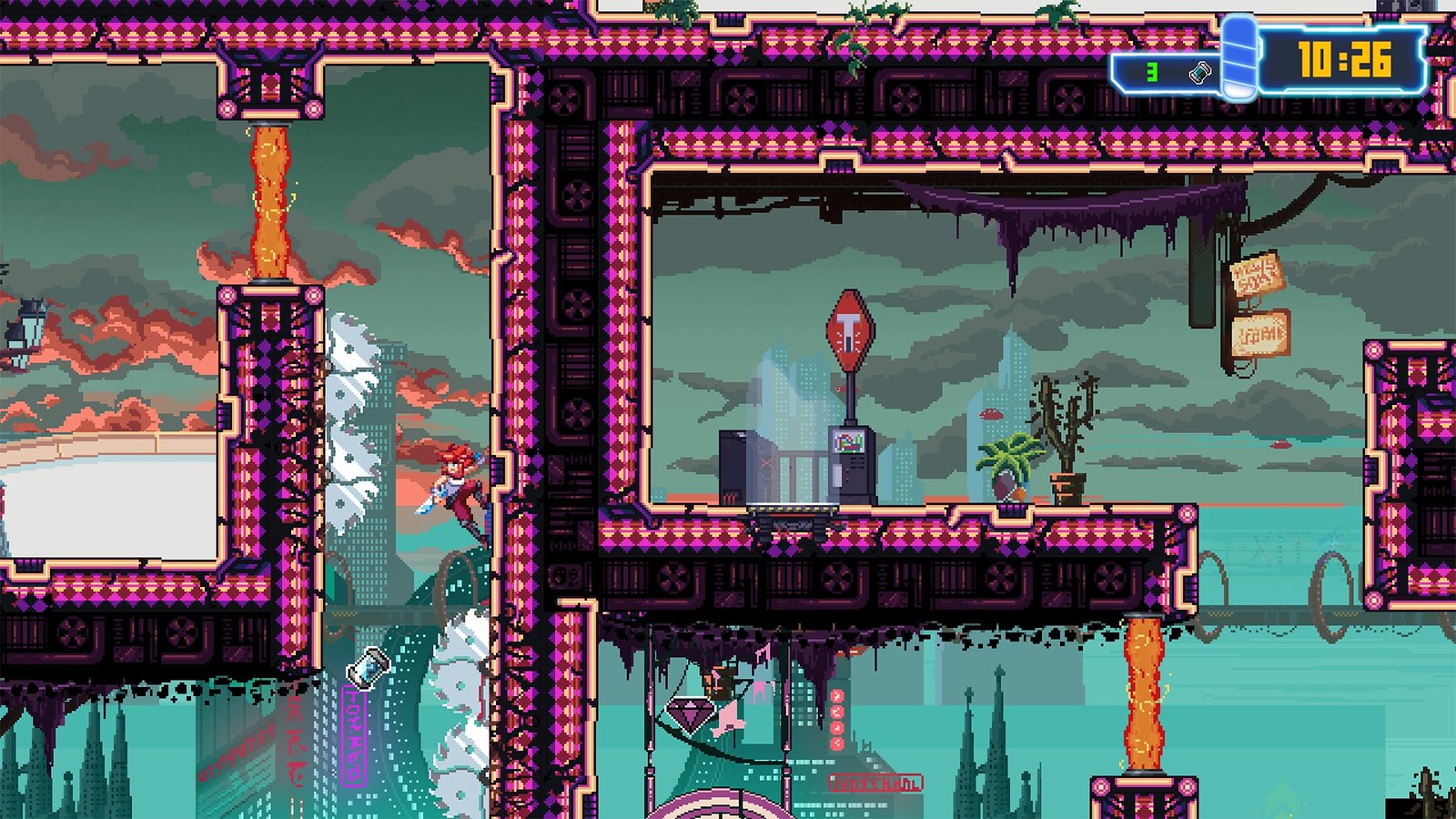 Each level in Aeon Drive is challenging to complete on the first try — most likely, 30 seconds won’t be enough to find the optimal route. But that’s the most exciting part of the game!

Jackelyne is in a time loop, which means you can make new attempts for as long as you want. A new attempt starts as soon as Jackelyne dies or the timer expires. 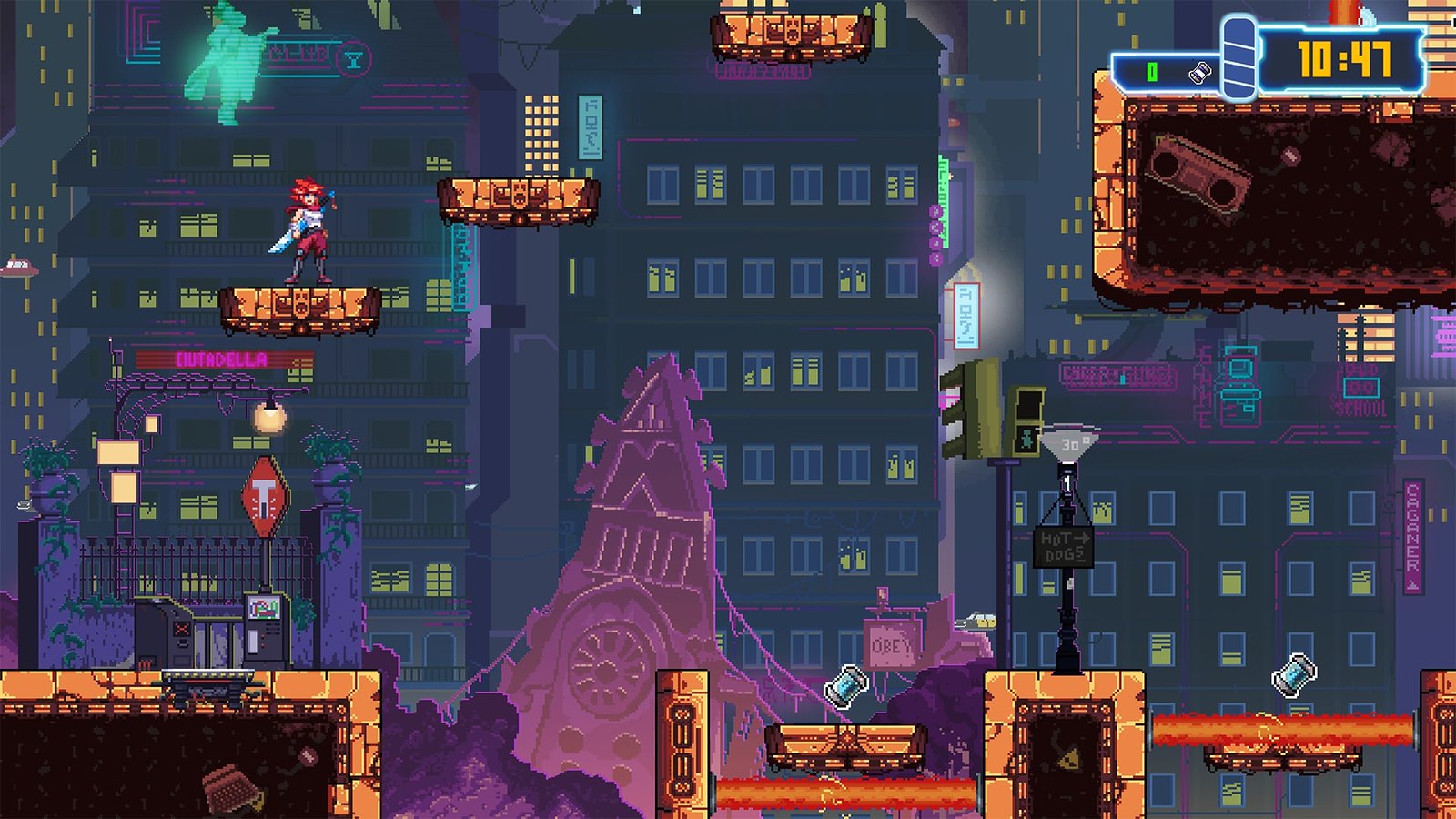 Jackelyne has a teleportation dagger — she can throw it in any direction and instantly move towards it. It’s a really useful piece of technology: thanks to it, you can instantly fly over a huge gap or reach the ceiling.

This ability is essential: thanks to teleportation, you can overcome a laser trap, which would otherwise kill you, or get to an otherwise inaccessible place. In addition, by constantly teleporting, you can move much faster (duh!) — don’t forget that each run is limited by a 30 seconds timer.

Did we already mention that you need to complete the level in 30 seconds? Actually, it isn’t entirely true. Jackelyne can control time, so sometimes, she cheats a little by adding some extra time to this limit.

But it’s not that simple: to get the precious extra seconds, you’ll need to collect time capsules scattered throughout the level, and this can take, well, time! In addition, these capsules need to be activated, and it is not so easy when you are constantly running somewhere, jumping, teleporting, and fighting enemies. To sum things up, in this race against time, you won’t be able to win unless you learn to control time itself! 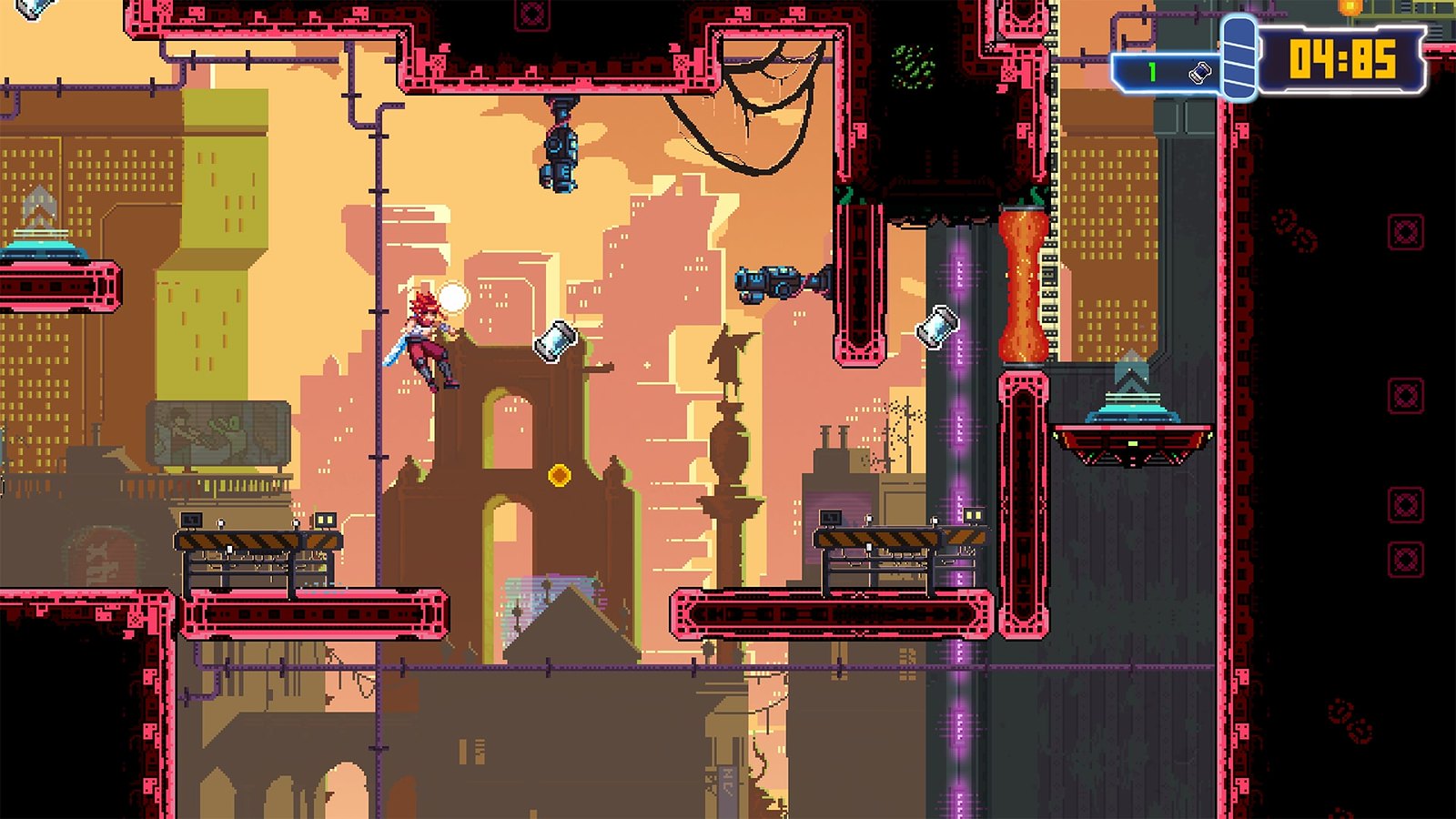 The streets of New Barcelona are patrolled by dangerous robots. Your first instinct would probably be to attack them. After all, Jackelyne is exceptionally effective at dealing with them, thanks to her power sword. But it isn’t always the best idea: these precious seconds spent in a battle could probably cost you the whole attempt. Sometimes it is wiser to bypass the robot or run away from it — this could save time and won’t expose yourself to additional risk.

Jackelyne has only one hitpoint: if an enemy robot manages to strike at her, she will die immediately. It’s like in real life… With the exception that Jackelyne can start all over again as many times as she wants. But you should still act carefully — otherwise, you won’t be able to complete the level. 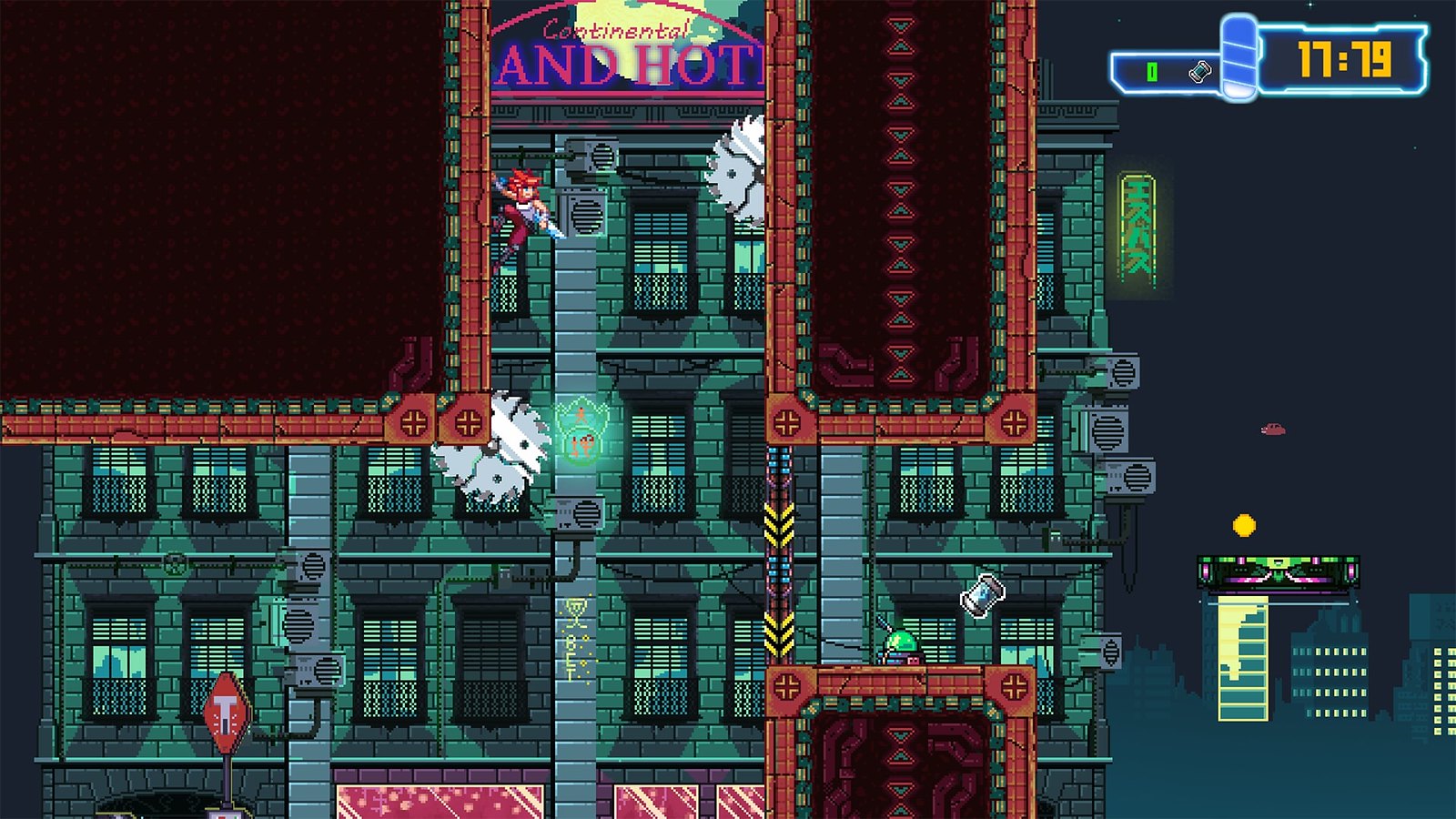 If you’ve failed several similar attempts in a row or if the path takes too long, then it may be a good idea to try a different route. It will definitely be more exciting and more effective than repeating the same actions over and over again.

Each level in Aeon Drive can be completed by taking several routes, some less obvious than others. The more familiar you are with the game, the more options you will see, and the more effective routes you’ll be able to use. 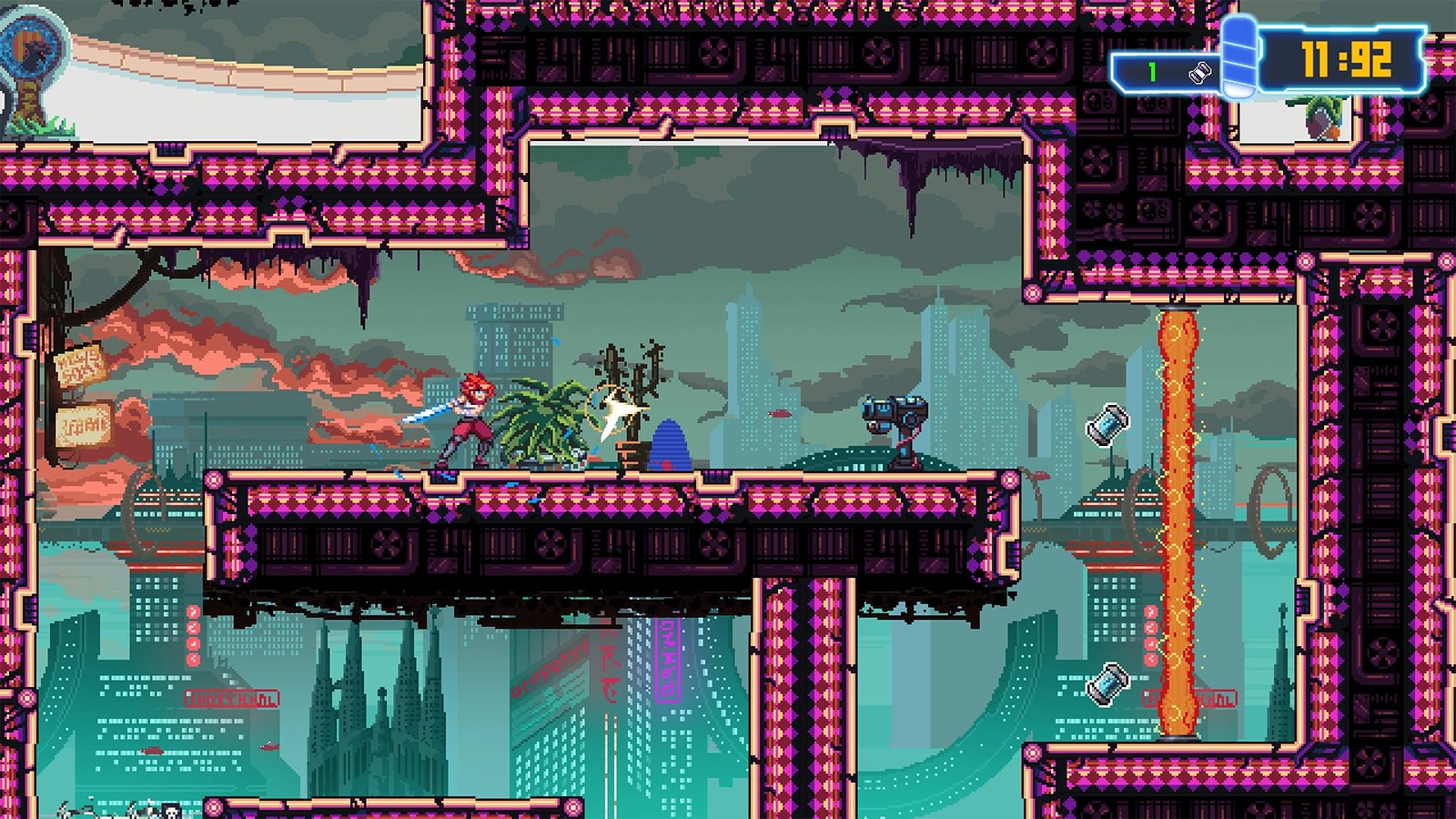 If you’ve managed to complete the level — congratulations! But that’s just the beginning: Aeon Drive is called “a speedrun platformer” for a reason.

Are you sure that you’ve completed this level in the most efficient way? Maybe you could’ve cut some corners, perhaps you should’ve teleported instead of running in a few places, or maybe you’ve spent too much time getting over some obstacles? Anyway, there is always a reason to try once again!

The game keeps track of your results with a leaderboard: you can always compare your performance to the results of other players. And maybe one day you will find yourself at the top — if you’d set such a goal. Or just call your friends and compete with them in the PVP mode to find out who is the fastest ranger in New Barcelona!