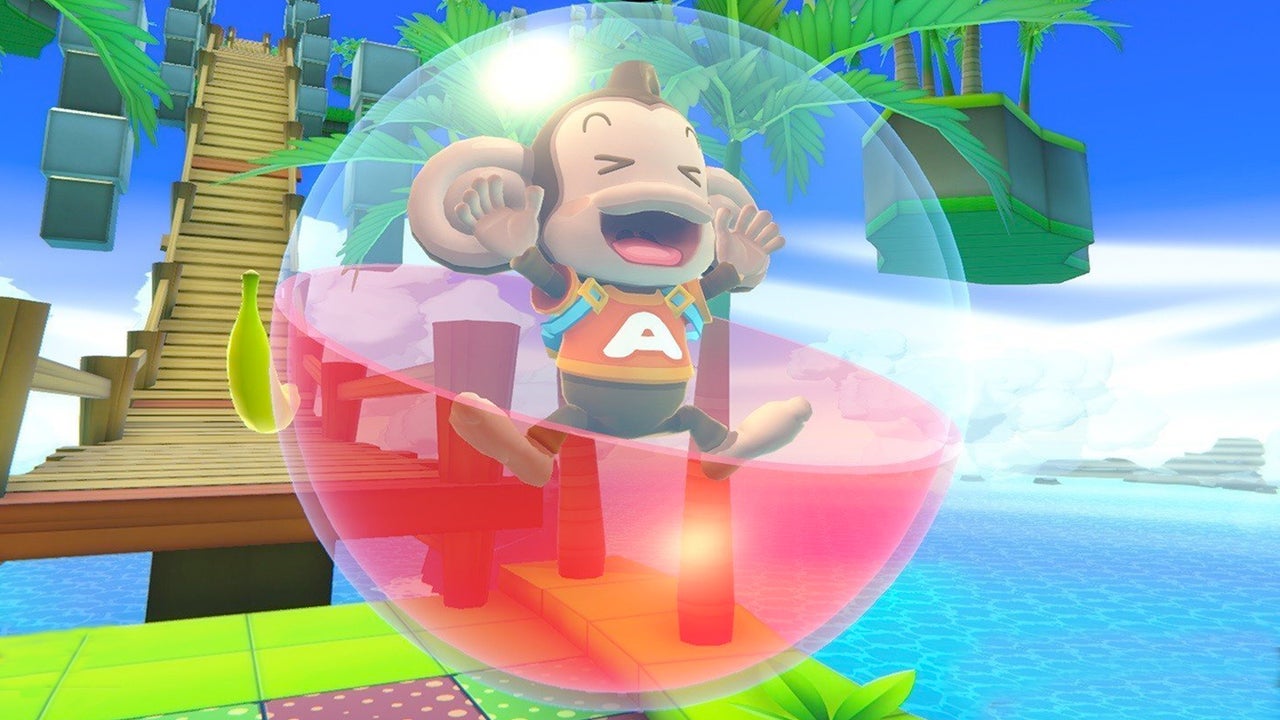 Nostalgia is a funny thing. It can be a comforting sensation, but it sometimes makes things from the past seem better than they actually are. Unfortunately, the latter is the case with Super Monkey Ball: Banana Mania, which compiles over 300 levels from previous Super Monkey Ball games and updates them for modern consoles. I have fond memories of playing the GameCube versions with friends nearly 20 years ago, so I expected Banana Mania to be a welcome return to those carefree nights staying out past curfew and rolling down increasingly difficult courses. Sadly, rollin’ just isn’t as fun as it used to be.

As the name implies, Super Monkey Ball is a series about monkeys in balls rolling their way through hundreds of stages and avoiding increasingly difficult obstacles – and yes, it’s exactly as silly as it sounds. The GameCube-era graphics have gotten an overhaul that makes the cartoony art style more vibrant than ever, and I found it hard not to bop my head to the arcadey theme music. It’s always refreshing to see games that don’t take themselves too seriously in this era of increasingly realistic graphics and serious subject matter, and Super Monkey Ball is anything but serious.

Because Banana Mania is a mash-up of several previous Super Monkey Ball games, there appears to be an almost overwhelming amount of content at first. There’s the Story mode originally seen in Super Monkey Ball 2, which is less a cohesive campaign than it is about 100 levels across 10 worlds loosely stitched together with brief, dialogue-free animated cutscenes. Challenge modes from the first two Super Monkey Ball games appear as well, although the separate modes have some startlingly similar courses. And of course, Challenge mode doesn’t feel significantly different from Story mode gameplay-wise because the only twist is that you can’t pick up where you left off — you have to get through all of the challenge stages in a single sitting. So it’s more a challenge of endurance than anything else.

The problem is that, after 30 or 40 levels, it begins to feel like a slog.

The problem with both the Story and Challenge modes is that, after 30 or 40 levels, they both begin to feel like a slog. The difficulty in Story mode really ramps up around the halfway point, going from light and breezy to a frustrating exercise in failure very quickly. Early levels might challenge you to make your way around a winding path or keep your momentum going long enough to clear a gap; later on, you’ll be thrust into the air by spring-loaded platforms and fail the level before you even have a chance to adjust the camera to see a hazard you didn’t know would come at you from that direction.

That’s exactly what happened in one of the levels that made me want to pull my hair out: before me stood a towering theme park ride made up of platforms connected to a pole in the middle. Because you can only tilt the camera up so far, I couldn’t see where the finish line was — instead, I had to roll onto a ground-level platform that thrust my ball upwards and try to figure it out in the air. The first time, I was thrown directly into a connecting pole and bounced off the map before I even had a chance to move. Other attempts ended after I landed on one of the higher platforms and bounced right off again. When I finally managed to land in the right place and stay put, it didn’t feel like I’d mastered the obstacles of that particular level; it felt like a lucky run that I wasn’t sure if I’d be able to replicate. If only a few levels were designed like this it’d be easier to dismiss that feeling, but after the halfway point most of them start to feel this way.

And while the environments and backgrounds might be fun and colorful, much of the playable level design is repetitive and uninspired. The more I played past a certain point, the more it felt like a chore. What’s especially draining is that after finishing a particularly difficult level, there’s no satisfying adrenaline rush that accompanies overcoming a challenge — just a sense of relief that it’s finally over. Super Monkey Ball could’ve learned a thing or two from Peggle about dispensing serotonin.

It’s telling that the developers actually included a couple of ways to deal with particularly tough levels. There’s a Helper mode that doubles the time limit and provides a visual path to the goal, which can be useful but usually doesn’t negate the bigger issues. It’s usually not a matter of understanding where the end goal is — getting there through trial and error or dumb luck is the problem. I can’t tell you how many times I just blindly rolled forward as quickly as possible, hoping that it would get me closer to the end, because every other strategy ended in failure. There’s also the option to skip a stage entirely, which is especially nice because it ensures that you’re never stuck on one frustrating level for too long – assuming that you don’t run out of the points you need to pay your way.

You can earn points in various ways, but the most prominent are simply beating levels and completing certain challenges, like collecting all of the bananas in a stage. The Point Shop is where you’ll use those to unlock new characters, adding to the initial six-character roster of AiAi and his monkey menagerie. (Every character plays the same, but at least they look different.) You can even unlock a few non-monkey characters from other Sega games, like Sonic the Hedgehog, Jet Set Radio’s Beat, and Kazuma Kiryu of Yakuza fame, and playing as one of them even changes the bananas on each level to items from their respective games — rings for Sonic, spray paint cans for Beat. It’s a thoughtful touch, although the flipside is that these special characters can’t be customized with new outfits like the monkeys can.

Looking back at my personal experience, the Super Monkey Ball games have always been at their best as party games, and that continues to be the case with Banana Mania. Party mode has a dozen mini-games, and most of them are genuinely fun and have surprising depth when played against other humans; for example, the Mario Kart-esque Monkey Race game has 12 tracks and multiple gameplay modes, and Monkey Golf has regular and mini-golf variations. Super Monkey Ball: Banana Mania is one of the few games to offer same-system multiplayer in a time when almost everything is online-only, making party mode easily its most redeeming quality.

As a solo experience, however, Super Monkey Ball: Banana Mania falls flat. More than once, I found myself wondering why I had liked these games so much when they first came out. Playing on PS5, I even turned on motion controls to try to replicate the magic of the early Wii game Super Monkey Ball: Banana Blitz, but that was a complete disaster. The simplest tilt of the DualSense controller had stages careening to the left or right, sending my monkey balls flying. It’s a shame that Banana Mania didn’t live up to the Super Monkey Ball experience in my memories, but times have changed; maybe it’s time this series touched a strange black obelisk and evolved, too.