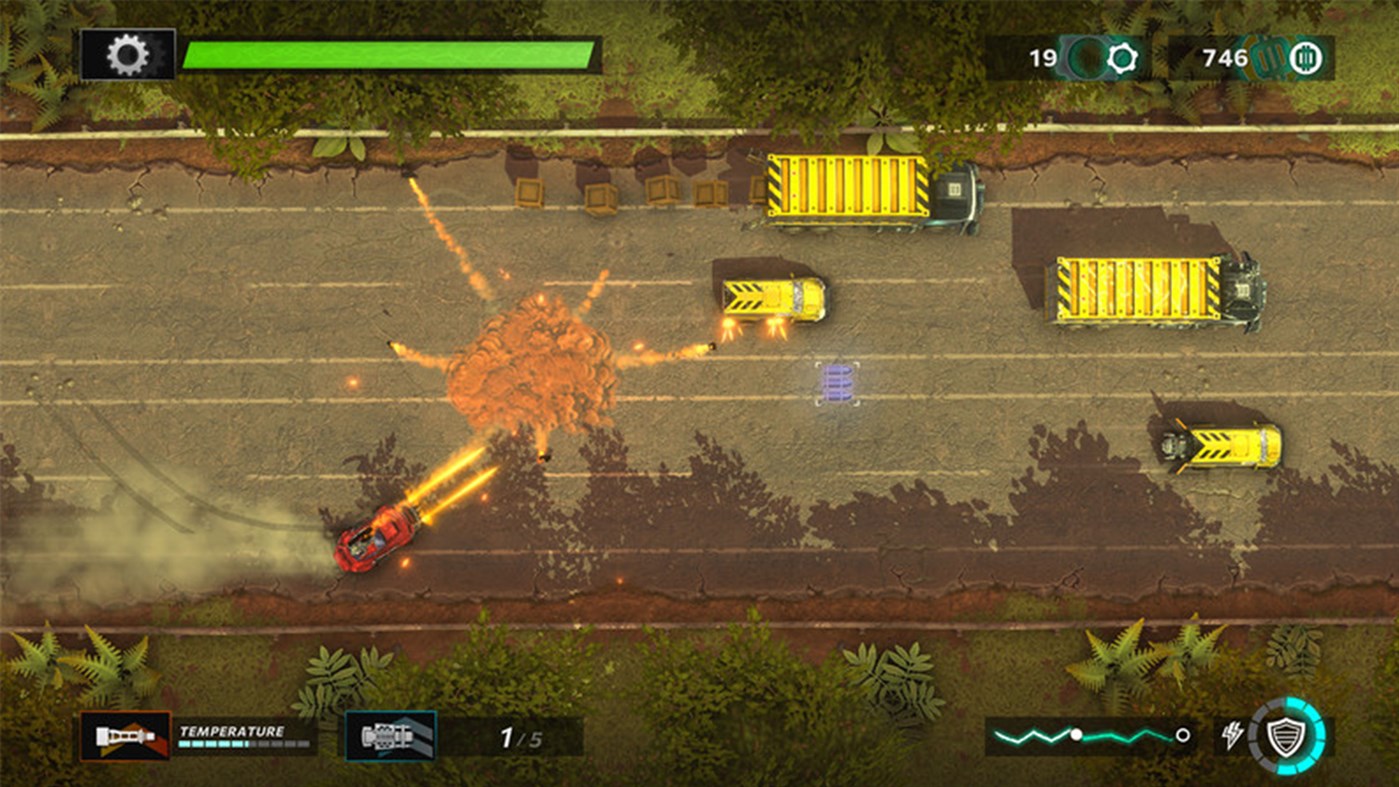 Drive. Destroy. Get Paid. Upgrade! Not only is this the core gameplay loop for Gearshifters on Xbox, it is also the mantra of this new post-apocalyptic vehicular combat game. Best of all, it is available to download today on Xbox, PlayStation, PC and Nintendo Switch.

The Collapse has happened. Capitalism and democracy are no more, and the world outside is as hostile as it has ever been. As a driver known only as Gearshifter, you must deliver critical packages to those in need in the neutral zones, all whilst searching for the fabled Citadel. Can you discover the world-changing secrets this mysterious place holds?

Gearshifters is a top-down arcade shoot ‘em up housed in a vehicular combat game. Your car can steer, drift, shoot, spin and smash through waves of enemies and some terrifying mechanical monstrosities in the form of bosses. Complete a delivery and earn money to upgrade your car with over 100 different upgrades. Take the fight to those that stand in the way of your destination through procedurally generated levels across nine different environmental zones on your way to the Citadel.

The latest title published by Numskull Games looks to offer the same fun gameplay we have come to expect from them with previous releases such as Tin & Kuna and Battle Axe. So, expect a review very soon.

The arcade-action shoot-‘em-up rogue-lite Gearshifters is available to download now on Xbox priced at £22.49. Are you ready to take on all the wastelands have to offer to find the Citadel? Let us know in the comments below!

An arcade-action shoot-‘em-up rogue-lite. Steer, drift, spin, smash and gun through waves of enemy vehicles. Go to war against extreme-machine bosses. Build up and tune your tactical loadout of car mods, defences and weaponry for each treacherous transport mission. Drive. Destroy. Get Paid. Upgrade! DRIVE and DESTROY. Employ precision control and expert driving skills to race rings around foes, dodge incoming projectiles, and unleash intense attacks. High-octane action at every turn, slide, and spin. MEGA-VEHICLE BOSS BATTLES. Defeat the lawless factions that dominate dystopian future Europe, and take down their insane, heavily armoured boss machines. GET PAID and UPGRADE! Tackle dangerous delivery missions to ensure the safe arrival of precious cargo. Get paid, and modify your car with offensive, defensive, cosmetic, and performance-based customisations. EXPLOSIVE DELIVERY. Expand your territory across the post-apocalyptic continent. Only the most skilled Gearshifter can take on the most perilous routes and reach the mysterious Citadel. – High-intensity physics-based top-down vehicle combat. – Procedurally-generated roadways and enemy waves. – Fight across 27 stages through 9 environmental zones, each with its own faction and complement of opponents. – Customise your combat vehicle with over 100 randomly-unlocked upgrades. – Story arc across five acts. – Standard, Arcade and Deadly (perma-death) game modes. – Vibrant top-down 3D world. – Original soundtrack. – A range of accessibility options.