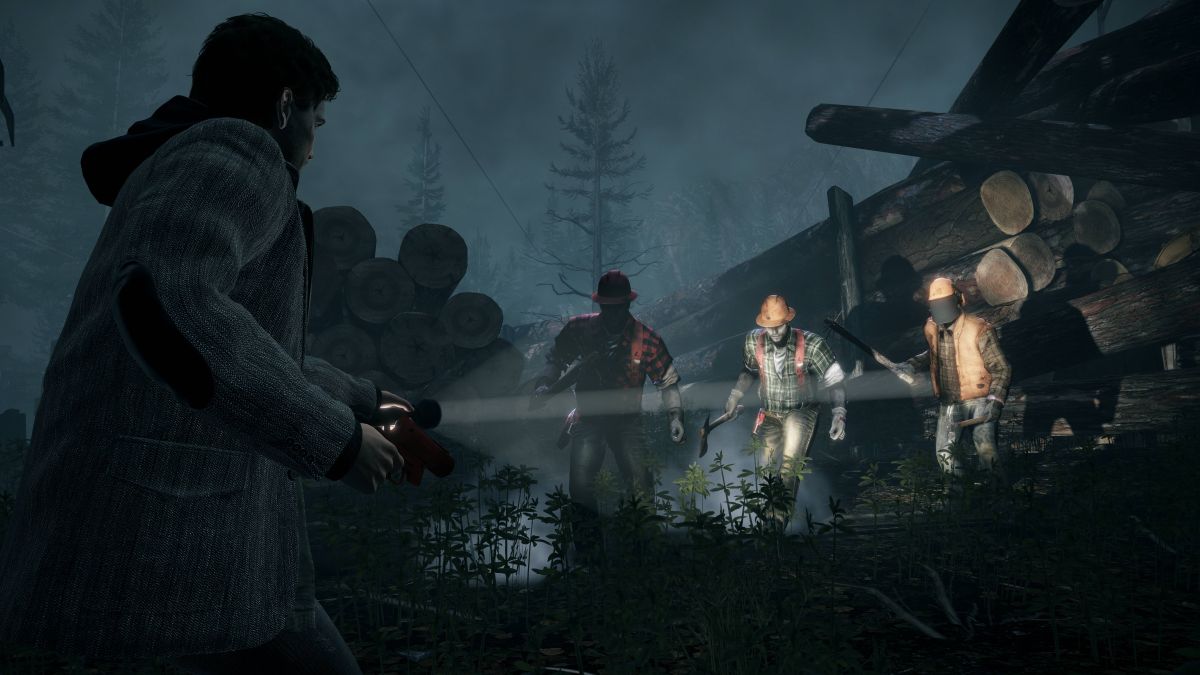 After burning through countless flashlight batteries, hearing one too many metaphors, and inevitably failing to find every Thermos flask full of coffee scattered throughout the world, Alan Wake Remastered serves as a fitting reminder of just how brilliant Remedy Entertainment’s psychological thriller was all those years ago.

Released exclusively for the Xbox 360 in 2010 and later ported to PC, Alan Wake is the type of game that seemingly only the storytelling aficionados at the Finnish studio Remedy could make. From Max Payne to Quantum Break and more recently Control, developer Remedy tends to focus on creating a compelling plot that ultimately dictates the game’s mechanics.

In Alan Wake, the game’s story revolves around darkness and light but is also interwoven with the struggles of a successful author. It’s this achingly simple premise that provides the foundation for everything in the game, and it still feels remarkably fresh more than a decade later.

You play as the titular Alan Wake, a best-selling author who’s struggling to overcome a two-year bout of writer’s block. In a bid to shake off the cobwebs and hopefully get the cogs whirring again, Alan decides to take a much-needed vacation with his wife, Alice, to the peaceful, Pacific Northwest town of Bright Falls.

It turns out that Alan’s fame precedes him, however. He’s immediately recognized by many of the residents of Bright Falls who have read his novels, but perhaps mercifully for Alan, the couple won’t be staying locally. Instead, Alice has rented a secluded lodge outside of town at Cauldron Lake, which should give them all the privacy they need.

Upon arrival, Alan discovers a typewriter awaiting him in the lodge’s study. Even though this trip was supposed to let Alan escape the pressures of having to write and other day-to-day distractions, it turns out Alice had other ideas, who hoped the change of scenery would help encourage Alan to finally break through his writer’s block for good.

Unsurprisingly, despite Alice’s good intentions, a lover’s tiff ensues. Incensed at Alice’s actions, Alan storms out of the lodge into the night air knowing that Alice won’t follow due to her fear of the dark.

In the midst of trying to calm down, Alan suddenly hears Alice let out a spine-tingling scream. Concerned for Alice’s safety, Alan rushes back to the now pitch-black lodge, flashlight in hand, only to catch a glimpse of his wife being dragged into Cauldron Lake’s murky waters by some mysterious figure.

Instinctively, Alan dives into the lake’s depths but shortly loses consciousness. He awakes behind the wheel of a wrecked car one week later, dazed, confused, and desperate to find Alice.

Alan quickly discovers that his search for Alice won’t involve filing a police report and scouring the lake for any signs of her existence. Unfortunately, the once idyllic setting of Bright Falls is suddenly fraught with danger as darkness has enveloped the pristine mountainside town like a suffocating cloud of smoke. To make matters worse, Alan is now being pursued by a terrifying threat known as ‘the taken’: an evil force that can construct itself into human form, flocks of birds, or even inanimate objects.

These shadow-bound foes are protected by a shield of darkness which makes them invulnerable to gunfire. But, thanks to some help from an unknown stranger, Alan soon discovers that by using various sources of light – be it a flashlight, flare, or flashbang – he can rid these fiends of their protective coating and make them vulnerable to attacks.

Alan Wake’s combat is instantly intuitive, then. Shine your light on an enemy, and attack when their defenses are down. But tension and strategy are provided by the need for careful battery and ammo management. You’ll often be ambushed at a moment’s notice that significantly ups the ante, and provides one or two jump scares in the process.

Your flashlight gradually loses charge when it’s shined at full power, something that is necessary to strip the taken of their shields before they get up close and personal. Batteries are crucial to your survival, as you’ll need to keep an eye on how much juice is left in your flashlight when in combat. Run out of power, and you’ll quickly find yourself facing an ever-encroaching invulnerable enemy.

When not in use, the flashlight will slowly regain charge, but batteries are of the utmost importance if you’re to keep your defenses up. You can also pop a flare as a last line of defense, which is met by a beautiful cinematic moment as plumes of red smoke fill the screen.

Quick on your feet

Alan Wake Remastered’s gameplay also attempts to heighten the scares by urging you to reload quickly. When you’ve shot every bullet in the chamber, Alan will begin to automatically reload. However, by tapping the reload button quickly, Alan will frantically reload with added haste, shaving off some much-needed seconds before the taken have a chance to close the gap. It’s a simple but effective mechanic.

When things get particularly heated (and it often will), Alan has the ability to perform a dodge. By pressing the run button and a directional command when under attack, Alan will duck and scamper away from an enemy’s attack if you time it just right. Dodging admittedly takes a bit of getting used to, but it’s an ability that you’ll soon come to rely on as the game’s difficulty increases. Don’t try running away, either, as Alan has the cardiovascular fitness of a geriatric smoker.

Should the hordes of the taken become too much for your flashlight and revolver to deal with alone, help can often be found in your surroundings. Portable, powerful lights can be turned on temporarily, and generators can be started to help battle the forces of darkness. Remember: always use the light to your advantage.

Though Alan Wake Remastered couldn’t be described as an open-world game (even though it started out that way in development), the game encourages you to venture off the beaten path whenever possible. The game is littered with additional lore, collectibles, and manuscript pages to find from Alan’s new novel “Departure”, which he doesn’t remember writing. As the player discovers the missing pages, many of which are not in chronological order, they can often provide a glimpse of how the story will unfold.

Alan’s internal monologues also accompany the player, similar to how Remedy’s hard-boiled detective, Max Payne, would relay his thoughts. Alan’s mutterings act as an effective mechanism for forming a bond with a character who unforgivably wears a hoodie and a blazer at the same time.

Fundamentally, Alan Wake Remastered is the same game from 2010 but it has been touched up so it runs and looks better than ever before. The game’s beautiful new lighting engine has the most meaningful impact, along with the new character models that make the aging cast look a little easier on the eye. The 4K resolution and 60 frames per second target also ensure the game looks crystal clear and feels far more responsive than the sub-HD, 30fps original.

One disappointing omission is the lack of HDR support. The game’s play on light and dark seemed like the perfect fit for the magic of high dynamic range to shine, but alas, Remedy didn’t deem it necessary to include it.

Of course, as part of Alan Wake Remastered, you also get both pieces of post-release downloadable content, The Writer and The Signal, along with some video commentary from the developer.

If you haven’t shined a flashlight in the face of a taken or fired a flare gun into the night sky, you owe it to yourself to give Alan Wake Remastered a try. Remedy’s unique spin on the survival horror genre won’t leave you shaking in your boots, but it will keep you on tenterhooks until the very end with its enthralling story and satisfying spin on survival horror action. Shine on, Mr. Wake.