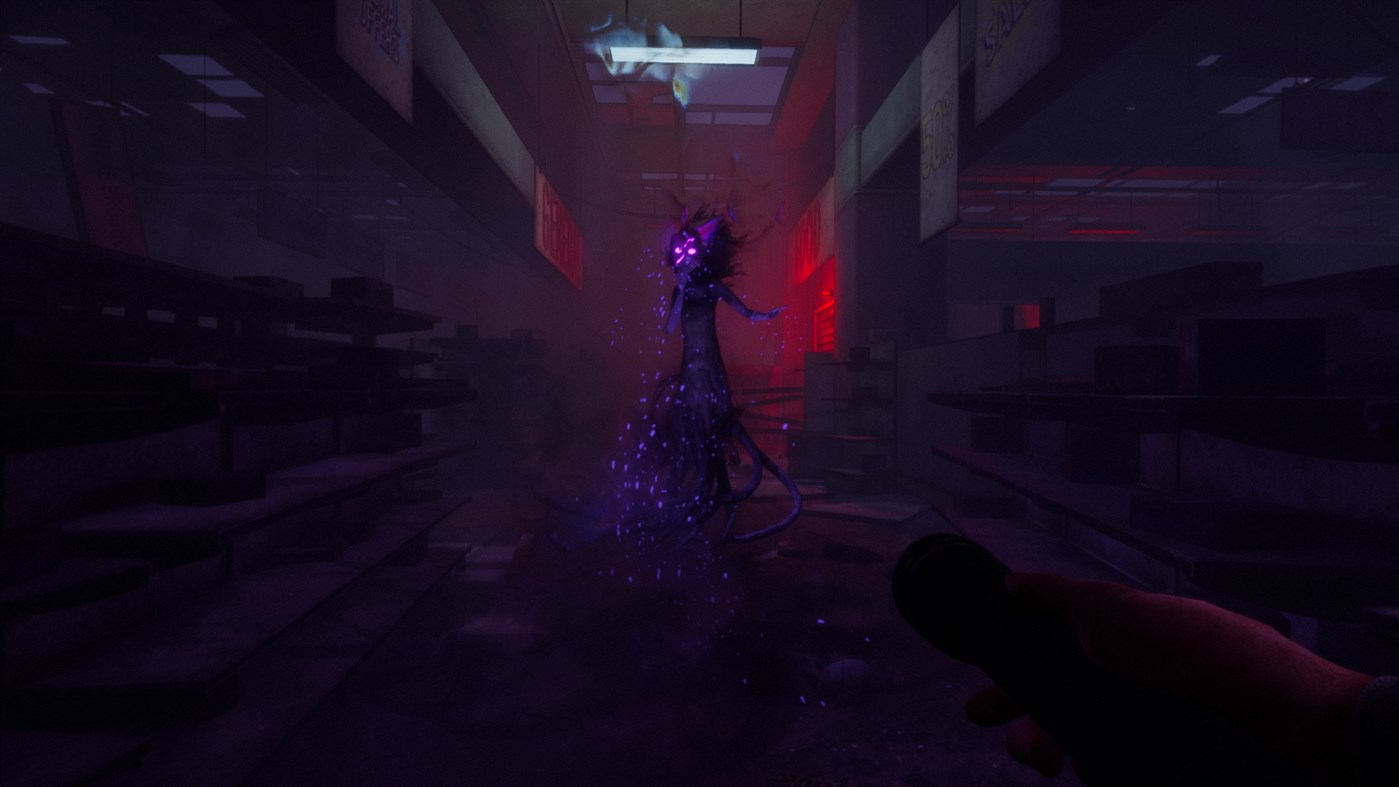 Horror or panic are common enough emotions when playing video games, but paranoia is exceptionally hard to achieve. You’ve got to show enough restraint to not dump jump-scares on the player, to not festoon the game with combat encounters and rocket launchers. Horror games so often skew to one or the other, and rarely leave room for paranoia to creep in.

In Sound Mind may not be perfect, but it’s one of the most paranoid games we’ve played. It has a dufflebag full of ways to make you go “huh, what was that?”, and it employs them with abandon. The Spook, a kind of shadowy slender man, creeps around on the periphery of the screen, never getting involved but putting you on edge. The world shifts and changes when you’re not looking at it. Mannequins are flipping everywhere. Some areas, like an old lighthouse, are oppressive, flickering their lights and holding back their horrors.

In fact, In Sound Mind is so patient with its scares that it’s hard to classify it as a horror game at all. It’s got all the trappings, but this is more a game of psychological paranoia. Think The Shining more than Texas Chainsaw Massacre, Alan Wake over Resident Evil.

Developed by relative newcomers We Create Stuff, In Sound Mind looks and feels more ambitious than its indie background suggests. This is an eight-to-ten hour experience in a first-person viewpoint that is normally the province of AAA games. It’s an outright X|S game, and – while it does have it’s clumsy or janky moments – you could have told us that it was made by a major studio and we would have believed you. Undoubtedly you’ll hear news soon that We Create Stuff has been bought by Microsoft or Sony.

You play as Desmond Wales, a psychiatrist who finds himself locked in a creepy, alternate version of his apartment block during a flood. As is the common horror trope, he’s got no memory of how he got there, so you will have to guide him through a surprisingly rigid and circular structure to find out what’s going on. Your apartment acts as a Metroidvania-lite hub with rooms both available and not available to you right now (a gas mask waits frustratingly out of reach), and scattered about the apartment are cassette tapes.

These tapes are recordings of interviews with your patients. By playing them, you jump into a proxy of the patient’s consciousness, where their various mental illnesses manifest as terrible creatures. The first tape and patient, Virginia, takes you to a supermarket, which is being haunted by an apparition. The apparition can be pushed back through the use of mirrors, in a neat Medusa-like mechanic where you can use a mirror-shard to see what’s going on behind you. She is afraid of her own reflection, which echoes the patient’s fears of being seen, thanks to a facial scar.

Defeating the patient’s psychoses as a kind of boss, you’re chucked back into the apartment, often with a new toy to open up locked areas, where you can find the next tape. Then the cycle continues, allowing you to find out more about yourself, and whether you may have been a factor in the patients’ degradation.

What makes In Sound Mind so refreshing, outside of the whole paranoia thing, is how varied these levels feel. Some move at an incredibly slow speed, encouraging exploration, while others move at a breakneck pace, forcing you to move to stay alive. Colour palettes change completely. The mood shifts. In some latter parts of In Sound Mind, the game is hilarious, including the best use of a cat since Captain Marvel. There’s no tonal whiplash, as the paranoia is constant throughout, but it means that the template-driven narrative structure still has the ability to surprise. We were never bored playing In Sound Mind.

It’s greatest moments are in the puzzles, sometimes small and other times taking the form of an entire level. There’s an intricate sequence towards the end where you are using radio-controlled switches to shut down and power various parts of an electricity maze, and it’s a highlight. Throughout, there are these micro and macro puzzles, and they’ve been developed by keen minds.

But we were occasionally frustrated. In Sound Mind has two modes that it occasionally slips into, and we weren’t necessarily a fan of them. The first is its combat. It’s not to say that the controls or gunplay are bad, and the enemies are relatively rare, so they don’t disrupt the feelings of paranoia too heavily. But combat is leaden and sloggy, with a single enemy type in three different variants cropping up throughout the course. It got tiresome by the end, and we wanted In Sound Mind to take a position: either ditch the combat or improve it.

The other is an unhelpful love of labyrinths. We got stuck on a few occasions, simply because the pathing was a little off and there wasn’t a huge amount of guidance. We got the sense that we weren’t meant to be stuck, but we’d fallen off a path somewhere, and the art direction wasn’t quite good enough to nudge us to where we were meant to be. It happened enough times, and swallowed enough enjoyment, to mention it.

But these are blots on a rather clean jotter. In Sound Mind has so many endearing rough edges and interesting ideas that you hold onto its neck and enjoy the piggy-back ride. There’s the strange obsession with analogue tech, with more cassettes and telephones than I remember seeing in the average apartment block. There’s the goofy humour that sometimes rears its head, as a mannequin called Dave is positioned differently every time you look at him, helpfully guiding you to the next obstacle. And there are the visual flourishes, like the giant cassette tapes looming over the patients’ mindspaces. Oh, and we wouldn’t dare omit the fantastic soundtrack by internet-darling The Living Tombstone, which swoops from quirky to claustrophobic in the space of a few beats.

But more than all of this, In Sound Mind hears what a lot of horror fans have been saying for some time. Horror does not have to be jump scares. It doesn’t have to be Chris Redfield lock-and-loading incendiary rounds. It can be paranoid, drenched with atmosphere rather than blood, and if there’s anything that We Create Stuff should be proud of, it’s that they’ve absolutely hit this bullseye.

You can buy In Sound Mind for £29.99 from the Xbox Store for Xbox Series X|S

Images from the set of Amazon’s Fallout series have leaked
It looks like Kirby ate Fall Guys – and you can play the result next week
Experience a cinematic journey of exploration in Voyage
Kotaku: Nintendo of America’s female testers faced a “frat house” environment, including sexual harassment
Your Power is Unleashed! Goku Powers Up Fortnite x Dragon Ball