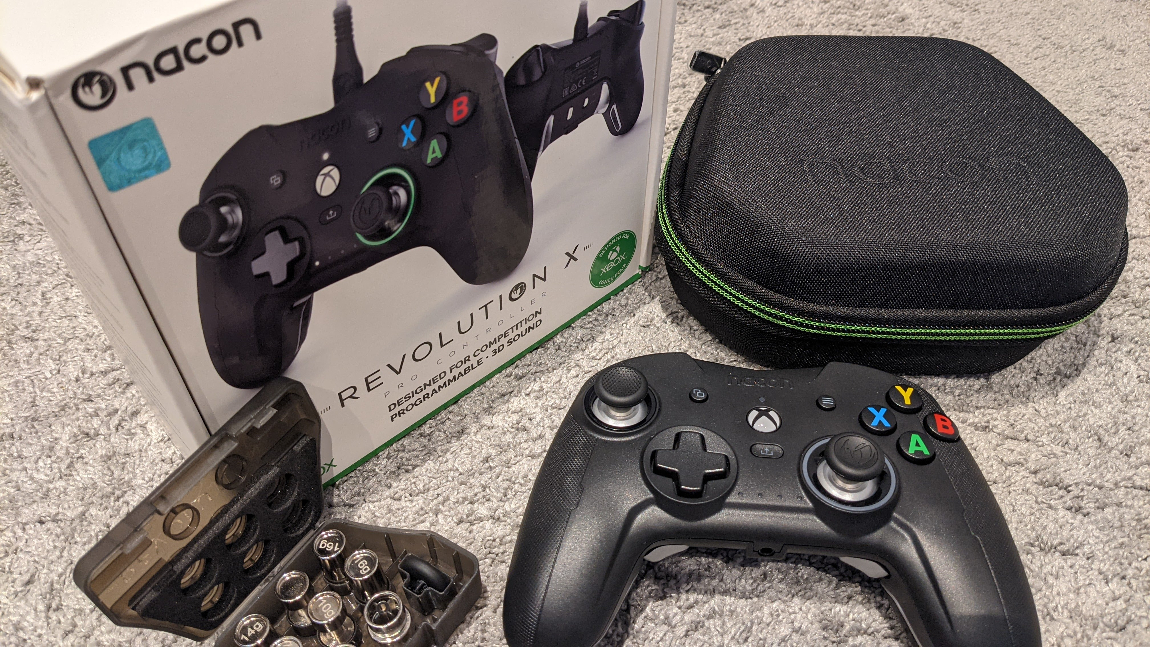 Nacon are on a bit of a mission, both in terms of filling the Xbox library with a host of games, alongside stocking physical store shelves with accessories aplenty. Hot on the heels of delivering their unique, but slightly-too-small-for-comfort, Pro Compact Controller to the masses, comes Nacon’s big gun – the Revolution X Pro Controller, Designed for Xbox.

That ‘Designed for Xbox’ tag and logo is a pretty big deal in gaming circles, if not for the everyday user, but for those more casual players; those who want a new controller but need confirmation that it’ll work nicely with Xbox consoles. It goes without saying that the Revolution X Pro Controller does just that and no matter whether you’re looking to just hop in to your favourite games with ease, or want to own the opposition in the pro scene, there’s certainly enough about the Revolution X to warrant consideration.

Yeah yeah, we know that the Xbox Elite Controller is possibly still thought of as the prime accessory for anyone really serious about gaming, but there are some, many in fact – me being one of them – who just don’t get on with the heft and weight that the Elite brings. And that’s where the Revolution X comes into its own.

Priced very competitively (you’re looking at just shy of £100 for this highly customisable product), the Revolution X Pro Controller is a fully wired option. Now, I’m getting that in here and out of the way as soon as I can because for many that’s going to be a deal breaker. In fact – personal case in point – I love the freedom that a standard wireless Xbox controller brings. I don’t game at a desk all day, I have consoles scattered around the land and want something that can just connect and be done with, without the worry of needing to be within a certain distance of the console.

Thankfully Nacon seem to understand this and whilst not able to provide a wireless controller, have ensured it comes with a 3 meter long cable (USB-A to USB-C) which totally powers the Revolution X. It’s detachable too for ease of carry and when you include the fact that this controller comes with its own little carry case, with space for the controller, the cable and some other bits and bobs, there’s pretty much nothing stopping you from getting your game on.

If you can handle a cable, you’re probably going to like what Nacon have done with the rest of the Revolution X Pro Controller – Designed for Xbox. All black in design and style, this is a third party option that is pretty close to the standard official controller that comes out of Microsoft HQ. It’s not exactly the same in proportions, but it’s close enough for you to not need worry about feel, comfort and button placement. In fact, the buttons here on this thing are well laid out with the thumbsticks and D-Pad, bumpers and triggers all very familiar.

The face buttons though are slightly different; a little enlarged over standard. This can only be seen as a positive and throughout time with the Rev X not a single button has been mis-hit. That is except for the Xbox Nexus button. Lower down into the chassis of the Revolution X, muscle memory instantly sees you reaching up for the all-encompassing Xbox button, with you needing to retrain your brain in order to find it more central.

That’s no biggy really though, it’s not like you’re reaching for the Nexus in the heat of battle and so Nacon can easily be let off the hook on this.

And they can be let off the hook because the rest of the Revolution X is brilliant. The feel of the bumpers and triggers (whilst unfortunately not textured) is great, with a nice flow from the former into the latter. But then include the four rear mounted buttons too and you’re getting into Elite controller territory.

Yep, Nacon have seen fit to work with a host of pro gamers and esports specialists to ensure button placement and ease of use is at the very forefront of what the Revolution X delivers. Honestly – coming from someone who likes familiarity and rarely needs to customise things – the placement of these buttons is superb. Two (the S1 and S3) sit on the back side, right where your third finger lays, whilst the other two (S2 and S4) kick in along with your fourth finger. This means all four buttons are immediately at hand, with little to no shifting of your hand placement in order to hit them. From using a good few varieties of controllers that utilise back buttons, I’d say the placement and integration on the Revolution X is up there with the very best. Perhaps it is THE very best.

Around the back are also a couple of other buttons and sliders. These feed into the different profiles that the Rev X allows, with you able to drop in four advanced gamer profiles should you see fit. These work with the free-to-download Revolution X App from the Xbox Store, with this allowing the chance to amend all manner of things. Expect to delve into the App and be greeted by a ton of adjustable sliders, button maps, trigger settings and more. The customisation that Nacon are allowing here is nothing short of immense and so if you feel the need to remap the response curves of either stick, the gates for the D-Pad, the amount of travel for your triggers or even switch off the additional vibration motors that are found in this controller, you can do. Why you would want to do the latter when they feel so good is beyond me, but there we go.

There is even the chance to mess around with some rather cool lighting that is situated around the right stick, with amendments to overall colours, and whether you want those lights to pulse or cycle in order to enhance the immersion.

With stock Nacon profiles in place for those wishing to feel the benefits without nerding out into the finer details, the Revolution X App is a well crafted piece of software which complements an equally well crafted piece of hardware. The two really do go hand-in-hand and should ensure that you get to play your games, your way.

There’s more though. As is now seemingly standard for a Nacon controller, Dolby Atmos support is built-in and this means that no matter what headset you have attached via the 3.5mm jack, you’ll be treated to the joys of Dolby whilst you game. There are also additional Audio settings available in the App, with equaliser settings ready and waiting for the finest sports, FPS, fighting, MOBA and chat players.

So, it’s safe to say that Nacon have nailed things with the Revolution X. However there’s one further thing that is available that we haven’t yet covered – the chance to physically amend the controller with weights and thumbstick additions.

Now, anyone familiar with these pages will know of my love for the thumbstick add-ons that the likes of KontrolFreek create; simple products that stick on to your controller and increase the feel and vibrancy of your thumbsticks. Nacon are nearly doing the same thing here by providing a small collection of highly engineered, carefully machined metal attachments.

There are new rings which go around the stick of your thumbstick to decrease the travel length, ensuring finer precision or sharper movement, whilst the rubber topped sticks themselves can be swapped out from the standard concave versions to some convexed options. Personally, I’ve found life as a concave gamer suits me just right, but know for a fact that others totally disagree, preferring a domed top to their sticks. You’re sorted if that’s the case.

It must be said that it is here where I’ve found the only real downside to the Revolution X (aside from the cable inclusion) and that is the fact the thumbstick tops don’t always feel secure. Initial removal of these is tricky, but once off, they are equally as hard to replace, and a good few times I’ve found the stick itself to come loose. Granted, once you have a setup to your liking (and remember we’ve been messing around taking these on and off in various forms for review), that situation should not occur, but it’s something to watch for.

The biggest inclusion though are three sets of weights. Coming in at 10 grams, 14 grams and 16 grams, these slide neatly into the cavity arms of the Revolution X (obtainable via a sliding cover just like a normal battery cover), letting you increase the weight of your controller to your own needs. As standard the Revolution X comes in at 231 grams (for comparison, a standard official wireless Xbox controller with battery pack weighs in at 270 grams), so there’s plenty to play with in terms of the additional weights. Again, on a personal level I’ve found the lightweight nature of the Revolution X to be grand, but have played around sticking the various weights into the arms (sometimes going utterly crazy and unbalancing it with different weights on each side!), to find this is a neat little option to have.

All this comes together to ensure that Nacon has created something for those Xbox gamers looking for some customization in their lives. The controller itself feels great in the hand, the button placements are awesome and the App integration is nothing short of highly detailed. It’s a shame that anyone using it will be tied down to a 3 metre distance from their console, but taking the brilliant price point into account and the amount of personalisation this allows, we can let that slide.

Huge thanks go out to Nacon for providing us with the Revolution X Pro Controller Designed for Xbox for unboxing and review. If you wish to pick one up for yourself either as you game on Xbox One or Xbox Series X|S, head over to Nacon direct.