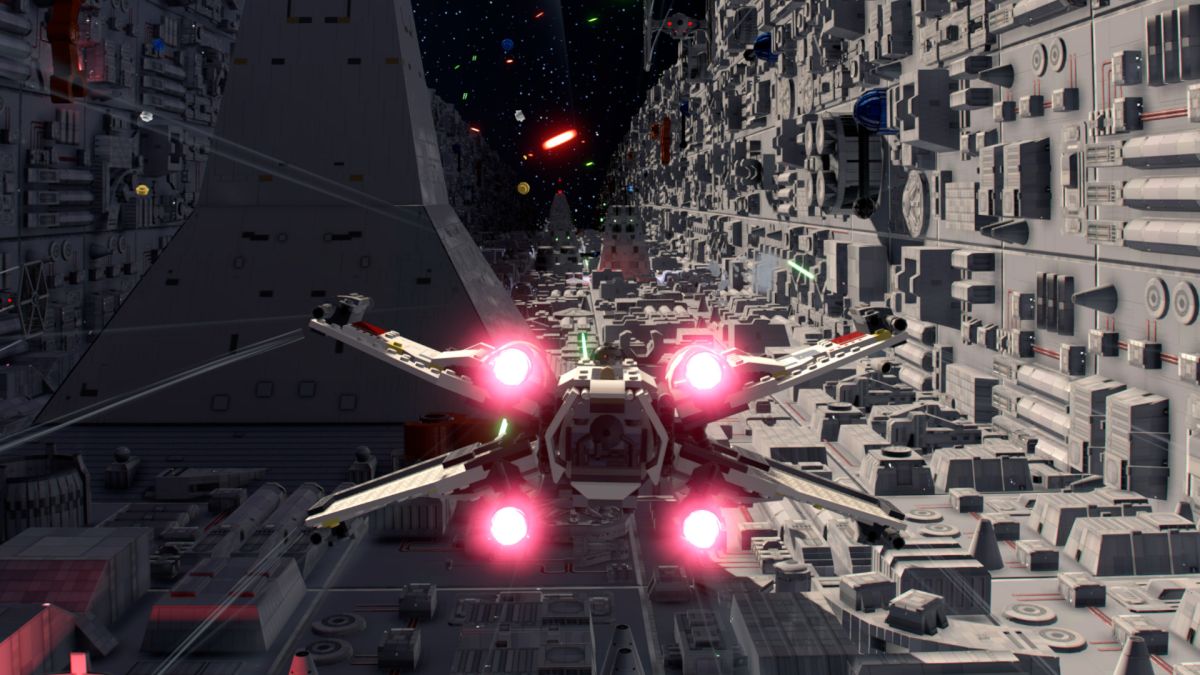 Lego Star Wars: The Skywalker Saga is finally here, after many years of teasing updates and crushing delays.

Developer Traveler’s Tales has recreated all nine of the mainline Star Wars films in its trademark charming style and we’ve spent the weekend getting in among the bricks to see how they stack up against other Lego games. There are hundreds of characters to unlock, overhauled combat to get grips with, flyable starships to pilot, and a whole galaxy to explore. The question is, is this the Star Wars game you’re looking for?

Your first decision in Lego Star Wars: The Skywalker Saga is crucial: which trilogy to start with. We opted for the prequel movies, not because they’re our favorite (shout out to the original trilogy), but because the first Lego Star Wars game covered the prequel films back in 2005 and we want to poke at that nostalgia (and see how the games compare).

After a classic Star Wars crawl about intergalactic taxes and trade blockades, the shiny, plastic forms of Obi-Wan Kenobi and Qui-Gon Jinn walk onto the screen in all their minifig glory. From there, it’s straight into what makes these games so charming: a cinematic that had us giggling immediately – Traveler’s Tales has lost none of its silly, self-referential humor over the years.

If you’re familiar with the films, you might expect to start the game in that alarmingly clean conference room that totally isn’t a trap. Instead, Skywalker Saga’s take on the Phantom Menace kicks off with you in full control of the Republic starship on the way to the negotiations. It’s a tease at how much bigger this game is than the 2005 original.

After landing on the Trade Federation’s donut-shaped starship, we walk around the large and ominously empty docking bay. A change that immediately jumps out is the camera, it now sits much closer to Qui-Gon than in the other Lego games, and it makes for a more intimate view of the action. We do what any self-respecting Jedi would do in this situation and begin to destroy every inanimate object in the room with our lightsaber. A little orange objective marker tries to get us to talk to a waiting protocol droid, but those boxes weren’t going to destroy themselves.

Qui-Gon swings his lightsaber with weight, easily eviscerating the random assortment of objects around the room; he feels powerful to play, more so than in the Lego games that have come before. Naturally, we can also use the force to pick up the crates and containers around the room, smashing them against the walls to make them explode in a shower of colors and Lego studs (the small plastic pegs you use as currency). You can also throw your lightsaber at enemies (and boxes), using the force to pull it back to your lego hook hand, making for a devastating ranged attack.

As soon as you open the Holoprojector, you get a sense of just how big The Skywalker Saga is. This menu screen shows a map of the entire galaxy, broken up into sectors. There are also tabs for characters (of which there are hundreds), ships, and skills. It’s a little overwhelming. But, as we became familiar with the game, it’s all useful information to have at your fingertips.

Surprisingly, the meeting room the protocol droid leads us into is a trap, but this gives us a fine opportunity to destroy things that fight back in a decidedly un-boxlike manner. We used the force to smash droids into one another, our lightsaber to slice them limb from limb, and accidentally blew ourselves up with an exploding barrel, it’s all ridiculously good fun. A major change to the traditional game’s combat is the introduction of a combo system that lets you link your attacks together, instead of just swinging your weapon around aimlessly. The combat overhaul makes fights feel smooth and reactive compared to previous games.

As the last battle droid falls, we sprint for the loading bay and smuggle aboard a droid invasion ship about to make its way down to the surface of Naboo. Keenly aware that we’re walking into the waiting arms of everyone’s favorite Gungan: Jar-Jar Binks.

A sightseeing tour of Star Wars

Naboo is host to multiple areas you’ll know from the films. You can explore the Gungan City, running around the place as an arms-flailing, tongue-waggling Jar-Jar Binks, hop into the Bongo ship and sail back to the planet’s surface while dodging giant monsters, and then, on the docks of the capital city, find a huge hub area to explore.

The royal city of Theed is packed with giant glistening statues, massive courtyards, and lush gardens. There are characters with little floating bricks over their heads who need tasks done for them. Completing sidequests, like fixing broken statues around the city, will reward you with Kyber crystals, a resource you can use to unlock character abilities. We were in a rush to save the Queen, though, so Theed’s statues remain unrepaired.

The ensuing rescue consists mostly of fighting waves of droid enemies all while keeping the Queen and her entourage safe from blaster fire. It’s a challenging fight to get to the royal ship, but we get on board and break for orbit, safe on our way to Tatooine.

After the clinical Trade Federation ship and grandiose royal city on Naboo, Mos Espa and its teeming streets are a wonderfully dense change of pace. We find ourselves slowly moving the camera to take in an environment that, despite being comprised mostly of plastic, feels alive. There are many little details that could go unnoticed, like the way Qui-Gon’s lightsaber hilt shines as it swings back and forth under the harsh twin Suns of Tatooine, and the way the dirt and sand of the desert planet realistically coat his little plastic legs. But, minor as these details are, they all add to the scene.

As we walk through the streets of the rough town, a brawl breaks out, with green-skinned Rodians coming out of the woodwork to attack us. This gives us a chance to try out the new shooting combat, as Padme is a fan of the blaster. As you aim down her gunsights, the camera goes in tight over her shoulder and a reticle comes up on the screen. This new style of aiming makes it meach easier to pull off headshots and blast off pieces of armor.

The Lego team wastes no time, keeping the action moving along, in about a minute of us arriving we go from buying parts for our ship to betting Anakin’s freedom on a Pod Race. Most players will be familiar The Phantom Menace’s story, so the pacey storytelling is refreshing.

That speedy pace does have its downsides, though. We’d happily spend more time pod racing, but it’s quite a short segment in the Skywalker Saga, and it doesn’t have time to breathe. Nor does it help that the controls were unintuitive, getting in the way of what could have been an adrenaline-filled interlude.

The new combat system comes into its own when we return to Naboo and take the fight to Darth Maul. Not only is it thematically on point and consistently funny, but the duel also offers a real challenge. With a mix of combo combat, quick-time challenges, and puzzles, this is the highlight of The Phantom Menace portion of The Skywalker Saga.

Completing the story unlocks the Galaxy Free Play mode, letting you return to the planets you’ve explored, though you can push on with the trilogy and roll straight into Attack of The Clones. As you get deeper into the trilogy, the action steps up both in challenge and complexity. As we work through the battle droid foundries on Geonosis and towards our battle with Count Dooku, we add more characters to our party, many with new abilities to learn and mechanics to master, and we face more objectives that are more complicated than anything we saw in the previous episode.

As you complete more of the story, you’ll find areas you went through before open up and offer more secrets to discover. The space sections you use to travel between planets will become free roam areas, which you can fly about using the ships you’ve unlocked. You’ll find Kyber Brick comets to explode for rewards and random encounters that can lead to even more loot.

There are loads of side missions to complete, too, awarding you studs and Kyber Crystals to upgrade your characters. For some of these quests, you’ll need access to a certain character class or have progressed far enough along in the story. For example, we met a guy called Biggs Darklighter who had a mission for us, but we could only activate it as a scoundrel class character, and whiney Luke didn’t exactly fit the bill. But, Han Solo on the other unarticulated hand…

Despite spending ten hours with the game, we’ve only begun to scratch the surface of this lovingly crafted world. On top of the many side missions still to complete, we only reached Episode IV, which was already adding more mechanics and options from the get-go. There is still an entire trilogy and a half to play through, more planets to explore, and a genuinely daunting amount of content to uncover. We’re desperate to keep exploring this galaxy far, far away. One that’s filled with favorite characters, fantastic environments, and exciting challenges.

Alone in the Dark returns
Story details you need to know before playing God of War Ragnarök
Activision teases Modern Warfare 2’s latest map in an unusual place
Blue hair and pronouns in I Was A Teenage Exocolonist, out August 25
Doom can now run on a jailbroken tractor