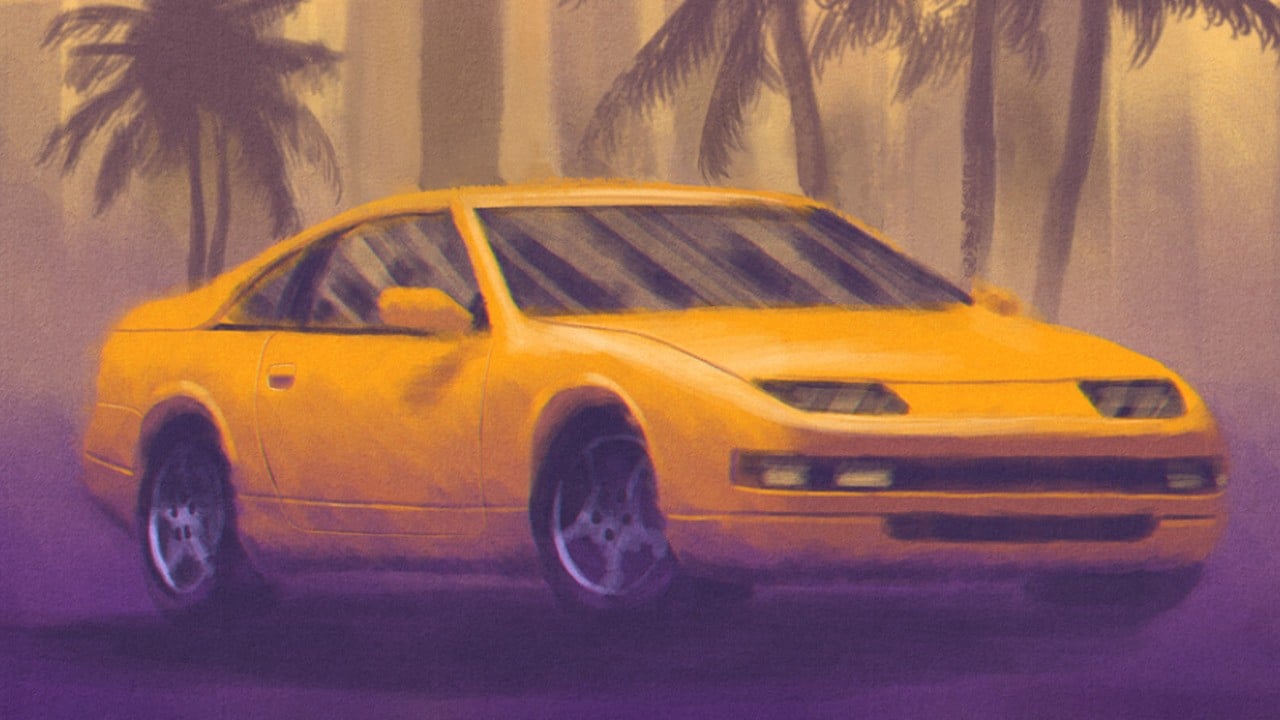 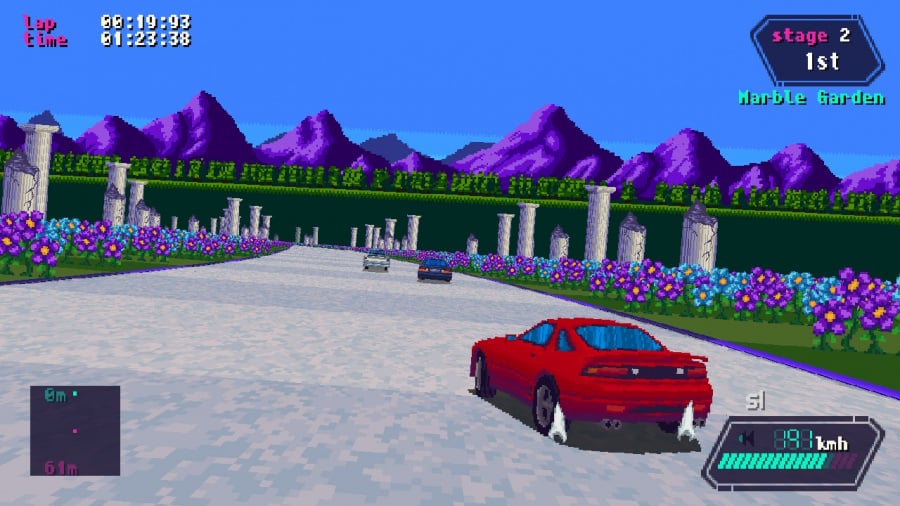 If it’s retro racing you’re looking for, you don’t have to look far on Switch. The likes of Hotshot Racing, Formula Retro Racing, Horizon Chase Turbo and the Sega Ages versions of Virtua Racing and Out Run have ensured that anyone keen on a racing game of the vintage vehicular variety is practically spoiled for choice.

Slipstream is the latest game to be added to this ever-growing list, and given that other games have attempted its ’80s-style look in the past (we’re looking at you, 80s Overdrive), its art style doesn’t feel particularly unique these days. It’s fortunate, then, that there’s still a pretty fun racing game underneath what has become a fairly overused aesthetic.

The game clearly takes inspiration from ’80s arcade racers like Out Run (as well as another Sega title, which we’ll get to), with high speed road racing and wild, comically long turns very much the order of the day. In an attempt to add some variety to proceedings, though, there are a handful of modes that each take the action in a different direction. 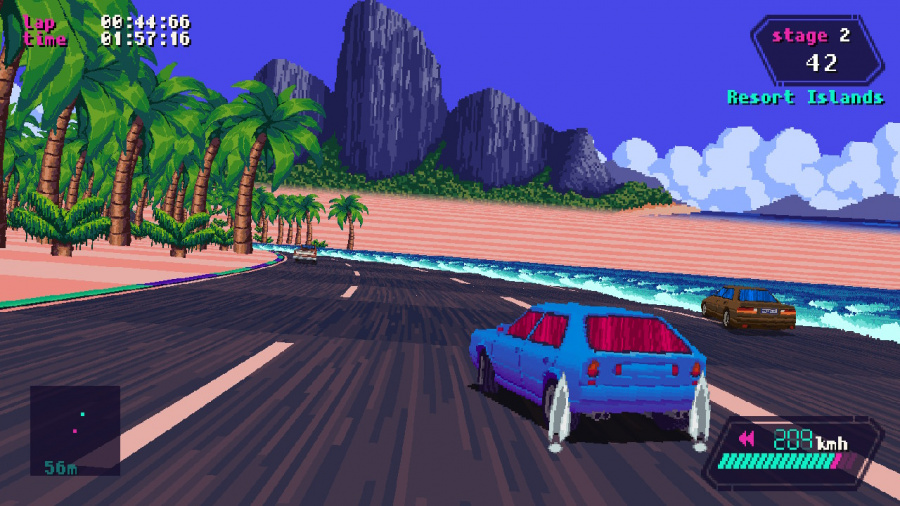 Grand Prix is your typical Mario Kart situation, where you’ve got three cups consisting of numerous races, with points awarded based on where you finish. Grand Tour, meanwhile, is more like Out Run, where you have to make your way through five connected stages within a time limit, with forks at the end of each stage determining where you end up next. Then there’s Cannonball, which is similar to Grand Tour but with more customisation, allowing you to create one long race with up to 30 stages, which you can choose manually from the 15 tracks available.

As previously mentioned, once you’re on the road itself Out Run is the key influence, but it’s an interesting hybrid because while its appearance is clearly based on the 1986 Sega original, the handling features a powerslide mechanic which feels a lot more like its polygonal sequel Out Run 2.

While it’s possible to get through most turns by simply turning and braking where needed, in order to efficiently get round each track you’re going to have to master powersliding. This is performed by briefly tapping the brake button then jamming the accelerator again, swinging out the back of the car. The powersliding in Slipstream takes a few races to get used to, because the timing is crucial: start too early or too late and you’ll be crashing into the trackside scenery (flipping over Out Run-style, naturally). Once you’ve nailed it, though, it can be immensely satisfying to swing round a particularly tight turn as the back of your car barely avoids brushing against the numerous obstacles at the side of the track. 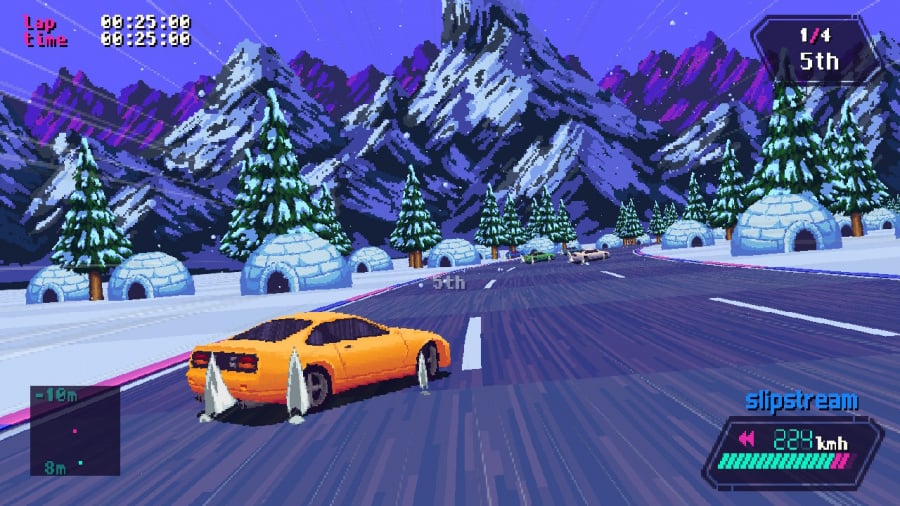 That said, the track design can make for some frustrating moments at first. Many of the tracks are designed in such a way that some turns lead straight into opposite turns with no warning, meaning if you don’t know they’re coming you almost certainly won’t be able to pull off a second powerslide in time and will crash.

This is remedied to an extent with the addition of a rewind button which lets you bring the action back a few seconds, allowing you to then anticipate the turn, but realistically this feels like papering over the cracks: you shouldn’t have to rely on a rewind system, even on tracks that are new to you. Of course, as you learn each stage you’ll eventually memorise which turns lead quickly into opposite turns, meaning this becomes less of an issue over time, but it can still prove annoying during the first few hours of gameplay.

Naturally, special mention does have to go to the game’s graphics, which are handled in a cleverly effective way by essentially attempting to replicate the pseudo-3D style of Sega‘s ‘Super Scaler’ racing games like Out Run and Super Hang-On. While the game is technically 3D and its tracks are polygonal, then, the cars and scenery all look like flat sprites. When you’re zooming through the tracks at high speed (especially when the titular slipstreams are activated) at a rock solid 60fps, the effect can be really impressive. We may personally be over the whole ’80s thing, but when it’s handled well it’s handled well. 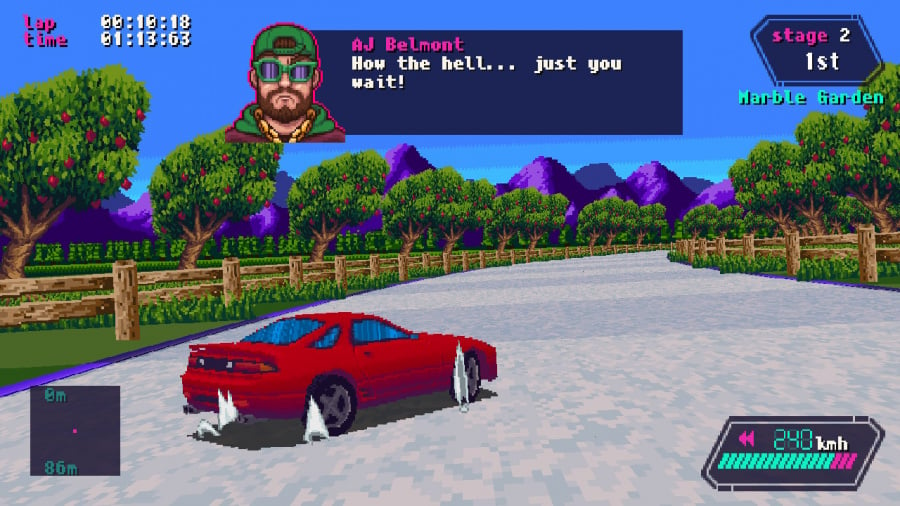 One thing that did strike us as particularly odd, however, is the way Slipstream makes numerous references to the Sonic the Hedgehog series for no apparent reason. Of the 15 tracks in the game, seven of them have the same name as Sonic or Sonic R stages (Chemical Plant, Ice Cap, Emerald Hills, Resort Island, etc), while winning a cup gives you a special celebration screen where your trophy is surrounded by what can only be described as Chaos Emeralds. Grand Prix races are called ‘Acts’ (and are introduced with a splash screen identical to those in 16-bit Sonic games), and the 3-2-1 countdown uses a design blatantly nicked from Sonic Mania.

We would understand this if Sonic was linked to the game in any sort of way, tenuous or otherwise, but the connection — beyond the speed — is just so random the whole thing feels oddly out of place. The odd nod here or there would be one thing but the references are so frequent that anyone well-versed in Sonic won’t necessarily appreciate them: they’re likely to be distracted by them and wonder why they’re there. There’s paying homage to something, and there’s just dumping references to it wholesale without rhyme or reason.

The music is also something of a mixed bag. It’s your typical helping of ’80s-style synth retro soundtrack but none of it really clicked with us in a way that had us turning up our headphone volume. It’s a ‘safe’ collection of tracks that matches the aesthetic without necessarily going above and beyond to create any truly memorable bangers. It’s one of those situations where if there was no music, its absence would be noticeable but its presence isn’t remarkable in any way. 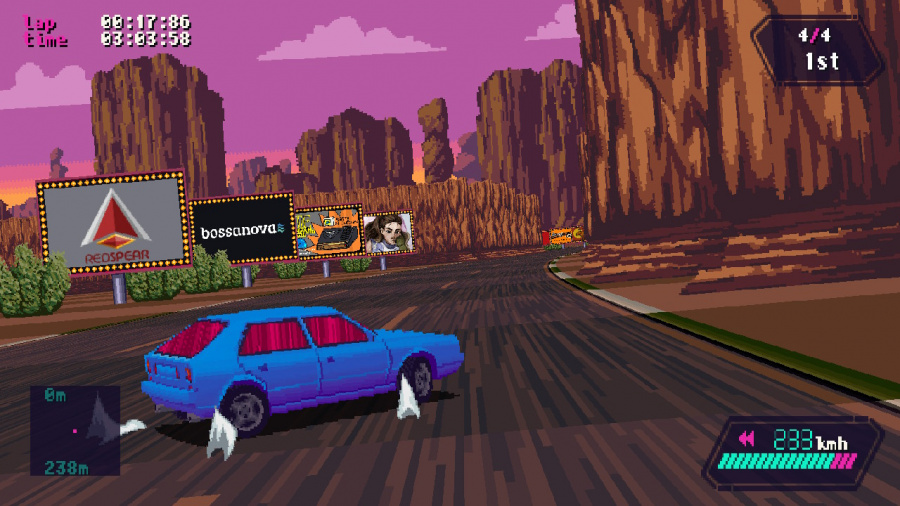 Despite the negativity in this review, the one main thing that should to be taken from it is that, at its core, there’s some solid racing action to be had here once you get used to the handling and the corners coming out of nowhere. Given its reasonable price point, too, it’s a perfectly acceptable racer if you’re looking for something different that’ll keep you busy for a few hours.

There’s also local split screen multiplayer for 2-4 players, which includes almost all of the single-player modes (the only exception is Grand Tour because of its multiple routes). Everything still runs nice and smoothly in split-screen, so it’s yet another fine option for those seeking some local multiplayer racing goodness.

We may feel that the ’80s style has been overused and that Slipstream doesn’t push it forward in any remarkable way, but aesthetics and music are obviously down to personal taste so your mileage may vary (so to speak). Ultimately, there’s enough to do here to justify the relatively low price the game is selling for, so you certainly won’t feel short-changed if you buy it.