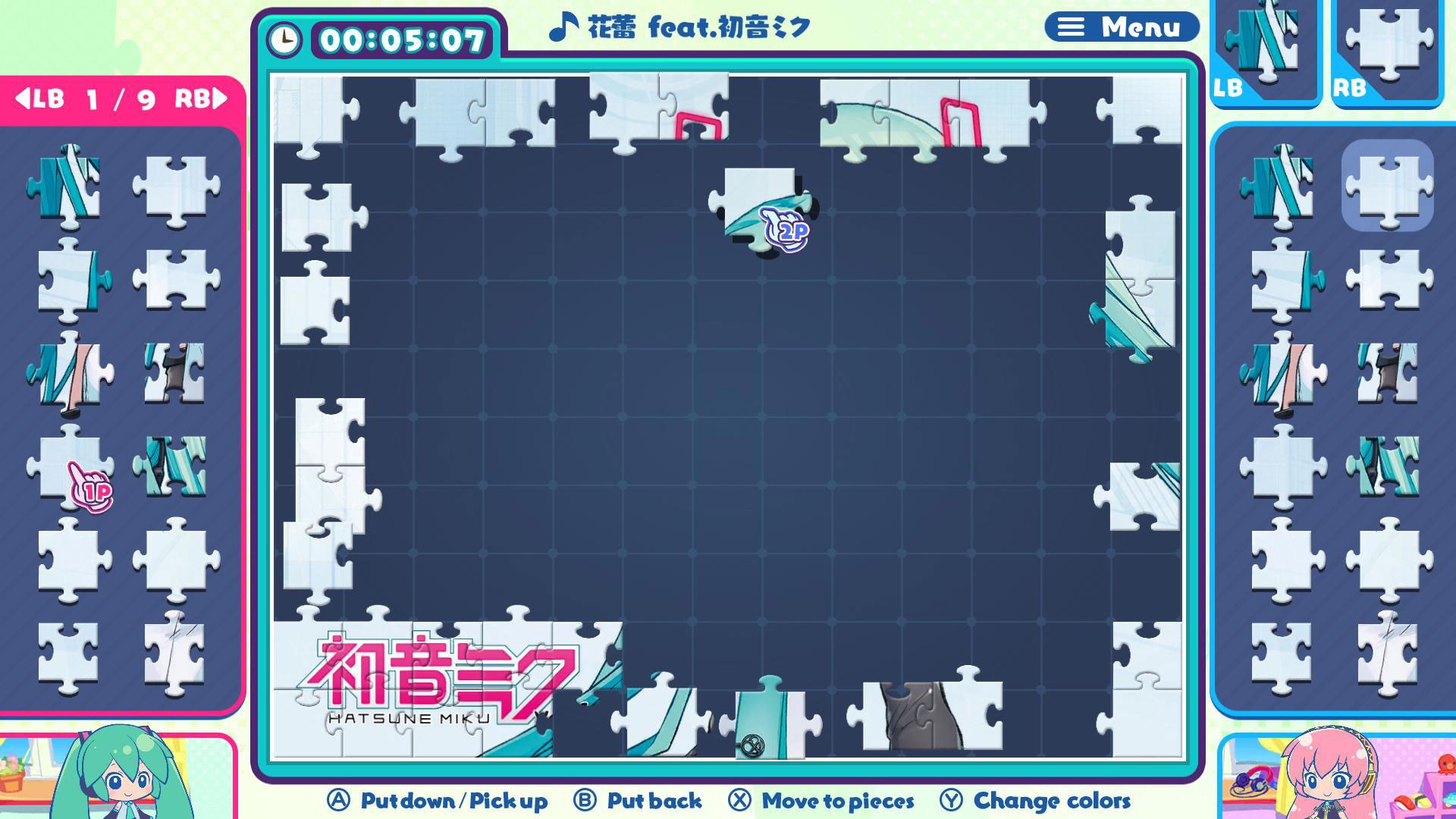 On these shores, the vocaloid Hatsune Miku is possibly best known for her rhythm action games, which makes it all the stranger that the Xbox is still waiting for its first one. Instead, we’ve been getting the side-gigs, with Miku popping up in Hatsune Miku Logic Paint S and now this, Hatsune Miku Jigsaw Puzzle, a reasonably straightforward jigsaw puzzle game. Perhaps it’s testing the waters.

In terms of Logic Paint S, we weren’t that bothered about not getting a mainline entry. It was a picross or nonogram collection, and somehow managed to be one of the best examples that we’ve played on any system. It went for sheer volume of puzzles, and when faced with a fork in the road, one path leading to difficulty and knottiness, the other leading to the smoothest and easiest Picross experience, it chose the latter. It offered every possible tool or help to the player, and ended up a much better experience for it. We handed it a ⅘ in review, and proceeded to 100% it – a sure sign that it was onto something.

Now, Crypton Future Media have turned their attention to the humble jigsaw puzzle. Up to this point, we were of the opinion that a jigsaw puzzle is an impossible task for a video game. All of the interactions that we take for granted when completing an actual jigsaw puzzle – the sorting into colours, getting all the side pieces on the board first, and gently wiggling two conjoined pieces to ensure that, yes, they were meant to be next to each other – are so much more fiddly and unenjoyable when you have a pad in your hands. And it’s not as if jigsaw puzzles are hard to set up in your front room.

So, it’s fair to say that, while we had confidence in Crypton Future Media, having nailed Picross with a gamepad in your hands – not an insignificant feat – we were less sure about them succeeding at doing the same with jigsaws.

At least, if Hatsune Miku Jigsaw Puzzle was going to fail, it was going to sound good doing it. As you would expect from a Hatsune Miku game, the soundtrack is a gaudy J-pop masterpiece. It swerves to take in some house and techno, but generally this is saccharine sweet and a delight to listen to throughout. If you like popping on some Wagner as you do a jigsaw at home, it might be a little much, but it improves everything it touches here.

The same goes for the presentation, which is as chibi and in-your-face as it was with Logic Paint S. Everything is fun to interact with, resulting in booming sound effects whenever you select anything. It’s everything we expect a Japanese arcade to feel like.

There are thirty-nine puzzles here, which proves to be simultaneously enough and too little. We say too little because there’s a voice in the back of our head, complaining that the jigsaws are just wallpapers that Crypton had sitting in their hard drives, and for £9.99 they should be able to rustle up a few more than that. We say ‘enough’, because, in reality, we were done well, well before we reached the end of those thirty-nine. Perhaps it was enough after all.

Each puzzle has an Easy (63 pieces), Normal (130 pieces) and Hard (300 pieces) version, so let’s be charitable and say there are 117 puzzles here rather than thirty-nine. The achievements certainly want you to do every single one. Surprisingly, there are no modes beyond simple puzzle-completion. We’re racking our brains to think what those alternate modes might have been, but it’s surprising to discover just how vanilla Hatsune Miki Jigsaw Puzzle is. There’s a co-op mode, if you like to fight over the pieces on a single screen, but otherwise this doesn’t attempt anything surprising.

And then it’s into the puzzles themselves, and ‘we told you so’ rings in our ears. When interacting with up to 300 pieces on a wide range of screen sizes, a jigsaw puzzle ported to a video game was always going to be a challenge. How do you find the piece you want? How do you clip it satisfyingly to another? How do you emulate the fantastic sound of rustling for jigsaw pieces?

Hatsune Miku Jigsaw Puzzle can’t find the answers. It does try, and there are some welcome concessions. For example, every piece is presented in an orderly fashion on the left-hand side of the screen, and they are all rotated the right way round. There’s an argument that this makes it too easy for a seasoned puzzler, but you’ll be thankful for it by the end.

Speedhump #1 is that there are a surprising number of interactions when you’re doing a jigsaw. Pick up; drop; sort into a pile; clip into place; chuck back in the box. You don’t realise it until you play. Hatsune Miku Jigsaw Puzzle attempts to solve this problem by mapping an awful lot of buttons onto the controller, and changing what they do dependent on context. So, LB and RB will snap to the next puzzle piece when you’re in the puzzle itself, but when you’re in the box menu, it will tab along to the next ‘page’ of pieces.

This would work fine if the two ‘modes’ were distinct, but they often overlap. We’d want to look at the next lot of pieces while working on the puzzle itself, yet accidentally swap the piece we were holding. It’s just as easy to drop a piece when you meant to chuck it back into the box. We were constantly tripping over ourselves and cursing, and the controller began to feel like an obstruction to puzzling, rather than an aid.

It scores some own goals, too, leading us to speedhump #2. The pictures themselves might have made for good wallpapers, but many of them – particularly the opening ten or so – make for flipping awful jigsaws. There’s a huge amount of open, blank space where desktop icons would go on a wallpaper, but they are a single-colour wash that makes constructing it in jigsaw pieces a nightmare. This is no more true than on Hard mode, where 300 pieces, all looking identical, and without the tactility of picking them up to check their connection, it becomes an absolute ruddy chore. There’s a simple art to picking pictures for jigsaw puzzles, and Crypton Future Media keep getting it wrong.

Swallow your pride, though, and play Hatsune Miku Jigsaw Puzzle on Easy and there’s some enjoyment to be had here. Even the worst pictures get their rough edges filed off, and you almost achieve a kind of flow. It’s still impossible to sort pieces in a satisfying manner, piling up and rummaging through pieces of the same colour, but the ease of the puzzle makes it kind of moot. It’s not challenging in any real way, but you can still achieve the meditative state that a lot of jigsaw puzzlers aim for, where you lose yourself in the flow and let your brain creep out of your ears.

Whether that’s enough is a good question. Hatsune Miku Jigsaw Puzzle can handle smaller puzzles, where the inherent clumsiness of fiddling with pieces using a controller is minimised. But if you’re more ambitious and want slightly more than sixty-three pieces to play with – and we suspect that most jigsaw enthusiasts will want at least that – then it stumbles. The pictures don’t suit the format, the controls are awkward, and it’s lacking the joy of pieces snapping together. Save yourself the stress of Hatsune Miku Jigsaw Puzzle and pop into your local charity shop for a Ravensburger.

You can buy Hatsune Miku Jigsaw Puzzle from the Xbox Store