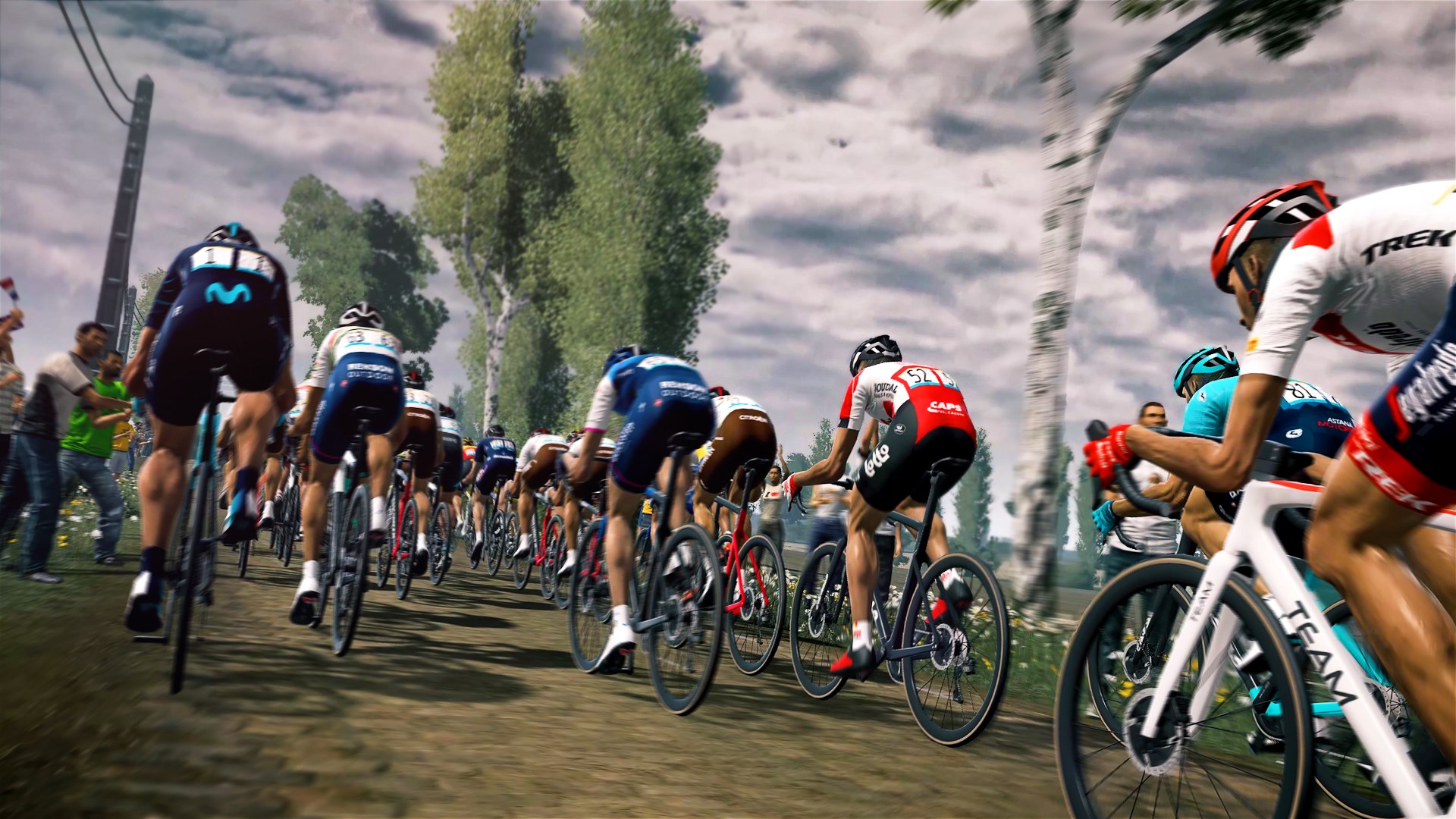 We’re super keen cyclists. We’ve got the bikes, the lycra, the energy gels and the Strava account. We’re even slowly continuing to roll up to Level 50 on Zwift, and whilst we may not have maxed out yet, we have ridden the Alpe in under an hour, so get us.

We like to think we know a bit about cycling, as well as video games. And that puts us in as good a place as any to measure up the latest cycling games that are on the market. So here we are, pitting Tour de France 2022 up against Pro Cycling Manager 2022. Which is the best cycling game?

Tour de France 2022 is Cyanide Studios and Nacon’s attempt at taking the finest bike race of them all, the grandest of Grand Tours, to the virtual world. Having delivered an annual option for a decade, it’s the Tour de France game that is your best bet should you be looking to jump aboard a bike and throw yourself down the nearest mountain. Of course, you’ll need to climb it first.

Tour de France 2022 covers the same route that the pro peloton will be covering across the twenty-one days over which the Tour de France 2022 is taking place. A Career mode will allow you the chance to start off in Denmark, to flirt with Belgium, to hit some cobbles and to traverse the lands of France on the finest two wheels.

But it adds more and a number of other multiple day races are in place, alongside some of the best Classics – Paris–Roubaix and Liège–Bastogne–Liège are two highlights but there are plenty more.

Further to that is a new Race of the Moment mode which puts you in some time limited competition every so often, given the opportunity to showcase your bike handling skills to the rest of the globe.

There’s more and in the form of Pro Team and Pro Leader, you’ll be able to delve into the finer details of a bike race, as you attempt to either take your rider from the bottom to the top, or do similar with a full team.

As a cycling game goes, Tour de France 2022 has a lot of content, but as our full review states, it rarely knows how to use it. Poor visuals and the same old presence as in years gone by see it get dropped at the first sign of any incline.

And then we have Pro Cycling Manager 2022 – a game which is restricted to the PC landscape, probably for good reason too. It’s a game that comes out of the exact same studio and publishing team as Tour de France, but goes for an even more in-depth, tactical take on bike racing. Or at least it should be, because in reality it feels completely soulless.

As primarily console players who only really dabble in the land of PC, Pro Cycling Manager 2022 is about as ‘PC’ orientated as you’re going to get. Expect menus, a few more menus and then throw some more menus on top. In fact, once you think you’re done with menus, further ones come up and smack you around the face. If you like that kind of thing, good on you, fill your boots. For us, there’s far too much detail and not enough of the proper action to allow us the chance to really get on board.

Look away from those though and Pro Cycling Manager 2022 covers both single player and multiplayer bases. Let’s put it out there now and say it’s a real struggle to find any form of match-up in the multiplayer scene – a serious lack of players is the cause.

Single player is better, obviously, and this will have you working your directeur sportif skills through a range of race options. There’s the Career which lets you work over several seasons in hope of taking the team you control to the upper echelons of the sport, whilst Pro Cyclists prefers to focus on just the one rider, going from neo-pro to a Grand Tour winner.

There is also the chance to partake in one-off races too, shortening the amount of time you need to pore over those stats.

And stat poring is what Pro Cycling Manager 2022 is mostly concerned with. In fact, this is as deep as you could imagine, and whilst not as database filled as you’d find in Football Manager 2022, as a cycling nerd, it’ll more than cover the bases. You’ll find near on every detail you need in regards the riders in the pro peloton and beyond, amends to wheels that are used and the like. It’s all very in-depth, but ultimately just for show as Pro Cycling Manager 2022 fails to ever ignite the fire in the legs.

It also comes with a Track mode, moving away from the open world of bike racing and taking things to the velodrome. It’s here where you’ll be able to compete in the likes of the Keirin, Omnium, sprint races and more. It’s probably the best of the modes that are on offer if you ask us.

So, back to the question, Tour de France 2022 vs Pro Cycling Manager 2022 – which is the best cycling game and which should you buy? Well, there’s no doubt that for stat fans, it’s Pro Cycling Manager which wins the day. It’s super deep in terms of numbers and gives you the chance to run a pro team as you see fit. But honestly, it feels like the fun has not just been removed, but banned from ever returning. Oh, and you can only play it on PC – there are no console ports of Pro Cycling Manager.

It’s here where Tour de France 2022 comes in. Whilst we still hate the fact that Nacon and Cyanide are reusing old assets that have been sat in their media library for years, and whilst nothing really ever changes from year to year, as a road cycling game and one that focuses on the Tour de France, it’s the best option out there.

Unfortunately though, that’s not saying much and should you be able to push yourself away from the world of the roadie, we think you should be going all out with Lonely Mountains: Downhill instead. It may require you to wear some baggies and consider yourself to be totally rad, but it’s a brilliant game that delivers the fun and thrills that a downhill mountain biker would want.

As a road rider, that’s a tough statement to make.

If you want to pick up Tour de France 2022 you’ll find the game on Xbox One and Xbox Series X|S from the Xbox Store. It’s also on PS4 and PS5. Pro Cycling Manager is on PC – Steam will sort you out.

Huge thanks go to Nacon for providing us access to both Tour de France 2022 on Xbox Series X|S and Pro Cycling Manager 2022 on PC.