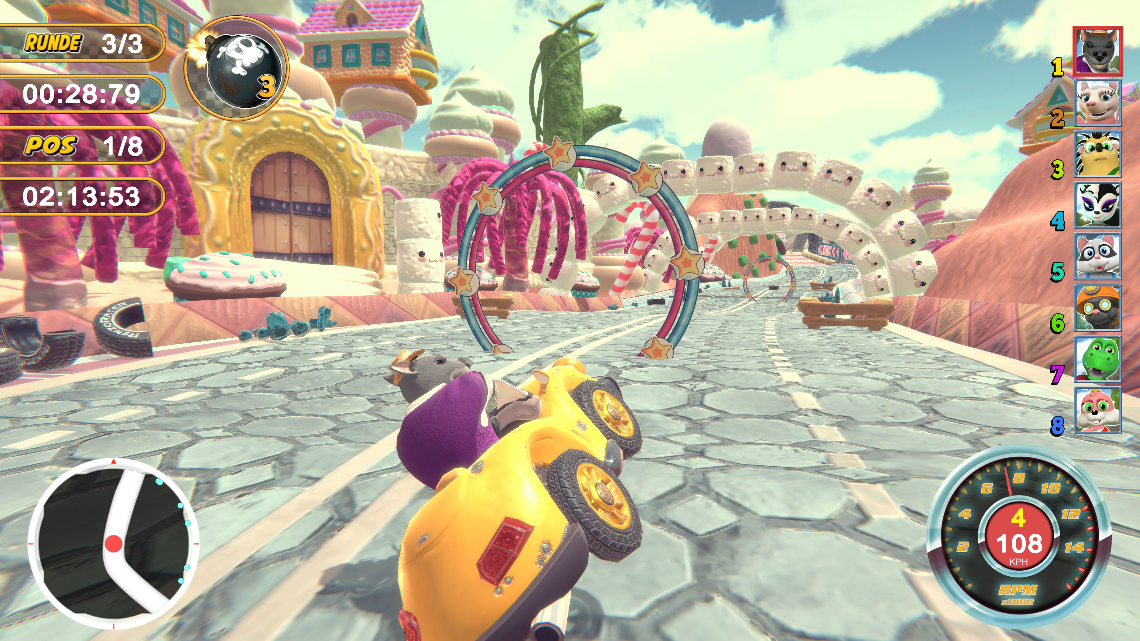 Fleck the course with blood and weld some blades to the cars’ wheels, and you could have told Renzo Racer it could have been a Five Nights at Freddy’s karting game. There’s something truly terrifying about its animatronic characters, staring at us, dead-eyed, from the Xbox Store.

It would have given Renzo Racer a reason for existing, which – we are sad to say – it otherwise doesn’t have. Renzo Racer enters the busy karting space, where you need something truly remarkable to stand out from the Mario Karts and Sonic & Sega All-Stars Racings of this world. But a dog has eaten its homework. It can’t come up with a single noteworthy element, and for £19.99 – not an insignificant sum – that’s a fatal omission.

We can forgive the lack of a licence, though. It’s oddly refreshing to be playing a karting game where we don’t need knowledge of every Nickelodeon show that ever existed, or have cursory experience of the latest Youtubers. But we could have done with a touch more imagination than is currently shown in the characters. Almost apologetically, the artists have served up some generic animals – a racoon, an owl, a squirrel – and then slinked out of the room without adding things like character or interest. What? You asked for a rabbit mate. Deal with it.

What surprised us most was the lack of ways that we can play Renzo Racer. There are Cups, with the races laid out in fours to make Grand Prix-style events, and there’s a Quick Race which is utterly bemusing, as it gets even the simplest things wrong. Even if you’ve got first-place in every single Cup, the tracks won’t be unlocked in Quick Race. You have to play every race again in this format. And for reasons we can’t figure, each race is two laps in the Cups, but three in Quick Race, and you can’t increase or decrease that number.

These are the only two ways to play Renzo Racer, and neither of them have much that resemble options. You can nudge the difficulty down to ‘Easy’ (not advised, as the races are benign even on Normal), but you can’t fiddle with the laps, the weapons or anything else. We should be appreciative, we suppose, that four-player local co-op is available out of the box. It’s all we’re going to get. There’s certainly no battle modes, time trials, mirrored tracks or anything like that.

The races themselves are not all that bad, we suppose. They occasionally threaten to offer some verticality, with one particularly good course taking us down a water flume. But, more importantly, there’s a bit of variety to them. They can’t quite achieve the memorable moments that you get from a Mario Kart, but the backgrounds are rarely reused, and they’ve got bold, understandable themes like a cheeseboard, a land made of sweets, and a haunted mansion.

You’ve seen them all before in other karting games, of course. In a brazen example of pilferage, there’s even a Rainbow Road, just with barriers around the outside to completely miss the point. Oddly, some Digletts from Pokemon seem to be floating around on clouds to put you off. It’s twenty checkbox-ticking courses, all nabbed from other, more famous games. Perhaps there’s a little bit of fun in spotting the references.

It’s in the driving that Renzo Racer truly sinks and stinks, though. Lacking any powerslide, or anything that resembles one, the skill ceiling is low in Renzo Racer. It leaves it with quite the problem: how to generate difficulty from the tracks, and how to let the player show their skill? It doesn’t have particularly good answers for either of them.

Renzo Racer is aggressively easy, even on the hardest ‘normal’ difficulty. But it’s not easy in any satisfying way. Firstly, CPU players are extremely erratic, effectively stopping in some instances when you crash, or zooming away at inhuman speeds at other points. It’s hard to tell which mode they’re going to be in, and it seems to change depending on the track. Rubber-banding is also an issue, as getting out in front means you’re pretty much unassailable: there aren’t any weapons to crowbar you out of that position.

The weapons are a sorry lot. There are a grand total of three in Renzo Racer, and they’re all the least fun examples from other games. There’s a bomb (effectively a mine); a speed boost; and the crappest of them all, the missile. What makes this missile so spectacularly abysmal is that it doesn’t hover off the floor like you might expect. Instead it fires directly forwards from your car. What this means is that, if you’re on a track that is winding upwards, the missile will explode against the tarmac. If you’re on one that’s winding downwards, then the missile will spin off into the distance. Lord knows who thought that might have worked.

Everything is so slow, too. You travel at roughly the speed of a pushchair accidentally left on an incline. Don’t dare get hit, as you will spend a solid ten seconds getting back to a competitive speed.

But what makes Renzo Racer so uniquely excruciating is its approach to obstacles. Rather than toss down some enemies or traffic to avoid, Renzo Racer is a fan of destructible objects. Crash into a pile of tyres or some stalagmites, and suddenly the track is awash with detritus. By lap two, it’s a mess, with stuff everywhere. But hit any of these tiny, not-much-bigger-than-a-pixel items, and your car will jacknife into central reservations or do a 360 into the air.

Races effectively become random. It’s impossible to dodge all of the stuff on the floor, so you’re crossing your fingers and hoping that there isn’t a bit of flotsam or jetsam that will send you backflipping. Even worse, some of them will tip you onto two wheels, yet you have no means of getting back onto four wheels. All you can do is slowly travel forwards in the hope that you will hit something. If there was a respawn button, things might have been redeemable, but – too often – you’re left upside down or stuck behind rocks, waiting for the game to realise that you’re totalled and need an RAC pickup.

Ye gods, it’s horrible You could argue that the CPU racers effectively wait for you to return to the track – they’re that generous and slow. But where’s the joy in that? We can’t hold up our first place trophy with pride when everyone else has pulled up for a kip while we got our act together.

We struggle to come up with many reasons to pick up Renzo Racer. While it controls reasonably well, it’s the bare bones of a karting game, stripped of charm and sprinkled with infuriations. Then someone slaps a £19.99 price tag on it. Now, if it was a Five Nights at Freddy’s karting game, and it layered on the bloodletting, well, that might have been a different matter.

You can buy Renzo Racer from the Xbox Store

Google is embedding cloud gaming right into its search results
Rollerdrome Trophy List Will Take Skill, Practice, and Perhaps a Bit of Luck
Stay Alive if You Can, with the ID@Xbox Survival Sale
Outward: Definitive Edition Review
How To Fix PS Remote Play ‘Something Went Wrong’ Error