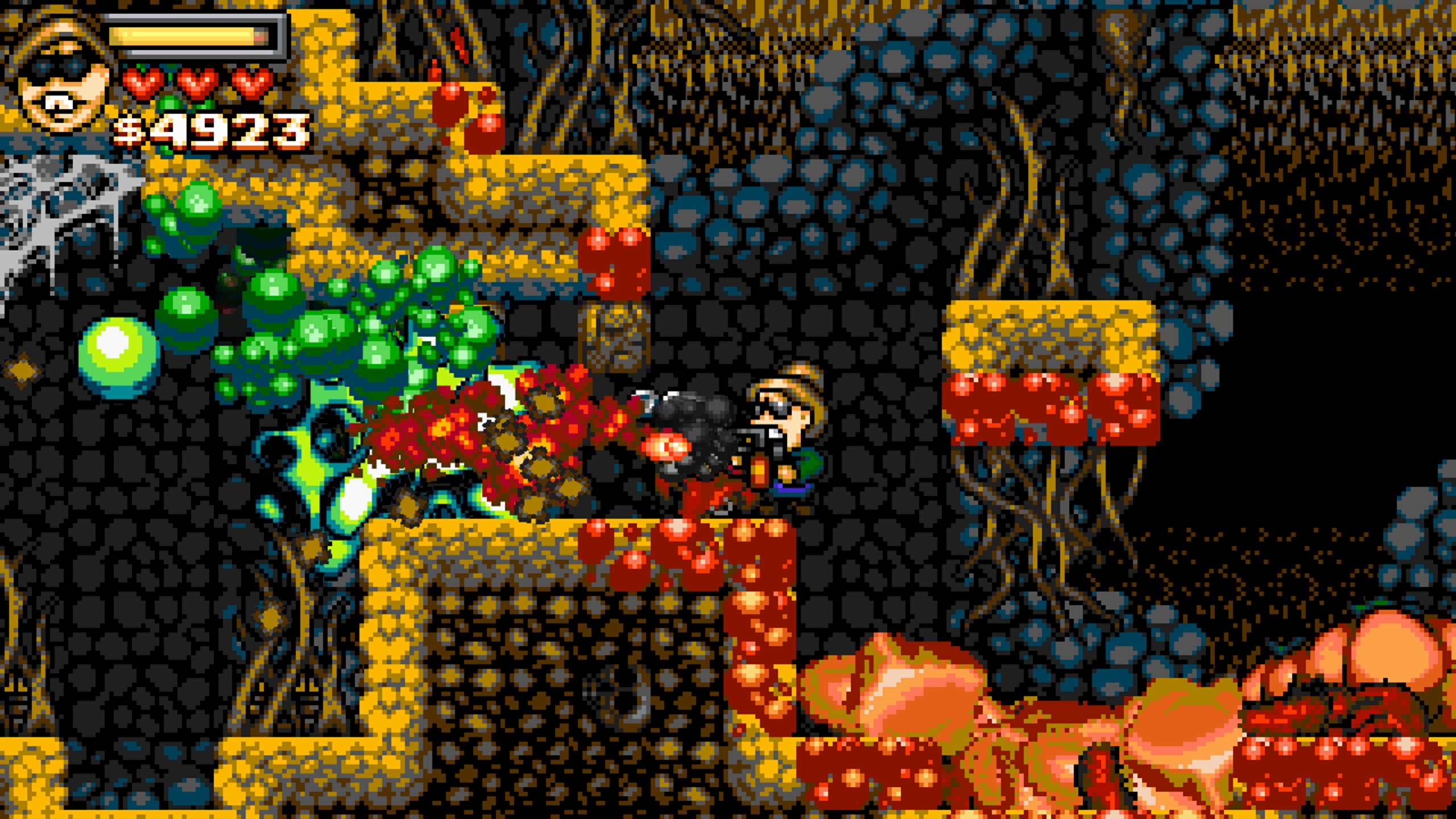 Hillbilly Doomsday, you let us down. We were hoping for an invasion of hillbillies: hordes of pitchforks, blunderbusses and old men strapped to rocking chairs (our experience of hillbillies is limited to Deliverance and, um, the Beverly Hillbillies). Instead, we get to play as a hillbilly, against – yawn – a zombie apocalypse. It’s just not the same.

In Hillbilly Doomsday, you get to play as Uncle Billy (doubling up on the ‘billy’ of the title) from the remote town of Rottenwill, and you are Earth’s last remaining hope. An alliance of zombies and aliens has swept aside all humanity, and now it’s down to you, your axe and your revolver. Cutting through the hordes, the hope is that you can reach the source of the invasion and make it explode.

Outside of playing a hillbilly (Wikipedia tells us this is a slightly frowned upon term nowadays, so there you go), Hillbilly Doomsday isn’t going to rewrite any game design courses. It’s an extremely traditional action-platformer, less complicated than your average Megaman, Metal Slug or Contra. You can probably close your eyes and imagine what it has to offer: pixel art, extremely linear 2D levels, and zombies running full-pelt as you puzzle out whether to switch to your axe for some hack-n-slashery, or stick with the gun to plink them at long range.

There’s an uncomplicated joy in playing Hillbilly Doomsday. Almost all of its enemies die after a couple of hits, and they tend to do so in a shower of giblets. You can feel like a combine harvester as you churn through the levels, viscera pouring out of the sides. That feeling only increases once you stockpile some coins and purchase unlocks like the minigun and flamethrower. There’s no shame in enjoying just how powerful you are, and how the enemies get munched through like popcorn.

It all works, too, with only very minor exceptions. You have a blindspot, which is exactly where you’re standing. If an enemy comes in for too close a cuddle, it can be very difficult to rid yourself of them. With an immunity period that’s only a second or two long, it’s easy to get hit multiple times by them. But, generally, the combat is satisfying and brainless. So many games get this important element wrong, but Hillbilly Doomsday largely nails it.

That is, until Hillbilly Doomsday decides that it is also a platformer. The jump’s not responsive enough, and you can be wondering why Uncle Billy has swan-dived off a platform rather than leapt like he should have. Slippery goo starts appearing on platforms from level two, and the problem is multiplied. But the worst of all is in the latter levels, when Hillbilly Doomsday decides you’re capable enough to traverse vertical levels that require well-timed leaps with little ledges to bonk your head on. The controls are nowhere near refined enough to make these vertical levels satisfying.

There are six worlds, each with seven or eight levels to complete in a row. You will be traveling through swamps, skyscrapers, caves and – in the game’s finest moment – the interior of a giant beast. It won’t take you long, though – there’s a maximum of three hours of play here. The £4.19 price tag should soften the blow.

Bizarrely, the levels give up by the end of level four. Levels five and six are straight sprints to the exit, with even less interest than the preceding four levels. The ‘belly of the beast’ level, for example, has you sabotaging a creature from the inside, destroying brains, eyes and teeth in an effort to get ejected. That’s cracking, and we rubbed our hands with glee, expecting subsequent levels to be just as inventive. Instead, the monster level wiped the design team out. They effectively gave up and churned out identikit levels with double the number of enemies, as a half-hearted attempt to offer some challenge.

After each level, you’re given a choice of unlocks, from guns to armour to magnets that attract the game’s currency. Dying steals currency from you, so a clean run through the level is rewarded with the possibility of buying two unlocks, rather than just one. We bought the minigun as soon as we could, and got duly rewarded with a weapon that made us almost unkillable. Hillbilly Doomsday wants you to feel like a superhero in dungarees, but it can’t find a way to make the game difficult or interesting when you do. There’s a core problem with Hillbilly Doomsday, that you ultimately overpower anything they can throw at you.

The bosses should have been an opportunity to even the scales, but they were either cheesable – two of them we killed without being hit once, by standing in a location they couldn’t reach – or quickly becoming toast with our minigun. They’re certainly a level up from the average zombie horde (one of them actually is a zombie horde, which is cheating), but they could have afforded to go several levels up. We never felt like Hillbilly Doomsday was really testing us.

We’d be lying if we said we didn’t enjoy Hillbilly Doomsday. It’s like someone handed us Megaman but with cheats enabled, and we merrily chewed through the levels with blood spattered across our face. But while there’s a place and a time for that, we found our attention wandering from the repetitive enemies, the basic levels and the cheesable bosses. Perhaps appropriate for a game dedicated to zombies, we were hungry for something with a little more brains.

You can buy Hillbilly Doomsday from the Xbox Store