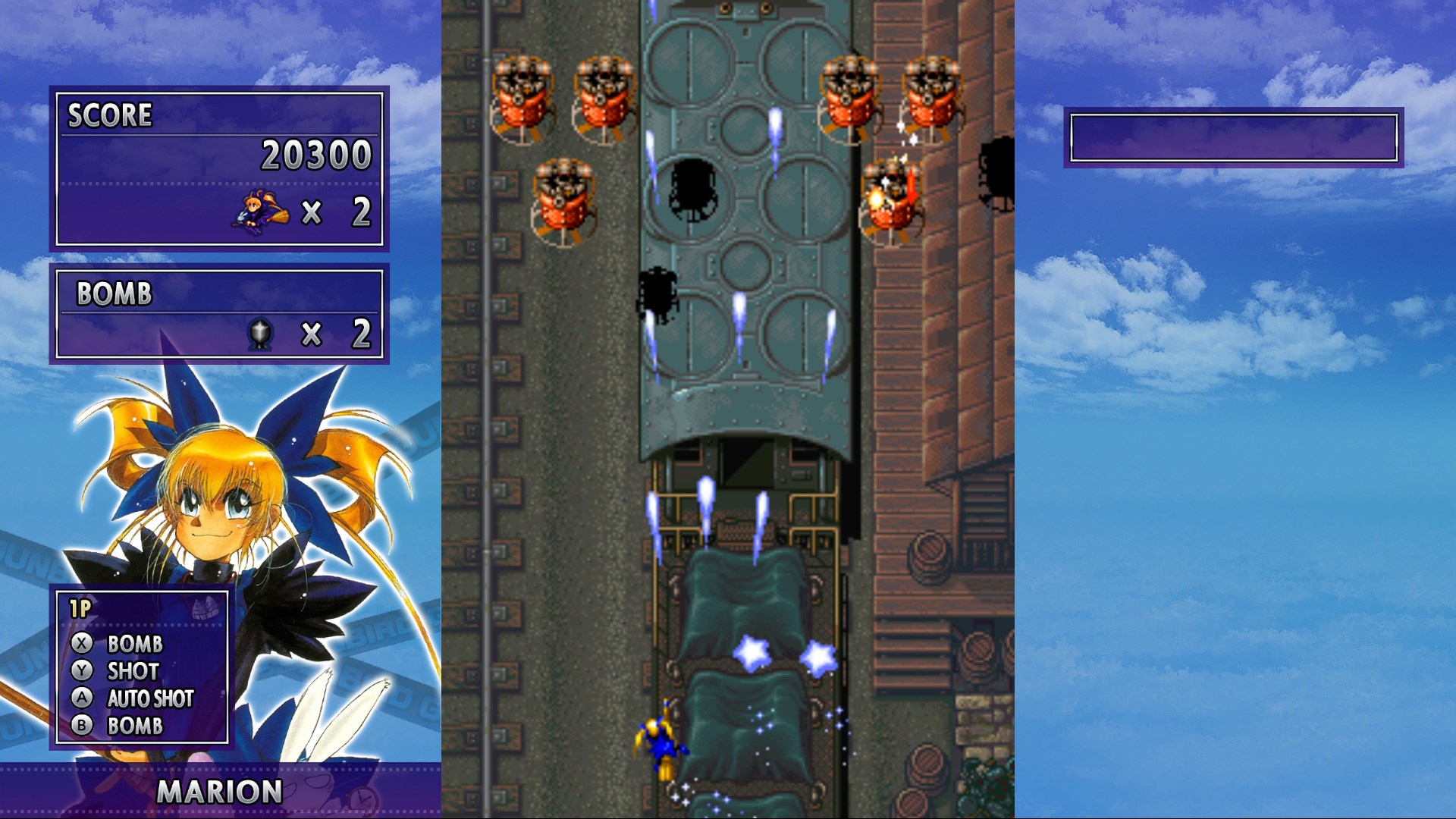 Now, this is more like it. We’ve taken it upon ourselves to work through all of the Psikyo shoot-’em up classics that have been recycling onto the Xbox Store, and that odyssey has – so far – taken us through all the Strikers 1945 games. In the future, it will bring us to Samurai Aces and others, but, for now, we’ve only encountered the Strikers games, and – while good, hearty experiences – they lack something in the imagination and variety department. They’re all remixes of the same song, even if that song slaps.

Following on from the WWII-loving Strikers series, we decided to pull GUNBIRD off the shelf, and we’re entirely glad we did. It’s a palette-cleanser, getting everything right that the Strikers games got wrong, and we couldn’t be more glad that it was our next choice. We’re going to bet that none of the other Psikyo series beats GUNBIRD. Come back in the future to find out if we were right.

GUNBIRD doesn’t stray from the Psikyo template. You boot it up and choose your difficulty (nine settings available, with more opportunities to fiddle with lives and continues in the menus), before picking your ‘ship’. Then it’s straight into the first of eight vertically scrolling levels, each meandering through some simple-to-kill popcorn mobs, before unleashing an unholy mechanised monstrosity in the form of the game’s many bosses. Defeat these and, more often than not, a smaller but more devious boss will erupt from the dead boss’s carcass.

To aid you in your efforts, power-ups fall from the top of the screen; stack enough of these on your character without dying and you will become an overblown mega-fighter that puts Tom Cruise’s efforts in Top Gun to shame. Smart bombs fall too, and you can use these to wipe any missiles that are coming your way, as well as deliver a knockout blow to the majority of enemies on your screen.

It is the same blueprint that – so far – every one of these Psikyo titles has adhered to. And they adhere to it because it works: it’s a format that demands replay, as a runthrough is nothing more than thirty minutes, which means there is always a temptation to up the difficulty, choose a different fighter, and attempt to topple that highscore from its perch.

GUNBIRD is so good because it knows that the relationship you have with it is fleeting, so it makes proceedings as bombastic and silly as it possibly can. If you’re going to speed-date its levels, at least ensure they’re memorable.

This starts directly from the character select screen. Rather than picking anonymous fighter planes from history, you are picking some fantastical heroes that wouldn’t be out of place in a Darkstalkers beat ’em-up. There’s franchise-favourite Marion, a witch on a broomstick with a homicidal rabbit; rocketeer Ash, who is the epitome of everything steampunk; and Valnus, who is channeling the spirit of Tick-Tock from Return to Oz. Each are characterful and carry that character onto the screen, as Valnus employs lasers, and Marion delivers spell-like channelled abilities.

They’re not even the best characters in the game. That prize goes to a bizarrely named group called ‘The Trump’ who follow you, not unlike Team Rocket, in an attempt to thwart your plans. As you piece together fragments of a magic mirror and raise a genie that will save the world, they run, Benny Hill-like, through the levels, desperate to keep up with you, before hopping into uber-mechs and then barraging you with artillery. The Boss and the other Trumpians are great fun, and seeing them emerge from a destroyed robot with sooty faces and frazzled hair always gave us a chuckle.

We kept moaning at Strikers 1945 I, Strikers 1945 II and Strikers 1945 III in our reviews for the lack of differentiation in their industrial levels, but GUNBIRD has a fantasy theme to keep things interesting. Forests, temples, castles and interdimensional planes are all encountered, and it’s a breath of fresh air. Sure, there are still tanks and airships, but the bosses in particular showcase a more playful approach to enemies. One boss even looks like Big the Cat from the Sonic franchise, and it was entirely cathartic to shoot him down.

And then there are the endings, which we’re still taking time to process. You can choose to make a choice of two wishes with each character, and that wish can be self-centred or selfless. What follows is a bizarre consequence of your wish, and – as anyone who’s watched Bedazzled knows – you should be careful what you wish for. These amusing little post-scripts only push you to play again, to find out what happens when you choose the other path.

Does GUNBIRD have faults? Sure – but they’re mostly faults with the Psikyo template. Playing GUNBIRD a third or fourth time isn’t as varied or different as you might have hoped. While the characters are undoubtedly different, there aren’t wild variances to how they play or should be played. More disappointingly, the levels don’t change up much. There’s nine levels in total, so the eight that are picked to form your campaign aren’t altogether different. With some secret routes and bosses, GUNBIRD would have been a joy to replay.

And excuse us for being a stuck record, but the manner in which these games are being released is far from ideal. £7.49 for a twenty-five-year old game is steep, and new custodians City Connection are not bringing a huge amount to the table. There are some nice visual and difficulty settings to twiddle, but there’s nothing in the way of museum pieces or concept art that would make this act of preservation more satisfying. In a world that has Capcom Arcade 2nd Stadium, we would have loved a similar approach to the Psikyo re-releases.

Assuming that the steep price and lack of extras or variety doesn’t phase you, GUNBIRD is a rollicking beauty. It’s peak shoot ’em uppery, and does what few in the genre do: it manages to mix slick controls with oodles of character. If you’re going to invest in one of the many Psikyo titles that are launching each week onto the Xbox Store, make it GUNBIRD.

You can buy GUNBIRD from the Xbox Store