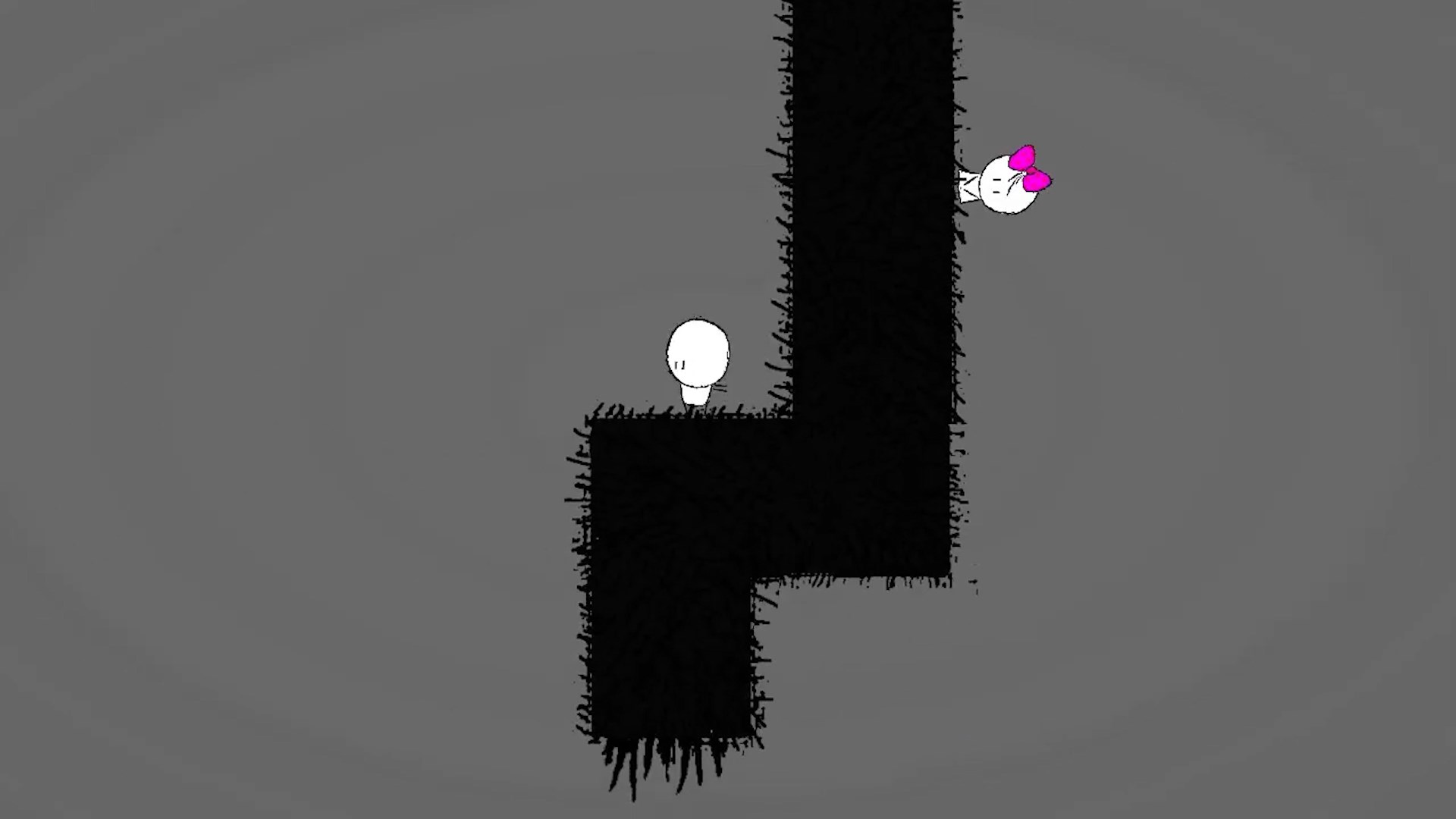 We don’t have an award for best value Xbox game, but – if we did – Him & Her Collection would probably make the nominations shortlist. It’s the Orange Box of budget indie puzzlers, bringing you three complete puzzle games for an absolute steal: £3.29 of your finest sterling.

The three games are Him & Her, Her Challenges and Her & Him, all accessible from a single menu within Him & Her Collection. That’s somewhere in the region of seventy-five levels across three games, which is a pretty darn decent £ per level ratio. The catch is that, while there are three games on offer in the Him & Her Collection, they are all near-identical. They look the same, they play the same, and the only real difference is that, occasionally, you stop playing as Him and start playing as Her.

There’s a simple, Fez-like premise to the Him & Her Collection. You play as Him (or Her) in a black-and-white environment. Your aim is to reach Her (or Him), so you can have a smooch. The reason we invoke Fez is that, by moving to the end of the platform, you can twist the camera through ninety degrees and appear on the side of that platform. It’s a game that plays loose with gravity, and allows you to literally climb the walls, tilting the camera as you do so.

If Her is waiting for you, upside down, on a platform above, then you might want to walk around on a square platform until Her has been repositioned so that she is below you. Then you can jump off the platform and let gravity do its work, leaping onto the platform where she resides. Most of the puzzles have you using gravity in this dual capacity: jumping and falling when you need to jump and fall, or pivoting round platforms so that gravity is in a new direction.

It’s a difficult premise to put into words, so you might want to watch a trailer to fully comprehend the idea at the centre of Him & Her Collection. Because it gets complicated from there: soon, portals appear, zapping you from one section of the arena to the next, or platforms get tied to ropes, swinging like pendulums as you tinker with the direction of gravity. Puzzles get knotty, and far more complicated than simply twisting a camera around.

Williams, the makers of Him & Her Collection have hit upon something that works really well. With some very basic elements – they just need spikes and platforms – they can create some fiendish puzzle boxes that are good fun to complete. Often, you arrive at a solution by simply exploring, seeing if you can reach far-flung ledges, and then assessing whether it’s put you in a better position. It’s less trial-and-error, and more trial-and-recalibrate, as you are jabbing the Y button to see a zoomed out view of your current position, and plotting a new route to your destination.

Artistically, it’s a bit sketchy. Him & Her, the first game in the collection, has some interstitial chapters that seem to imply that a story is being told, but it’s vague and doesn’t really go anywhere. And the graphics are loose and sketched, leaving very little room for charm or colour to seep in. The monochrome palette also has the unfortunate effect of making some things unclear. Spikes merge into the background, and it’s very easy to die without believing you will, while some elements – trees, for example – look like they might block you from walking somewhere, but don’t, actually.

By being so artistically bland, there’s a knock-on effect on variety. With so many levels, and no visual difference between the three games, you can often wonder if you’ve played a specific level before. Each of the three games has its own tutorial and gradual learning curve (clearly, they were launched individually in a previous life), and this can mean that levels feel astoundingly similar. There’s only so many ways that you can make a Him & Her level, certainly with the limited building blocks that they have to hand. The result is a persistent sense of deja vu.

A Hard Mode dangles the prospect of variety and a greater difficulty, but it’s one of the worst attempts at a ‘hard mode’ that we’ve encountered. Rather than sprinkle more traps around the level or give you a time limit, it simply snatches away your ability to see the whole level. The problem is that the map view is essential. You can’t see the whole level from your game screen, so you’re making leaps of faith and having to guess where platforms may or may not be. It’s an essential part of the game, and removing it isn’t fun; it just makes the game less than whole. Hard Mode sucks.

For all the negativity, there’s still a good case for picking up the Him & Her Collection. The bedrock is solid: shifting gravity around a ninety-degree axis works rather well, and there are plenty of levels that take advantage of that simple premise. Often we did a little inward clap as we realised what Him & Her Collection wanted from us. All we had to do was wander for a bit, and the solution presented itself.

The price is the closing statement. £3.29 for three games, each podgy with levels, is an absolute steal.  Sure, it has baggage – three games that look the same and play the same will always have critical repetition issues – but puzzle-lovers should note that Him & Her Collection is a hefty compendium, and it has a lot to offer to anyone that plays in short doses.

You can buy Him & Her Collection from the Xbox Store