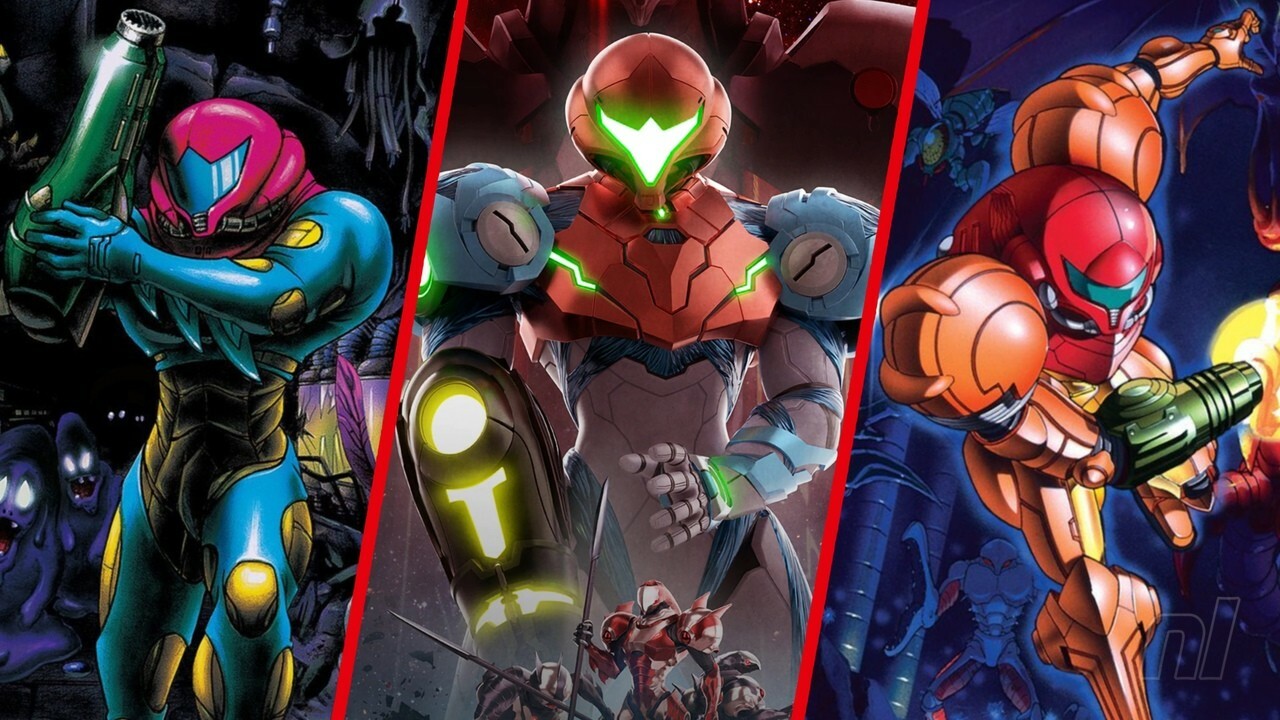 In the years and decades since its debut in 1987 (’86 in Japan), the Metroid franchise has gone on to become one of Nintendo’s tentpole franchises, with games releasing on near enough every console bar the N64 and Wii U (Virutal Console doesn’t count!). Despite earning somewhat lukewarm commerical success when compared to the likes of Super Mario and Animal Crossing, Metroid has more than earned its place in the hearts of Nintendo gamers worldwide; heck, you only need to look at some of the reactions to Nintendo’s announcement of Metroid Prime 4 to appreciate just how impactful the franchise has become.

So with that in mind, we thought we’d share our introductions to the franchise, and we want to hear your stories, too! Which game did you start with? What drew you to it? Did a friend or family member introduce you?

If you haven’t played the franchise at all yet, that’s okay! Some of us have huge gaps in our Metroid history too, and you’ll notice that only one of us (me!) has played through the Metroid Prime Trilogy, so you’ll be fine company here.

Enjoy, and be sure to share your stories in the comments below!

I suppose I got into the Metroid franchise fairly late, all things considered. My first entry was Metroid Prime for the GameCube when it launched back in 2002. I remember reading about it in issues of NGC Magazine and being totally blown away at how stunning it looked. Thinking back, I’m not sure I even realised at the time that the franchise actually started out as a kind of 2D adventure series; it was only when I saw Metroid Fusion for the GBA and subsequently did a bit of research that I realised that, actually, Metroid Prime’s first-person view was a completely new take on the franchise.

Needless to say, I fell in love with Metroid Prime hard; locations like Phendrana Drifts and Phazon Mines were among some of the most beautiful environments I’d ever seen, and the balance between exploration and combat was simply perfect. So, naturally I dove head first into the franchise and played through the original Metroid, Metroid II, and Super Metroid, before picking up Metroid Fusion at a later date. Despite the obvious limitations of the debut title on NES, I could see how the game had influenced the franchise going forward.

It’s probably safe to say that Metroid is my favourite Nintendo franchise to this day and I owe it all to Metroid Prime. When nothing else would catch my eye, Prime was the game I’d fall back on – every time. You can imagine my utter delight when Nintendo announced a fourth entry would be on its way to the Switch… Speaking of which, any updates on that, Nintendo?

Admittedly, it took me a really long time to fall in love with Metroid the way I am now. That probably wasn’t helped by the fact that my first Metroid game was the GBA Classic NES Series release of the original Metroid. I bounced off of it, hard. But I really wanted to know what this cool, orange-cladded bounty hunter was like that I’d seen in the original Super Smash Bros.

So I did some digging around online and Metroid Fusion immediately jumped out at me. I managed to get hold of a copy, played through it – even scared myself to death a few times – and loved it. Fusion’s stalker-like foe SA-X had me crawling under my bedsheets, even as a teenager. But even then, it still took me a while to say I adored Metroid. I tried playing the original a few more times through those Animal Crossing NES’ you could get once upon a time, but it was the SNES Classic that finally pushed me to try out the revered Super Metroid in 2018. Now that’s a video game with a terrifying reputation. But it turns out there’s a reason for that – it’s phenomenal. That atmosphere, map, and sense of progression is still unmatched, even today.

The rest is history. Super Metroid made me go back and replay Fusion, pick up Zero Mission, and even try the original Metroid and Metroid II again. I’m admittedly still missing many gaps – Prime, Samus Returns – but Dread has cemented this series as one of my favourites. I’m glad I kept trying.

I’ve never actually played a Metroid. Maybe I’d really enjoy them, I don’t know! But I still have a Metroid story, sort of. When I was applying to the open Staff Writer position at Official Nintendo Magazine — a position that I would end up being chosen for out of 650 applicants (spoilers, but it’s important context!) — there were a bunch of tests and interview stages I had to pass through, once they’d read my application.

The first was a phone chat. Easy peasy. I chat all the time. The second was an interview with the Editor of ONM and the overall Editor In Chief of a bunch of the magazines, which was a little daunting, but I think I did alright. The third was a test article — I had to write about 300 words of news in an hour, and Twitch Plays Pokémon was in its first few days back then, so I just wrote about that. But the final test was one that I was sure I had failed.

It was a Nintendo quiz, you see. I was 22 at the time, fresh out of university, and though I had played tons of games from the N64 to the GameCube to the Wii to the DS and 3DS, not many of those games were the ones in the quiz. I aced the questions on Professor Layton, Ace Attorney, and Mario (it would have been embarrassing not to get the Mario ones right), but when it came to F-Zero and Metroid questions, I just… had no idea. And people get really weird when they find out that a Nintendo writer hasn’t played a Metroid, which always bothers me — I mean, no one gets weird if you haven’t played Ace Attorney, despite it being a seminal work of whatever-that-genre-is. It’s always the shooty games that people care about. Sigh.

So, I was convinced that I’d blown it. Completely messed up, thanks to my hole-filled knowledge of Nintendo blockbusters. At that point, I thought, “might as well have fun”, and did a bunch of doodles. I drew Blathers in the margins of the quiz; I wrote “Falcon Punch???” as the answer to an F-Zero question, and I drew a little Samus next to a Metroid question I did not answer. Apparently… that’s what got me the job (alongside my writing, obviously). The Editor didn’t mind that I hadn’t played all the games. You can teach someone to play games. You can’t teach ’em to write as easily.

I still haven’t played a Metroid, but that quiz taught me that the games I have or haven’t played don’t define me or diminish my value. That’s a nice lesson to learn.

Metroid is always a franchise that fascinates me. Not because I am a huge fan of the games, but because – despite for my unabashed love for platformers – I have never really warmed to any of them.

The first Metroid game that I ever played was Metroid Fusion on the GBA. This was in an era when I would buy any and all games that I could get my hands on, regardless of what anybody said about them. I was drawn to this particular title, however, due to my love of Super Smash Bros. Melee, which I played near consistently on my friend’s GameCube. I always wondered who the badass with the gun was, and that lead me to Fusion.

I can’t say that this first experience really stuck with me (wow, what a way to start the site’s new feature), but I can remember that I wasn’t completely blown away. What has followed in my gaming life has been an inconsistent relationship to the series: a little bit of Metroid Prime Hunters here, a little of Samus Returns there.

Maybe contributing to this returning feature will bring me rushing back into the series when I read others’ undying love for the franchise. Somehow, I doubt it.

My Metroid story started, oddly, on DS. I had held off getting a ‘Phat’, but the slimmed-down Lite and one particular game tempted me enough to crack open my wallet and I picked up a very shiny black console and Metroid Prime Hunters.

Going back now, it’s all rather fiddly, but at the time it felt incredible to have a game so intricate on a system so dinky. It’s no classic, but its bounty hunter-based battling (not to mention the sublime Metroid Prime Pinball) got my foot in the series’ door and led to further investigation.

I ended up finding a loose Zero Mission cart (I wanted something I could play on my Lite, plus it was a remake of the very first game, so it made eminent sense), and I was hooked. I soon caught up with Super Metroid, then Fusion (as part of the 3DS Ambassador Program), and went back to Return of Samus on GB and the 3DS remake, and finally Dread last year. All fine games, although my heart belongs to Zero Mission, which surely ranks as the best remake ever remade.

The Prime series is still a personal blind spot — or not having read all the above! — and I’m hoping the rumours of a Prime 1 Switch remaster are true to get me clued up for Prime 4 when it releases sometime in Q4 2027.

Like most Nintendo IPs Metroid came into my life by accident. When I had my brick Game Boy it was standard practice to trade cartridges with my high school buddies so we could we play the biggest variety of titles possible. One such friend was stuck on something called Metroid II: Return of Samus. The name was only familiar from local TV advertising for the NES version. I borrowed it and was quite surprised to find a pocket Turrican-style exploration game with a lot of hidden depth, namely once you get the Spider Ball upgrade. By the time the staff credits rolled I knew I had just played a Game Boy masterpiece for the ages. It took me many more years after the fact to discover it was Turrican who had first sought inspiration in Samus galactic adventures.

Fast forward a few years later and I find myself eager buy a Super Game Boy. However at the store there was a equal sized (huge!) Super Nintendo game box next to it: Super Metroid! Despite the German-only player guide, I decided to use my birthday earnings on it and, well… here I am today looking at that very same huge box on the shelf while sharing this story with you fine folks. Along with F-Zero and Star Fox, Metroid is part of my Nintendo “Triforce” of science fiction escapism. The series impact on my life remains quite palpable.

So there you have it! We hope you’ve enjoyed this little peek into how each of us was introduced to the Metroid franchise.

Anyway, now we want to know how you were introduced. Cast your vote in the poll below and let us know which game you played first, then give us a bit of context with a comment!

Which game in the Metroid franchise did you start with? (450 votes)