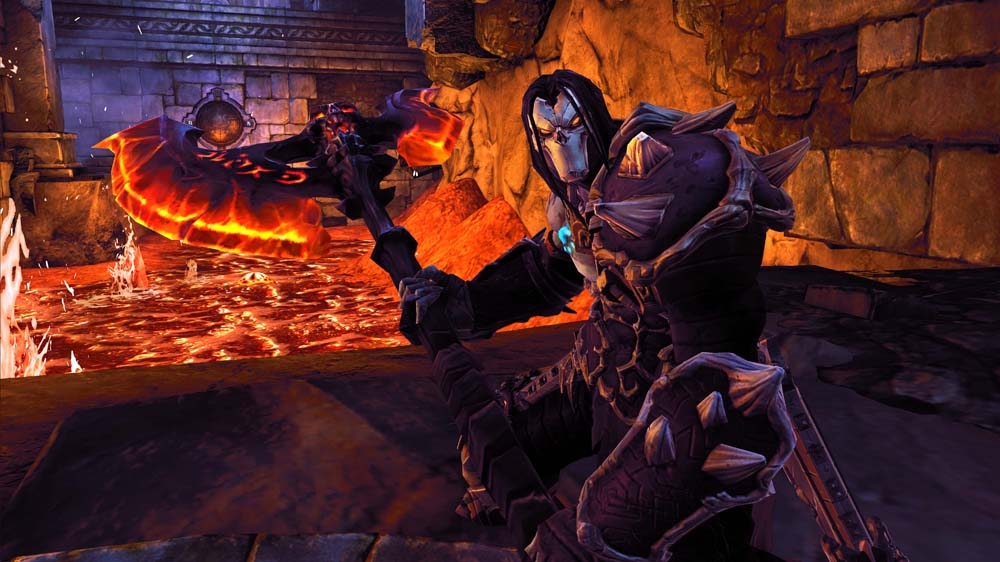 It is hard to believe, as I sit down to type this on a baking hot August morning, that the subject of today’s Looking Back was released 10 years ago – way back in 2012. It barely seems a blink of an eye since I was playing Darksiders II on my Xbox 360, and yet, here we are, a decade on and two hardware generations later, still thinking about the game.

The first Darksiders came from out of nowhere and blew me away with its mix of exploration and combat, so when Darksiders II released, featuring the chance to control Death himself, well, wild horses couldn’t have kept me away. So come with me back to 2012, when fuel prices were manageable and the world didn’t appear to be going to hell in a handcart, as we Look Back to Darksiders II.

Doing my research for this game there are a couple of interesting facts that crop up. The first is that, at a budget of $50 million, this was not a cheap development process. Another fact is that this was a launch title for the brand new (at the time) Nintendo Wii U, but I can’t imagine trying to play this game on that massive controller.

Now, as I said, the first Darksiders was a real breath of fresh air, and the character of War was great as well; both to play as and in terms of the lore of the game. In Darksiders II, the events play out in parallel to the first game. While War is accused of bringing about the end of Humanity, Death, who is completely convinced of his brother’s innocence, sets out to prove it by erasing all evidence of a crime. He plans to do this by bringing Humanity back from the dead. If Death himself can’t do this, who can? What follows is a massive game across various different worlds, including Heaven and Hell, and a series of fights, not only against massive bosses, but also against increasingly powerful run of the mill enemies. Can Death succeed and bring Humanity back to life, or has he bitten off more than he can chew? Well, no spoilers here, I suggest you go and play it.

Darksiders II had a very well designed look, much like its predecessor, and Death in particular was a good looking character, with a skull mask clamped over his face to bring him in line with the well known look of the Grim Reaper. He had a horse, fittingly called Despair, and with the size of some of the areas, having a horse to speed up the travel made things a lot easier. Add in horse-based combat, with Death being able to use firearms from the seat atop Despair, and the pace of the combat was right up there with the best of the genre.

The soundtrack was great as well, with fully voiced cutscenes helping to set the scene very well. With the voice acting being on point, immersion was pretty much guaranteed. Swinging scythes, booming firearms and roaring monsters completed the soundscape, and it fitted the game perfectly.  All in all, there were no problems with the way the game was presented. Even today, the original game stands up, but the remastered Darksiders II: Deathinitive Edition, apart from being one of the worst puns ever, looks even better when it harnesses the power of the newer generations of console.

However, a game can look as good as it likes, but if the gameplay isn’t up to much, then it isn’t going to be any fun. Luckily, Darksiders II delivered.

As has become standard with these games, it is roughly divided into two halves: one half is the combat, including some epic boss fights, and the other is the varied platforming/exploring/problem solving side of the game.

Looking at combat first, Death had two sets of melee weapons, in addition to his firearm to choose from. His main default weapons were twin scythes (what else was Death going to use, in all fairness?), and he also carries a backup weapon. These are either slow and powerful, like hammers, maces or axes, or fast but weak, like bladed gauntlets. As you progress through the game, you can learn new combos from various trainer characters dotted about the place, and soon you will be an enemy mincing machine. Again, as you go through the various dungeons and defeat enemies, you will come across different weapons and armour that Death can equip, which give him increased stats if you are lucky; getting yourself suitably tooled up before the end of the game almost becomes a mission in its own right.

The boss fights are all very varied too, although the one that sticks in my mind, even after all this time, is the first major boss, when we had to defeat a giant Corrupted Guardian statue; a very exciting multi-stage fight, seeing Death scaling the boss at various stages and gradually knocking it down to size.

The other half of Darksiders II is just as much fun, just looking about the place, trying to find the various collectible items, getting in fights and trying to earn enough experience to level up, find new gear and so on. The puzzles were also enough to keep the old grey matter ticking over, with there not always being an obvious path to follow – a certain amount of lateral thinking was required. Gaining new abilities was key to this, with things like the grappling hook upgrade (it does have a fancy name, but that is basically what it is) being useful, alongside other abilities such as Voidwalker to help you progress. Normally, in true Metroidvania style, you’d find the thing that you need to defeat the boss just before the boss itself, and then revisiting previous areas with new abilities would see new areas open up. Aside from the fighting, there was a lot of game to go at.

I thoroughly enjoyed both my stints with Darksiders II, both in original format and then in the remaster. Admittedly, it isn’t quite as compelling as the first Darksiders, which was a game I couldn’t put down until I beat it, but the sequel more than stood up. In fact, and maybe slightly controversially, I think the Darksiders franchise has actually got worse as the series continued: Darksiders II was worse than the original, and Darksiders 3 was worse still.

With it being available with all the DLC in the Deathinitive Edition, there is still a case to play Darksiders II today – you’ll find it on the Xbox Store in original form or via that Deathinitive Edition, playable on Xbox One and Xbox Series X|S. But what about you guys out there? Did you play this game on either of its releases, or do you plan to play in the future? Let us know in the comments.