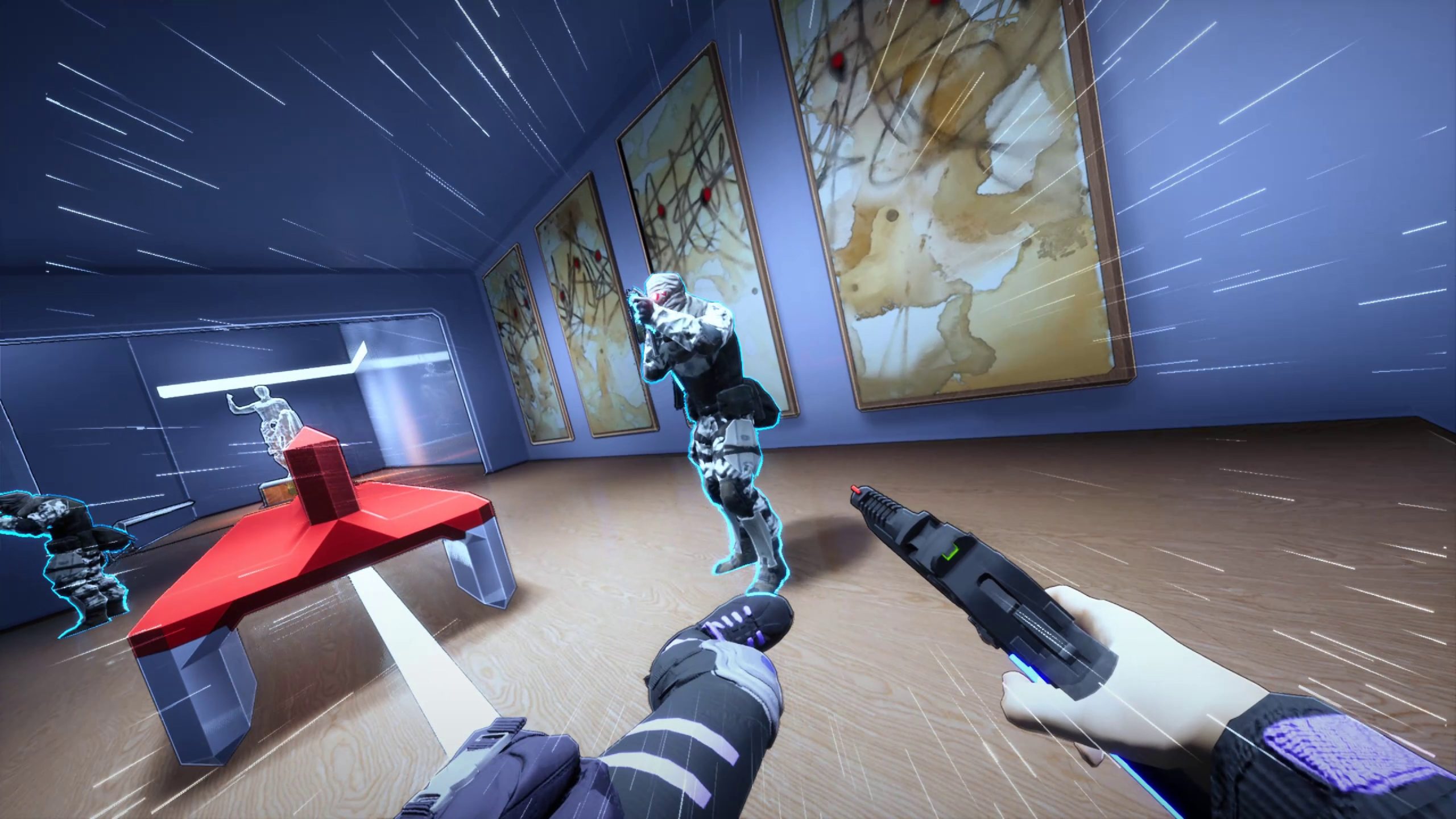 Severed Steel is in that category of games that chases a kind of bliss. It’s the bliss that comes from an exquisite flow between moves; the bliss of tapping only a few buttons, but pulling off the most overblown, balletic manoeuvers that give the impression – to a watcher perhaps – that you’re some kind of esports pro. We’d put games like SUPERHOT, Mirror’s Edge, Ghostrunner and perhaps even Max Payne in there. We’re rubbish at them, but we can’t help but look good while we’re fumbling.

Severed Steel is a first-person FPS that sticks to a reasonably conventional campaign format. We were surprised by the lack of multiplayer options until we started playing: there’s no way that Severed Steel could have been compromised into the shape of a battle royale, say. The reasons soon became clear.

Story-wise, Severed Steel is thin as crepe paper. You’re an assassin who wakes in a trash compactor (“I’ve got a bad feeling about this”), with one arm missing. Then you’re working through the stronghold of the enemy who unceremoniously dumped you in there, kicking ass and taking names as you go. Interstitial motion comics add a little to the story, but, honestly, we didn’t need stacks of narrative. This is about the ride.

Woof, and what a ride it is. You’re barely out of the first room before you’re overburdened with movement abilities and maneuvers. If you’re like us, you’ll be bewildered and unable to keep up with each addition, finding empty rooms to practice within the levels of Chapter One. The list is enough to make Lara Croft sneer: you can jump, double jump, wall run, slide, cartwheel over enemies, pick up guns mid-movement and even do that action-movie-staple of leaping arm’s first through small windows.

Almost all of the above are situational, making the actual wizardry of pulling off the moves astonishingly simple. You can wall-run, leap over a chasm, punch a guard and then steal their gun before shooting them in the back, all with three buttons. Severed Steel achieves the state of bliss we were banging on about, mostly by exaggerating every button press to the point of ridiculousness. It feels as good as it sounds.

There is a counterpoint, but we feel a bit mean for pointing it out. It’s like being given a giant chocolate sundae and complaining that the flake in the top isn’t a Cadbury’s Flake. The situational approach to movement can mean that you’re pulling off a move that you never intended – “welp! I wall-jumped when I meant to climb!” – while there’s a whiff of over-extending, as you can find yourself catapulted into the sky by a sequence of moves that were so blisteringly fast that you don’t know how you got there. And the carnage can cause some drops in frame rate.

But let’s be clear here. Combat in Severed Steel gives us goose-bumps. We haven’t even mentioned our two favourite moves: the arm cannon and the slo-mo. The arm cannon is a first-chapter unlock, and you have a finite number of charges per level. But aim at a wall and fire, and – well – things go a bit Red Faction. The wall collapses, leaving you free to slide or window-leap through the opening to the other side, spinning wildly to slam a shotgun shell into the face of a merc. It’s glorious, and gives far more control than we expected over the environment. Speedrunners rejoice!

And then there’s that old chestnut, the slo-mo, or ‘bullet time’ if you want to get all 1999. Holding LT puts you in a state of slow motion, and any Max Payne player will know why this feels great. Sliding under a door, through the legs of an enemy, and then slowly spinning to headshot them, is the dictionary definition of ‘chef’s kiss’. Killing enemies tops up the slow-mo, so there’s every opportunity to chain deaths together.

Again, we’re going to be a party pooper here and add two to the wishlist for Severed Steel 2 (we’ve seen the end credits: we know it’s entirely possible). The slow-mo is a little too generous, and we spent most of our time in Severed Steel in its thrall. It made the game’s two hour-long campaign (not a significant amount for the price, but boy is it concentrated goodness) slightly too much of a breeze. Equally, and taking a leaf from John Wick Hex, we would have loved to have seen a replay, with all of our moves sped up, at the end of the level.

There are six chapters here, and they only get better as they go on. What starts as clinical and a little characterless becomes more full-on. Importantly, every opportunity is taken to offer you dozens of angles of attack. The arm cannon offers almost limitless possibilities, while the rooms are jungle gyms waiting to be clambered over. You could play the levels in Severed Steel twenty times and clear the room a different way each time.

And while we grumbled about the lack of play in the campaign, a New Game+ opens up after completion that gives you some hard mode shenanigans, while a Horde mode offers challenge rooms. If you’re caught in Severed Steel’s web, then you can absolutely stick around for more. We’d have taken some more highscore functions to compete across the globe, but we’ll take what’s here.

There’s a justified comparison with Ghostrunner to be made, but – for our money – there’s a touch more openness, a little more grace to Severed Steel. It might not have the visual flourishes of Ghostrunner, but we felt more kick-ass. In a fight, we think Steel would have it. And the soundtrack absolutely slaps.

Severed Steel is breathless. It’s a dervish of wall-runs and gunplay, and we struggle to think of a game that makes us feel so powerful, so much better at gaming than we actually are. Sure, it’s over in two flicks of a lamb’s tail, but those flicks are glorious and in slow motion.

You can buy Severed Steel from the Xbox Store