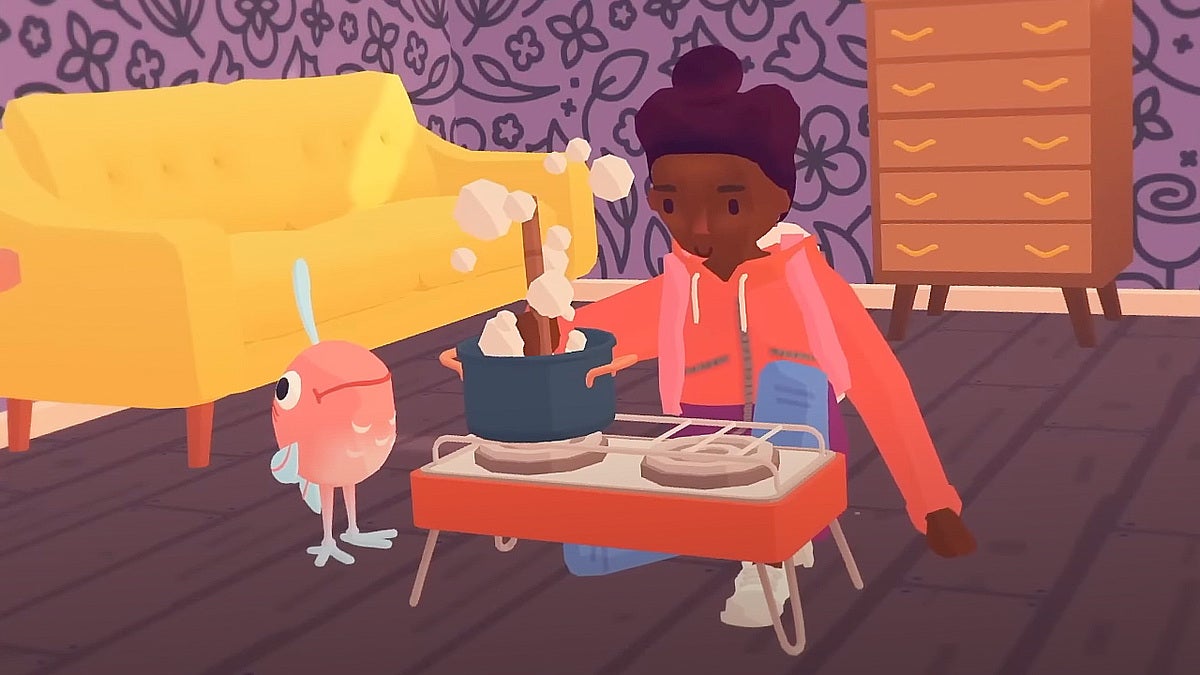 Have you ever moved to a new town and, what do you know, there’s an abandoned farm ready for you to claim and revitalize all on your own? With adorable creatures to collect and eccentric townsfolk to befriend, Ooblets doesn’t follow a completely unfamiliar formula. But while the unique twists it adds to that structure aren’t very deep, they did keep me smiling for the roughly 30 hours it took to finish the main story.

You arrive as the newest citizen of Badgetown, a down-on-its-luck community you immediately start working to improve that lives in harmony with charming creatures called Ooblets. Though they’re all little and very cute, their designs vary pretty widely. You have Ooblets like Dumbirb, an actual small birb… bird friend; Clomper, a round, fluffy puppy-looking chum with stick horns; and Firmo, one of a few robots on the roster.

Rather than being caught, you grow your own Ooblets right out of the ground, who will then act as your cutie-patootie farm assistants. Of course, they serve a higher purpose than that too – Ooblets are also used to battle on your behalf in order to earn new Ooblet seeds or to solve a plethora of local problems. Violence isn’t the answer in Ooblets though – dance battles are. It’s a clever twist that removes the questionable ethics present in some other monster collecting games.

Violence isn’t the answer in Ooblets though – dance battles are.

Unfortunately, the dance battles themselves never evolved enough to live up to their creative theming. Battles play out as card-based fights, where different cards represent fanciful moves your Ooblets can perform, with silly names like Takey Tap Tap or One Step Pep. Each Ooblet has its own set of signature move cards, which makes collecting all the different species extra fun as I never knew when a new game-changing card would be held by the widdle Ooblet I just found. That also means constructing a party is like a roundabout way of building a deck, but there’s less choice than in similar games since you can’t alter the generic cards that make up the bulk of it.

I often found fantastic synergy between the signature cards of two Ooblets, but some other moves simply contributed to deck bloat that made any cool combos inconsistent. Purchasable cards are also permanently unlocked and can never be removed from your deck once they’re added, making that problem potentially worse as you progress. This wasn’t a huge issue during my first story playthrough since dance battles were always easy or manageable, and I never memorized every Ooblet’s signature moves well enough to accurately prepare counters anyway, but not being able to fine-tune my “deck” was still frustrating. A fun enough my-first-deck-builder, but not quite up to snuff for someone who’s put hundreds of hours into dedicated games of the genre.

This system encouraged – no, demanded – that I keep up on unlocking new recipes and growing new crops on my farm.

Thankfully there’s a lot more to Ooblets than just dance battling, so the shallow deck-building doesn’t detract from the whole experience. In fact, battles themselves are often the literal fruit of your labor on your farm. To get a new Ooblet seed, you need to find that Ooblet out in the world, then bribe it into a dance battle by giving it the specific items it demands. After claiming victory, you can tell the opponent they did a good job, and it will toot out a seed for you to grow a new friend. This system encouraged – no, demanded – that I keep up on unlocking new recipes and growing new crops on my farm, or else I might miss out on getting a cool new friend, as well as an opportunity to make some cash.

Welcoming a new Ooblet meant I could scan it to add to the almanac and earn Gummies, Ooblets’ currency. Each Oooblet has three variations, too–common, uncommon, and Gleamy–all of which you can turn in for increasing amounts, making it wise to stay stocked on duplicates of each enticing item I discovered. I can’t tell you how many times I stumbled upon a rare Gleamy Ooblet (its equivalent of Pokemon’s Shinies), then excitedly scrambled to grow or craft the item it demanded before it disappeared at the end of the day. Glob, I struggled hard finding the Soggy Bread recipe in time to battle this dang pink Gleamy Bibbins. But it’s gorgeous, so, worth it! You can even give it a matching bow tie!

I played Ooblets on Nintendo Switch, and it’s worth quickly talking about its performance on the system. Despite the occasional hiccup, particularly at transitions between battles or talking to people, it held up okay. That is, until one particular, late game zone I don’t want to spoil. You don’t have to spend much time there and I imagine it’s a beautiful area on other systems, but it stuttered so badly on Switch it made me nauseous. The Switch just can’t handle blades of grass blowing in the wind, I guess. There are some console-specific bugs and overlooked details as well, like not being able to use the ZR or ZL buttons to tab through menus while the Switch is docked for some reason, but the developers at least seem to be aware and hopefully those issues will be patched out in the future.

I appreciate Ooblets’ well thought out interconnecting systems, which made every task rewarding in its own way, no matter how menial. And there are a lot of tasks. Tinstel Tasks are the main “quests” given by the Mayor (yes, she’s a child) that benefit Badgetown in some way. There are so many micro-tasks that may or may not support these – like maintaining your farm, decorating your house, partaking in Dance Barn dance battles, etc. – that I sometimes struggled with time and energy-management, as one does in farming games where time passes and stamina must be managed. But that also meant I was rarely bored while playing Ooblets, and found myself easily sucked into the flow of completing odd jobs to accomplish bigger goals for hours.

I was all smiles and laughter at the absurdity of it all.

All of these mechanics are accompanied by sickenly adorable, offbeat dialogue and writing that I got a huge kick out of at first. It’s not fishing, it’s SEA DANGLIN’. This isn’t a pepper, it’s a SPICYSPEAR. Coffee? No, BEANJUICE. I could go on, but trust me when I say I was all smiles and laughter at the absurdity of it all, and desperately wanted to point out all of the shenanigans to my housemates, like that time I got an instrument and tooted my way around town to harass my neighbors.

The townsfolk say the darndest things, making their dialogue a reward for talking to them enough on its own. But talking to people also “levels up” their relationship with you, prompting them to gift you with a friendship sticker, unique clothes, Ooblet accessories, or even useful items each time. Multiple incentives are very splenda, as the locals would say.

Eventually though, the novelty of that cuteness did wear off a bit. That was especially true during one particularly long and slow lull of near non-progression where I thought I’d be stuck in Badgetown for the entire campaign. I found it very difficult to make the money I needed to continue during this stretch, with my poverty only solved by collecting Spicyspears so I could craft and sell Hop Hop Hop Dobs at a high net profit. That may sound like gibberish, but it was a rough blip in the pacing to be sure.

You do eventually get to go to uniquely themed locations, like the extra spooky Nullwhere or the boardwalk town of Port Forward as part of the slowly rolled-out story. Some of the objectives in these places seem copy-pasted between each other, like having you win a series of dance battles, which even your character jokes about. But one of the more unique ones involved beating a silly caricature of a gamer bro’s high-scores in a series of arcade-like minigames, which I delighted in. On the complete opposite end, however, another area involved literally climbing up and down a plain mountain path repeatedly, which bored the heck out of me. That makes the campaign a bit hit-and-miss, but the loose, overarching storyline does culminate into some funny, biting satire by the end that I won’t ruin.

Drink up some cyberpunk coffee in Caffeine: Victoria’s Legacy
Moonscars combines Dark Souls and the gothic on PC, Game Pass and console
The PS5 features bringing A Plague Tale: Requiem to life
The Dark Pictures Anthology: Man of Medan PS5 Upgrade Not Available for PS Plus
Stadia Will Close In January, Google Issuing Refunds For All Hardware And Software Purchases