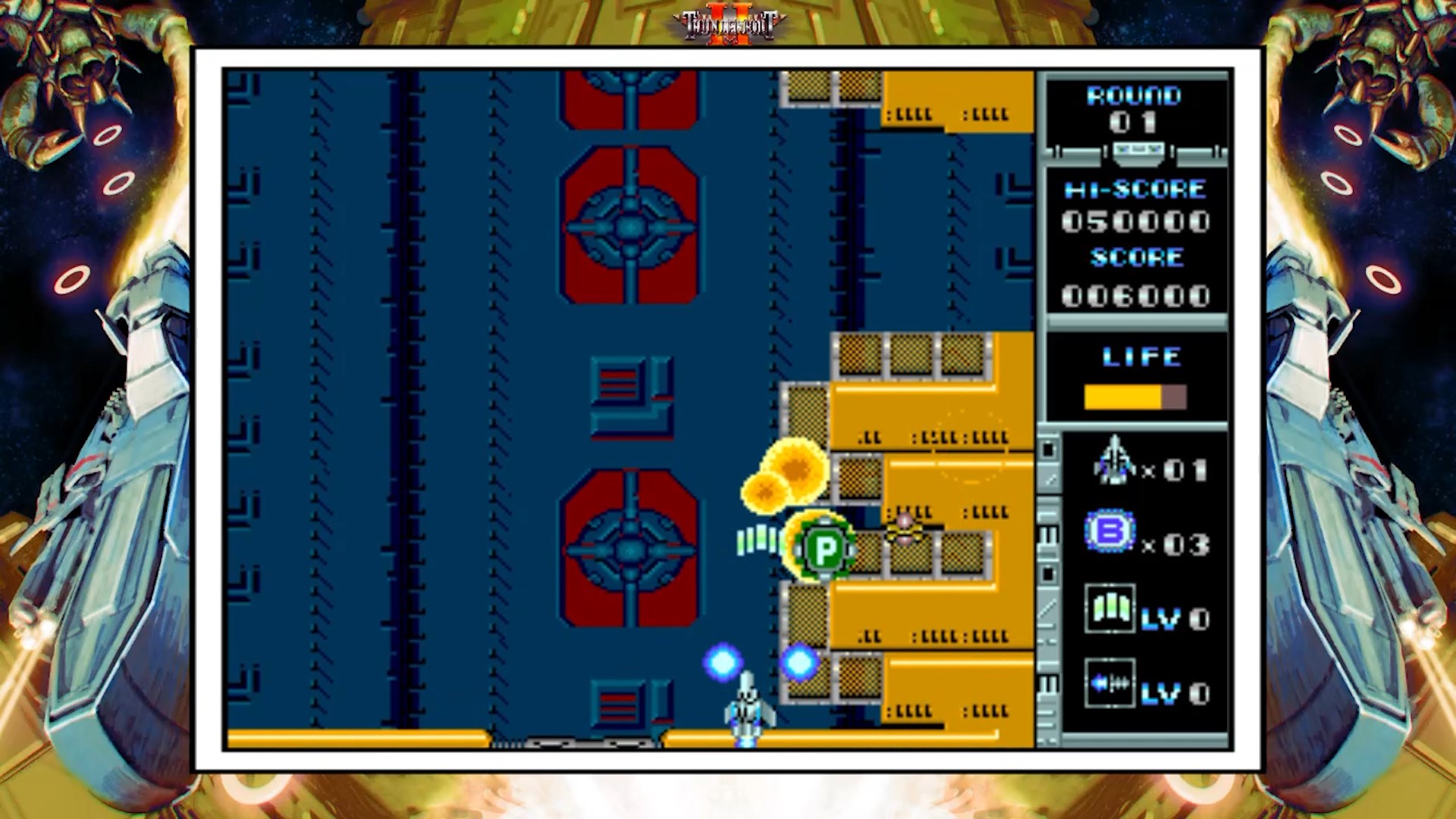 Shoot ‘em up fans have been well-served over the past two months. When it’s not Andro Dunos 2 or the Azure Striker Gunvolt series coming to Xbox, it’s the majority of the Psikyo back catalogue being re-released individually. We’ve reviewed a fair few of those personally, and we’re seeing mechs and bullets in our sleep.

Into that fray comes QUByte Classics: Thunderbolt Collection by PIKO, an absolute mouthful for a release that’s relatively easy to describe. What you’re getting here is a double pack of Thunderbolt II on the NES/Famicom (listed as simply 8-bit here) and Thunderbolt II on the Sega Megadrive/Genesis (16-bit). While the releases share a name and a vertical shooting viewpoint, they were and are very different titles.

The internet can’t tell me too much about Thunderbolt II. For example, what happened to Thunderbolt I? What we can surmise is that these were two unlicensed releases on their associated consoles, with the first published by Gametec in 1993 and the latter by Super Chip in 1995. By all accounts they were Taiwanese in origin, and the original cartridges are nowhere to be found on eBay.

It’s fair to say that QUByte Classics have found yet another deep cut. They’re a publishing house who aren’t particularly interested in exhuming cult favourites or mainstream hits. They like to wheel out games that barely anyone has heard of, let alone had some fondness for.

Blowing on the cartridge and slotting it in, we started with Thunderbolt II (8-bit edition). It’s a simple proposition, to the point of absurdity. You are a ship flying up the screen, facing off against waves of ball-like enemies. There are bosses, but these are anonymous enough that we didn’t realise when we had defeated one. An achievement popped for clearing the level and boss, and we had to do a double-take.

There’s a neat approach to power ups. Blue, brown and green barrels bounce down the screen, and they each snap a different attack onto your ship. Browns give you a four-way shot, while blue evolves into a five-way pattern. The nuance comes from stacking them: avoid unwanted colours and chain your favourite, and you can soon upgrade it to something special. It’s the sole talking point from Thunderbolt II (8-bit edition).

Everything else is a mulch. Enemies are spheres of varying colours, or spheres with the odd bit of metal jutting out. There are three levels, seemingly space, city and desert, but all blend together to make swathes of a single texture. Bosses, as we have mentioned, are almost indistinguishable from the average mob.

But what makes us want to turn off Thunderbolt II (8-bit edition) is how technically frumpy it is. The frame rate stutters and slows constantly, which is inexcusable for a reissue of a NES game. The collision detection is brutal, sending you back to the spaceport for even the most minor of grazes from an enemy. And, most of all, the enemies are kamikaze. The biggest threat is not from bullets, but from enemies appearing from nowhere, at speed, and careening towards your ship like battering rams. It’s a shoot ’em up where you feel like you’re in the way.

QUByte could have softened the experience by taking a leaf out of City Connection’s book and reissuing Thunderbolt II with plenty of options. There is no capability to fiddle with game options like lives and continues. All you get is the baked-in save system that every QUByte Classic has, and it’s fiddly and long-winded to use.

If we were to review Thunderbolt II (8-bit edition) on its own, we’d have deliberated and gone for the card with ‘2’ on it. It’s entirely characterless, without a single graphical element that we could point to and admire. Most of all, it’s technically ramshackle, and we can’t help wondering why QUByte Classics: Thunderbolt Collection by PIKO chose to reissue it. We can only guess that completion forced their hand: they wanted to rerelease the 16-bit edition and got this one chucked in for free.

Thunderbolt II (16-bit edition) is better. The technical kinks have been ironed out, and – although it can’t hold a candle to Psikyo’s output, for example – it at least ticked us for an hour.

We’re in vertical shooter territory again, and the one redeeming feature of Thunderbolt II (8-bit edition) has been carried over: you can collect and stack special attacks to become increasingly powerful. Green, by default, is a fairly standard shot, while blue is a Star Soldier-like spray of bullets, and gray gives you a wave weapon, which is ace. The result is that you’re often dodging power-ups as much as you are collecting them, and it’s a pleasant change of pace.

Smart bombs drop, allowing you to clear a boss in roughly three uses of them, and M and H power-ups give you partnering ships that either fire at your enemies or defend you against them. Speed-up boosts round out the roster. There’s a decent number of things to collect, and the screen can be littered with them.

You can actually spot and recognise bosses in Thunderbolt II (16-bit edition), which is a welcome improvement. They all look like they’ve been randomly suggested from the game Spore. They’re variants on worms and centipedes, all using the same structure, so they’re still faintly repetitive and have you hankering for Gynoug-style trains and boats with faces gurning on the front. But their attacks are somewhat varied, and you at least feel like you’ve achieved something once they have been downed.

Thunderbolt II (16-bit edition) is not a fast game, nor is it a difficult one. It’s easy to chug through its opening levels, with only the final two posing anything like a threat. But the speed rankled with us: we felt like we were yanking the Thunderbolt ship across the screen, as it dragged its feet behind it. Speed power-ups improved things, of course, but the default speed could have been so much more.

But Thunderbolt II (16-bit edition)’s biggest crime isn’t its speed: it’s a lack of personality. While it has more charisma than the 8-bit version, it’s still a faceless little shooter. Enemies are variations on blobs, and backgrounds are still blandly uninteresting. This is the console that gave us Super Fantasy Zone, Gynoug and Forgotten Worlds: it’s capable of producing maps, levels and bosses that make you take note. But there’s nothing here that could even approach those classics. We probably hand it a 3.

Which makes you wonder: why? Why have QUByte unearthed two games that, as far as we’re aware, nobody had been clamouring for? These are inoffensive but creatively absent little shooters, and we would have been perfectly happy never playing them. They barely registered, and we’d guess that we’re going to forget them as soon as we press enter to send the review.

Unless you’re a shoot ’em up completist, there’s very little reason to pick up QUByte Classics: Thunderbolt Collection by PIKO. It feels like they’re getting splinters from dredging the bottom of the shooter barrel.

You can buy QUByte Classics: Thunderbolt Collection by PIKO from the Xbox Store