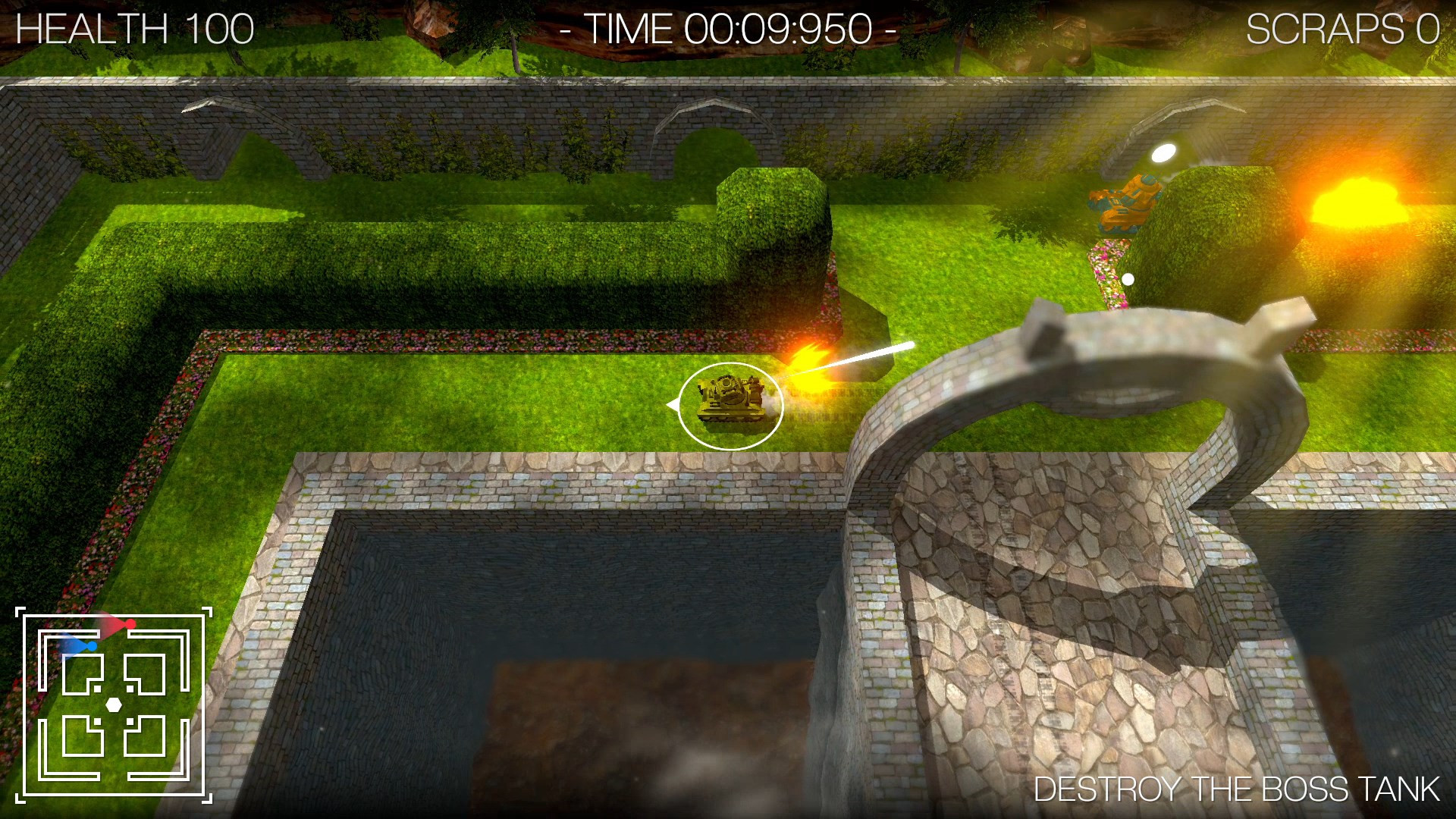 Way, way back in the mists of time, in my formative years as a gamer in fact, my proudest possession was a new (at that time) Atari VCS 2600 console. And on that console was a game called “Combat” which featured tiny tanks in mazes trying to shoot each other, with the ability to take on (and shoot) your younger brother, for example.

What has this got to do with this review, I hear you ask? Well, fast forward more years than I care to think about and we see Arenas of Tanks from Ratalaika Games rolling over the horizon, bringing with it the promise of more of the same action, albeit with the glaring omission of local competitive play, which seems like a really silly decision. Shall we survey the battlefield?

As you’d expect from a title from Ratalaika Games, one that features tiny tanks blasting seven barrels out of each other, the story is not a highlight. In fact, Arenas of Tanks doesn’t even try to give you a reason as to why toy tanks have suddenly become sentient and started fighting, they just have.

Presentation wise and again it is very much as you would expect from the Ratalaika stable. The graphics are small, not massively detailed, and the main difference between the tanks that you are fighting seems to be the colour, with not a massive amount of detail being lavished on the tank models. The action is viewed from an almost, but not quite, top-down perspective, and so while you can see what is happening most of the time, there are some walls in a variety of the mazes that can and will obstruct your view, making it just that little bit harder to see what is happening. The arenas themselves are quite varied, and range from a neon paradise – which is surprisingly hard to see the enemy tanks against – through to small garden mazes and another three that I shall leave as a surprise.

Sound is okay too, with gunfire and explosions never far away, and while I don’t have any issue with the way the audioscape is designed, it is crying out for some “heavy metal” music. See what I did there?

How about the way the Arenas of Tanks plays? Well, when you start you have a couple of choices in front of you. There is Challenge mode, and there is Arcade mode, and these both play out quite differently.

Starting with Arcade mode, you are tasked with spawning inside your tiny tank, and shooting anything that moves that isn’t on your team. Now, as you shoot enemy tanks, not only do you gain points (and in this game, points don’t make prizes, they make achievements, as a lot of them are tied to scoring a certain amount of points on each map), but you also gain scrap metal, which can be used in an in-game shop to get you certain advantages. You are able to buy extra health, extra armour, a reduced reload speed and more. For a significant investment of scrap, you can buy team mates to go alongside your titchy death machine. You can have a maximum of five AI teammates, and again, just screams as to how much Arenas of Tanks is crying out for some form of co-op play. With five maps to go at, there isn’t a massive amount of content in this mode, and to be honest, once you accumulate the requisite amount of points, will probably struggle to bother with the Arcade mode too much more.

Challenge mode is another beast altogether. It is set on the same five maps, each of which has a number (usually five) of challenges to complete. In a nice touch, these challenges are set against the clock, with medals of differing colours awarded for the amount of time it takes you you achieve the objective. Obviously, the less time it takes, the better, and here is where an element of score chasing comes in, all as you try to better your times. The challenges themselves are a varied bunch, and range from getting a certain amount of scrap metal (by blowing tanks up) to surviving waves of enemies with only 1HP, right up to taking out a boss tank. There is a lot more replayability in this mode, that’s for sure.

So what else do you need to know before you drop into Arenas of Tanks? Well, the aiming mechanic is weird, for one thing. Although this is a tank, with a turret that can rotate and theoretically fire in any direction, the actual aiming of the turret is not very well implemented. Your sight is just a dot, and while it is possible to shoot and aim, I found it much easier to leave the turret facing dead ahead, manoeuvring the tank so the cannon is in line; mostly as the sight is very tricky to see in the heat of battle.

Secondly, your own bullets can hurt you, as they appear to be made of rubber and bounce off walls they hit, usually straight back at you and through your frontal armour. Bouncing shots off walls is a sneaky way to get kills without exposing yourself to hostile fire, but bear in mind a wayward shell can end your run as effectively as the enemy fire. And thirdly, Arenas of Tanks is pretty short, and gives up its achievements very easily, as is to be expected of a Ratalaika title. This means that the long term play appeal is severely curtailed.

All in all, Arenas of Tanks is not a bad game. Arcade mode is slight and will be finished quickly, but Challenge mode comes with much more depth and does provide a modicum of replay value. This is not Ratalaika’s finest moment, but a long way from their worst.

Arenas of Tanks is on the Xbox Store