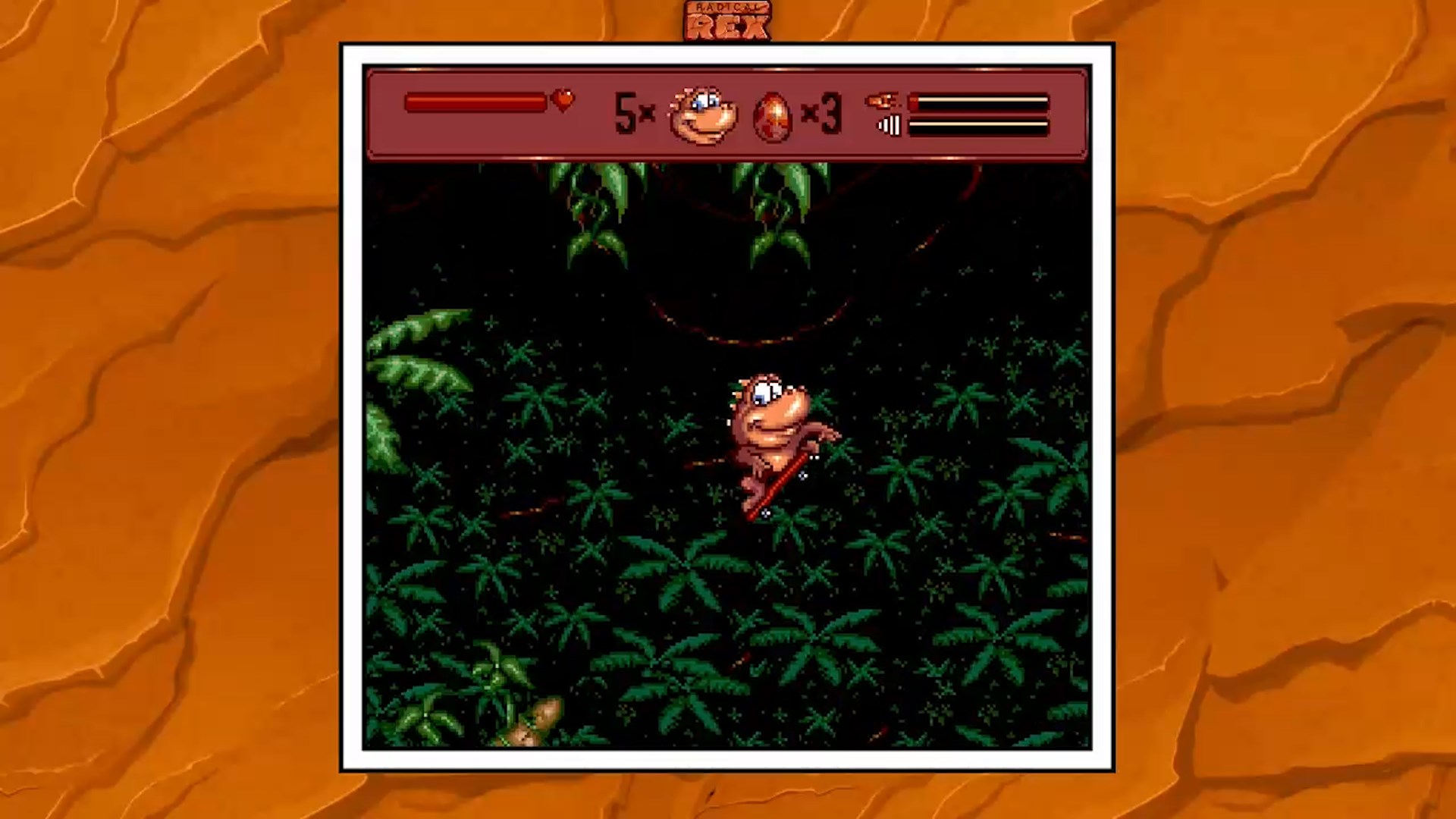 Who remembers the 1994 SNES classic Radical Rex? You know, the one with the fire-breathing, skateboard-riding Tyrannosaurus who must skate his way to save his own race? Of course you do! And now you can relive those fond memories in the year 2022, with Radical Rex making a return onto Xbox Series X|S, Xbox One and Switch today, the latest in a long line of QUByte Classics to hit modern consoles.

As with the vast majority of titles from the ‘90s, I’m afraid that there isn’t a whole lot of exposition or reasoning behind exactly why Radical Rex must skate through ten crazy levels, disposing of all manner of enemies with his fiery breath, but I’m sure an in-depth plot is really not what you are looking for here. It’s good old fashioned side-scrolling fun, seeing you venture across jungles, creepy caverns and even the internal system of a fellow dino in the aim of saving the world.

Along with his signature flame-throwing abilities, expect to be making use of a screen-shaking roar and some tasty kickflips in order to send those baddies back home. Such incredible moves can also be performed in the Portable version of the game, which has been faithfully recreated in all its monochromatic tones.

And, well, that’s pretty much all there is to the ported version of Radical Rex! Feel free to pick up a copy on Xbox Series X|S or Xbox One via the Xbox Store for £6.69, or alternatively on Switch, PS4, PS5 or PC – the latter has had Mr. Rex all to itself since 2019.

Stick around for a review from us soon.

Radical Rex is a fire-breathing Tyrannosaurus on a skateboard who has to save the dinosaur race. He’s the raddest, baddest fire-breathing Tyrannosaurus ever to shred prehistoric pavement! This bad-boy-on-wheels is out to save the dinosaur race. Check Rex thrashin’ on his board, sportin’ his flame-breath, bustin’ out with killer jump-kicks, swingin’ on vines and blastin’ out screen-shaking roars. Excellent! Slam through ten wild levels of jammin’ jungles, freaked-out forests, haunted dino-graveyards, piranha-infested underwater caverns – and inside a giant dinosaur! Rex keeps you groovin’ while you keep him movin’ past twenty of the meanest prehistoric nasties to rock his dino-world. No sweet for Rex – ‘cuz he’s too hip to be extinct!