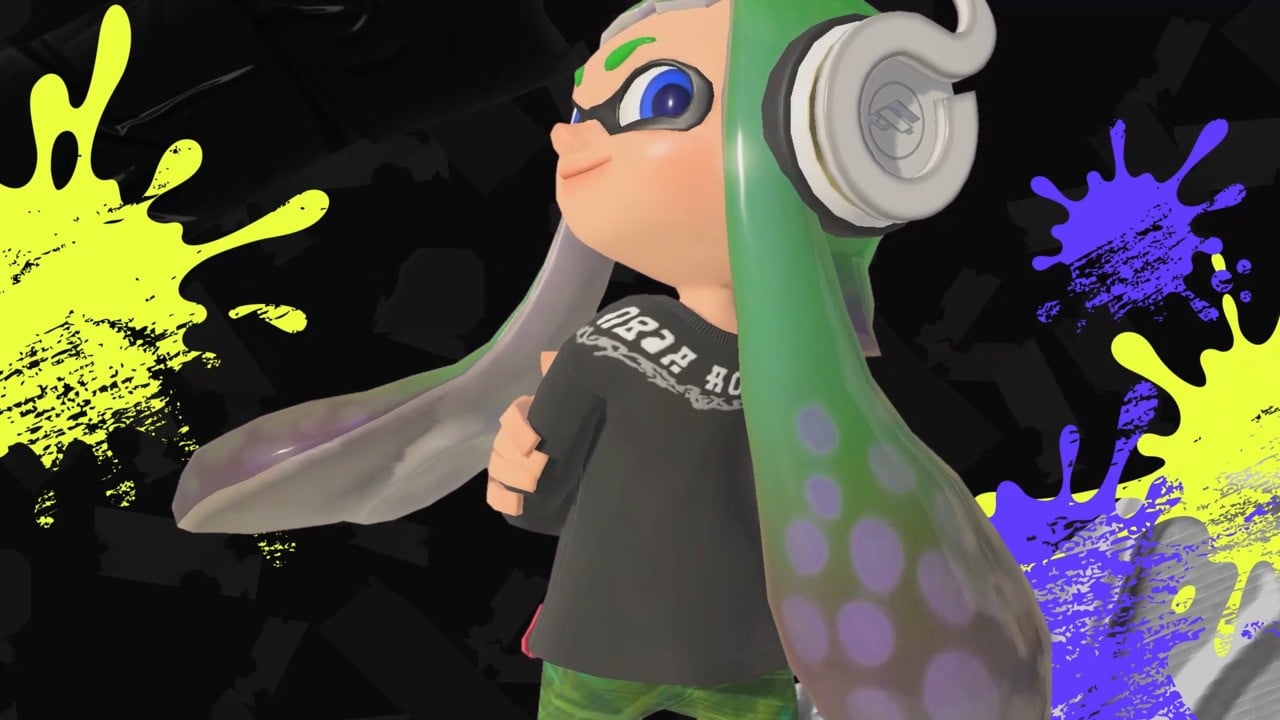 It happened almost overnight. One day in May 2015, Splatoon merch appeared everywhere in Japan.

Baby inklings dangled from kids’ backpacks. Squid-girl stickers adorned pencil cases. Convenience stores advertised raffles for figurines, coffee cups, and Splatoon-branded bags. This explosion of Splat-swag was perhaps more of a surprise given that the Wii U sold only 3.3 million units in Japan. Lifetime worldwide sales of Nintendo EAD’s first ink-based team shooter would come to rest at 4.95 million units, a very respectable figure — especially for brand-new IP — but hardly an indicator of the utter phenomenon the franchise would become in Nintendo’s homeland.

The release of the far more successful Nintendo Switch and the debut of Splatoon 2 saw the series transmute into a household name. And now with Splatoon 3 becoming not only the fastest-selling Switch game in Japan, but the country’s fastest-selling video game, full stop (beating the previous record-holder, Pokémon Black & White), the series has cemented itself as a cultural touchstone for a generation of Japanese gamers.

How, exactly, did Splatoon reach heights rivalled only by Pokémon in Japan? New IPs from the House of Mario appear as often as shiny Pocket Monsters, yet typically move comparatively mediocre numbers or fall into relative obscurity behind the premium marques of Mario, Animal Crossing, Zelda, and Pokémon. Take Pikmin and ARMS, for example, which we adore but struggle to compete with the tentpole franchises when it comes to sales numbers or mainstream mindshare.

So, again, how has Splatoon risen to become one of Nintendo’s most important series in Japan? To get to the bottom of this anomaly, we spoke to three Japanese Splatoon players (and former/current students of this article’s author) to try and learn why squid-on-octopus ink-based action appeals to them so much.

“The easy-to-understand rules are the secret to Splatoon’s appeal,” says Sota Ishikawa, a series veteran that has played regularly since the original. He’s currently a first-year university student and primarily plays Turf War with friends.

In a world of competitive shooters with steeper learning curves such as Fortnite (in build mode, at least) and Apex Legends, Splatoon exists almost as an antithesis. “There’s many reasons why I think Splatoon is more interesting than other shooters,” Ishikawa continues. “It’s easier to play [than other online shooters] because players improve quickly with uncomplicated controls and rules.”

Where other competitive shooters require a high degree of knowledge and practice to compete in, Splatoon gives something for every player to do regardless of skill: inking everything in sight. “My father is good at splatting opponents,” Taro Yamada (a pseudonym) tells us after showing off his impressive collection of Splatoon 3 stickers. He’s currently a second-year junior high school student who came to the series with the first sequel on Switch. “I’m better at inking. We win a lot of matches by working together.” The father-son pair often play after Yamada finishes juku (cram school), him on his Switch Lite and his father on the living room TV.

Splatoon is a low Time-To-Fun franchise

Chihiro Kawakami, another university student who hopped on the ink train with the recent third iteration, added that she thinks the variety of weapons greatly adds to Splatoon’s appeal. In Splatoon 3, there are now over 50 main weapons with a variety of sub-weapons.

“There are so many different weapon types that there’s a perfect choice for everyone,” she says. Want to go hard with the Z-Zap ‘85 or keep it simple with the Splattershot? Maybe something a bit more hectic like the Sloshing Machine? Splatoon has something for everyone, regardless of playstyle or ability. Kawakami herself found the Splat Roller easiest to use.

Of course, these anecdotal experiences can’t account entirely for Splatoon 3 outselling both Animal Crossing: New Horizons and Pokémon Sword and Shield in its launch period, but they highlight a key point that perhaps sets Splatoon apart from both popular team shooters and other huge games: the lower time investment needed to get to the ‘fun’. Yep, Splatoon is a low Time-To-Fun franchise.

A typical student in Japan generally finishes class around 4 pm before attending club activities for a few more hours. Then, it’s off to juku to study and finish homework before arriving home as late as 9 pm. Part-time jobs and university clubs overburden university students in a similar way. For adults, work-life balance is a foreign concept, though they’re working on it. This leaves little time to invest in a game with a steep learning curve or without options to play how you like.

This ease of play isn’t unique to Splatoon. For example, the plentiful Moons in Mario Odyssey and the shrines and Korok seeds in The Legend of Zelda: Breath of the Wild lent themselves to short, convenient play sessions. For the Switch, it’s all part of Nintendo’s first-party playbook. Splatoon happened to grab its Japanese audience even better. Turf War matches take up only three minutes, after all.

Japan hardly has a monopoly on time pressures, though, and we can’t discount the massive marketing push Nintendo has made in its homeland compared to the rest of the world.

From the very beginning, Nintendo threw its weight behind marketing the series. Right now, merch for Splatoon 3 is everywhere.

From the very beginning, Nintendo threw its weight behind marketing the series. Right now, merch for Splatoon 3 is everywhere. Displays in just about every 7-Eleven convenience store in the country – of which there are over 20,000 – promise prizes from entering Splatoon raffles. Yes, even tiny stores situated in rural train stations.

Splatoon-flavoured ice cream is available at Baskin Robbins (though we’ve yet to try it — after eating all those Pokémon donuts, we’re watching our weight), and kid-focused 30-second ads frequently run during the National Broadcasting Corporation’s commercial breaks.

“Recently, there’s a lottery I want to enter,” Ishikawa said when asked if he’s bought any Splatoon merch. He sent us a link, which we’ve embedded below. Prizes include – and we’re not kidding – a Splatoon alarm clock or soap dispenser:

Kawakami expressed interest in some Splatoon-based candy that convenience stores are selling, but it’s the younger Yamada that has truly taken a liking to all things Splatoon. Yamada reminds us of ourselves when Pokémon first hooked us back in 1997; we had T-shirts, pencil cases, notebooks, and more all branded with Pikachu and Charmander.

Likewise, Yamada has covered his school iPad’s case with Splatoon 3 stickers and changed his background to match. A small plush of Little Buddy hangs from a strap on his backpack, too. And Yamada isn’t the only one. In any given Japanese classroom, it isn’t difficult to find some form of Splatoon merch – there’s far more of it than of comparable Nintendo franchises and absurdly popular K-pop idols. At lunchtime during the release week of Splatoon 3, a request to play Spicy Calamari Inkantation over the PA at Yamada’s school was granted.

In the deep end

Obviously, there’s something at work here that keeps giving gamers something back the more they invest in the game and its world.

According to an Iwata Asks interview, the development team spent ten months just adding “depth” to the game, which began life as a prototype with a tofu-looking white cube shooting black ink over a maze. This lump of tofu would evolve into a rabbit, and finally into anthropomorphic squids. 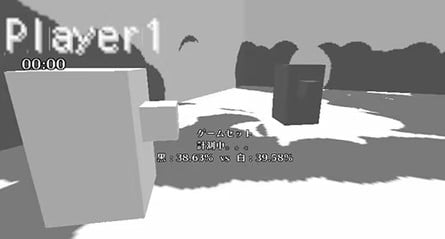 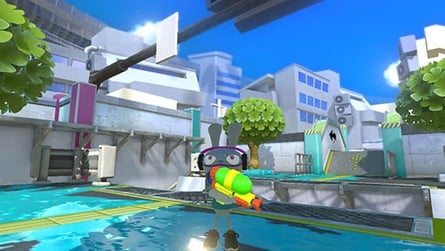 “Because of how it looks, some people might think ‘Does this game have any depth?’ but they shouldn’t worry,” said co-director Yusuke Amano. “The game gives a lot back to a player who wants to get invested in it.”

Later on, speaking with Satoru Iwata, producer Hisashi Nogami (of Animal Crossing fame) detailed how this depth — not only in the gameplay but also in the team’s thought processes — helped create a squad-based shooter that felt like much more than simply Nintendo’s take on a well-established genre:

Nogami: We were really lucky this time to have a lot of people on the team who are really deep thinkers. Even if we got stuck in the middle of development, somebody would put out an idea, and that would help us all move forward as everyone got together to refine it […] that happened over and over again. It may sound like I’m blowing our own horn here, but I think we were really able to take things to a higher level on this project.

Iwata: I completely understand that. You were able to create a game that was unlike any other game in the world, because you had several people on the team who were really deep thinkers. This isn’t something like, “This is what XX looks like when Nintendo makes it,” this is something completely new.

It’s certainly true that despite having many trappings genre veterans will find familiar, Splatoon truly stands apart from other team-shooters vying for players’ attention, games which are often tantalisingly free-to-play — which you might think would be a huge draw for younger players with limited gaming budgets.

Sheer (fresh) style is a factor, of course. Splatoon’s vibrant, graffiti-daubed world and gentle cartoon counterculture is punctuated by unmistakable audio which takes centre stage, with in-universe bands and idols worshipped in-game and out. Real-world concerts draw crowds of uberfans, with K.K. Slider relegated to the support slot.

Much like its gameplay, Splatoon’s soundtrack blends genres and global influences with abandon, but the music comes out sounding utterly unique; a fusion of percussive vocoder-laced techno-punk rock that sounds, on occasion, like someone drowned a Crazy Frog and blended it with Blondie. In a good way.

Add the game’s creative attitude and music into the mix, and you start to see why it’s struck such a chord.

Hangin’ with the big hitters

Plenty of Japanese gamers play Fortnite and Apex Legends, of course, but Splatoon has tapped a cultural vein in a way only the biggest cultural phenomena can. It’s created a youth craze where other new Nintendo franchises have generated merely a pleasant, measured buzz, and built upon its approachable, accessible gameplay to cultivate a legacy with both Japanese kids and young adults.

…demand for Splatoon 3 in its first three days on sale outstripped Nintendo’s longest-running, most-established franchises…for such a young series to have joined the highest echelons of Nintendo IP is an incredible feat

It’s not as if we can’t understand why. We adore the series, too — we awarded the latest entry a 9/10, after all — but it’s nonetheless mightily impressive, and a little perplexing, to see Splatoon 3 become the fastest-selling video game in Japan.

Think about that for a second; demand for Splatoon 3 in its first three days on sale outstripped Nintendo’s (and anybody else’s) longest-running, most-established franchises. Sure, the Switch install base is orders of magnitude greater now than it was when Breath of the Wild and Super Mario Odyssey launched back in 2017, and perhaps we’ll see similar numbers when Tears of the Kingdom launches next year. Regardless, having such a young series join the highest echelons of Nintendo’s IPs is an incredible feat, and with regular Splatfests and “large-scale” DLC on the way, it seems like there will be plenty for Splat-fans — Japanese and otherwise — to enjoy on Switch and beyond.

Whether or not Ishikawa and Kawamaki continue to play successive Splatoon games as they make their way through university and into young adulthood neither we nor they could say, but we’d bet ink-stained cash that Yamada and his father will be first in line to buy a Splatoon 4. After all, with unprecedented sales not seen since the heydays of Dragon Quest and Pokémon, no series in recent memory has infiltrated the lives of Japanese youth — much like an Inkling equipped with Ninja Squid — better than Splatoon.