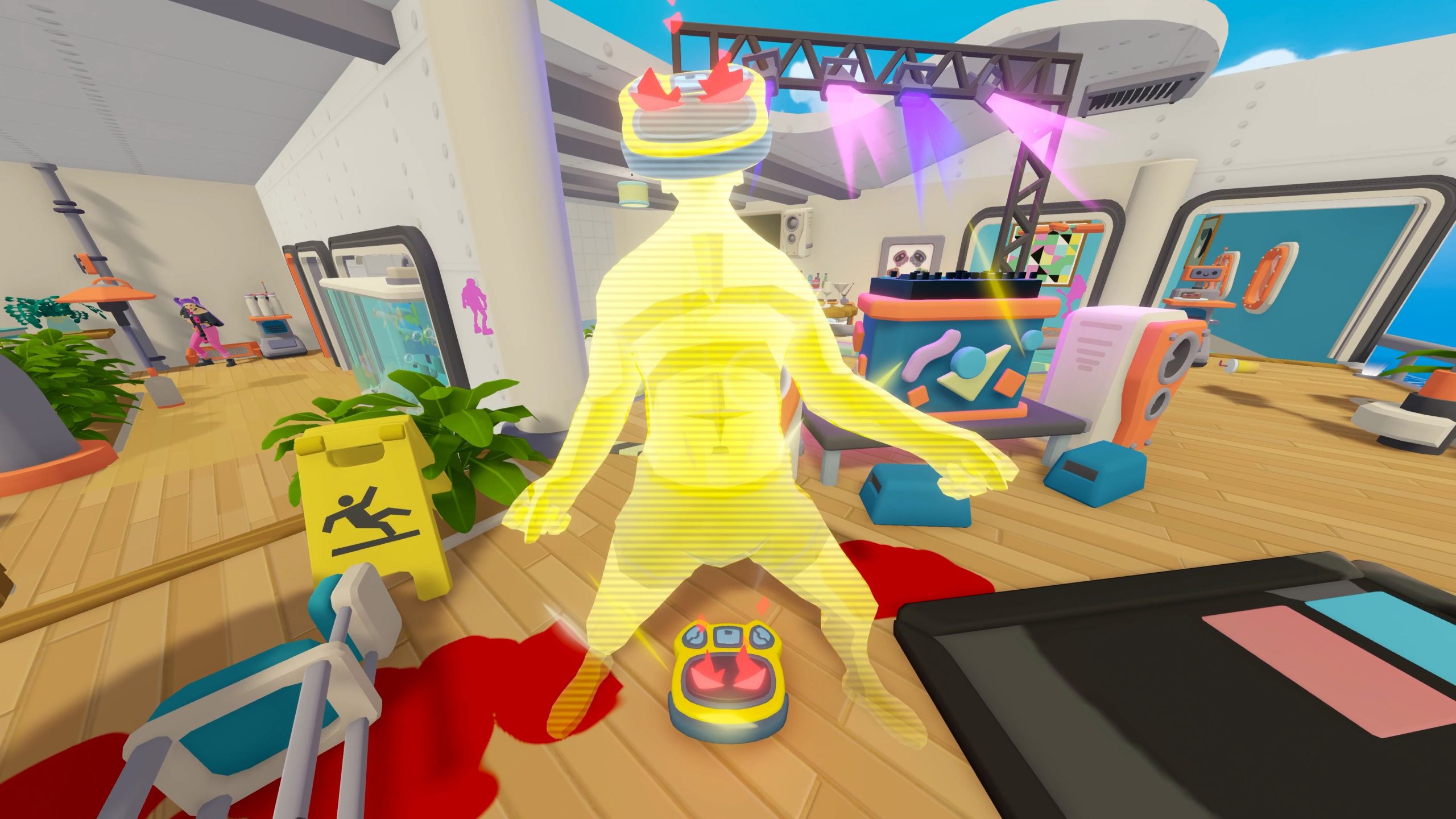 Back in 2021 I happened upon a charming little game which featured Roombo, a territorial and rather ruthless robotic vacuum cleaner. I really enjoyed my time with the game whilst it lasted, but was left wondering how and when Roombo would return. I’m delighted to say that Justice Sucks: Tactical Vacuum Action is here to fill that household appliance shaped void.

Nowadays the little scamp goes by the name of Dusty McClean, and has had something of an upgrade. Justice Sucks begins in a very similar way to the previous adventure, raising an eyebrow as to whether it was cutting a few corners. However, this time Dusty’s defensive actions attract the attention of FamilyCorp’s warranty squad, and after a scuffle he is chucked into the TV and a digital realm inspired by the 1990s.

The story follows Dusty’s efforts to save his family from the evil FamilyCorp. You’ll get to play across several different worlds such as a cruise ship, nightclub and even FamilyCorp HQ itself. Each location has one single map, but there are various missions available to play, each with their own differing objectives.

There are a fair few scenarios to beat, which range from bomb defusal and parcel delivery to simply eliminating all enemies. There are several elements of your performance that will ultimately decide your rank, and more importantly your score.

Dusty moves around like an everyday vacuum and is able to take cover under tables, sofas and the like, as well as make use of air vents. When he does so, enemies will be unable to see him and this stealth element to the game is just as important as going on the offensive. This is because Dusty is pretty fragile, and can only take a few hits before he breaks. Each bad guy has a vision cone to help you stay out of sight, and decide which approach is best to achieve your objectives and survive the mission.

I had the most fun with Dusty’s hack ability. This allows him to slow down time, and turn everyday household objects into implements of death and destruction. He can also ping them to draw enemies close for maximum damage. Whether it’s bringing down fans, springing window frames across a room or even freezing enemies solid; there are lots of inventive ways to teach them a lesson.

As you can imagine, Dusty makes quite the mess in the process. Your unfortunate victims will quite literally explode into pieces, leaving a trail of blood and guts in Dusty’s wake. He wouldn’t be a very good vacuum if he didn’t clean up after himself. As much as his insatiable bloodlust powers him, he is committed to tidying up afterwards. Every cloud.

Dusty can also suck items (and animals) up and then fire them like a highly charged rifle round. Items have a range of effects, and your organic allies will dispatch targets in their own unique way. Experimenting with these, like with so many elements of Justice Sucks, is a huge amount of fun. There’s much here to reward curious players.

Completing missions will unlock new abilities and perks as well as levelling up Dusty in the process. There are all sorts of inventive skills to earn, and this doesn’t end once you complete the main story. A few of my favourites include deploying balloons to float above danger, leaving proximity mines to blow away enemies and unleashing Dusty’s fighting spirit Sexy McClean and his devastating “Sexy Vortex” move. It has to be seen to be believed.

You can also load up the map at any time to get the lie of the land, and see where enemies and key items are located. This is especially handy when you are against the clock, however even without the map you’ll learn your way around the various environments pretty quickly.

The gameplay in Justice Sucks features short, sharp rounds of play which are so, so much fun. Each level feels like a playground, allowing players to choose how they go about their business. This, combined with the addition of online leaderboards, means there is plenty of replayability on offer here. As you unlock different abilities, Justice Sucks is designed in such a way that allows you to make use of certain combinations to improve your time and climb to leaderboard infamy.

Justice Sucks has style and attitude running through it like a core strand of DNA. I absolutely love how this game looks and sounds, as well as finding it laugh out loud funny in parts. I mean, Sexy McClean is a whole other level of ridiculousness.

But whether it’s firing a cat toward a baddie and watching it scratch them to bits, or using a stupidly powerful ram move to obliterate an enemy, Justice Sucks is packed with nuanced moments which make this game a real treat to play.

And Dusty is just adorable. His little digital eyes show his intentions and emotions, such as closing one when aiming to take a shot, or having them burn bright as his blood lust rages. As a videogame hero he really deserves to endure because he’s got a personality all of his own. His simple but intelligent design is really impressive, so much so I’m considering giving my robot vacuum at home a makeover in his honour.

Justice Sucks also boasts a brilliant soundtrack which just adds to how ludicrous the whole thing is. One mission has you focused only on cleaning up human remains, but Dusty has his own cleaning theme song playing in the background which is nothing short of a stroke of genius.

I’m a big fan of Justice Sucks as you have probably gathered. However, what would make it even more awesome is the addition of multiplayer. Imagine teaming up to lay waste to waves of pesky bad guys, or going head to head online, setting traps for other players and waiting with bated breath as they unwittingly stumble into them. Make it happen please Samurai Punk!

At £16.74 Justice Sucks may seem a tad expensive, but it’s one of those unique experiences that makes it all worth it. Not only is the gameplay tight, but its wonderfully absurd roster of characters and off-the-wall style all come together to result in something rather special. I think the creativity involved with Justice Sucks is the main reason why it provided me with so much joy.

I seem to have found myself playing a fair few games from the talented folks at Samurai Punk and have enjoyed every single one of them – but none more than Justice Sucks. It feels fitting to sign off in the same way as last time by simply saying, I can’t wait to see what they come up with next.

Justice Sucks: Tactical Vacuum Action is a refreshingly original title that strikes a brilliant balance for players, offering an experience that is accessible, addictive and – above all else – an astounding amount of fun.

Justice Sucks: Tactical Vacuum Action is on the Xbox Store