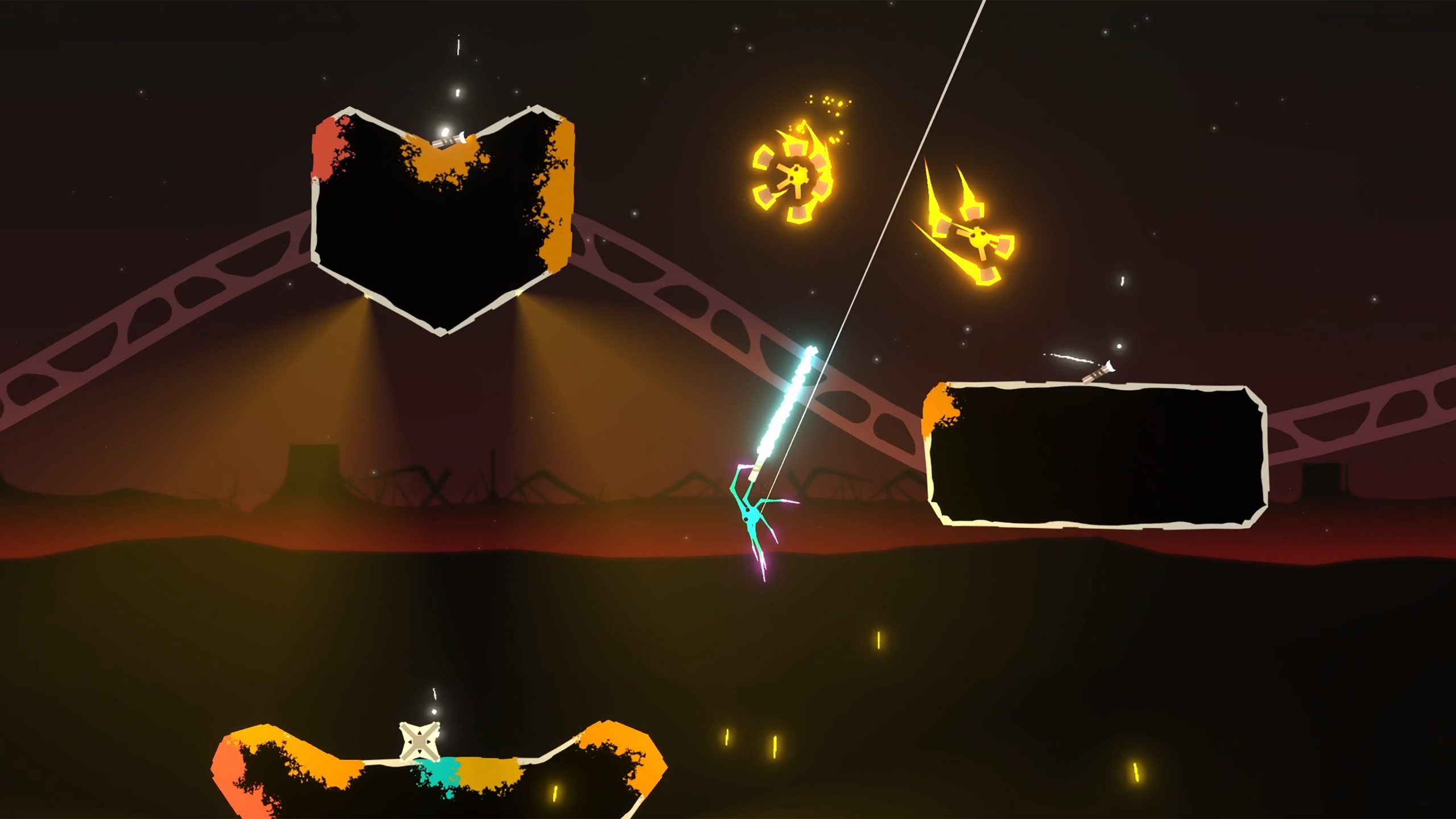 As unique selling points go, this is a pretty memorable one. SpiderHeck is here to offer you the opportunity to do battle against other arachnids with a variety of weapons across numerous gravity bending arenas. At first glance, it’s rather ridiculous, but incredibly intriguing at the same time.

Your only option, of course, is to play as a spider but you can customise your little critter by equipping different skins and adorable hats such as a traffic cone. There are achievements to unlock as you play, which in turn will expand your wardrobe.

As you can probably guess, web slinging is how you get around in SpiderHeck. You’ll need to attach to a solid surface to safely make the jump, and avoid the luminous death zones which more often than not surround the edges of the arena.

Whilst scuttling around and avoiding enemies, you can use one of your many legs to pick up a variety of weapons to defend yourself with. Lasers, shotguns and even crossbows are up for grabs, each handling in their own unique way. The physics are pretty wild in SpiderHeck, which makes the gameplay unpredictable to say the least.

There are numerous ways to play, each being a variant on the fast paced, frantic melee style action. It’s a game which feels very much geared towards multiplayer, however there are single player options too. The main way to play solo is jumping into Tiers of Heck, which is basically a challenge mode.

Here you are presented with numerous scenarios where waves of enemies will spawn, and you will only have access to a specific weapon with which to eliminate them all with. To make things even more challenging, the arena is specifically chosen to dial up the difficulty.

For example, one level consists simply of platforms hanging by wires which will violently swing with the slightest movement. The only weapons available to you are mines, which – as you can imagine – will only make life more challenging for you. Another forces you to use RPGs only, which look delightfully absurd but are wildly impractical as your enemies buzz around in the air seemingly avoiding every shot.

Some of the weapons work much better than others in SpiderHeck. If you’re wielding a shotgun, or even a laser sword, swatting flies or taking down other insects is pretty manageable. However, try that with the weapons mentioned before, and it becomes a different beast. As Tiers of Heck forces you to play only with these on certain levels, this is where things get very frustrating.

Small details, such as weapons spawning in front of you, blocking your explosive round and blowing you up become irritating. At times during the madness, you certainly do feel like a spider as it swirls around the plughole watching events unfold around it, but having little to no control to make any sort of impact before meeting its inevitable doom. At its worst, this is how SpiderHeck can feel and it quickly becomes unappealing. I was certainly uttering a fair few four letter words, but “heck” wasn’t one of them.

Variety remedies this issue, and thankfully it features in the other game modes in SpiderHeck. Wave Survival does pretty much what it says on the tin; you’ll face increasingly difficult and numerous rounds of nasties, starting with three lives. You can replenish these by progressing and after every few rounds you will have a choice to make between three different arenas featuring attached conditions such as reduced recoil from weapons, for example.

You can get your mates to join you locally, head online to matchmake or strike a mixture of both. However, friendly fire is very much on so you can guarantee there’ll be some accidents along the way. If you wish, SpiderHeck offers the possibility to tackle the enemy waves solo and see how far you can get.

If you prefer competitive play, then Versus Mode has you covered. This mode pits you against up to three other players to fight it out as the last spider standing. You have much more control over the variables here though, such as the ability to toggle weapons, arenas and modifiers on or off.

There is a quick play option, which tries to matchmake you to either of the multiplayer modes at random. However, it feels a little redundant as it takes no time at all to set up a game, and there are only two modes to choose from anyway.

I enjoyed myself much more when playing SpiderHeck with others, and having a variety of weapons and ever-changing arenas to battle in. There’s no denying that the premise is unique and alluring, which kept me playing for longer than I may have initially expected. It’s also a game that I can easily see myself going back to and booting up for short sessions to burn a quick half hour or so.

That said, SpiderHeck certainly has more legs, especially with the launch on Xbox Game Pass attracting attention from players. Here’s hoping there’s more to come in the near future.

SpiderHeck is an eye-catching oddity that is best played with others. As arcade brawlers go, there isn’t anything else quite like it.

SpiderHeck is available from the Xbox Store