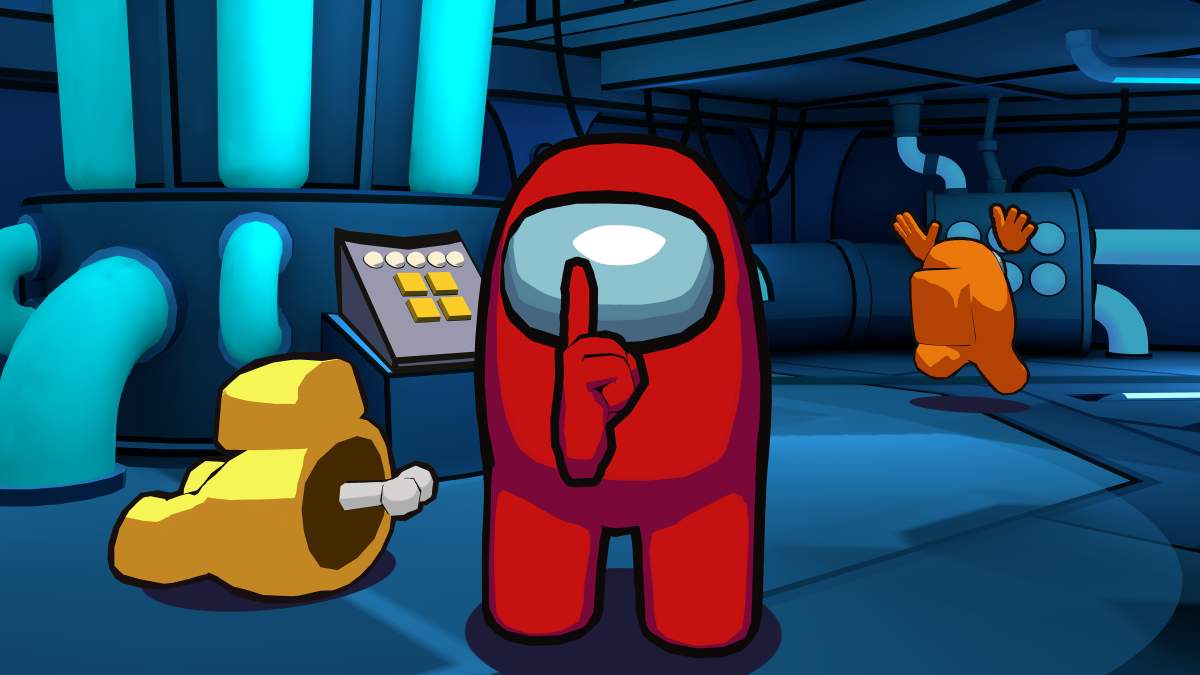 In space, no one can hear you scream, but everyone aboard the Skeld 2 probably can when you’re brutally murdered by an Impostor in Among Us VR.

While Innersloth, Schell Games, and Robot Teddy’s reimagining of the hit game doesn’t reinvent the wheel, Among Us VR doesn’t need to. Instead, the shift to immersive 3D gameplay and the addition of voice chat give this game a simultaneously fresh and familiar feel, with the changes accentuating the original’s best features.

Voice chat puts the social in social deduction, while the removal of the original’s top-down view (changing it to first-person) fills you with a near-constant fear that an Impostor might be sneaking up behind you.

My hour-long demo of the game passed by in a flash because of how much fun I was having, and I can’t wait to play more now that it’s finally out on the Oculus Quest 2, Meta Quest Pro, and Steam VR.

Just like in the original, Among Us VR players are split into two teams when they start a game: Crewmates and Impostors. As a Crewmate, your goal is to finish your tasks and to vote out the Impostors hiding among… (don’t say it…) them on the Skeld 2 – your spaceship.

The Skeld 2 is a fairly large and capable craft, but it requires a lot of maintenance to keep it flying. These repair minigames are spread out across the ship and force players to split up (which is frightening when you know you’re being hunted), and if everyone finishes their tasks the Crew win.

As far as I can tell, every task from the original game’s Skeld appears in Among Us VR. Some, like the Medbay scan and download tasks, are as simple as they are on PC and mobile – you just push a button and wait – while others, like plotting the ship’s course in Navigation and refueling the engines, are much more interactive; you need to actually fly the ship with the steering wheel and physically pump the fuel to where it’s needed. There are a couple of new tasks, too, though I only got to experience one during the demo: reaction time – a whack-a-mole style game hidden in Medbay.

Another change in VR is that you’re free to look around you while on a task. Because of this, I feel like I spent much longer completing each objective than normal. I couldn’t escape the feeling an Impostor was standing right behind me, so every few seconds, I’d turn around just to be sure I was safe. This tactic definitely worked, as the one time I bravely tried to focus on a task I was struck down – and I let out a loud scream that had my girlfriend rushing to check on me.

Impostors aren’t concerned about the Skeld 2 or its crew. Rather than completing tasks, they roam the ship’s corridors and eliminate Crewmates when the time is right (read: when their kill cooldown is up).

To help them complete this objective, Impostors can set off sabotages –. nuisances that are designed to bamboozle the Crewmates. As an Impostor, you can close doors to trap players in specific rooms, turn off the lights so you can sneakily kill in the dark, and sabotage the Skeld’s reactor or oxygen supply to force players into one part of the ship – as if they don’t fix either before a time limit expires, all the Crewmates die.

In my Impostor round, I believed I was an absolute genius when I used the Oxygen sabotage to help me hide two bodies in the ship’s reactor room. I planned to go and fix my own problem to help sell my innocence, and maybe I’d pretend to stumble across my victims with a self-report after. But I had to go and ruin everything by accidentally chopping a Crewmate in half in front of another player. Rookie error.

Not wanting to be forced out of the airlock like my partner Red had been, I turned to the last trick in the Impostor playbook: boldface lying.

“Blue just sliced Yellow in half right in front of me,” I blurted out before Blue could react, “It must’ve been a misclick as we were all in O2 together.” Blue tried (unsuccessfully) to pull a “No, u” on me, but the damage was done. I used my knowledge of the game’s tasks – something an Impostor couldn’t possibly know because they can’t play them – to convince Brown I was an innocent bean. They voted with me, and like that, I had snatched victory from the jaws of defeat.

While this was a particularly dynamic meeting, with Blue and I begging Brown to side with us, every meeting had way more energy than any I’d experienced in text-based Among Us. Being able to talk with the other players and emote with wild hand gestures made this party game feel like a party.

Even outside of meetings, it was nice to be able to chat with other players while we completed tasks together. Thanks to these interactions, I felt like we were a team on the Skeld rather than a gaggle of independent folks only interested in ourselves.

As much as I adored Among Us VR it’s got problems. Beyond the movement being a tad clunky and a couple of minor bugs (thankfully with workarounds (opens in new tab)), I wish the development teams had included one feature that is coming to the original: alternate game modes.

Hide and Seek is a player-made mode created by tweaking Among Us’ settings – the Impostors are given barely any vision but a short kill cooldown and Crew are given only a few tasks to complete – and it’ll be coming as an official alternate mode for the original game sometime in the near future. Because you can’t tweak the match settings in Among Us VR, I’d have really liked it if hide and seek and maybe another alternate game mode could have been included at launch as a way to mix things up from time to time (hopefully, they’ll get added in a future update).

Yet, despite my gripes Among Us VR is no less of a blast to play. If you own a VR headset, this is a must-play title – especially if you have friends that also have their own Quest 2, Valve Index, or another supported headset.