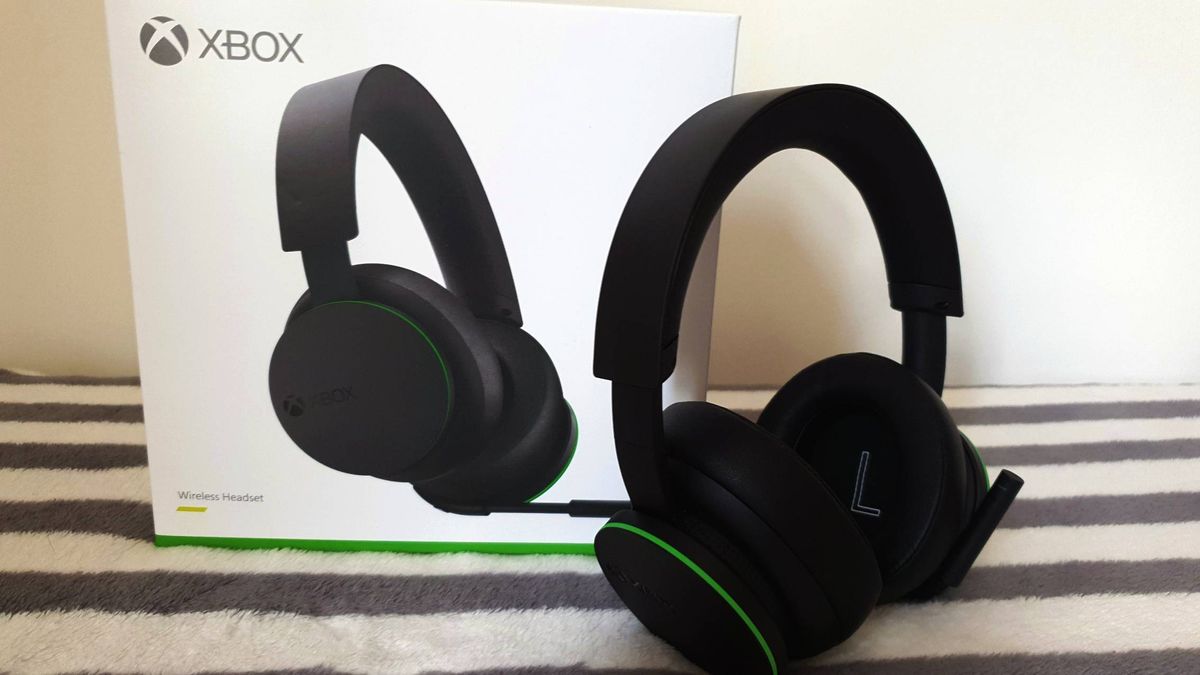 The Xbox Wireless Headset is a sensational option from Microsoft that’s a must-buy for any Xbox gamer. Boasting a flawless wireless connection, that’s backed up by seriously impressive audio and significant quality of life features.

We’d normally expect to pay triple the price to experience this sort of sound quality, particularly from a wireless headset, though there is a caveat you need to bear in mind. To get the most out of these headphones, we found that you’ll need to spend time tweaking the EQ in the Xbox Accessories app to dial in exactly how you want them to sound. That’s a good thing, though, as everyone hears sound differently and has preferences when it comes to bass, mids, and highs.

And with Black Friday 2022 almost upon us on November 25, it’s likely we’ll see discounts for the Xbox Wireless Headset. If you’ve been after a new pair of cans, know that deals for the headset will likely be among the best Black Friday Xbox deals, so be sure to keep our hubs bookmarked.

The overall design of the headset is also superb, with a premium feel that completely belies the cheaper price point Microsoft has managed to achieve. Simply put, if you’re in the market for a wireless gaming headset to go with your new Xbox Series X or Xbox Series S console, or even if you’re a PC gamer, the Xbox Wireless Headset is as good as it gets.

It’s competitively priced for a wireless headset, and undercuts the likes of the SteelSeries Arctis 9x while offering the same desirable features like Bluetooth support and a top quality microphone. Compared to that and other more expensive headsets, like the Fnatic React Plus, you’d be hard-pressed to justify other premium options.

Microsoft’s Xbox Wireless Headset mirrors the design language of the Xbox Series X to an impressive degree. The all-black design is embellished with tasteful touches, such as the thin green rings that surround the outside of each earcup and the embossed Xbox logo on the right-hand side. The inside of the earcups, which are handily marked with large ‘L’ and ‘R’ letters, also have a faint green hue that seeps through the mesh, as the driver’s are also coated in Xbox’s familiar brand color.

Powering up the headset, which is done by pressing the light green power button located on the left-hand side, greets you with the familiar Xbox Series X boot up sound. You also get audio cues that Xbox owners will immediately recognise when you power them down, mute the microphone or pair the headset, too.

Adjusting volume or balancing game and voice chat is nothing short of a pleasure on the Xbox Wireless Headset thanks to the rubberized dials that we’ve seen in another of Microsoft’s audio products, the Microsoft Surface Headphones. You simply turn either the left or right rubberized earcup dial to adjust the volume or chat to your liking, and it’s super easy to make incremental adjustments.

Despite being a mostly plastic design, the Xbox Wireless Headset feels built to last and the materials used convey a real premium feel that belies the $100 price tag Microsoft has somehow managed to hit. The Xbox Wireless Headset wasn’t prone to any creaking during our testing, and the overall clamping force was more than reasonable to ensure a comfortable fit.

At 312g, the headset is also light enough that you won’t feel it weighing down on your head after hours of play. You can also comfortably crank up the volume with room to spare thanks to the headset’s 32 Ohm impedance, and the speaker response of 20Hz – 20kHz should mean no audio details you’ve come to expect in your go-to games are missed.

While it won’t impact everyone, one slight we do have against the Xbox Wireless Headset, is that the ear cups could be a touch too small for those with larger heads and ears. They’re not uncomfortable by any means – the oval ear cushions are made of polyurethane leather and have foam cushioning, but we did notice that this reviewer’s particularly large ears would feel a little tender after a few hours.

When we first put the Xbox Wireless Headset on, we were impressed and concerned in equal measure by how bass-heavy the sound signature was. If you’re someone who loves nothing more than a hard thumping bassline, the Xbox Wireless Headset won’t disappoint. It provides truly incredible bass reproduction – and there were times when we felt as though we had our ears pressed up against a DJ’s subwoofer.

Seriously, these are superb at delivering that low-end sound that so many people crave and enjoy. There’s even a bass boost option that goes up to +12, which honestly, seems downright excessive considering just how low these headphones can go.

But while that’s all well and good, having a purely bass-driven pair of headphones isn’t ideal when you’re playing competitive shooters or even more cinematic single-player experiences. Too much bass can overpower and muddy the other frequencies that are equally as important, leaving you with a muffled sound that won’t do you any favors in online multiplayer games.

Thankfully, Microsoft has designed the Xbox Wireless Headset to suit everyone as you can customize the sound to your liking. If you head into the Xbox Accessories app you can pick from a selection of equalizers that include Game, Movie, Music and Speech. And while neither of those were quite right for this reviewer, there’s also an option to customize six EQ levels to your liking. It’s here where the Xbox Wireless Headset truly comes into its own.

We’re used to a flatter soundstage overall, so headed to the Xbox Accessories app to dial back the bass to a point where it could still provide a satisfying thud, but not cannibalize every other frequency as a result. We also wanted to be able to hear voices slightly clearer. After some careful tweaking over our testing, we ended up with a sound signature that ticked every box and sounded amazing no matter what we’re doing: be it listening to music, playing our favorite games or simply watching videos on YouTube.

These cans also sound wonderful when using spatial audio such as Windows Sonic and Dolby Atmos. If you don’t own Dolby Atmos, simply connecting the Xbox Wireless Headset will give you six months access for free, so there’s no excuse not to experiment with the wonders of spatial audio. Despite being a closed back pair of headphones with great noise isolation, we were pleased by how clear and detailed the best Dolby Atmos Xbox Series X games sounded. The sound never felt too closed off, with a wide enough soundstage to provide a convincing 360-degree audio effect.

We can’t understate how engrossing the audio quality is on these headphones once you’ve played around with the EQ settings. It’s astonishing to think that you can get this type of audio performance for less than $100, and Microsoft deserves a great deal of credit for including a pair of 40mm drivers that are so responsive to changes from the user. EQs aren’t new after all, but we’ve often found that some headsets can’t really be tweaked to produce positive results, no matter how much we fiddle with certain levels. The Xbox Wireless Headset, in comparison, are extremely malleable in this regard, and it pays off in a big way.

Good audio will always be subjective due to the nature of our ears, age, and ability to hear certain frequencies. It’s a relief then that Microsoft didn’t take a “one sound suits all” type of sound that some manufacturers opt for and gave us an incredible foundation to discover what sounds best. The Xbox Wireless Headset can receive future improvements thanks to its ability to receive over the air updates.

Microsoft’s wireless headset not only nails the audio quality and microphone, but it comes with some desirable features that are usually reserved for higher end headphones. Mic monitoring can be turned on to help you hear your own voice clearer when you’re communicating, though it isn’t as loud as we’d like. You can also connect to a Bluetooth device as well as your Xbox: this means you can listen to your favorite podcast or chat on Discord while playing Xbox games.

The Xbox Wireless Headset’s microphone opts for a unique design that works admirably. Instead of opting for a detachable or retractable boom mic, the microphone simply pulls down and can be tucked away when it’s not in use. It sits a few inches away from the left-side of your face, but still does a brilliant job of picking up your voice clearly thanks to Microsoft’s voice isolation technology.

A white indicator light is present when the mic is active, so you know whether or not you’re broadcasting to the world. The mute button is located at the end of the mic’s housing, which can be found easily using your left thumb. Clicking it will give you a handy audio notification, too, so you can be doubly sure your mic is turned off.

The microphone also has a clever auto-mute feature which works surprisingly well. The microphone will attempt to block out persistent background noise, like you might get from an air conditioner. We found that on the high setting the Xbox Wireless Headset did a fine job at isolating the music we were playing off our phone once we stopped speaking.

We didn’t encounter any drops or disconnects when using the Xbox Wireless Headset, thankfully. Battery life was also more than reasonable, lasting between 12-15 hours on a single charge during our testing. It takes three hours to fully charge the headset, but you can get four hours of power from 30 minutes of charging, which is handy to say the least.

Should I buy the Xbox Wireless Headset?