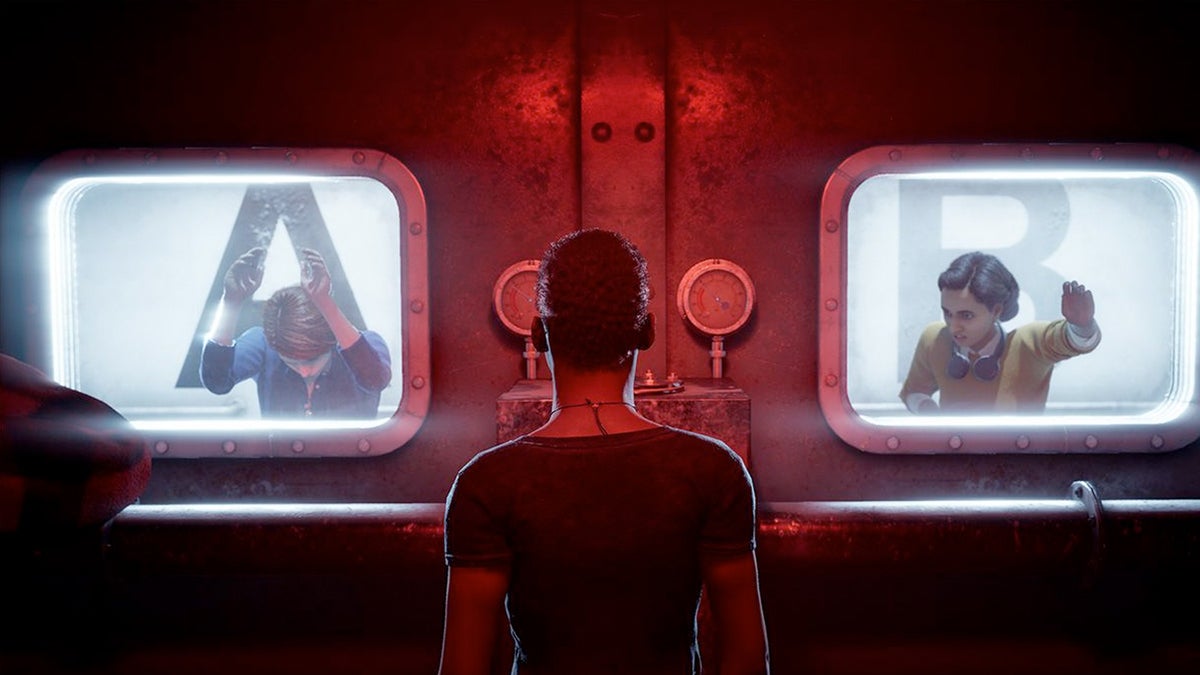 Usually the most unsettling thing you can find in a hotel is a mysterious mattress stain or clumps of hair in the shower drain, but The Devil in Me presents you with accommodations that are less like a Best Western and more like your worst nightmare. Inspired by a real life murder castle and its infamous serial killer hotelier, the fourth and final episode in The Dark Pictures Anthology’s first season presents a fascinating facility full of ghastly deathtraps and creepy animatronics to encounter. Unfortunately it squanders it all on a bland band of lead characters, and pads its runtime with tension-draining detours that made me wish I could have called down to reception to request an earlier check out time.

The Devil in Me’s premise is certainly a tantalizing one. An unsolicited invitation to spend the night in a remotely located reconstruction of H.H. Holmes’ house of horrors would seem easier to turn down than the volume on a silent movie, but it proves to be too good to refuse for a small crew of filmmakers struggling to produce a documentary on America’s first serial killer. The team is effectively there just to grab footage that will lend some authenticity to its production, and indulge in the lavish hospitality of reclusive hotel owner Granthem Du’Met. But the promise of bed and breakfast soon gives way to the threat of bedlam and bloodlust as it becomes clear that Du’Met isn’t just intent on recreating the look and feel of the World’s Fair Hotel, but reenacting the horrifying events that took place within its maze-like structure too.

Unlike the previous installments in The Dark Pictures Anthology which were each inspired by supernatural evils, The Devil in Me’s roots in real historical events brings a far more plausible edge to its horror, which I personally find far more compelling than fantastical tales of ghosts and vampires. Uncovering the clues about the hotel’s disturbing origins and the true identity of its owner remained a gripping endeavour, and I was definitely more preoccupied with piecing its central mystery together than I was with ensuring its five playable leads each remained in one piece by the end.

The main problem with its cast is that they are so uniformly uninteresting that I never felt particularly invested in their attempts to survive this harrowing stay in the heart-stab hotel. The Devil in Me’s early cast interactions provide a broad insight into the group’s dynamic – lighting tech Jamie and sound engineer Erin are nurturing a budding romance, journalist Kate and cameraman Mark are getting over a break up, while the only thing that director Charlie pines for is his lost packet of cigarettes – but the writing just isn’t strong enough to put any real meat on their bones before it can be burnt or bludgeoned by one of the hotel’s devious torture devices.

Developer Supermassive Games did a much better job at adding a believably human spark to its cast via the friendly quips in The Quarry earlier this year, but here any such attempts at playful banter all too frequently fall flat, and it doesn’t help when the lines are often delivered with dead-eyed stares and stilted movements that make it seem like each character is literally scared stiff. There’s just very little warmth to anyone on screen, and thus when three members of the team were snuffed out during my seven-hour playthrough, each of their grisly fates elicited shrugs of apathy instead of shrieks of anguish.

There was still a solid serving of scares though, typically delivered via the sudden jolting to life of the warped animatronic hotel workers and residents, first introduced in the form of an ominously silent bartender in the hotel bar and growing increasingly twisted in design as the story progresses through the darkest recesses of the building. A more physical threat is the mysterious masked assailant dressed as H.H. Holmes who stalks the separated members of your squad from the shadows like a bowler hat-wearing Michael Myers. The occasional encounters with him successfully ratchet up the tension even though they each rely on the reused set of run or hide decisions and quicktime events that have long become the standard in Supermassive’s horror template.

Such tension is rarely maintained for long, however, since despite the variety of torture chambers to be found in its sadistic setting, the main thing that The Devil in Me seems hellbent on killing is time. There are significant stretches spent meandering around in the gloom, shimmying along ledges and crawling under fallen trees in the hotel’s island surroundings where you are safe in the knowledge that absolutely nothing can hurt you when you’re outside of an interactive cutscene. There are certainly secrets to find, like the premonitions that hint at potential character fates, but there’s also boring crate-pushing environmental puzzles and balance-beam walks that do little but pump the brakes on your progress forward.

What We Said About The Dark Pictures Anthology: House of Ashes

In many respects, you know exactly what you’re getting with The Dark Pictures Anthology: House of Ashes. It’s a QTE-filled horrorfest that is often stretching against the limitations of its budget. The script could use some polish and the characters could be a little more outside the box. However, the claustrophobic scares work effectively, and the central mystery of House of Ashes signifies a return to what fans loved about Until Dawn. It gives us a tantalizing look at what could be coming in the future. – Ricky Frech, October 22, 2021

The mansion itself is rich with ornate detail and atmosphere – every walk down a darkened hallway seems slightly more hair-raising when accompanied by scratchy opera music revolving on an old gramophone – but it too rarely feels particularly dangerous to explore. False walls that shift around you are intended to disorientate and induce panic, but instead prove to be little more than a minor inconvenience as you saunter from one end of the obstructed hallway to the other looking for the one door that doesn’t have a locked padlock icon floating in front of it. It’s surprising just how sedated The Devil in Me can seem, and at times it felt like I’d checked into the world’s most terrifying hotel but forgotten to take the ‘Do Not Disturb’ sign off the door.

Efforts have at least been made to make each playable character’s sequences feel distinct. For starters, they’re equipped with a range of contrasting light sources in order to navigate their way through the shadows – the flickering flame of Charlie’s zippo lighter casts an amber glow around his immediate surroundings, while Mark’s camera flash gives only a momentary glimpse at what lies ahead in brief bursts at a time, for example. The latter would have been a great way to startle with flashes of horror like the instant camera in developer Bloodious Games’ Madison, but unfortunately it’s not used nearly as creatively here.

The Dark Pictures Anthology: The Devil in Me – Review Screenshots

A modest inventory system has also been included for the first time in The Dark Pictures Anthology series, and this at least introduces different ways to interact with elements of your surroundings. Charlie’s business card can be used to jimmy the locks of certain drawers in order to access additional evidence, while Erin’s shotgun microphone is used to a reasonably unsettling effect in one sequence to isolate the tortured moans of an unseen victim.

At times it felt like I’d checked into the world’s most terrifying hotel but forgotten to take the ‘Do Not Disturb’ sign off the door.

However many of the unique character-specific tools seem somewhat redundant. Jamie has an electrical multimeter to help her repair tripped fuseboxes, but its analogue display doesn’t really seem to indicate anything of consequence as you idly flick the switches in the sequence indicated by each fusebox’s instructions. Meanwhile the monopod for Mark’s camera is eventually augmented with a sharpened drill bit to fashion it into a weapon, yet I was never presented with an opportunity to use it even though he stuck around all the way to the end credits. Such is the branching nature of The Devil in Me’s narrative that subsequent playthroughs may well uncover more meaningful uses for these devices, but based on my first experience the inventory system seems like an addition to The Dark Anthology formula that’s more superficial than Supermassive.