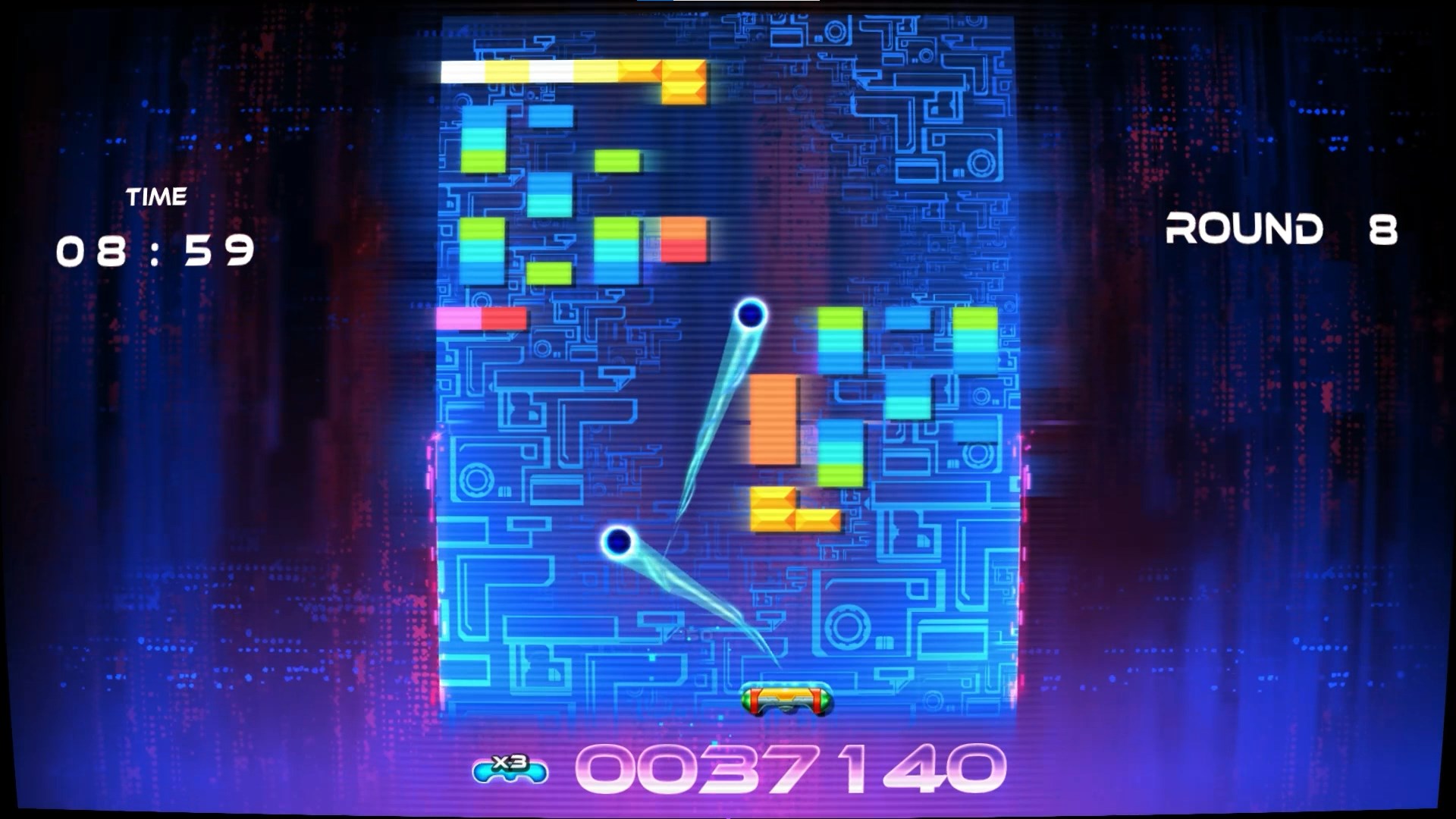 What is the latest trend in videogames? You know, the one thing that a developer creates before everyone else decides it’s the go-to mechanic for a few years. Well, it turns out it is still the battle royale game mode. Nearly five years after PUBG burst onto the scene, it seems that battle royale is still the done thing. And that’s why it has been implemented into an Arkanoid game in Arkanoid Eternal Battle. It’s just a shame then that nothing else has really been added.

Arkanoid as a game really shouldn’t need an introduction. It was Taito’s answer to Atari’s Breakout, but many would argue this brick breaker actually surpassed its inspiration. And whilst technology has moved on tremendously to the point where a brick breaker feels a bit too basic nowadays, there is still a lot of love for the genre.

And the teams at Pasta Games and Microids are aware of this cult legacy, so the original 1986 version is included in Eternal Battle. It follows the traditional format of giving you three lives to see how far you can get through the thirty-two levels. However, if you perish, you can restart from the level you failed on. Just minus your score. The challenging difficulty remains, but with a bit of modern leeway.

There is also Neo mode that is the traditional Arkanoid gameplay but in a modern setting. Each of the various coloured bricks offer a different amount of points, and the longer you keep the ball in play, the higher your combo can reach. This has forty-five levels in total and you can continue a game if you lose all your lives, sacrificing 50% of your total score.

But the standout mode has to be the Eternal Battle battle royale mode as you compete against twenty-four other players for Arkanoid supremacy. Players must clear grids as quickly as possible, racking up points and sabotaging others. If the ball drops, your score drops by 10%, and can see you drop down the rankings just as quick. Make it to the final four and face-off against the remaining players to defeat DOH.

You can see your position at all times, and how well – or not so well – others around you are doing. You will all go through the same sequence of grids so don’t need to worry about getting a harder grid than your competitors. Your biggest worry should be finding real-life competitors.

Despite having full crossplay capabilities – even on the various leaderboards – the online portion isn’t exactly overflowing with players. I have never achieved more than one human player to face-off against. Eternal Battle does fill the remaining slots up with AI opponents so you don’t miss out on not having a full lobby, but nothing compares to a real-world opponent.

In terms of a battle royale, Arkanoid Eternal Battle is most akin to the short-lived Super Mario Bros. 35. Ultimately, you are playing the exact same Arkanoid game you know and love, but with battle royale elements shoehorned in. You can send the occasional debuff to an opponent above or below you in the current rankings, but you are largely left to your own devices. Indeed, it has only ever been my own skill – or lack of – that has meant I haven’t won a game of Eternal Battle, rather than an opponent sending me a debuff.

Whilst an interesting concept, it struggles to really gather momentum by not providing anything majorly different. But then again, it is Arkanoid; adding a battle royale mode is about as much variation you can add. That isn’t a criticism on brick breakers necessarily, but they’ve been around for nearly forty years now. There is only so much you can do with this ageing genre.

Finally, there is local versus mode included, letting you compete against friends – and AI opposition again – to complete walls faster than your opponents. Lose the ball and a couple of random bricks will turn grey, requiring more hits to break them. I’d argue this is more fun than the Eternal Battle mode, as with friends, it can all get a bit tense during a gaming session.

And then we get to the price. It is always hard to criticise a game for being expensive, but sometimes it needs pointing out. Arkanoid Eternal Battle will set you back £24.99; a tough pill to swallow and may even go some way to explaining the lack of players in the online lobbies. For what it is, it’s expensive and perhaps twice as much as what I’d be willing to pay.

But of course, if you love Arkanoid from the ‘80s or just brick breakers in general, you’ll have likely picked this up already. There isn’t much in Arkanoid Eternal Battle to entice new players; nor battle royale aficionados looking for something different as those new mechanics are very basic. It’s a nice touch to include the original game in Arkanoid Eternal Battle, but it doesn’t go far enough to justify its current price tag.

Arkanoid Eternal Battle is available on the Xbox Store