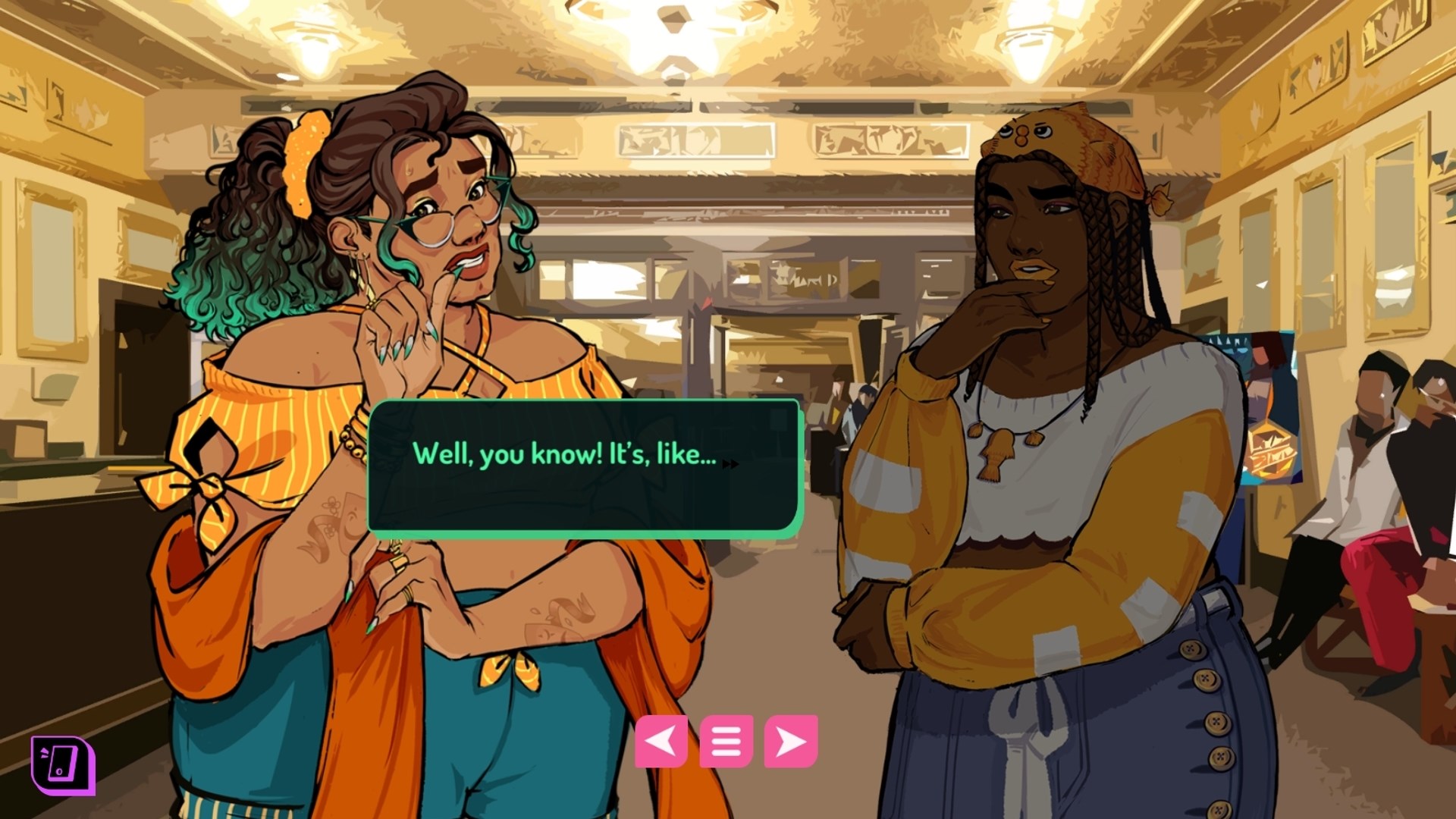 Modern dating is rubbish. It’s the only conclusion that can be made from playing ValiDate: Struggling Singles in Your Area. It’s a visual novel and dating sim that is stupendously all-encompassing, covering every kind of relationship across a multitude of genders, body shapes and sexual orientations, yet the one common thread is that modern dating is hard, anxiety-ridden and unabashedly rubbish.

Our first thought, as we started dallying with ValiDate, was how much it looked like Arcade Spirits. Arcade Spirits is a series of popular visual novels that brings dating into the gaming sphere, as well as being some of the more popular examples of the genre. We even started hunting through IMDB pages to see if there was a connection between the two. But it’s an ill comparison, as Arcade Spirits is fun and frothy; ValiDate: Struggling Singles in Your Area is instead a rich, sharp wine.

Events start with Malik, who is a shock for someone expecting Arcade Spirits. He is an upcoming rapper and part-time baby-daddy, but most of all he is an utter dick. He swaggers into a bar that’s been taken over for a slam poetry reading, looking down his nose at everyone before hitting on the organiser, Yolanda. His attempts are a fumbled mess and the two are clearly not meant for each other, so Malik heads home. It’s chapter over, and we began to worry. Are we going to have to spend more time with Malik?

We should have had more faith in ValiDate: Struggling Singles in Your Area. It wants to show you people like Malik, not only because it’s planning to redeem them (and let you do the redeeming), but it’s got its sights set on being an anthology series. Malik is just one of many protagonists in ValiDate, and the aim is to scrutinise the dating scene from every conceivable perspective. He is just one of those perspectives.

The structure begins to take form. With each chapter that you play, the game blossoms outwards. More often than not, you will gain an additional date for the character you just played, but you may also unlock a new character to play, too. The menu lets you choose from a wide range of characters and dates, and the choice is whether to stick with the character you’re slowly getting to know, or to move onto someone new.

So, we ditched Malik and moved on. Inaya came next: she is a Youtube chef and bisexual who can’t seem to shake deep-seated anxiety about her body image. The comment threads on her videos probably aren’t helping with that, as they brutally call out her body hair and sweat. But as much as she tries, her eyes keep scanning to the comments, and the building anxiety is spreading into her private life. Each of her encounters are fraught and full of worry.

Skip to the next character and there’s Emhari, a mixed-heritage teacher who is recently divorced and desperately trying to keep to the timetable set by a custody ruling. She is gender-fluid and mixes her pronouns, and is just as anxious as Inaya. And finally there is Isabelle, a bisexual Chilean and theatrical scriptwriter who is tormented by both her writer’s block and lack of action. And yep, you guessed it, she has deep-seated anxiety about both.

Jercey City, the fictional (but clearly cap-doffing) setting of ValiDate: Struggling Singles in Your Area must be small, as the same characters keep flitting through everyone’s storylines. The fantastically named Bigs Smallson, a ‘USP’ postal worker, appears in all stories, as does the previously mentioned Yolanda and many, many others. Through dating them and developing relationships with them, you create character studies of them all. They become three-dimensional, as they are exposed to your different characters and their varying approaches to wooing.

Through all of this is a reasonably conventional visual novel. There’s plenty of reading, as you would expect, and sporadic choices pop up for you to make. These might be more divergent than you might expect, as seen in ValiDate’s sixty-eight (68!) achievements – most of which have 0 Gamerscore, the sacrilege – each rewarding good, bad and rare endings. Conveniently, you can also skip to these endings through the pause menu, so there’s no denying you a destination.

What ValiDate: Struggling Singles in Your Area does best is expose you to people and relationships that are under-served in gaming and, well, almost all media really. The gender fluidity and complete lack of white, cis-centric relationships is utterly refreshing. From Isabelle’s incredibly large and affectionate Chilean family to Emhari’s inclusive relationships, there are romantic and platonic relationships that simply don’t get seen. The abandonment of cliche is cracking, and ValiDate keeps hungrily looking for a new romantic story to tell.

The writing is consistently of a high standard, too. Visual novels have a tendency to be wordy and often mistranslated, making them a hard read, especially in comparison to a good book. But there’s none of that concern here. Although this is an anthology game, with several different writers, they are each clever, witty and emotionally intelligent. Characters get rounded out nicely, and it takes its time to do so. It knows that you’re going to visit each character several times, so doesn’t feel the need to rush into anything.

What lets ValiDate: Struggling Singles in Your Area down, in our view, is a safeness when it comes to plotting. The anthology format allows ValiDate: Struggling Singles in Your Area to avoid things like a progressing narrative. The stories could – mostly – be told in any order, and they all have the same topic: forming connections, and the toll those connections take on mental health. The result is a story that stays reasonably still, and errs on the repeated.

There’s a criticism that we feel wary making, not only because it’s subjective, but also because it doesn’t make us sound particularly sensitive. Our problem is that so much of ValiDate: Struggling Singles in Your Area is spent with characters who are wrangling with some form of anxiety. It’s completely and utterly understandable, don’t get us wrong: dating in this way must be incredibly challenging. But such a large proportion of ValiDate is spent wrestling an inner turmoil and – we’re sorry – it just isn’t overly dramatic. When all of the characters have some variety of the same issue, it also becomes repetitive. We hate to say it, but we almost became numbed to it, and wished ValiDate would move things on a little, or see things through different eyes.

Still, we would happily go on another date with ValiDate: Struggling Singles in Your Area. They’re a talkative partner, slightly self-absorbed and clearly dealing with their own issues, but they are also charming, witty and not quite like anyone else we’ve met. If you want to fall in love with a new visual novel, the chances are that at least one of the short-stories in ValiDate will give you the butterflies.

You can buy ValiDate: Struggling Singles in Your Area from the Xbox Store