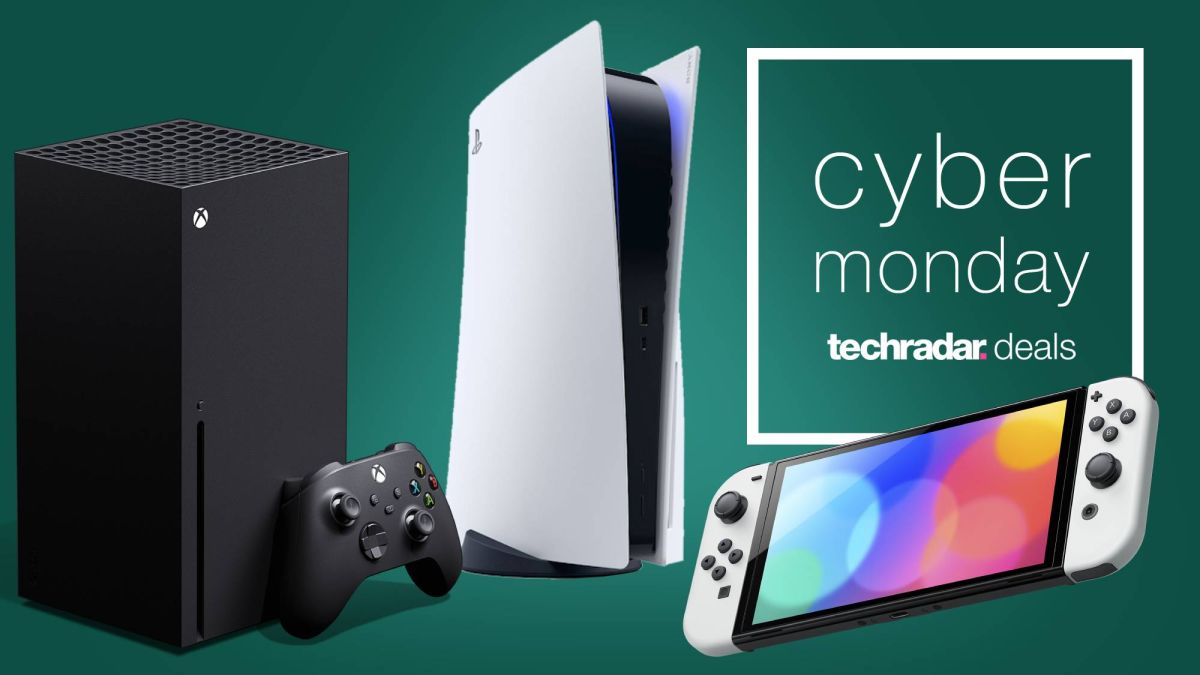 If you’re looking for a premium headset, and we’re talking top shelf here, then you may be interested in Amazon’s deal on the Bang & Olufsen Beoplay Portal for PS5 and PC. They’ve had a $200 discount, taking them down to $299 (opens in new tab).

So, if you’re in the market for premium, here it is at a sizeable discount.

Call of Duty: Modern Warfare 2 isn’t even a month old and it’s already got a significant discount as part of the Cyber Monday deals, coming down to just $55 (opens in new tab) at Walmart. $15 off its $69.99 RRP isn’t something to be sniffed at for sure.

Walmart’s Cyber Monday deals have dropped, and they include the lowest-ever prices on one of the best wireless headsets around, compatible with PC, PS5, and Switch: the SteelSeries Arctis 7+ Wireless Gaming Headset.

Walmart has dropped the price of the headset to $99 (opens in new tab), a lovely $70 discount.

If you can’t get your hands on an Xbox Series X, the Xbox Series S may be quite a tempting alternative. After all, the Series X is a full $200 more expensive, and the Xbox Series S isn’t a significantly weaker console. It still boasts a 512GB SSD, can run games at 1440p, and is a much smaller device.

If you’re looking for the most powerful machine, to play your games in 4K, and experience Dolby Atmos audio, then, yes, you should get the Xbox Series X, but, if you just want access to the current generation of the best Xbox Series X games and you’re not fussed about the screen resolution, then you should strongly consider getting an Xbox Series S.

Especially when they’re on an offer like this one: currently, you can get an Xbox Series S on Amazon for $249.99 (opens in new tab), and it comes bundled with $40 of Amazon store credit.

For a more detailed breakdown of the consoles, we’ve put together an Xbox Series X vs Xbox Series S piece that goes into a lot of detail.

If you’ve been searching for Cyber Monday Oculus Quest 2 deals, then you may have already come across this bundle. It’s the same offer that Meta launched earlier this week, ahead of Black Friday. The reason I’m sharing it again is that this is very likely as good a deal as we’re going to see, and if you’re holding out for something better, then you may miss it if stock runs out.

The Oculus Quest 2 (128 GB) edition, bundled with copies of Beat Saber and Resident Evil 4 VR, two of the best games on the VR headset, is currently selling for $349 (opens in new tab). That’s a $50 discount on the headset’s RRP, without throwing in Resident Evil.

Yes, this is more than the Oculus Quest 2 sold for before its price was hiked earlier this year, but we’re unlikely to see a price drop any time soon, so this is the deal that’s on the table. If you want an Oculus Quest 2 and don’t want to wait for the much more expensive Meta Quest Pro or PSVR 2, then this isn’t a deal to wait on.

If you like to game on your phone, then it can be a good investment to get yourself a controller peripheral, particularly if you subscribe to Xbox Game Pass Ultimate, and so have access to Xbox Cloud Gaming. With a decent gamepad, you can play through games like Halo Infinite on your phone, while your television is dominated by someone – not naming any names… Emily – who is watching Schitt’s Creek from start to finish again.

The Backbone One is a lovely-looking gamepad, which is always nice, but it’s also a really comfortable device. It’s even more tempting thanks to a $25 discount on Best Buy, bringing the controller down to $74.99 (opens in new tab). And, the controller comes bundled with a month of Xbox Game Pass Ultimate, too.

While one of the best SSD for PS5 is your first port of call, the next add-on you can buy for your console that will significantly improve your gaming experience is… still isn’t a second DualSense controller. Sorry co-op buddies, the focus is on solo gaming first.

You want to consider getting yourself a headset that provides 3D audio. When Sony first revealed the PS5, it bigged up the console’s SSD and its immersive sound. Thing is, while you feel the benefits of the SSD with every game, you only get to experience 3D audio with a compatible TV or headset. And it really is a game-changing feature.

However, while 3D audio is available on some televisions, that’s quite an expensive way to access the feature, it’s much more affordable to get yourself a decent headset – especially when they’re in the Cyber Monday deals.

Considering my gaming chair is a dining chair I found abandoned on a street, this is a do what I say and not what I do situation, but let me tell you, you don’t want to skimp when it comes to your spine. If you spend a lot of time at your desk gaming and working, then you should look into investing in a supportive ergonomic chair.

Unfortunately, the best of them can be a significant outlay. The good news is a good chair should last you years, but even so, if you can pick one up at a discount, then you can save hundreds of dollars.

We’re collecting together a large selection on our Cyber Monday gaming chair deals hub, but here are a few of the best at different price points.

Continuing in the vein of recommending storage options, one of the top things you can buy for your PS5 isn’t a new DualSense wireless controller or a Pulse 3D wireless headset (though both are, admittedly, great), it’s an internal SSD.

The PS5’s superfast Solid State Drive loads game data incredibly quickly, eliminating most loading screens and letting you transfer between games quickly. The drawback, however, is that it’s not particularly large. The PS5 only really lets you install 600GB or so of games. This means, now that many games are more than 100GB, you can only have a few installed at any one time.

The solution is installing an additional SSD, it’s a surprisingly easy process, just slotting it into a slot in the console. The problem is getting your hands on one for cheap. These are often very expensive components, but in the Cyber Monday deals, we’re seeing quite a few of the best SSD for PS5 discounted to great prices.

For example, the WD_BLACK 1TB SN850X NVMe Internal Gaming SSD is going for just $109.99 (opens in new tab), down from its usual $179.99. We’ve seen a few drives go for even less, but they look to have dropped out of stock. If they come back on, I’ll share them here, but for now, maybe don’t wait, as this deal may run out soon, too.

When it comes to Cyber Monday gaming deals, your first thought may be discounts on consoles, cheap games, or straight up weird peripherals that are cut to such low prices you just have to give them a punt. However, what I’ll recommend again and again in this live blog are cheap storage options.

Games are getting bigger and onboard memory in consoles is not keeping up. This means more and more of our time is redownloading games we deleted to make space for other games. It’s a dull shuffle using up time we could have spent gaming. That’s why increasing your Nintendo Switch’s storage capacity with a Micro SD card is a seriously good purchase, especially when we’ve never seen such a deep discount on a 1TB microSD card.

On Amazon Right now, and for one day more only, you can get a SanDisk 1TB microSD card for just $99.99. That is a silly low price for that much storage. If you buy one thing for your Nintendo Switch this Cyber Monday, this should probably be it.

While I’m out here trying to find specific deals, you can sort your own discount by using a reduced gift card. Over at Target, you can but an $25 Xbox gift card for just $20 (opens in new tab), a 20% discount. Use that to buy a $25 game and you basically just bought it for $20, in effect applying your own 20% discount to a game of your choice.

It appears it’s only the $25 card that’s on offer, but there’s nothing stopping you from stacking them.

If you’re in the market for a new Xbox Wireless Controller, which you’ll be able to use with an Xbox Series X|S, and your PC, then there’s currently a great deal on at Lenovo.

When it comes to console discounts, the Cyber Monday Nintendo Switch deals have been the standout this year. Yes, the console has been around longer than both the PS5 and Xbox Series X, but with near-constant demand for Nintendo’s nifty hybrid home and handheld console, we could easily have seen stock shortages or only minor discounts.

Instead, there have been some excellent bundles that have paired the console with some of the best Nintendo Switch games.

Microsoft has done a much better job of keeping its Xbox Series X and Xbox Series S consoles available, not just over this Black Friday weekend, but throughout the year. While we’ve seen the full-fat Xbox Series X disappear from some shops, it’s usually been available somewhere.

Let’s kick things off with the best Cyber Monday PS5 deals we’ve seen so far. In the case of Sony’s console, we aren’t just flagging the (admittedly few) discounts available, but also giving shout-outs to which retailers have the hardware in stock.  After all, it’s still surprisingly hard to lay your hands on one of the machines.