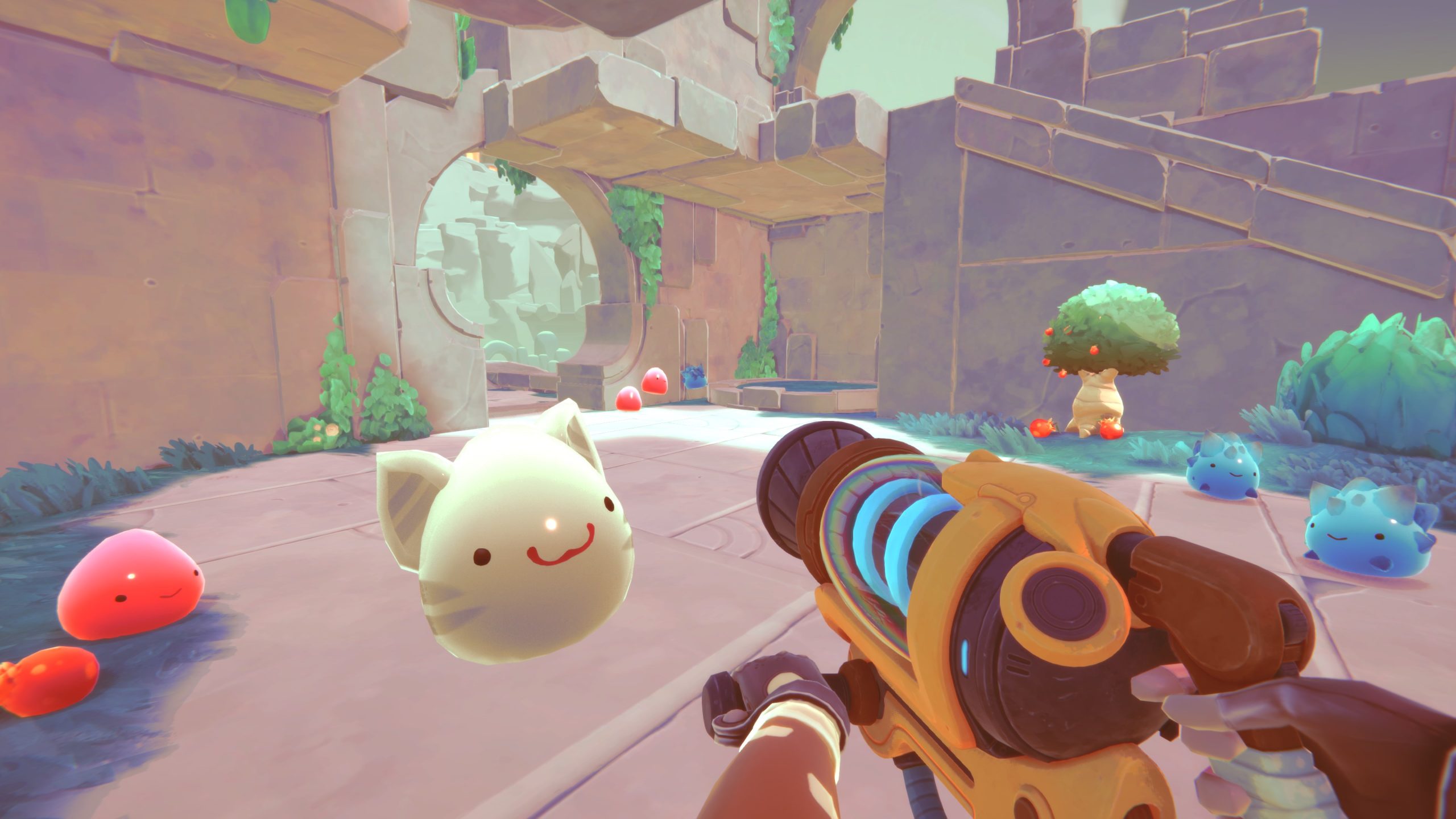 The premise of the game is straightforward, you are an adventurous rancher who has set out to a new island. There you are free to find and capture slimes to your heart’s content. These cutesy blobs of slime make great pets and are completely exploitable for personal gain.

It’s an incredibly chill game with a relaxing soundtrack and game settings that you can adjust to remove any real sense of risk; perfect for anyone who is looking for a completely carefree experience. After a few hours of playing, I can comfortably say that it’s shaping up to be a very enjoyable game.

Whether you’re just getting done with a long day or you’re unsure of what you want to do, a nice chill game is the perfect way to relax. Slime Rancher 2 fits that bill perfectly. Even when playing on the default settings, the difficulty is incredibly minimal, violent slimes are rare to spawn and there aren’t any punishing systems in place that add a sense of difficulty.

The flipside to that is that the game can end up feeling fairly grindy with minimal challenge, so it is possible to fall into a fairly repetitive cycle that focuses on grinding instead of exploring or taking advantage of the content.

It is also still in its Game Preview phase so it’s currently impossible to say how much content the game is going to ultimately have. The final progression systems and settings to control difficulty are going to be paramount to the overall success of Slime Rancher 2 once it exits the preview phase.

Slime Rancher 2’s major advantage is that it can build off the success of its predecessor since many of the systems and the overall feel of the game are incredibly similar. There are certainly improvements that have been made, however, whether it is enough to justify an entirely new game remains to be seen. As I said, it feels incredibly similar to the first game, for better and worse, but the Game Preview option is something the devs at Monomi Park utilised for the first Slime Rancher – that was in early access for over a year before it saw its full release.

There has been confirmation that Slime Rancher 2 will be in development for a minimum of 18 months before it will see its own full release. That gives the game a lot of time to have content added, helping flush out its current systems and hopefully add some new ones in that will help differentiate it from the first entry in the series.

With the way game development has gone in recent years, I’ve adopted a “believe it when I see it” attitude to game releases. Many announce release dates or road maps that are loosely followed if at all. That being said, I’d rather the time was taken to develop a quality game, then rush it and present it as a complete game when it still needs months of work.

My biggest concern with Slime Rancher 2 at this stage though is the lack of variety in the progression cycle. It doesn’t take long to build a slime ranch that is fully self-sustaining, where you could sleep, farm slimes, sell them, sleep, and repeat.

The economy does vary, with the sell price of resources dropping as you sell them more frequently, but it is currently easy to do that and regardless of the price drop it is still profitable. I still ventured off and explored, and there were certainly more profitable slimes for me to find, but I was able to greatly accelerate my progress. It’s not necessarily a bad thing, but it really exposed the lack of challenge. When a game has systems that are easily exploited, it’s easy to want to exploit them.

The overall world is well-built, with several areas to explore and different slimes to collect. The bright color palette and relaxing music create a beautiful backdrop to your ranching adventures.

Overall, Slime Rancher 2 has a lot of potential, as it hopes to become a great ranching simulator. The technical improvements over the first game are instantly noticeable as are the complete lack of load times which ensures it is easy to sink time into it. The progression cycle needs some more added to it, but there’s plenty of time for that prior to full release.

The foundation of Slime Rancher 2 is incredibly solid, so as long as future content continues to expand and introduce new content, then it’ll shape up to be an extremely fun game. Slime Rancher 2 is a game where more is better, so more slimes, more items, more progression, more everything are what I hope to see. But I have high hopes that these expectations will be met.

Slime Rancher 2 is currently in Game Preview, playable on Xbox Series X|S and PC from the Xbox Store. It’s available on Game Pass too.