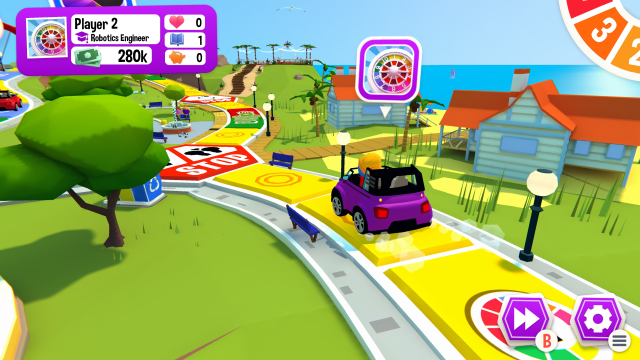 By my count, this is the first standalone version of The Game of Life available on consoles in Europe. There have been plenty of other versions, but the board game simply isn’t as well known on these shores as others. For those intrigued to know more, you are in luck. The Game of Life 2 launches today on Xbox, PlayStation and Nintendo Switch.

The Game of Life is pretty simple; from birth to retirement, you follow the board game making all the biggest decisions you would face in life. Go to university or straight into employment? Have another baby or save that extra seat in your car? Which retirement home will you take? In here though, the only repercussions are whether you will be able to beat your opponent to the wealthiest retirement home. The winner is ultimately the one with the most money, but unlike Monopoly, your aim isn’t to bankrupt others at the same time. Therefore, The Game of Life is a game enjoyed by families, rather than one feared by them.

The Game of Life 2 will feature local and online multiplayer for up to four players. Online multiplayer will be cross generation and cross platform, meaning there will always be an opponent lying in wait.

The base game of The Game of Life 2 is on the Xbox Store now priced at £19.99. There is also a Deluxe Life Bundle that includes the Ultimate Life Collection priced at £24.99. This DLC will include eight new worlds to discover:

These will all come with new outfits for your pegs, jobs, properties and more. The Ultimate Life Collection will also be available separately priced at £16.74.

Have you ever played The Game of Life? Now you don’t have to worry about picking up those fiddly character pegs anymore with this release! Let us know in the comments below if you will be picking this one up.

It’s the modern version of Hasbro’s board game, played by 50 million families and friends around the world. Live in the Classic City PLUS the Fairytale Kingdom and Haunted Hills worlds: included in the game! Each comes with new outfits, vehicles, careers, houses, and items to unlock! Modern Gameplay • Make big career, relationship, and financial choices early or late in the game • Collect points for happiness and knowledge as well as wealth • Retire to a luxury home or keep going! Customisable and Unlockable Items • Customise your pink, blue or purple peg at the start of every game • Unlock new avatars, outfits, and vehicles Ultimate Life Collection • 7 amazing worlds await in the Ultimate Life Collection! Buy the base game AND every world together in the Deluxe Life Collection!

Atomic Heart Has Gone Gold a Month Ahead of Launch
Forspoken Purple Magic guide: How to get the most out of your spells
DualSense Edge wireless controller launches globally today
The Evil Within’s Creators Made A Colorful Rhythm Game And It’s Out Today
New Mario Bros. Movie Footage Shows Off Seth Rogan As Donkey Kong