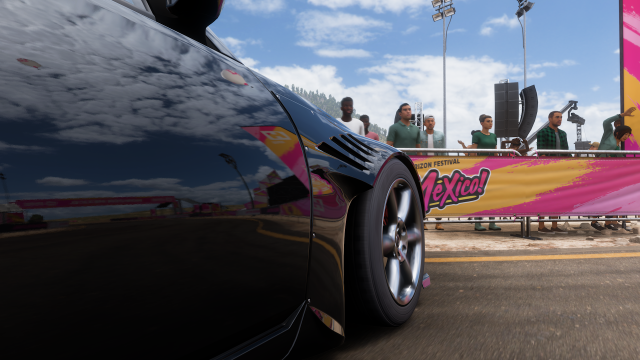 Spring has sprung over in Mexico, in Forza Horizon 5 land no less, and with the final week of Series 14. I swear that these days are coming around faster and faster. Still, time marches on and waits for no man, so let’s get cracking with this new season and see what’s in store. Fasten your seatbelts, start your engines and let’s peel out!

This week the subject of the weekly challenge is a car that has an unfair image as a bit of an air hostess’ car- the 2010 Audi TT RS. Despite starting off as a Golf in a posh frock, the TT has really come into its own, and with AWD and a go-kart like handling style, they can be a lot of fun.

The car isn’t a prize this week for anything, and so will have to be bought if you don’t already have one. However, it is a very reasonable 66,000 credits at the Autoshow, so pretty cheap.

Get in your shiny new TT and take it out onto the road. Step one done!

Earn two stars on the Switchbacks Speed Zone, apparently in tribute to the car’s name being rooted in the annual Isle of Man speed fest? Sounds like nonsense to me, but might be a bit of fun.

Now that I have given you one share code, it’s time for another!

Finally for this week, do an Ultimate Burnout skill in the TT. The tune above should see you shredding rubber in no time.

And that’s this week’s challenge done.

With the new season comes new challenges, which I always look forward to.

This week we have the usual mix of The Trial, some PR Stunts and racing championships to sink our teeth into. While the Eventlab is hanging around like a clown at a kids party, we can still enjoy ourselves. Let’s hit the streets!

More Bumper 2 Bumper type fun this week, as we attempt to beat the Unbeatable Driverbots. Luckily, they aren’t, and even with the random selection of people from the internet to help/hinder (delete as appropriate), we should be able to pull this one out of the bag.

This week, the theme is A Class 800 cars, of any flavour, and since the races seem to be loose surface, maybe something with chunky tyres should be our preference. As always when I have to offroad, I do it in a Jeep, and the  mighty Trailcat, with a share code of: 118411445.

Our prize for winning this week is a McLaren 600LT, so pretty good.

Our invitation to play a game appears this week again – it is Team Flag Rush.

This isn’t a bad game, where we have to pick up flags at one end of the arena and deliver them to the other, while our foes try to stop us. The limitation this time is A-Class 800 Super Saloons, and so I went with an Audi RS 6 Avant from 2015, which is very much not a saloon, and the share code is: 736888629.

There is also a rather fetching TheXboxHub livery available too, should you be interested.

Get in a car and attempt to fly some distance. The distance this week is 630m and the class is restricted to S2 Class 998. Clearly this is a job for my bestest ever car, the Koenigsegg Agera, and its share code is : 109282883.

Get a decent run up down the Highway (the danger sign is on the roundabout at the end) and this car will see you right.

Seeing you right will also net you a Super Wheelspin, which is good. Keep those fingers crossed!

There’s no easy way to say this – we need to scream past this speed trap at 135mph, on a loose dirt surface. Obviously, the Koenigsegg may be out of its depth here (almost literally as there is a river ford in the road).

Another Super Wheelspin for paddling past at speed.

We have to get a car around this speed zone, at an average speed of over 115mph. And not just any car, but an S2 Class 998 one. Step forward Mr Agera!

Share code is still the same as earlier, and this will take some careful driving, as the curves in this zone are very tricky indeed. Cut as much as you dare, then cut a bit more is my only advice.

Get another Super wheelspin for succeeding

Our restriction for this championship is that we have to use an Extreme Track Toy, tuned to S2 Class 998.

Win a Ferrari 812 for winning best two races out of three in a convoy, or the championship outright solo.

Do you want to slow things down a bit after that last championship? Well, have I got good news for you.

It’s pretty slow, but this means every corner counts. You’ll want to keep your speed up as acceleration isn’t this thing’s strong point.

Our prize for coming out on top? A rather tasty Jaguar XKR-S from 2012. Rawr.

A retro Rally car tuned to C Class 600 is our challenge here, and so I went with the classic Mini Cooper S from 1965. The share code is 176823547, in case you fancy reliving the victories of Paddy Hopkirk back in the day.

We will score a nice Ford for winning, the GT70 from 1970, fittingly enough.

Other challenges are thin on the ground this week, with only a photo to take and an invitation to the Horizon Tour to consider. Read on for the details!

Get a Nissan Fairlady Z from 2003 (called a 350Z where I’m from), take it to the Horizon Mexico Festival site, and take a picture. Pretty simple, right? Well, yeah!

I’ll include my artistic impression below, along with the location in case you get lost easily. For taking a picture, we get a new emote, “Snap!”. Totally worth it.

The introduction of the Horizon Tour was a great addition for this title, I feel, as it added another layer to cooperative racing, where we could team up against the AI driverbots to bring home the bacon.

You know the score – five living, breathing people vs five bots, with a mystery tour in between each race. I can’t recommend a tune to you as it just depends what class and race type you get issued with.

Prize for completing these is 3FP, so you know, every little helps.

The Hot Wheels portion of this playlist does require you to have made Elite rank or better. We’ve all done that by now, right? Good, so let’s check out what is waiting for us high above Terra Firma.

We need to go to the Hot Wheels park and engage in a little drift based tomfoolery, in an S2 Class car. I went with a stock Hoonigan Hoonicorn, as it is made to slide and so should have no trouble smashing the total.

What is that total, I hear you ask? Well, it is pretty big – a grand total of 200,000 drift points is needed to emerge victorious.

If you can slide, a Super Wheelspin will be winging its way to you. And if you can’t, practice.

This should see you right for the win.

And what do we get if we do win? A Morris Minor. Sorry about that.

And that my friends is Series 14 pretty much done. Should you have been following our guides for the last few weeks then you would have already ticked off the two Monthly Rivals events, as well as the pretty decent Donut Media Horizon Story. If not, make sure you do those as more points are on offer.

Those points can be exchanged for cars too, with Series 14 – Spring giving you the Morris Traveler and the 911 GT3 ’21. From there, you should also have more than enough now to nab the two full series rewards of the SF90 Stradale and the Alpine A110 ’17.

Series 15 is next up and we’ll be back with another guide and overview to the Festival Playlist Weekly Challenges for that, starting with Summer and moving through the four seasons.

If you care to join us, that would be awesome. You just need a copy of Forza Horizon 5 in your digital library, either on Xbox One, Xbox Series X|S or PC. If you don’t yet have it, the Xbox Store will sort you out. You don’t need to pay for it if you have a Game Pass subscription either.

As always, we’d love to hear what you think of this article. The comments are below and we’re always waiting over on the usual social channels.

HBO renews The Last of Us for a second season
Razer Kraken Kitty V2 Pro review
HBO’s The Last Of Us Will Return For A Season 2
Kenny Omega and Rahul Kohli to feature in Like a Dragon: Ishin!
Horizon Multiplayer Game Possibly Releasing Soon, May Feature Cartoon Aesthetics