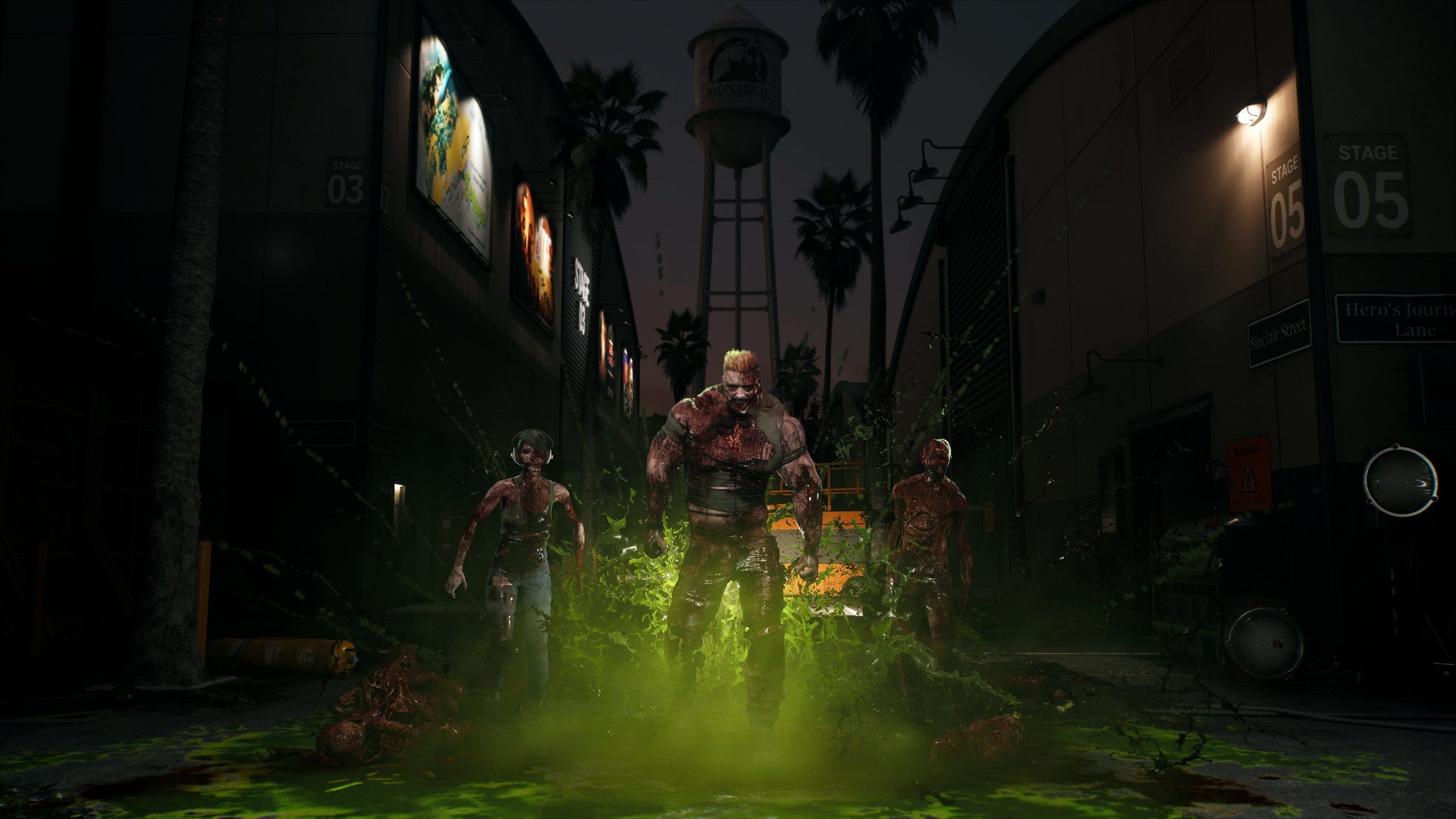 Los Angeles has fallen. The once glamorous hangout of the rich and the famous is now overrun with the undead, and the city is under strict military quarantine. Nothing gets in. Nothing gets out.

You’re the new star in this treacherous tinsel town (which the locals have dubbed HELL-A), and everyone wants a piece of you — both alive and undead — so be prepared to fight an onslaught of zombified Los Angelinos as you attempt to get out of Dodge. 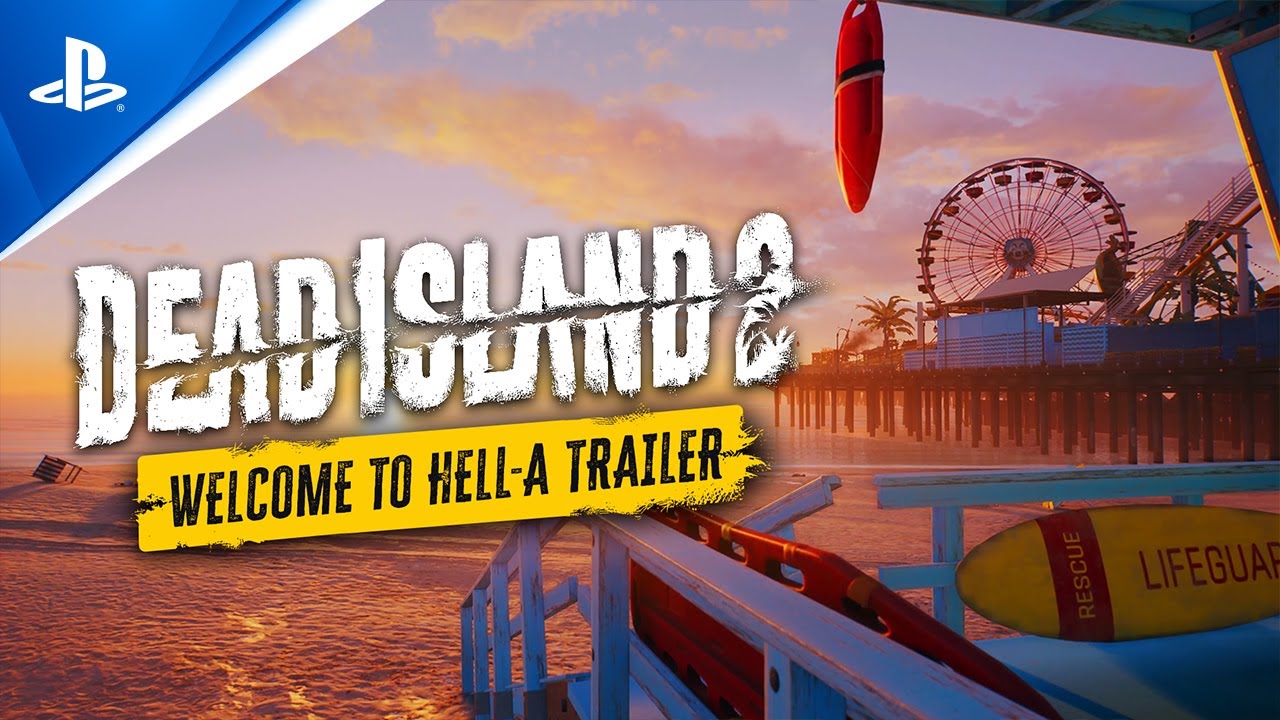 The good news? You’re a natural at this slaying gig. Get ready to decapitate, mutilate, eviscerate, and obliterate any zombie that dares get in your way. The combat system will have you chaining together attacks, blocks, dodges, and special abilities to suit your unique playstyle so that you can slay with maximum efficiency and in style.

You’ll also be utilising the environment to your advantage. Puncture a barrel full of caustic liquid and drop-kick a zombie into the spillage to watch the flesh melt and drop off their skeleton revealing their rotten innards. Nasty.

We sure didn’t skimp on the special effects budget: Dead Island 2’s unique gore tech, F.L.E.S.H (Fully Locational Evisceration System for Humanoids), makes the act of slaying a bloody beautiful affair. Whether it’s your first or 100th time, you’ll be in awe of the level of disgusting detail on offer.

Should you ever need a break from sending the undead to their final resting place, there’s an entire city to explore with lots of sweet loot up for grabs, and if you look hard enough, you may just find some answers about the shady goings-on that have turned LA into a flesh feasting freak fest. The prop department is packing heat

During these trying times, weapons are a slayer’s best friend. Whether you’re into slicing, dicing, battering, shattering, or even gouging your reanimated foes, you’ll be able to find the tool for the job somewhere in HELL-A.

Swords, bear claws, sledgehammers, hunting knives, brass knuckles, and maces are just a fraction of the types of weaponry you’ll find littered throughout the city.

But if you don’t fancy getting brain and bone fragments on your outfit — or have had enough of stale zombie breath — you can pick those suckers off from afar with a whole arsenal of ranged weaponry: grab yourself a handgun, shotgun, carbine, hunting rifle, or even a handy nail gun to get the job done from a more comfortable distance.

If you ever find yourself not quite satisfied with your weapon’s slaying ability, you can hit one of the many workbenches found throughout HELL-A to install some perks and modifications. Add a shock mod to your katana to electrify the blade and zap zombies with each slice. Can anyone else smell BBQ? 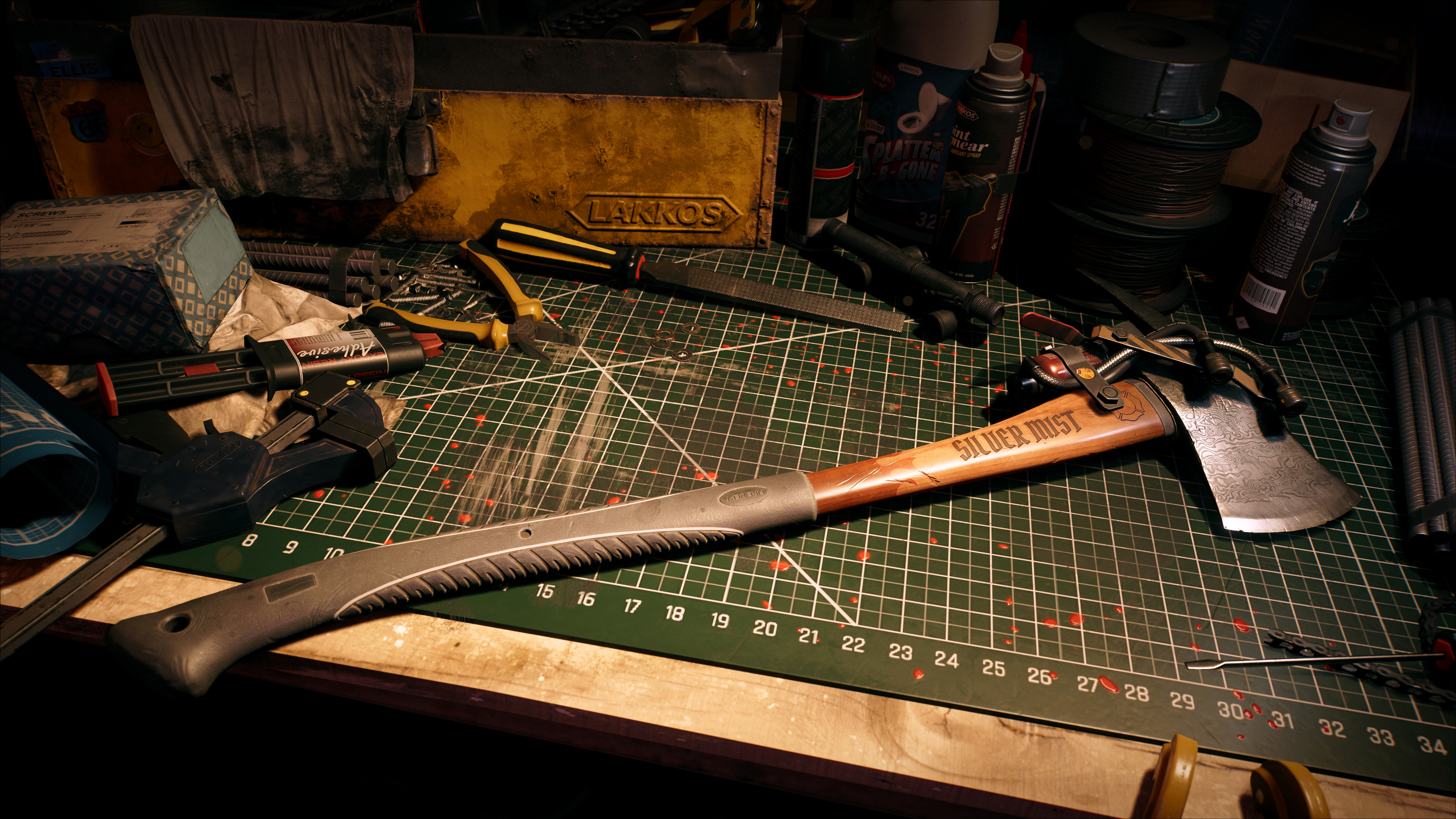 No Hollywood production is complete without an ensemble cast, so naturally, you’ll encounter other survivors during your time in HELL-A.

A former silver-screen cowboy, a scarily committed sci-fi cosplayer, an aging drunk and disorderly rockstar, and a social media personality who goes to extreme measures to please her followers are just some of the locals you’ll meet during your journey.

They can always use a hand from a skilled zombie slayer like yourself and will often reward you for your services with the shiniest and deadliest of loot. 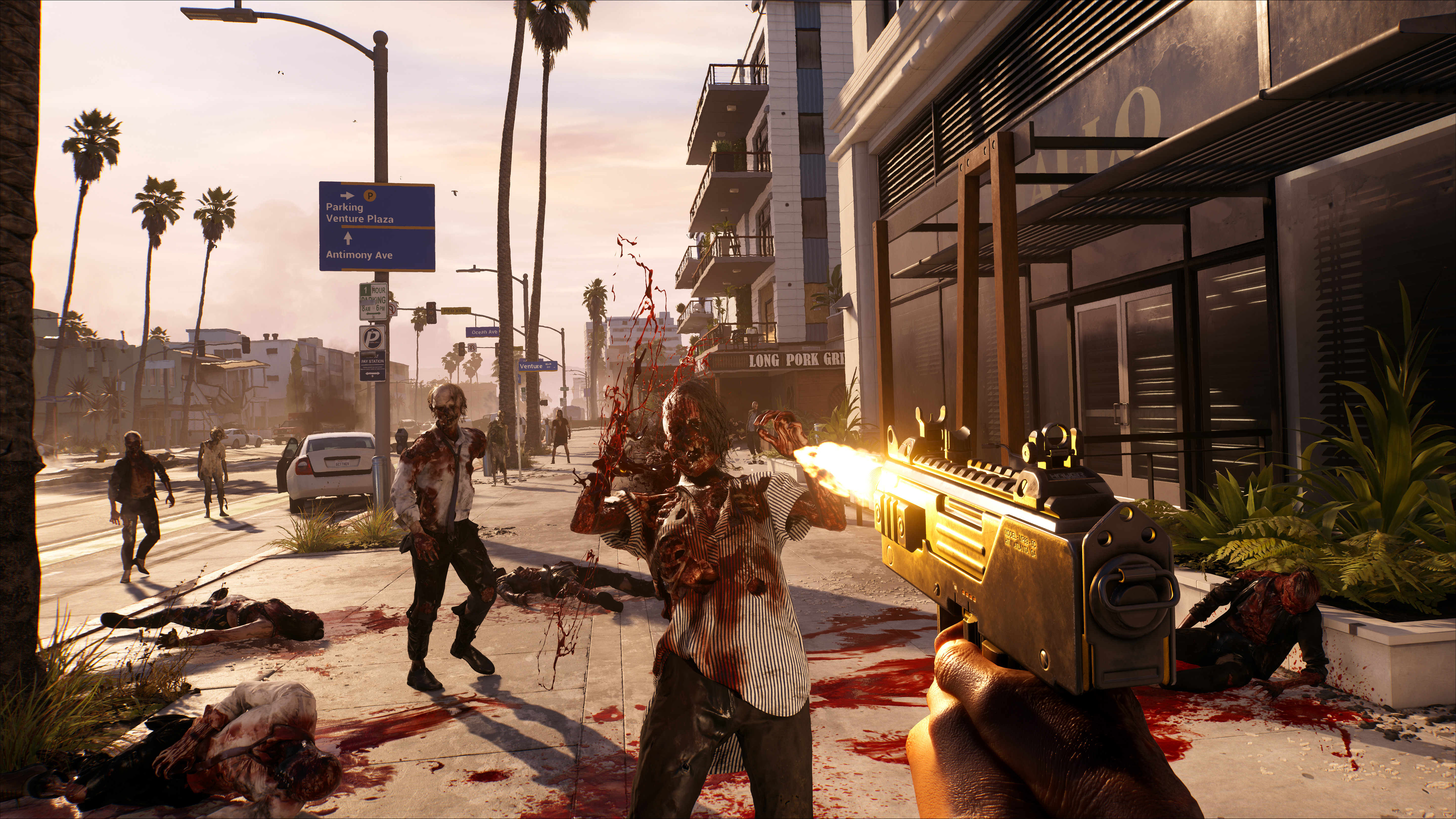 Not your average zombie flick

The archetypal shambling zombie you’ve seen so much of in Hollywood over the years wouldn’t stand much of a chance against a zombie-slaying aficionado like yourself. Luckily, there’s a motley crew of foes in HELL-A, ready to test your abilities.

Some are slow, some are fast, some are really strong, some can make your ears ring with a deafeningly high pitch scream, and some will explode into a thousand pieces of meat and goo if you get too close. You have been warned.

Embrace the zombie inside

Did we forget to mention that you’ve been bitten and infected with the same virus that has turned everyone else into the living dead? But it hasn’t taken over completely, just yet. Instead, you’re riding the wave of the infection, sitting somewhere between human and zombie, which comes with its own set of abilities.

When the slaying gets tough, activate Fury mode to unleash your inner zombie and begin tearing through enemies at a moment’s notice. That’s just the surface of your newfound powers, but more details on that later… 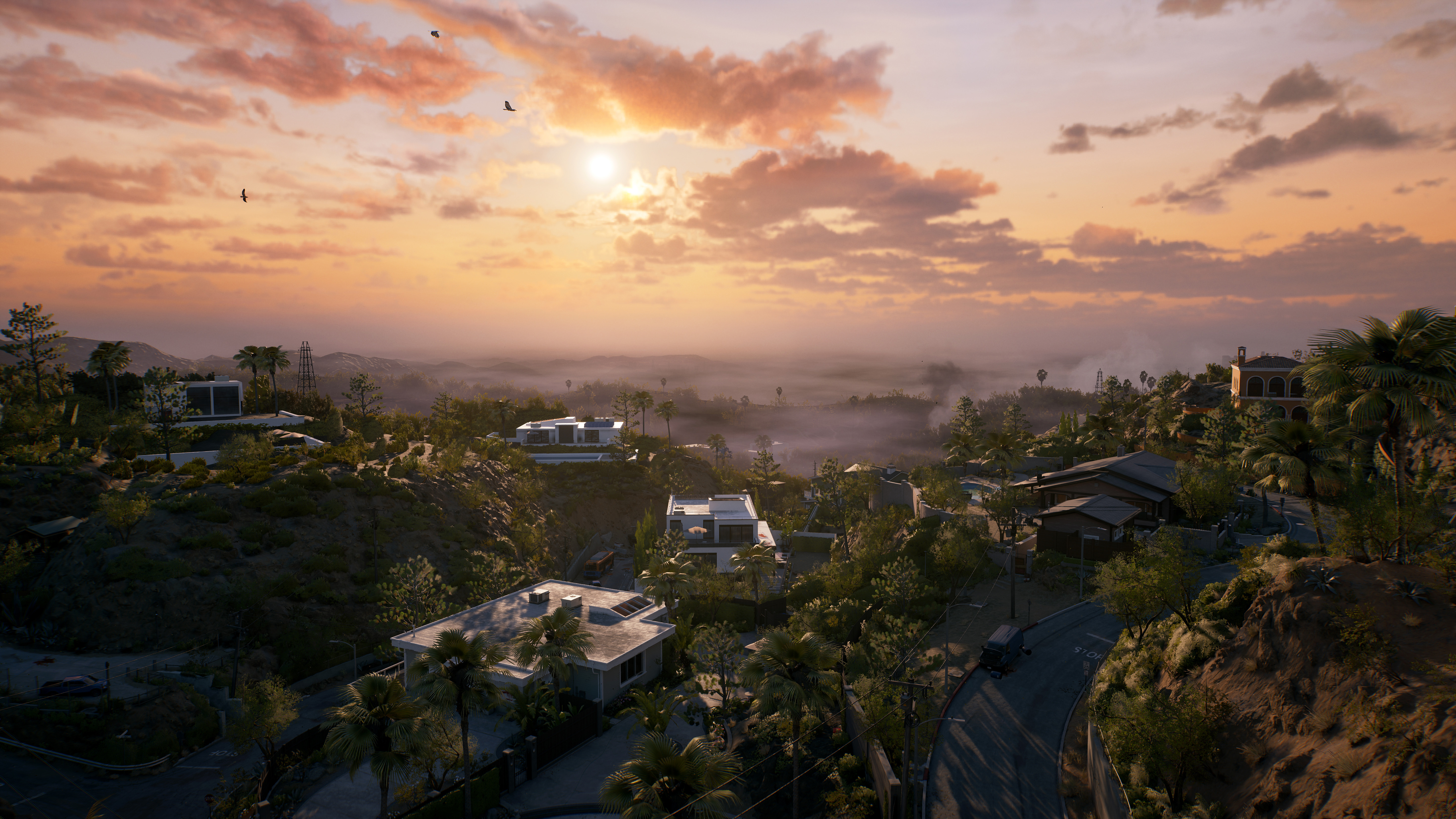 See you in HELL-A

All that’s left to say is that we’ll see you in HELL-A on PlayStation 4 and PlayStation 5 on April 28, 2023. Pre-orders are now live. Happy slaying!

Wonder Boy Anniversary Collection now available on Nintendo Switch
AMD’s Ryzen 7 5800X has dropped to £200 on Amazon UK
Naughty Dog Is ‘Done’ With Uncharted and ‘Moving On’
Random: People Are Sharing Their “Useless” Video Game Knowledge On Twitter – Here Are The Best Ones
You can check out the first episode of The Last of Us on YouTube for free right now