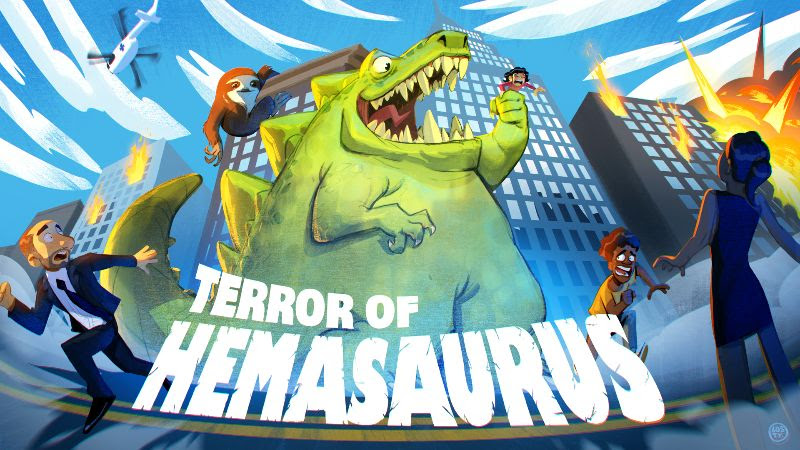 If it’s a monstrous city smash ’em up that you are after, the Terror of Hemasaurus looks to provide it.

Available today on Xbox One, Xbox Series X|S, PS4, PS5 – with a Nintendo Switch drop happening in 2023 – Terror of Hemasaurus has previously rocked up onto PC to rather decent acclaim. Now it’s time for Xbox and PlayStation folk to begin to understand what all the fuss is about.

Terror of Hemasaurus was put together by Loren Lemcke (they previously behind Super Blood Hockey), before being picked up by the Digerati team to ensure as wide a range of player as possible can enjoy the smashing and bashing it allows. It has you playing as a gigantic monster (as if you hadn’t guessed already), as you look to wreck havoc on humanity, smashing things up as you go.

There is next to nothing that can stand in your way in Terror of Hemasaurus; building can be razed, helicopters slapped up, humans scoffed and cars kicked. Causing carnage however you see fit is your one sole goal.

PPlaying out as an action arcade affair, you can take in Terror of Hemasaurus alone or with up to four players in total – we’d hazard a guess and say that multiplayer city crashing will be a ton of fun.

In all the key features include:

Keep an eye out for our full review but should you wish to get involved for yourself then pay a visit to the Xbox Store and pick up an Xbox One or Xbox Series X|S download for £12.49. Terror of Hemasaurus is also on PlayStation and PC (through Steam), coming soon to Nintendo Switch.

Earth is on the brink of a climate catastrophe! The Church of the Holy Lizard hatches a dubious plan to save humanity from its own reckless disregard of the planet – unleash a monster to kill, destroy, and inflict terror! Embark on a rampaging trail of total devastation across multiple stages as one of four recently defrosted monsters. Roar with delight as you stomp terrified citizens and pulverise buildings in an apocalyptic, retro arcade blast of awesome monsters, satisfying destruction, and farcical fatalities! Terror of Hemasurus is the latest game from Super Blood Hockey creator, Loren Lemcke.

I can’t believe Age of Empires 2 is playable in a browser
TheXboxHub Official Podcast Episode 150: Xbox and Bethesda Developer Direct
God-Punching MOBA ‘Smite’ Teams Up With Magic: The Gathering For Crossover Event
HBO renews The Last of Us for a second season
Version 2.9.0 of N64 Switch Online app fixes boss fight from Yoshi’s Story