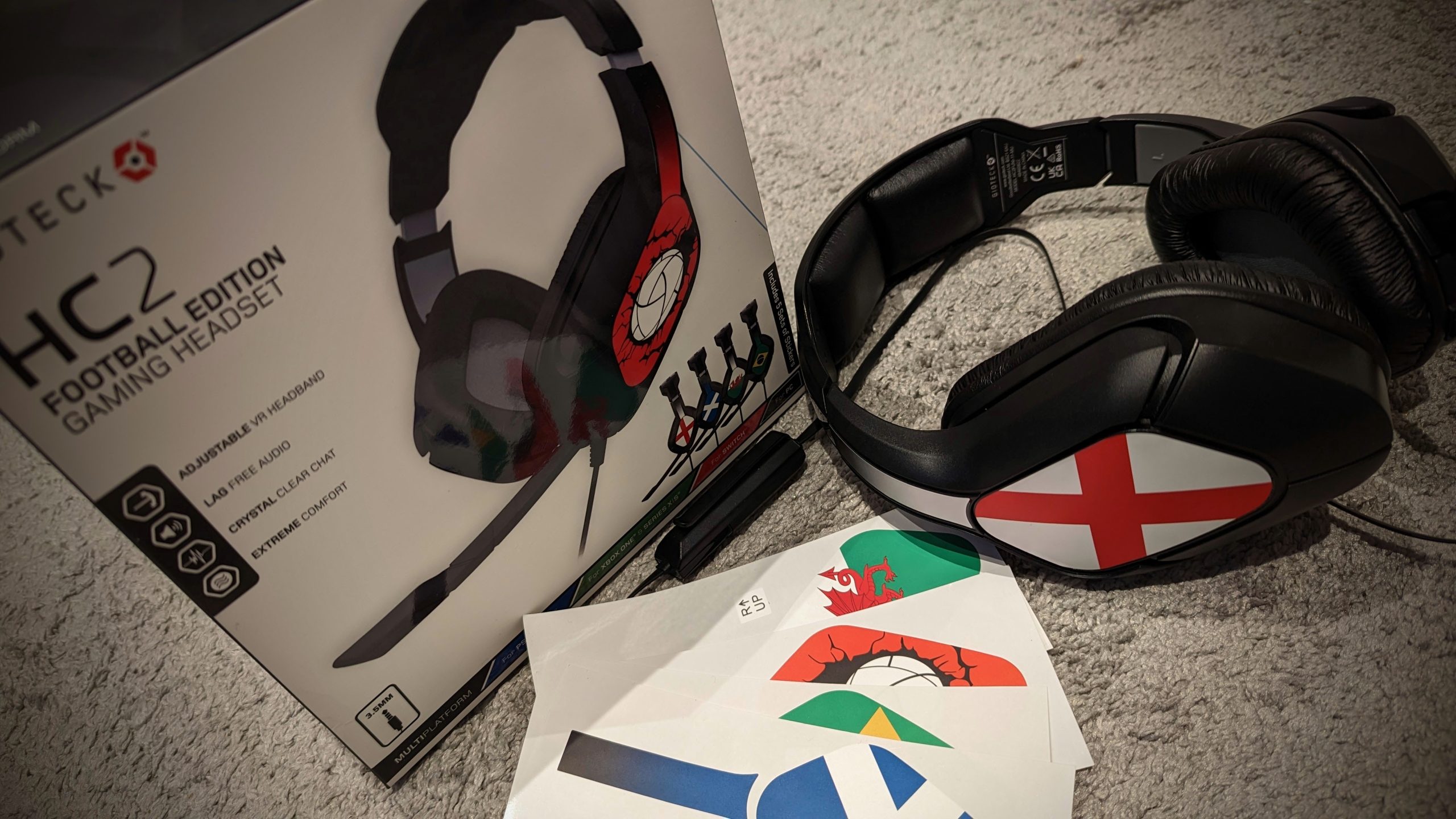 What do you want from a gaming headset? The opportunity to run multi-platform, taking it from mobile to Xbox, to PlayStation and even PC worlds? Do you want it to be wireless? Feature rich? Great looking, perhaps? What if you want it to be able to help you express your undying love for your favourite international football team?

Well, the Gioteck HC2 Football Edition Gaming Headset doesn’t do anything fancy. But it will tick the football love-in box. We’re not really sure that’s much of a selling point though, not even when you take into account the £12.99 asking price.

With the Qatar World Cup front and centre of the 2022 footballing calendar, we guess you can’t blame Gioteck too much for trying to cash in on the hype. But rarely have we ever considered a gaming headset purchase based on the opportunity to slap some international team colours on the side of our headset. That really is the only real selling point of the HC2 though. And even then, it’s not done in a particularly great way.

We’ll cover that football angle first though and straight out of the box the Gioteck HC2 Football Edition Gaming Headset is an all-black affair, extremely plastic feeling with little to nothing of note in regards the aesthetics. In fact, aside from a shiny Gioteck logo on the top side of the headband, this is bereft of anything.

It’s here though where Gioteck worm in our love for football and if you’ve ever wanted to express that love through a headset, a number of stickers allow. We’ve got a Brazilian sticker, we’ve got some for English fans to scream over and those who like a man-bun can get all Welshed up and pretend they are Gareth Bale. It’s those stickers that represent three nations competing at the Qatar World Cup 2022, but just so our Scottish friends aren’t left out, we’ve got a version of the Saltire too. Oh, and there are some generic black and red stickers for those who, we guess, don’t even like football.

The stickers come in left and right variations and peel off a backing strip to then be placed on the headset itself. We’re English, born and bred, so it goes without saying that we’ve slapped the St George’s flag on our HC2’s. In fact, we’ve got little interest or intention of sticking other country colours in their place. That’s a bit of luck too, because once you’ve slapped the flag and accompanying strip colours, they remain pretty much stuck. We’d not advise removing them multiple times at least.

Honestly, we can’t help but think that this feels like a bit of a cheap cash-in by Gioteck and whilst the idea may be an appreciated one by some of the younger gamers out there, we’re not overly keen on the implementation. Would it have been much more expensive to do away with stickers and utilize some kind of magnet system instead? Probably, but it would have been a hell of a lot better.

Perhaps the majority of gamers will think similar to us though; one country will be all they need to adorn their HC2. And in that regard, it’s all cool.

The problem is, the rest of the Gioteck HC2 Football Edition Gaming Headset package isn’t one that is of massive interest.

In fact, this is a pretty standard, very generic headset, one that plugs into various platforms and formats via a 3.5mm jack. That means it works with Xbox One and Xbox Series X|S consoles, with PlayStation, Nintendo Switch and PC. It’s also compatible with mobile devices.

It’s not helped by that extremely plasticky feel. There is scratchy plastic all over the place here, and some sharp edges that pop up as the adjustable headband is manoeuvred to size. There’s not an awful lot of padding under that headband either.

The earcups are okay, at best, diamond shaped and fitting over the ear with ease. There’s some fine padding on those too, with a pleather-like covering and just enough cushioning to ensure you can – if you must – wear them for a few hours at a time. The drivers inside just about do the business too, delivering okay sound. Again, nothing fancy, but capable of getting you through a few gaming sessions without issue.

From there, a detachable mic provides party comms, attaching to the left cup. There is however absolutely no flexibility in this mic – again a slab of plastic that sits in front of your mouth at all times. It’s quite off-putting to be honest and we’d kill to be able to flip that up and out of the way for when it isn’t needed. But it allows for some okay voice transmission, so shouldn’t be slated too much.

All that is left is the cable which is permanently attached to that left cup, running down and ending in a 3.5mm jack. It’s this cable which houses the only volume controls, in-line on the cable, with a small – very small, too small, in fact – volume dial and mute switch. We don’t need to tell you what they do.

So, the Gioteck HC2 Football Edition Gaming Headset? A football cash-in or a decent gaming headset that should be on your consideration list? Well, this is far removed from that latter shout and can only really be seen as the former option – even then, the tie-in with the beautiful game isn’t one that is done particularly well.

Reflected in the £12.99 price, the Gioteck HC2 Football Edition Gaming Headset will only appeal to the biggest football-loving gamers. And even then, that’ll be at a push.

Huge thanks go out to Gioteck for providing us with the Gioteck HC2 Football Edition Gaming Headset for review. Grab one for yourself from somewhere like GAME.