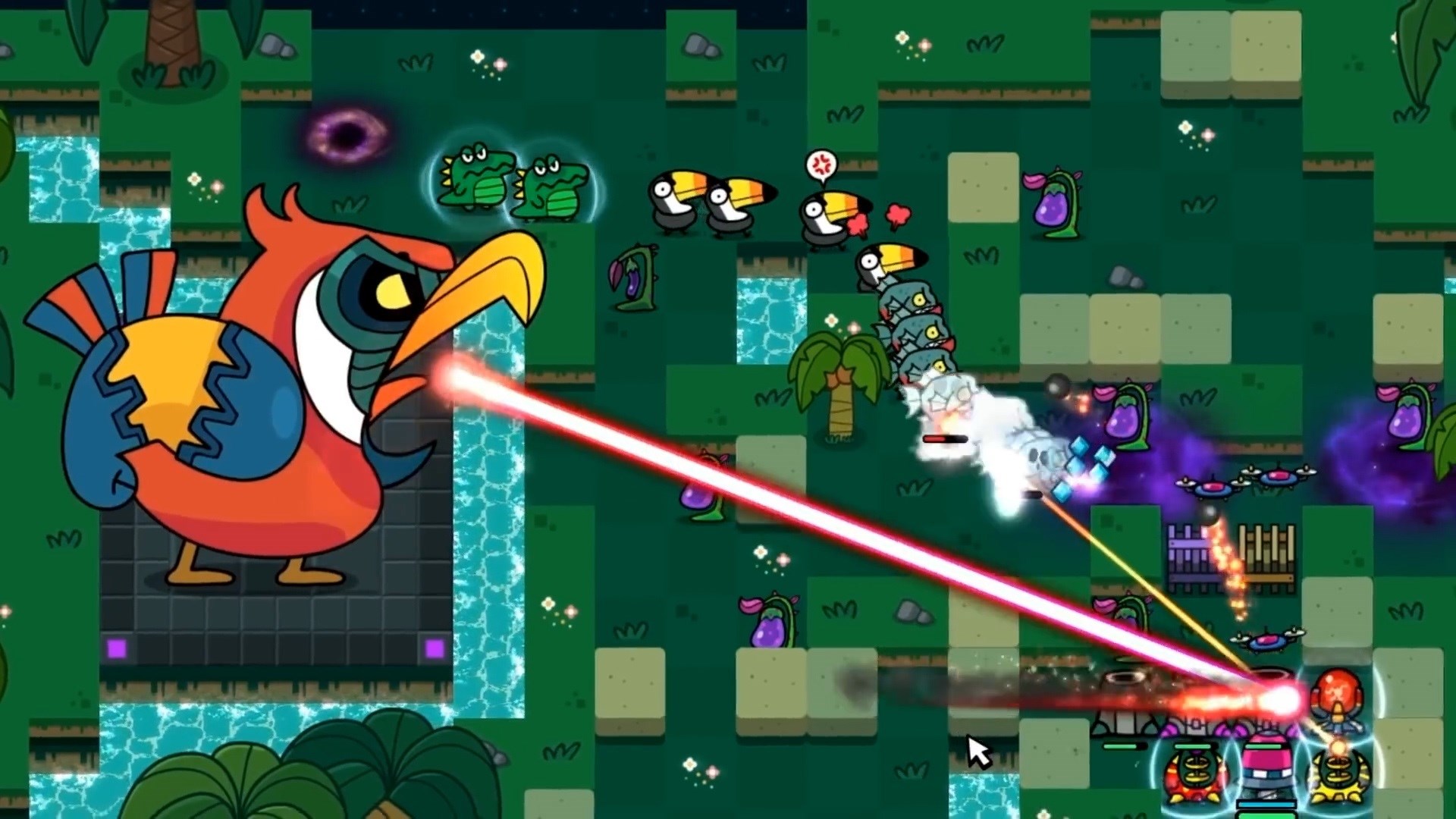 There’s something that tower defence games offer that you can’t get anywhere else. It’s the moment after you’ve slogged through wave after wave, barely alive and your towers ragged, when – suddenly – you’re ahead of the curve, and you can sit back and do nothing. You’ve constructed enough defences that nothing can brooch them. You’re invincible, and it’s down to your planning, composure and ability to upgrade towers at speed. That feeling of weathering the storm is the absolute business.

Broken Universe – Tower Defense delivers on all of these feelings. It knows all the nuts, bolts and scrap metal that’s needed to construct a satisfying tower defence. When you’re in a level, fighting to stay on top, Broken Universe is a fantastic example of the genre. But there’s a problem: Broken Universe doesn’t stop there. It keeps slapping on extra, unwanted nuts and bolts until the resulting structure is so top-heavy and unwieldy that it’s more of a jawa sandcrawler than a formula-one car.

You are shown a simple grid. A magical portal sloshes about in the corner of the screen, and you get a bemusingly large number of squares in which to drop down your base. There’s a lovely mechanic at play here, since you get more rewards at the end of the level depending on the proximity to the enemy portal. Stick your base a few squares from the portal and you’ve got an increased difficulty, but also a motherlode of rewards should you complete it. We will freely admit to YOLOing, sticking the base next to the demon portal, and then dying near immediately. The tail would go between our legs and we’d start at the other end of the arena.

As you’d expect, the enemies don’t immediately start trundling over to your base. You’re given some time to start placing towers, and the cash starts rolling in automatically and immediately. In most cases, you will have a few towers, near-fully upgraded by the time the first crocodile or penguin cruises up to your base.

The paths the enemies take are complicated, and we will admit that we still don’t fully understand the dark magic behind it. You see, the enemies will always take the easiest route to your base. Stick a blocking tower down, like the walnuts in Plants vs Zombies, and the enemies are most likely to bypass it via another path. So, what happens then? Stick more blockers down, and what will the enemies do then? It’s not always easy or possible to tell (we think that the enemies default to their first path when all routes are blocked), yet it’s such an essential part of mastering Broken Universe – Tower Defense.

But the rest of a given siege is great fun. Each tower can be upgraded three times over, and the improvements are noticeable. You can manage the flow of enemies, creating a mosh-pit of death where all your guns are firing in a single spot. Alternatively, you can split the enemies up, sending them the long way round to your base, as you nibble at them over time. But watch out for the hulking minibosses, who sponge your bullets, making slow progress to your base.

There’s an asterisk here: we fell into the same patterns too often. Broken Universe – Tower Defense leans into the minibosses so frequently, that the only real approach is to stick up walls and fire from behind them. That’s not the end of the world, as there’s still strategy in variance in that approach, but we’d have loved to adapt more. What would a level have been like if blocking towers were banned, for example? How would we change our approach? We rarely had our versatility challenged.

Every so often, a big, end-of-world boss appears, and – again – there’s the vague sense of an opportunity missed. They certainly look great, being giant animals who loom over the arena and instil a sense of panic. But they’re nothing more than weather, really. They occasionally cause global effects, like damaging, slowing down or stunning your towers. You can’t attack them and they can’t attack you, at least not one-on-one. It’s all a bit of a shame.

But overall, we’d move our thumb to the upright position. This is a simple, fun-first approach to tower defence that pulls off the most difficult of tricks: it’s simple to learn and hard to master. And you’re certainly rewarded for mastering it. If you end the level with a large stash of coins, you get increased rewards for being so stingy. So, there’s plenty of reason to replay, and even more reason to get good.

But alas, if only everything in Broken Universe – Tower Defense was easy to learn, hard to master. Because it all comes undone in the menus, and in the moments between battles.

Problem Number One is that Broken Universe – Tower Defense feels like a port from mobile. It prefers the approach where everything you can do in the game is presented, on screen, at once. Want to look at all your turret options? Here’s all of them in one at-a-glance menu. Now, just tap the one you want! Oh, wait, you’ve got a controller in your hands. Um…

Broken Universe – Tower Defense never adapts to Xbox and a game controller. Choosing a turret, moving it into a free slot and then upgrading it, is such a blizzard of befuddling button presses and UI confusion that we gave up. Sometimes you move with the left analogue stick, other times the right. Sometimes you’re tabbing with the LB and RB buttons, other times it’s the sticks. And the UI will flash in multiple places, clamouring for your attention, like you were sitting at a one-armed bandit in Vegas.

Problem Number Two is that there’s so much frippery. To be fair, there are options and menus that do improve Broken Universe – Tower Defense: you can upgrade your turrets, and slot in mods that give them a personalised touch. That’s great, and you can feel, bodily, how powerful they are. But elsewhere, there are simply too many ways to minorly adjust your battles, or slightly differ how you play, and we couldn’t help but think that half of them could have been edited out. Tear out so much of the junk, and there would be a lean, mean tower defence machine beneath. But this is astonishingly stodgy and unwieldy, and even playing a game can become a farce.

There’s a charming, tactile little tower-defence game here somewhere. But you have to play pass-the-parcel to get there, tearing off layer after layer of poor controls, shoddy UI and innumerable game modes to get there. On PC and mobile, we suspect that Broken Universe – Tower Defense is bordering on a must-buy. On Xbox, we’d suggest it’s one to bypass.

You can buy Broken Universe – Tower Defense from the Xbox Store

North America: UNO is the next Nintendo Switch Online Game Trial
Puzzle-strategy mashup Backbeat is coming to PS5 and PS4, demo available now
Steam Base Building Fest is almost over – get in on the deals and demos while you can
Empire of the Ants unveiled for 2024 release on PC and console
The Evil Within’s Creators Made A Colorful Rhythm Game And It’s Out Today