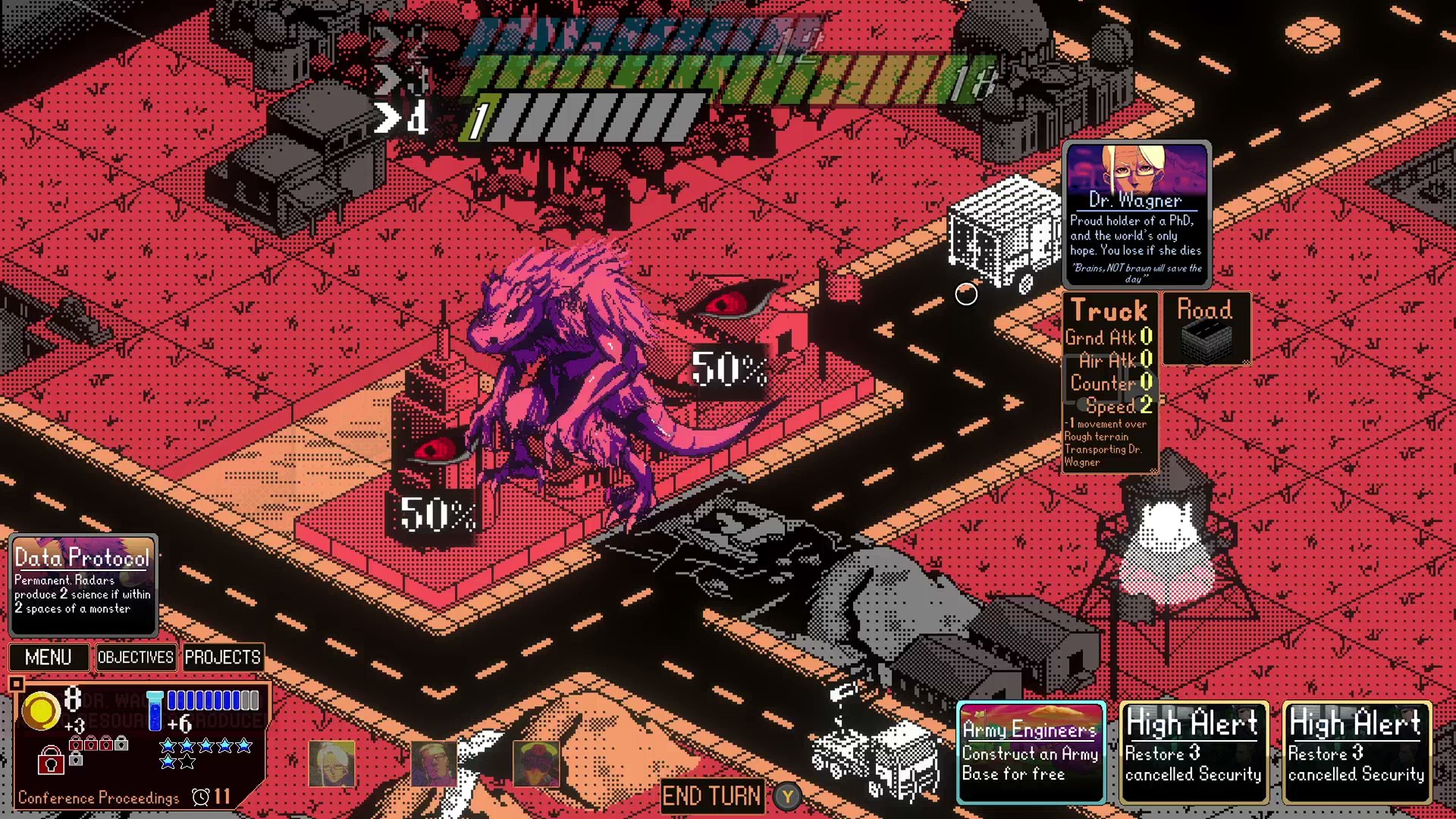 We’ve played plenty of games that are in love with hulking great kaiju. Rampage, Dawn of the Monsters and War of the Monsters spring immediately to mind. But Godzilla, Kong, Ultraman and the rest – at least to our memory – have never been airlifted into a turn-based strategy game. Which is a wonder, because there’s no better genre for zooming out, taking in the full scope of a city, and then feeling the daunting, turn-by-turn approach of a giant lizard. Then it arrives, tearing into buildings that you were relying on for resources. Turn-based RPGs were made for this.

Kaiju Wars arrives with swagger. Its art style is unique, looking like a flipbook made from Mac printouts circa 1989. It gives Kaiju Wars an inherent retro style, taking us back to when Godzilla movies were at their peak. But it’s far from ugly, as everything is crisp and clear. Then you move into the campaign’s menus, and everything is laid out like a comic book, with mixed-media cutscenes – some real actors, some visual novel chatty bits, some faux newspaper scribbles – that give the impression of a B-list movie gathering together any footage it can use to tell a story. It’s perfect.

The story is scattershot but a lot of fun. Kaiju are rampaging around because humanity keeps nicking all the best resources. This pits four kaiju – the King Kong one, the furry-Godzilla one, a flaming phoenix and a weird seahorse-thing – against industrialisation, and your task as mayor is to defeat the kaiju, or outlast them on the battlefield, so that your researchers can construct counter-measures.

It’s all a very familiar stocking in which Foolish Mortals Games stuffs treats. Like an old-school Command & Conquer title, you’ve got loads of mouthy enemies and allies to listen to, as they bicker and try to offer advice. The tongue is so firmly in the cheek that it’s made a hole to wiggle through, as everything is referenced and namechecked. We also love the fascination that Kaiju Wars has with open-text customisable names. You can name virtually everything, from the kaiju to the units, your characters and even your own speeches. More than once, we got defeated by a giant Geoff, after he chomped his way through our Razzledazzle Tanks.

If you’ve played Into the Breach, the levels will have a tinge of familiarity. These are isometric levels that rarely span much more than the game screen. In almost every instance, you start with a lab that contains Dr Walden, your super-scientist, and you must protect her at all costs. Commonly, there’s another objective: to last a certain number of turns (commonly translated into ‘Breakthroughs’ – a research bar that fills up turn after turn), or to defeat the incoming kaiju.

There are two resources that you will care about in Kaiju Wars. Dr Walden’s lab, and the other labs and offices that pimple the environment, generate Science every turn. The more Science you produce, the quicker you will complete your objectives and move onto the next level, so it’s imperative you keep them pristine. Towns and villages, however, produce Cash, and this pays for units on the battlefield. You’re going to need units to at least slow down the kaiju.

Then the kaiju rises, and it only has eyes for your buildings. It travels to the nearest one, so your Cash and Science generation are immediately threatened. With each building destroyed, a ‘Security’ level lowers until there is a ‘Breach’, and this is when the kaiju stops attacking randomly and instead knows where Dr Walden is hiding. It’s at this point that you should probably evacuate Dr Walden and shuttle her to the nearest (albeit not so near) laboratory to continue her work. If she’s between laboratories, there’s no Science for you.

The wrinkles come in the form of Project cards, a deck of events that you can – on occasion – build yourself, and draw three per turn. Pick one of the three, and that event will trigger, allowing you to generate stacks of cash, immediately place units for free, or start work on a longer-term project: a Gundam-style mech-ship, perhaps, or a giant ‘mazer’.

It is, if we’re being honest, a bit much to start with. Kaiju Wars does a decent job of staggering the mechanics and trying to introduce them well, but there’s a central issue that it can’t resolve: to play Kaiju Wars optimally, you have to think differently from other turn-based RPGs. And we’ve played enough X-Com and Final Fantasy Tactics to have fallen into some bad habits.

For example, collateral damage is expected, and sometimes even a benefit. Often, you will be constructing buildings simply to guide the kaiju away from your more lucrative labs. The same goes for units. Because the kaiju often have insta-kill mechanics, it’s often best not to attack them directly. Instead, leaving a tank or fighter in Godzilla’s path will act like a tripwire, dealing damage and slowing them down. You’re sacrificing pawns in the hope that they will finally topple their queen, and that’s atypical when compared to games like Fire Emblem, where every troop is treated as a precious resource to protect.

We will admit that we disliked Kaiju Wars at first. We hadn’t understood what it wanted from us, and we were playing it far too conventionally, getting a pitiful single medal for completing each level, if we completed it at all. But once we jived with its approach, understanding that defense is often the best form of offense, we fell in love with the big old lug.

Kaiju Wars knows what it’s doing. It’s so comfortable with its ingenious structure that every level tests something new, or changes the rules completely. A level gives you no units at all. Another gives you no cash. Two kaiju turn up at once, then three. A kaiju attacks a jungle, setting fire to all the trees behind it. And though there are only four kaiju to fight, their abilities and the methods of defeating them change with the level too.

Once you unlock the secret of the level, then you feel like Sun Tzu riding on Napoleon’s shoulders. You’re a tactical genius, and nothing the kaiju can do can stop you. You’ve got it hemmed in, eating out of your hands like it was a guinea pig.

Kaiju Wars will have its detractors. Most of those will have given up on the turbulent opening levels. The rest will find its randomness distasteful, which is more understandable. When you’re chasing medals (essential if you want to upgrade your troops and lock in the best researchers), randomness can let you down. You will be relying on a card to turn up in the Projects deck, or a kaiju’s fifty-fifty decision, and that can be frustrating. But if your success was riding on that, you were probably doing it wrong.

Pacific Rim by way of Into the Breach is an elevator pitch that gives us goosebumps. And Foolish Mortals Games delivers with Kaiju Wars, creating a simple but improbably deep turn-based RPG that captures the thrill of a Godzilla attack. If you’re allergic to randomness, you might want to temper your enthusiasm, but everyone else will find they are in strong, scaly hands.

You can buy Kaiju Wars from the Xbox Store